Launched in May 2018, mod.io is a powerful mod API for game developers to tap into the creativity of their playerbase. Take control of your mod community on all platforms and stores, to ignite a world of possibilities. Interested in mods and finding out more? Get started now or reach out to chat about our solutions for indies and big studios.
RSS Editors Choice - Mod of the Year 2018

QC: Doom Edition is a mod that brings the weapons from the latest Quake game, into Doom, with delicious pixelated flavor. More than just weapons, it also brings the “Champions” mechanic -- different player classes, each one with unique status, speed, active and passive abilities.

A mod which takes a previously-existing modification and upgrades and enhances it for 2018.

An unofficial remake of a singleplayer mod "Azure Sheep" for Half-Life 1. With great exclusion, everything that does not correspond to the canons of the original game will be cut out. Demo is OUT!

A crossover mod and toolkit featuring the mechanics and play style of Spyro the Dragon ... I thought about several things I could do like making a fan game in a engine like Unity or Unreal, but I've always enjoyed using Goldsrc and Xash3D so I thought about the challenge of getting this purple dragon into Half-Life. And from there the mod pretty much came to life.

Total Chaos is a total conversion mod for Doom 2 that runs on the GZDoom source port. The mod is a survival horror set on a remote island known as Fort Oasis. The island was once run by a community of coal miners which one day suddenly disappeared, leaving behind the abandoned concrete jungle to waste away.

Star Trek: Armada III - The Final Frontier begins with the first stirrings of the Dominion War and allows players to take command of five unique factions, the United Federation of Planets, the Klingon Empire, the Romulan Star Empire, the Cardassian Union/Dominion Alliance, and the Borg Collective. Explore strange new worlds, seek out new life and new civilizations, and boldly go where no one has gone before.

For: Day of Infamy

A mod which, though not yet released, has spent 2018 building incredible anticipation for it

is growing a great community and we look forward to seeing what's to come in 2019.

One of the last human survivors, you find yourself stranded on an uninhabited island. With a few other victims of the crash, can you craft, mine, and build your way to survival? Aground was designed around the theme of Progression, and inspired by Utopian Mining and other mining/crafting games. You start out with almost nothing, and you can eventually build your way up to a thriving settlement. 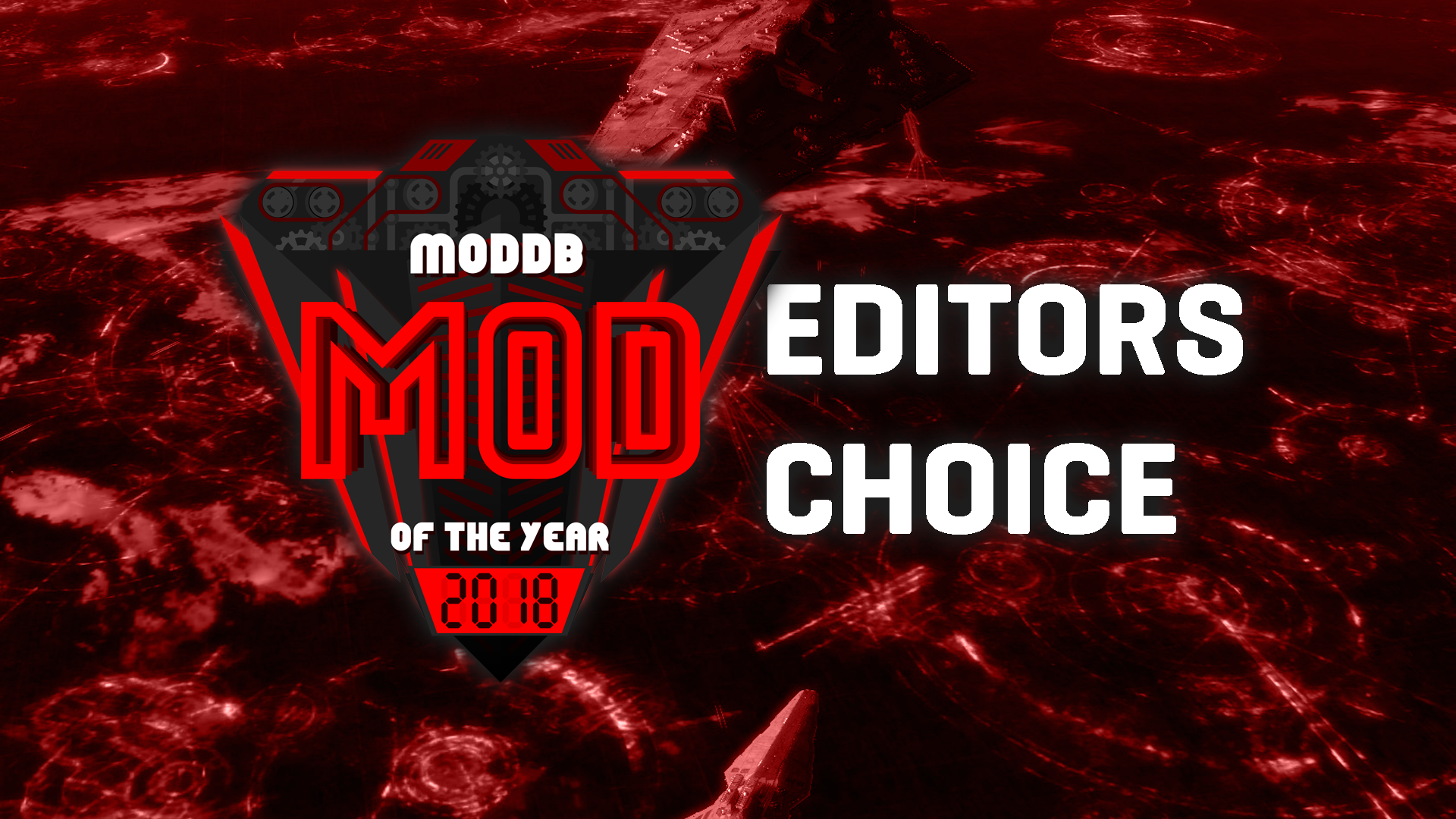 Congratulations to our 2018 Editors Choice winners!

Thank you for hosting New California for the past decade! :D And sorry for taxing your servers to the limits last October, haha!

We've got two more builds before 1.0, then it's off to IndieDB to start full time on our new IP. We'll see you on the green side next year.

Really happy to make the editors choice!!! Thanks a bunch!!!

sorry, but a mod that just copy content from other games is the winner of best MULTIPLAYER mod? WTF was that?!?! with all the respect to the modders involved there's NOTHING NEW there to win such category, specially when have so many AMAZING MP mods in the TOP 100 to choose! the "winner" didn't even was listed in the highlights of the year??? there's 20-30 a lot better options such as @[Sins of the Prophets](mods:halo-sins-of-the-prophets:11043) & @[Frontlines FOREVER](mods:frontlines:10677) (my winner for sure!), should be better give again to @[Forgotten Hope 2](mods:forgotten-hope-2:5480), which is still amazing. was für ein witz

QC:DE has been developed for around a year now and with such a short amount of time it has been able to bring a gameplay similar to the one from Quake Champions and been able to port this gameplay into Coop/SinglePlayer with support for thousands of campaigns, easy support for custom monster packs (I know nothing about programming and I was able to make two monsters packs for this mod), it also has his own original soundtrack.

QC:DE is a mod built under a really limited sourceport called Zandronum and even with these limitations it brings a lot of fun with original content as well: original champions with their well written and amazingly done lore for each champion, upgrades for the weapons on PVE, custom monster packs, original deathmatch maps and remakes of Quake's maps, excellent artwork and all this done and directed by only a handful of people that are making all this without making money from this.

That's the point he state, really nothing new, you just signed what vnx said. I know was a great work with lots of work without making any money, but was also to everybody else no? but it doesn't matter now, the results will not change even if everyone agree with him. Congrats for your mod.

My batt is burning like Hell. You claim, but just didn't even try QC:DE and Quake Champions!

Thanks for the spot! Feels very good to finally bag an award after working for so many years on WW1: Source and Screaming Steel, and a pretty unique award at that!

Thank You so much for having ReWired in the Editors Choice!

Congrats to your mod team you deserved the top spot kudos!

Really, no Half Life Echoes? Ah, well. Its still great that QC:DE, Total Chaos, Year of the Dragon and Black Mesa: Azure Sheep are winners! Congrats!

This is just the editors choice, and not the vote based one. It could be in the top 10 for the "voters choice" one.

you recognise that this is the editors choice and not the player's choice right?

that is even worse

Congratulations on the win Thaiauxn. You and your team deserve it.

Article is fixed, sorry about the hassle!

The only thing i respect about this "editor's choice" is the fact that finally ReWired got some well deserved resounding love.