The Empire of Tamriel is on the edge. The High King of Skyrim has been murdered. Alliances form as claims to the throne are made. In the midst of this conflict, a far more dangerous, ancient evil is awakened. Dragons, long lost to the passages of the Elder Scrolls, have returned to Tamriel.

The future of Skyrim, even the Empire itself, hangs in the balance as they wait for the prophesized Dragonborn to come; a hero born with the power of The Voice, and the only one who can stand amongst the dragons.

The next chapter in the highly anticipated Elder Scrolls saga arrives from the makers of the 2006 and 2008 Games of the Year, Bethesda Game Studios. Skyrim reimagines and revolutionizes the open-world fantasy epic, bringing to life a complete virtual world open for you to explore any way you choose. 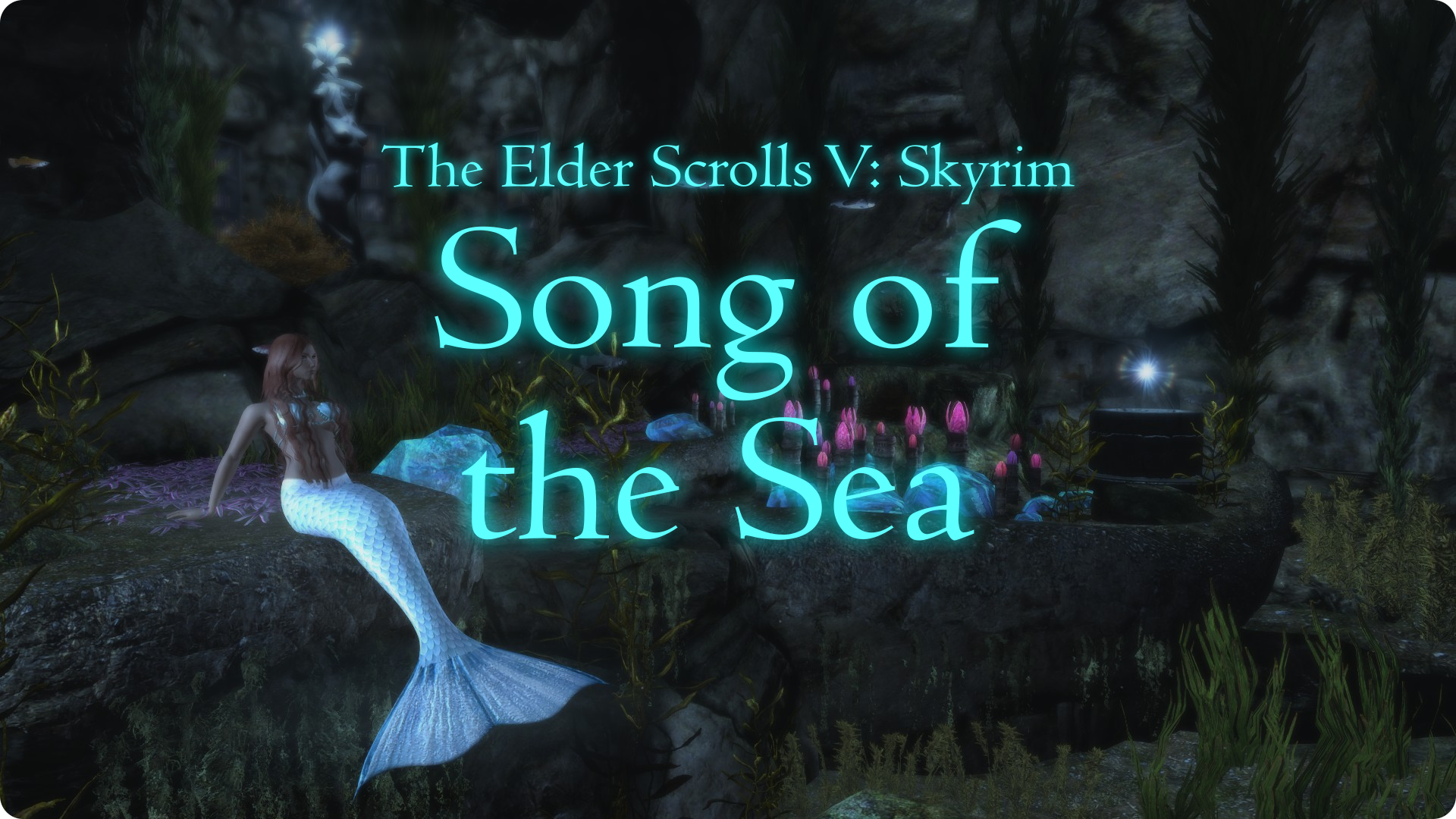 Song of the Sea is a siren-themed small-DLC sized expansion for the Elder Scrolls V: Skyrim.

Engage in a character-driven, lore-firendly questline featuring new locations and a new worldspace to uncover the mystery and power behind the sirens of the Sea of Ghosts.

Gain the ability to become a siren yourself - will you choose to be a nature-loving mermaid, a hardened siren warrior, a powerful hydromancer, a deadly and seductive siren, or anything in-between?

Player experience is extremely important. Too many Skyrim mods require the player to constantly flit through menus or perform unusual actions in order to engage with their systems. This is why I've been hard at work creating a siren skill leveling system that works just like any other skill in the base game - including UI notifications and sounds. That's right - you gain experience for your siren skill by performing actions while in siren form and using your siren abilities. Not only that, but I've been designing an entire brand-new siren skill perk tree, filled with dozens of immersive perks that provides so many options that it actually supports different siren builds. Choose to be a hardened siren warrior, control the water itself as a mystical hydromancer, commune with sea life as a nature-loving mermaid, lure foes to their demise as a deadly seductress, and more. The end result is something that feels shockingly close to being part of the base game, is deep enough to support entire siren-themed playthroughs, and will keep you coming back for more.

(Note that the images below are not final and will be improved upon before release.)

Naturally leveling up is great, but it doesn't mean anything unless you get some cool new stuff to play with. That's why I've been working on a a plethora of new siren powers and abilities.

Most of the passive abilities focus on giving you useful bonuses when in the water while in siren form, such as faster swim speeds, enhanced water jump height, increased health, magicka, and/or stamina regeneration rates, making sea life passive, and more. The goal is to make a siren character feel "at home" in the water and actively want to seek it out.

My goal with the siren powers to add new, useful, and unique water-based powers that aren't just re-skins of existing spells or powers. Most of these are only usable when swimming in siren form, but they are designed to compliment a siren's abilities and enhance siren gameplay in immersive and creative ways. Lure prey with your Siren Song, blast back enemies that got too close with Hydroshock, emerge unseen from the waves using Refraction, light up the sea floor using Bioluminescence, summon a school of slaughterfish to defend you, forcibly pull your helpless foes into the depths with Undertow, summon a rideable crab to help you traverse land, release the kraken upon your enemies, and more.

This was a mid-milestone update since I just added this project to ModDB. I will continue to work on the siren powers, abilities, skill tree, and leveling system. Another update will be posted when these portions are complete.

If you are interested in this mod, be sure to check out the main mod page for a general overview, preview of the epic underwater player home, Siren's Rest, and ways you can support and contribute to the mod!

Thanks for reading!
-Delta 6

Today we are showcasing the work that goes into remastering the assets, environments and interiors of Oblivion for the Skyblivion project. With that said...

A development update and showcase of what we've been up to since our last devlog, a new story short, Body of Nir, as well as exclusive first details on...

It's been a good little while since we gave ModDB an update on the status of Cathnoquey, so here's a small peek at what we've gotten done in the last...

This tweak will add smelter recipes to the Legendary Skyrim Crossbows mod. Based in version 3.2.

This tweak will add smelter recipes to the Skallagrim’s Armory mod. Based in version 2.0.

This tweak will add smelter recipes to the Animated Armoury mod. Based in version 2.2.

This plugin will allow you to make flawless gems, as long as you have a jewelry kit in your inventory.

Hi this mod is for trans people to be trans and gay, it makes the chest of the character that normally has boobs flat and gives them a binder im trans...

Skyrim is what Elder Scrolls is supposed to be. Gone is the flowery sunshine of Cyrodiil, and instead we get cold, barren Skyrim with snowstorms and people and environments that could really fit into the Middle Ages or a natural Fantasy World. As a person who's been modding ES since Morrowind and playing since DAggerfall in 1996, I can only see this game as a natural and excellent heir to the series. Take it from me - Skyrim is Greatness!