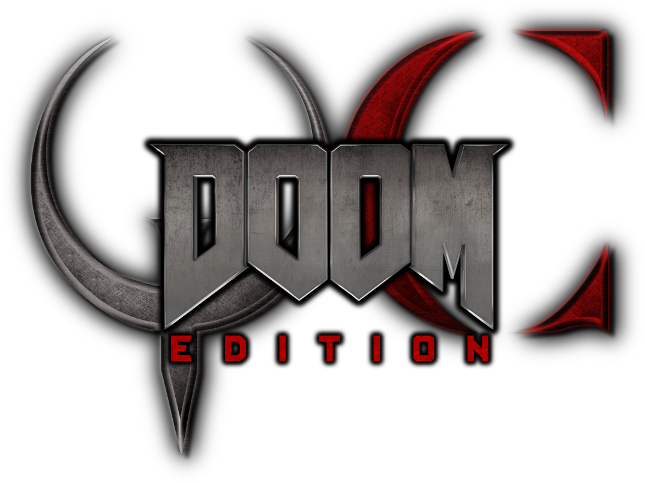 Sometimes the world doesn't need another hero. It needs a monster.

A mod by DBThanatos & Michaelis

Based on the game Quake Champions by id software
Store.steampowered.com

“QC: Doom Edition” is a mod that brings the weapons from the latest Quake game, into Doom, with delicious pixelated flavor. More than just weapons, it also brings the “Champions” mechanic -- different player classes, each one with unique status, speed, active and passive abilities

The 7th duel tournament, this Saturday!

Did you know that the primary point of balance for any of the champions, is trying to making sure they're balanced for duel. Duel is such a tremendously competitive mode, where every aspect of a champion gets exploited to the max, to get an advantage over your adversary.

As such, we're always very interested to see how players adapat and use the tools they're given in this mode, and having anothe duel tournament is a win-win-win

Developers win: By learning how the players use these tools, and finding the real bad exploits

Players win: By reaching top 3 in the tournament, they win $$$

Viewers win: By having a show to watch!!

So, in whichever category you belong, you're winning! Sign up to the cup on the link Challonge.com

See you on the arena!

There's a new update coming, and it's coming with a new Champion this time. I guess the 30th wasn't the last after all. We couldn't help ourselves.

We just released a small upadte to the mod. It consist mostly of rebalance and bugfixes, in anticipation of the upcoming tournament.

Version v2.5 of the mod is upon us. Get ready for the 30th champion.

QCDE with the new Q-Zandronum engine, ready to extract and start playing! No need to download many files. Just this one link to rule them all!

This download contains all files you need to play QCDE "out of the box" for Deathmatch games. However, we still recommend to acquire the original Doom...

**UPDATED TO v2.7** "QC: Doom Edition" is a mod that brings the weapons from the fantastic id software "Quake Champions", into Doom, with delicious pixelated...

An optional addon by Ivory Duke and Barbarossa which replaces all of the QC:DE pickups' sprites with voxel models.

An optional pk3 file containing "HD" portraits for all champions. Updated to v2.7, containing The Intruder (AKA Dusk Dude).

AeonDM is the Cacoward winner mapset made by the Mechanix Union, presenting 33 beautiful maps that fully use 3d floors. AeonQCDE is a modified version...

Good day. May I ask which difficulty is most fitting for single player and what does 'mobile difficulty' mean? Thank you.

Every mod is compatible with Delta touch. XD😁

Is there a way to get upgrades and other singleplayer stuff working in multiplayer? I don't see why they disallow any form of upgrades in multiplayer

Is there many players on the servers? Or is it all bots?

I'm sure you've been asked this before, but I'd love to know if there's any standalone monster packs/themes like QCDE has? I'd love to have the Quake 1-4 monsters in a game. I love fighting Strogg!

I have a few suggestions for some new champions (please suggest more in the comments):

Ripley from Alien. Special Ability: Grants access to a flamethrower.

Solid Snake from MGS. Special Ability: Grants access to a grenade launcher (each round regenerates every 10 seconds).

Samus Aran from Metroid. Special Ability: Changes into her morph ball and is able to lay bombs for 30 seconds. Alt fire is a dash and can boost her speed.

Thanos from Marvel Comics. Special Ability: Grants access to the Infinity Gauntlet and can kill 50% of all players in a server (eliminates half of the enemy team in Team Deathmatch).

Agent 47 from Hitman. Special Ability: Grants access to his Blaser R93 and can fire bullets that ignore armor.

Scorpion from Mortal Kombat. Special Ability: Fires a chained kunai that pulls a target towards him.

Master Chief from Halo. Special Ability: Calls Cortana to send a supply drop in the map that contains ammo, armor, and health (maybe even an hourglass or two).

Cloud from Final Fantasy 7. Special Ability: Grants access to his Buster Sword and can kill enemies with a single slice.

Goku from DBZ. Special Ability: Uses a Kame-Hame-Ha and fires a gigantic projectile that, while slow, does insane damage.

D.va from Overwatch. Special Ability: Calls her mech, allowing the player to fire in a spread and fly.

Booker from Bioshock. Special Ability: Injects a plasmid that allows you to fire electricity that temporarily stuns opponents.

I agree a lot with some of the characters you mentioned. speaking of master chief. it would be better if they add "The Arbiter" since his ability is active camouflage like nyx's or to "sgt johnson" as he is a powerful and skilled marine, or we also mention one of the "ODST of the Alpha-Nine"

and the bioshock we have for example "Jack" or "The Subject Delta" or "Eleanor Lamb" Jack can't imagine what his special ability would be. but delta if it occurs to me that his ability is the plasmid Electro Bolt 3 or Incinerate 3 and that his weapon is the drill or the rivet, and Eleanor the ability she would supposedly have would be her speed to run and throw the fireballs like the other big sisters

another idea to add "Shao Kahn" since he is very powerful. and his ability is to throw a hammer or a spear