If it's information about Mod DB and ramblings about mods in general that you are after - then you have come to the right place. Welcome to the official Mod DB BLOG, watch this profile to keep updated, join to show your support.

Mod DB is the world's oldest video game modification community, proudly serving millions of readers monthly who seek creative new gameplay experiences (user generated content). Our aim is to unite developers, players and their ideas, empowering them to shape the games we play through mods.

In 2018 we welcomed mod.io to the family, an API for game developers that automates the download and management of mods in-game. It is the next step in our evolution - and a powerful tool that makes modding far more accessible and impactful for games across all platforms and stores. With the combined reach and influence of mod.io and Mod DB, we aim to usher in a new wave of creativity powered by the players.

With version 4 we are turning the power up to 11, with the aim of being the best site for players to find new ways to game, and for developers to show off their wares. Our community-based features mean that it's not some mysterious editor in an ivory tower writing reviews - it's anybody who can put pen to paper. Our screenshots aren't limited to some airbrushed press releases - they're taken by the gamers. Perhaps most importantly, opinions on gaming aren't just our own - they are the combined feelings and views of anybody who has taken a moment to make themselves heard.

We believe that the best way to get the best content is by relying on the shared experience and skills of the community. We cannot hope to be experts in everything, but all of us are experts in something. By providing a way for people to interact within their skills - and to seek out new ones - we hope to give you the ability to easily achieve your goals by learning from others who have chosen to share their knowledge.

Playing the games is just as big a part of what we do as helping the developers to strut their stuff. Being able to customise your games is at the heart of everything DBolical does, and we aim to make it as easy as possible. From simple extra maps through to entire conversions and even whole new games, we hope to put what you want to play at your fingertips. We hope you enjoy using Mod DB to change the way you and others play games as much as we enjoy running it.

Mod DB first began in spirit back in 1998, with INtense!'s site ModRealm. Originally dedicated to Counter-Strike cheats, ModRealm quickly transformed to take hold of what was hoped to be the 'next big thing' - being able to alter a commercial game to produce different ways of playing.

By 2001, modding had begun to take a hold of gaming, and ModRealm became more popular with the addition of some big-name mods. Unfortunately, it was all drawn to a close on 17th December 2001 by the death of ModRealm's service provider. However, despite ModRealm vanishing, Mod DB was already on the cards.

On 11th January 2002, development of Mod DB v1 began. A new site, built from the ground up to deal specifically with the up-and-coming hobby of modding. What had started as a simple list of mods quickly changed into a fully-fledged site with thousands of features, ready to not only list mods but also provide developers with a way to show off, and players a way to find what they were looking for amongst the hundreds of options. Alongside this, we were the first 'mod site' to offer more than a simple list of what was available by providing news, articles, and a powerful presence for mods. Capturing the mods of the day such as Earth's Special Forces and even Counter-Strike, Mod DB was soon the one-stop shop for finding new things to play, but we didn't stop there.

Shortly after v1 came v1.5, adding the forums and other new features. Mod DB moved to a more powerful server, and the staff was increased to deal with the sudden increase in content needing our overview. By the beginning of 2004, Mod DB was receiving over 10,000 visitors a day, something the v1.5 engine simply wasn't built to deal with. Again, Mod DB went into development and another ground-up rebuild was done. This time v2 brought yet more functionality to the table but kept true to the v1 look-and-feel. Whilst mostly a behind-the-scenes fix, v2 brought features such as downloads, improved galleries, and better mod listing and searching. We also celebrated the first Mod of the Year awards, focussing solely on the mods which had made the year worth playing, and what we were looking forward to playing next year.

Eventually, Mod DB outgrew itself again and it was time for another replacement. v3 was the first entire redesign of the site, changing the look-and-feel, introducing yet more improvements both in front of and behind the scenes, and improving the administration to deal with the now massive influx of visitors, mods, news and more every day. We also improved Mod of the Year with new sponsors such as EA for the winning teams, and began to produce more in-house content including reviews, interviews and more from the latest and greatest mods. A new server, and improvements to the downloads system helped deal with the sheer number of people wanting to know more about mods, and what they could do. We also began to branch out into indie gaming, tapping into the pool of people who had decided to build games from scratch simply because they could.

v3 was soon replaced by v3.5, adding yet more possibilities to the already powerful systems. Mod profiles gained improved navigation, and the administration was split into two teams - one specifically for content and the other specifically to run the admin side. Mod of the Year 2006 was even bigger than before, with names such as Gearbox and the US Navy supporting our rewarding of everything from best retro game to most anticipated mod. We added another sister site, Addon DB, to let people use the powerful features they had become used to on Mod DB to search for everything from maps to models, from audio to skins, for any game or mod out there.

At this point, Mod DB took a huge step in becoming more than a personal hobby for a few people with the formation of DBolical, established specifically to boost the image of independent games development be it addons, mods, or even entire games. This new business side helps us keep the administration; servers, code, legal etc, all separate from what we want to get on with doing - helping everybody to make and find great new content for their gaming world. A staffing reshuffle helped build a strong foundation for what came next.

The single largest update to Mod DB ever: v4. Codenamed GameCore, Mod DB v4 totally changes how we think about what you can do with games, and should change how a lot of other people think as well. Getting the community involved as early as possible, v4 development was based entirely around what people wanted to see. Behind the scenes, the entire database was re-designed from the ground up to no longer force content to be part of a strict category of game, or mod, or addon. With v4 it's now possible to have a mod for an addon, which is for a mod of a game, which was based on another game on a specific engine. Along side this total revamp of how we saw content, we also rearranged how people could connect with each other by introducing Groups. Now mod development teams can band together and show off their skills independently of their mod profiles, and people with similar goals can find a common place to meet. Likewise players can connect with other players of the same game. Powering all this, the relationships system means that finding extra content for what you're playing doesn't mean searching any more - it's right there where you want it.

The design of the site changed to make getting around easier, and new visual features help everything from a single member's profile through to the largest mod look dazzling and pull in the crowds they deserve. v4 is a complete overhaul, with every single aspect of Mod DB and Addon DB being polished by the combined efforts of the Mod DB team, but most importantly also by the combined efforts of anybody who cared to leave us a comment about what they wanted.

But as you've probably guessed, we're not stopping yet. Next on the cards are several new features for developers, and after that we've got a few more things planned which should make getting hold of content even easier. We're constantly looking out for things to improve, so if you've got any ideas just contact us and let us know.

I'd like to repeat Mod DB's very first tag line: "Every game, every mod. One site. Go figure."

We hope we've figured it out, and we're glad you've helped us along the way. Without the community, Mod DB is nothing more than a glorified acronym. With the community, it's the best way to play something different.

If you want to include the Mod DB logo on your site, in-game or else where, the following logos are available for you to use. Download our mediakit for high-quality raw files. 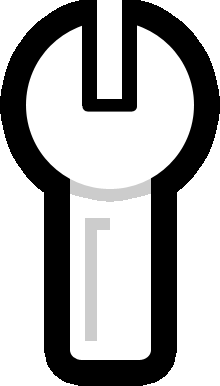 The following collection of link images are for forums and fansites. Use them to link to Mod DB.