System Shock is an action role-playing game developed by Looking Glass Technologies and published by Origin Systems. Released in 1994, the game is set aboard the fictional Citadel Station in a cyberpunk vision of 2072. Assuming the role of a nameless hacker, the player attempts to hinder the plans of a malevolent artificial intelligence.

The modification provides the following:

You can reach the modder, "dertseha", on Nightdive Studio's Discord server, as well as on the systemshock.org forums. 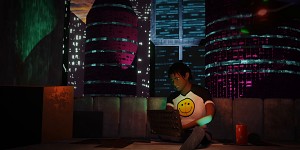 This mod was the ideal candidate to drive forward my effort to extend the editor for the game to support the cutscenes.
The video codec used for the cutscenes is an elaborate one, and while the decoding algorithm is known for decades now, developing an encoder was tricky.

Starting in March 2019, I made first attempts at creating a compatible encoder. First encoding static, single-color images, then continuing to re-encode the original scenes. With a very limited byte-budget of the codec, and limited time-budget for this hobby project, progress was slow. After succeeding to properly re-encode all the scenes of the original in August, I had the idea for a great showcase: Have a familiar video and replace the protagonist.
Thus the idea was born to bring some diversity to this classic game.

Asking around, I learned that there's a difference between "pixel-art" and "low-poly" art. With the original videos falling into the category of "low-poly" art, I searched on respective Reddit groups and Discrod servers. Earlier in 2020, I made contact with a freelance artist, VintageWarm, who was willing to take on the project.

After some incremental approaches, we settled on a mixture of re-creating some scenes and "splicing" others, where I took the new part and stitched it into the original video, frame by frame.

It was definitely a fun experience and exercise to work on. I'm very happy to have created the first mod showcasing new videos, as well as bringing a new character option to the players.

Lazarus Decλy 0.1.3 has been released!

The second fanmission for the original System Shock in 24 years comes out on 12/24/2018 to christmas and will feature brand new guns with all new sounds...

Night Dive Studios has updated the Source Port of System Shock with support for mods.

This mod replaces the textures of 3D objects of the computer game System Shock (1994) with some having higher resolution.

This mod allows players to feature a female protagonist for the computer game System Shock (1994).

SYSTEM SHOCK: Ruby Station does not only introduce a custom-weapon mod for the original campaign of System Shock but also a Single Level Fanmission where...

This archive includes the transcript of System Shock: ReWired as well as tools to create a translation for the mod by yourself.

I love this game, but there are barely andy mods :/

No mods? Like, AT ALL?!? I was hoping for an overhaul.

well. now there is a mod. freshly released. but I would wait until I release version 1.3 in a few days.

Hello there! Despite having competition of a remake and a SS3 in the works, there's a project working on cracking all the data files - creating editor tools as a by-product. The result of this is a very first level mod. It's more a proof of concept example rather than an evening-filling sequence of levels. Still - there's hope, if there is demand :)

There was a time when no other game was as good as ss1. So advance for his time. Mastering the controls where part of the game. I hope for a remake.

Awesome game! I played this everyday last year. How is this a role playing game? It looks more like a shooter.

You think someone who used to modern graphics and got into gaming not so long ago wouldn't be able to fully appreciate that game with its atmosphere and horror?
I think this is the kind that really should have a remake, this and the 2nd one, so people from later generation of gamers like myself would enjoy these game more. Somebody, make it! Make System Shock HD!