I'm Joey, freeminded, gamer, hobby leveldesigner, streamer, youtuber, and what comes with lots of passion! Be fair and we come along nicely!

Making Of: REVIVAL MapPack for SHOGO

..in August 2017 I made 3 multiplayer maps for SHOGO Mobile Armor Division by learning the hard way how difficult and not user friendly the editor for SHOGO, NOLF and BLOOD 2 is. That I even kept working with it to finish the maps is a mystery to me. I got reminded about that hard time I had when booting up the editor today for the first time in a year to make some adjustments to the item placement of the maps. But now they are out in updated and more balanced versions called Revival MapPack 2018. Just released today. With this article, I will take a look back in time and write down my design decisions when making the maps.

Name: MCA_SKYSCRAPERS2018
Mode: In Mech
Size: Large
Players: 2-8
The idea behind skyscrapers is that the original DM maps didn’t feature big levels, with tons of buildings in various sizes, in which players could jump from roof to roof in their Mechs. So the goal was to create such a map. When I started the map it looked much bigger, with wide open spaces resulting in reaching the limits of what the editor can do: A horrible unbalanced map with overdraw beyond the 10.000frames mark bringing even powerful PCs to the knees. SHOGO's iteration of the Lithtech engine sadly got very bad overdraw prevention. Skyscrapers is the third attempt of such a map and by dividing the areas trough tunnels (choke points) and the clever use of skyportals I created a world that feels seamless without it being truly seemless. All players start in the outer areas of the map and have to reach the central area where the most destructive weapons are waiting to be picked up. With a RED RIOT (Shogos most powerful gun) floating midair to be catched and used. 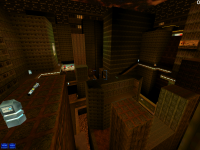 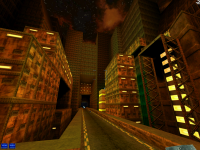 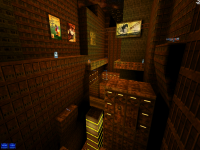 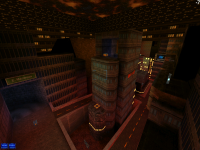 Name: OF_MUSEUM2018
Mode: On Foot
Size: Medium
Players: 4-6
While I was creating levels to include in my tutorial levels, I ended up having the idea to produce a map solely based on the museum texture set of Shogo. It began with two corridors and two event rooms. While trying to prevent overdraw to receive a smooth running level, I created hallways to reduce overdraw which in the end resulted into the startup corridors the players start in. There is one gigantic roof area connected trough ventilation shafts to the lower parts of the level. There were so many health-pickups up there that friends and me couldn't kill each other due to constantly being able to pick up health items. So I do hope that I could fix that by reducing the pickups. And if not then I at least tried. All players start in the central corridors, have to reach the roof for the big guns and ultra powerups. They can then quickly access the event halls from above by using the ventialtion shaft system in the center of the roof. 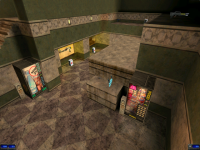 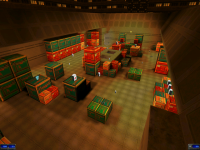 Name: OF_KATOMINE2018
Mode: On Foot
Size: Mini
Players: 2-4
When I was working on Skyscrapers and failing to create my vision of a large map with many rooftops to jumpto, I decided to take a breather and tried myself on a smaller map to try out new things. Katomine, which was previously named Tomb and should resemble levels one would find in Tomb Raider was the result. It ended up being a small unrefined map with lots of creative impulses, but might not be able to hold more than 2 players attention. The perfect 1on1 Deathmatch Map! It even got a secret that is rewarded to players that try swimming around in the hazardous Kato fluid. And the cool thing about the Squeaky Toy is, whoever get's it will have it forever and can pesker the opponent with the magic claw! 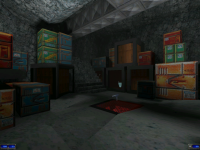 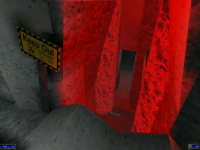 Hi there. Could I ask you questions about how you made your Lithtech maps?