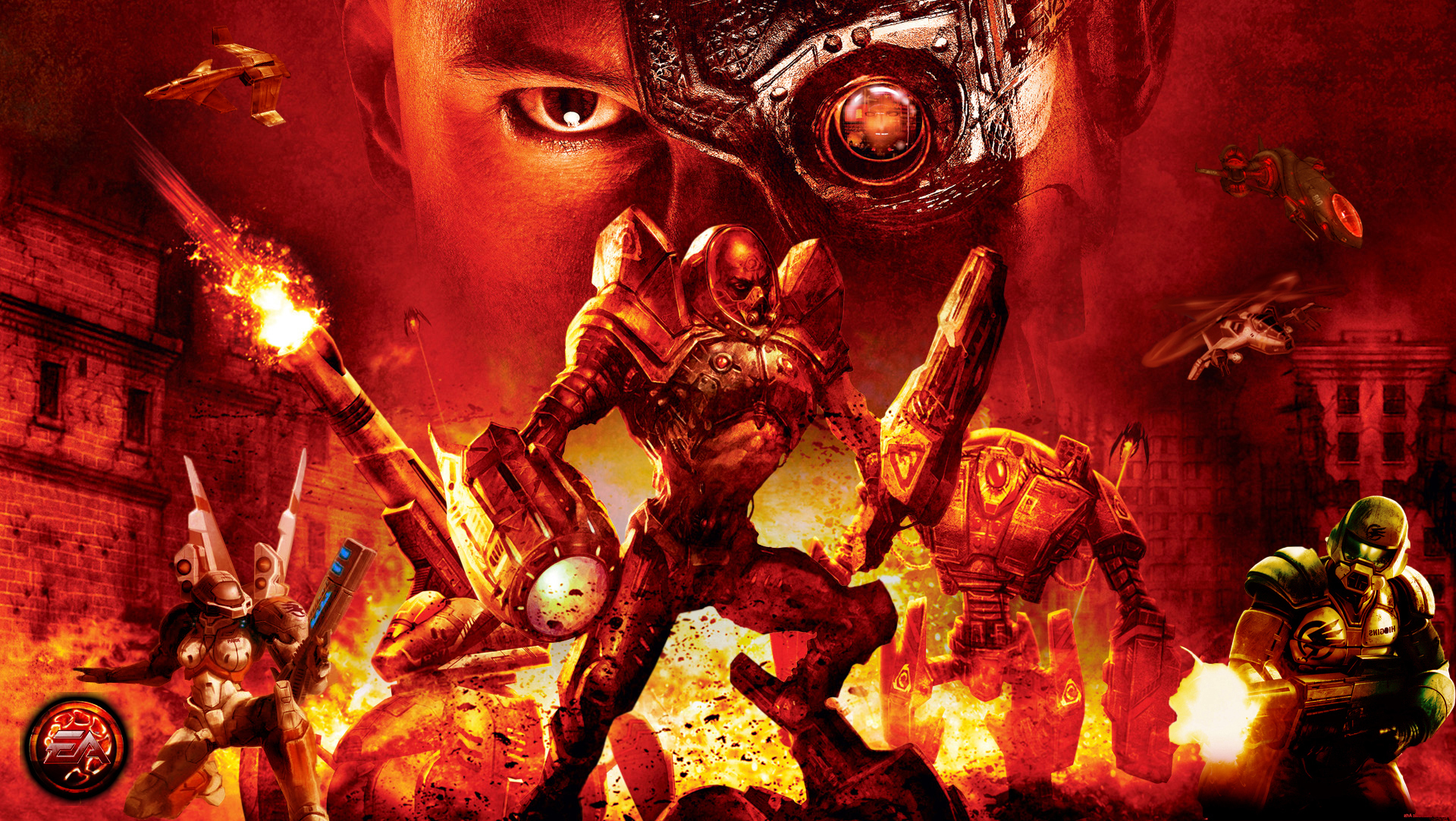 It started with the aim of just balance changes and bugs fixes, making stuff that people rarely used more noticeable, useful, and adding more options for team play like RA3 and BFME had.
Since a lot of people requested me to add a few stuff that in their opinions were supposed to be in the original KW I ended up adding some new content (but I had red line and didn't add ton of useless stuff to the mixer as the mod didn't aim to add too many new units to the point the factions would be unbalanced and the units would be useless).

So this "Unofficial Patch" is now big bang patch that rather than just focusing on balance and bug fixes It also adds new stuff in order to make the decade old KW feel more refreshing.
I had many ideas how to add new stuff to the game's gameplay, some worked and some didn't (and were removed), you can see it as small expansion pack at this point honestly.

This is project is up on moddb since 2014 and is still WIP.

One of the main ideas of this project was to work with the community in order to create the mod for the community, however as I mentioned before the mod have red lines,

this project can be changed by your comments however I can't promise that I will change anything you want. Please note that this mod aims to make things more balanced while also trying to add uniqueness.

Uniqueness + balance in RTS is really hard to achieve but if they are combined in the right way they can keep the most import ingredient at bay: the "Fun".

Here is a short list of what has been changed so far:

*More bugs have been fixed (many many many bugs fixes),

*The mod have few new units,

*Economic system moved back to how it was in ver 1.00,

You can also see info about the project here:

Don't forgot that a lot of stuff will be depend on the players commits, if you have ideas please say them here!

If it will be in my ability and I will see that many players are happy with it, I may add it :) 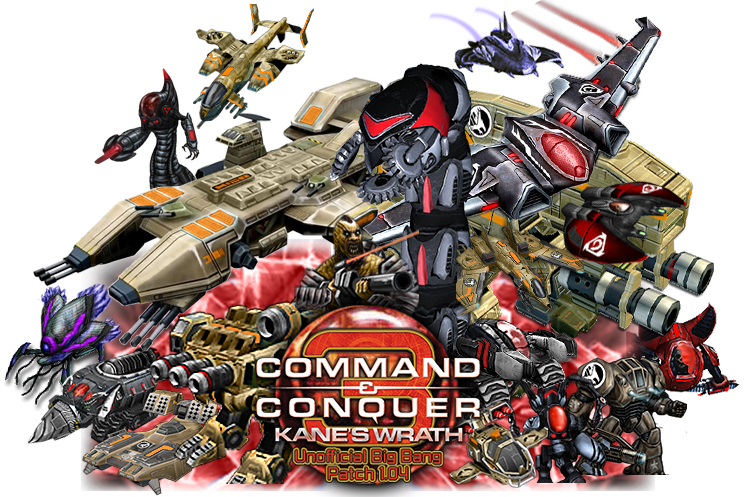 I originally planned to release this as an hotfix ver in less than a month after the release of 0.3 but things happened (things some of you might be happy about).

This version is mostly about improving the exsiting stuff the mod already has and fixing some bugs and balances issues some of you addressed to me for a long time now, but as result it has less focus on adding new units to the mixer though I did was able to somehow squeezed in few new stuff.

The full changelog can be seen above if you're interested, but if you want some light version here's some quick summed up list to what you can expect in the new version:

Some bugs and crashes were fixed;
My first few weeks of working on 0.4 were mostly about pinpointing what caused the AI to CTD the game which took a lot of time to test, and as result the AI functionality with two support powers and garrisons squads in epic units were tuned down a bit.

New functionality to some units:

Units such as the Assault Rider and the Cyborg Commando now have new stuff,
For example Assault Rider will now switches to electricity bolts under the Ion Storm's effect

while the Cyborg Commando now has a chance to survive death by losing its body parts and become disabled crawler like it originally could in TT, but instead of being some unless hijacker it now can suicide on enemy's units while dealing 6000 grenades damage! 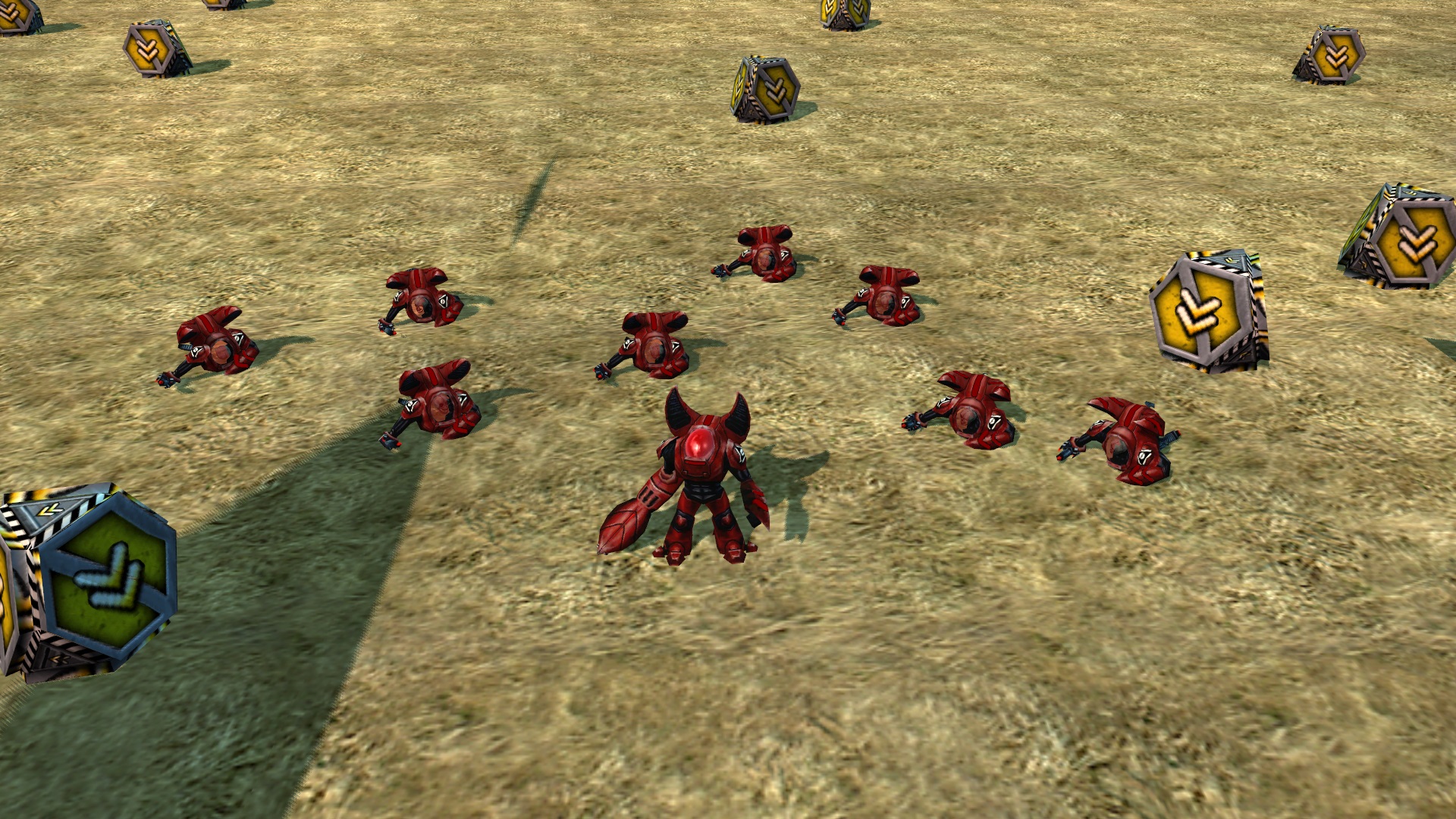 The main menu was changed to fit the Big Bang's spirit (you can see the stuff I've tried before the final result here), 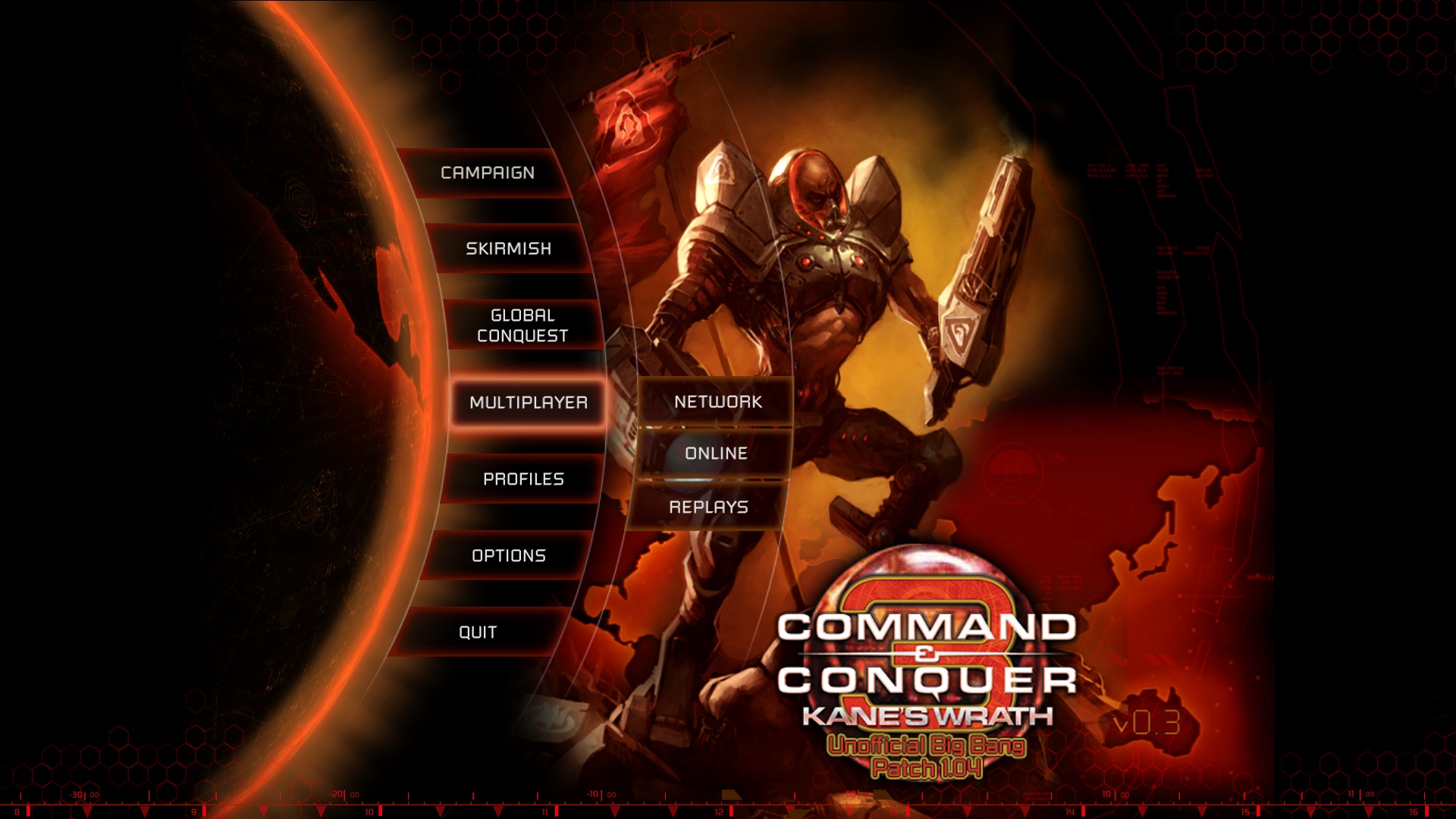 Also:
Some visuals and effects were improved,

Some units now have their own debris models,

And some old models and their animations were edited a bit by your truly to make them look a bit better than what they were in their original state such as the MARV, Steel troopers, Zone troopers, and Cyborg commando 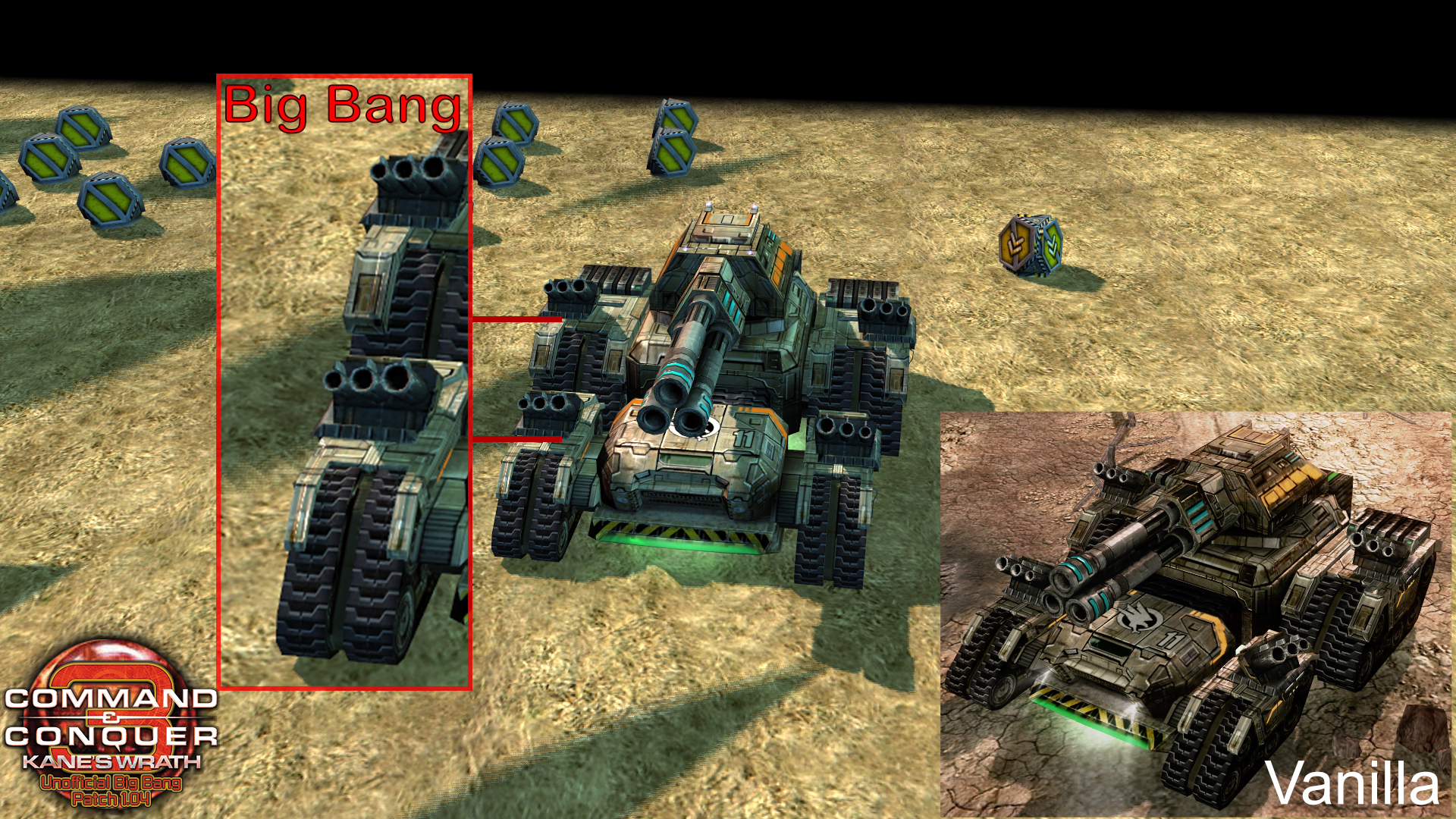 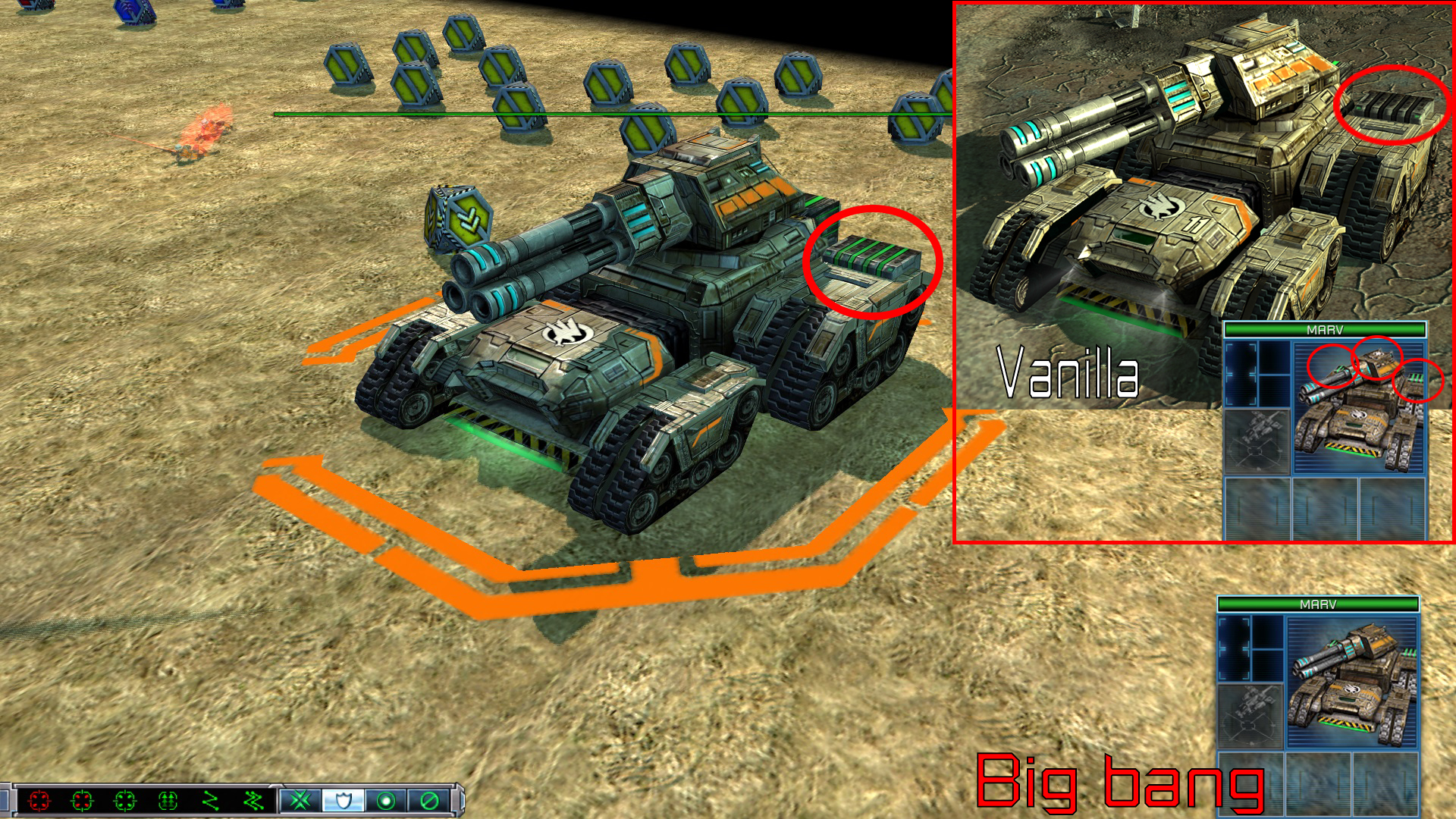 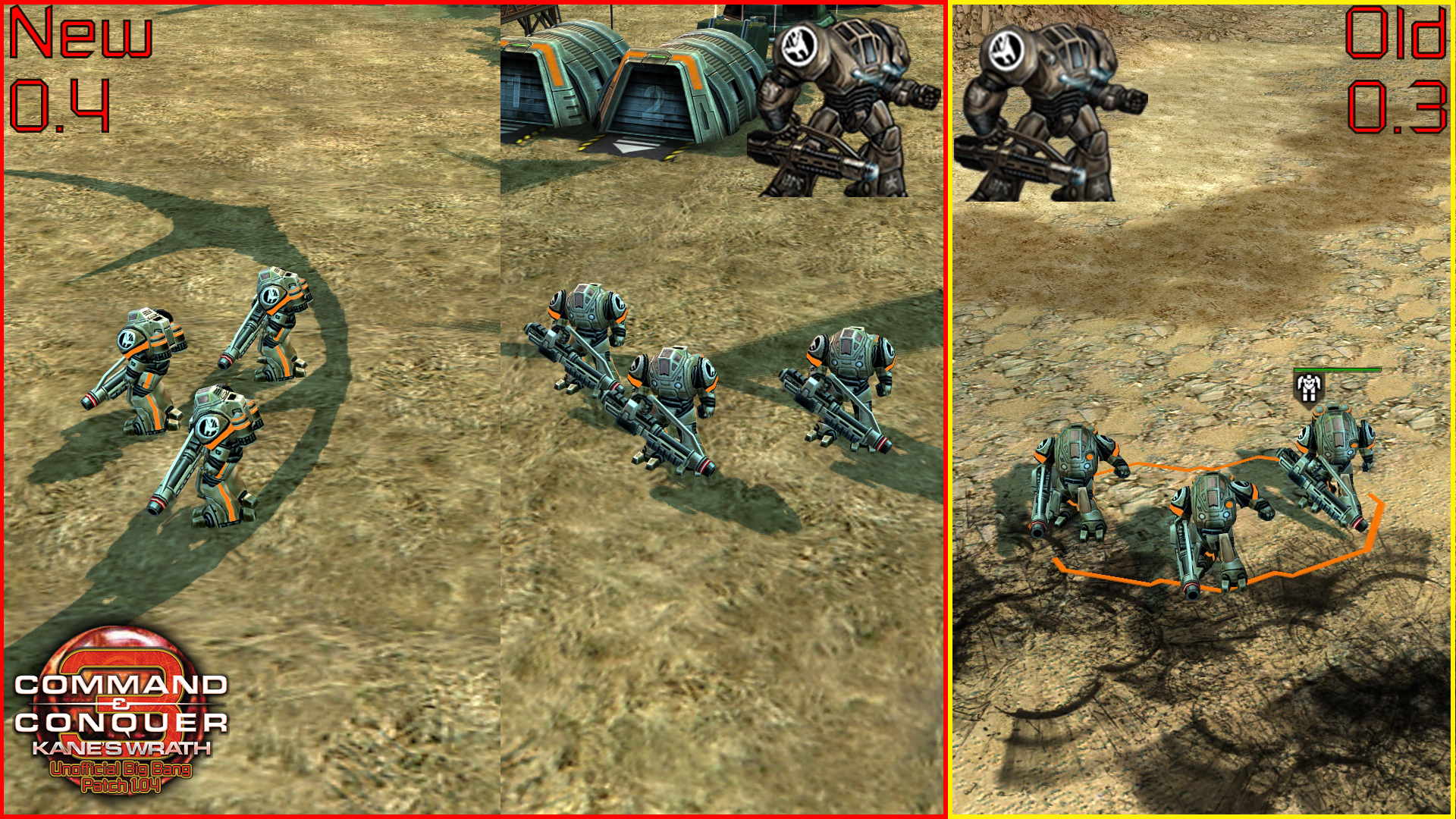 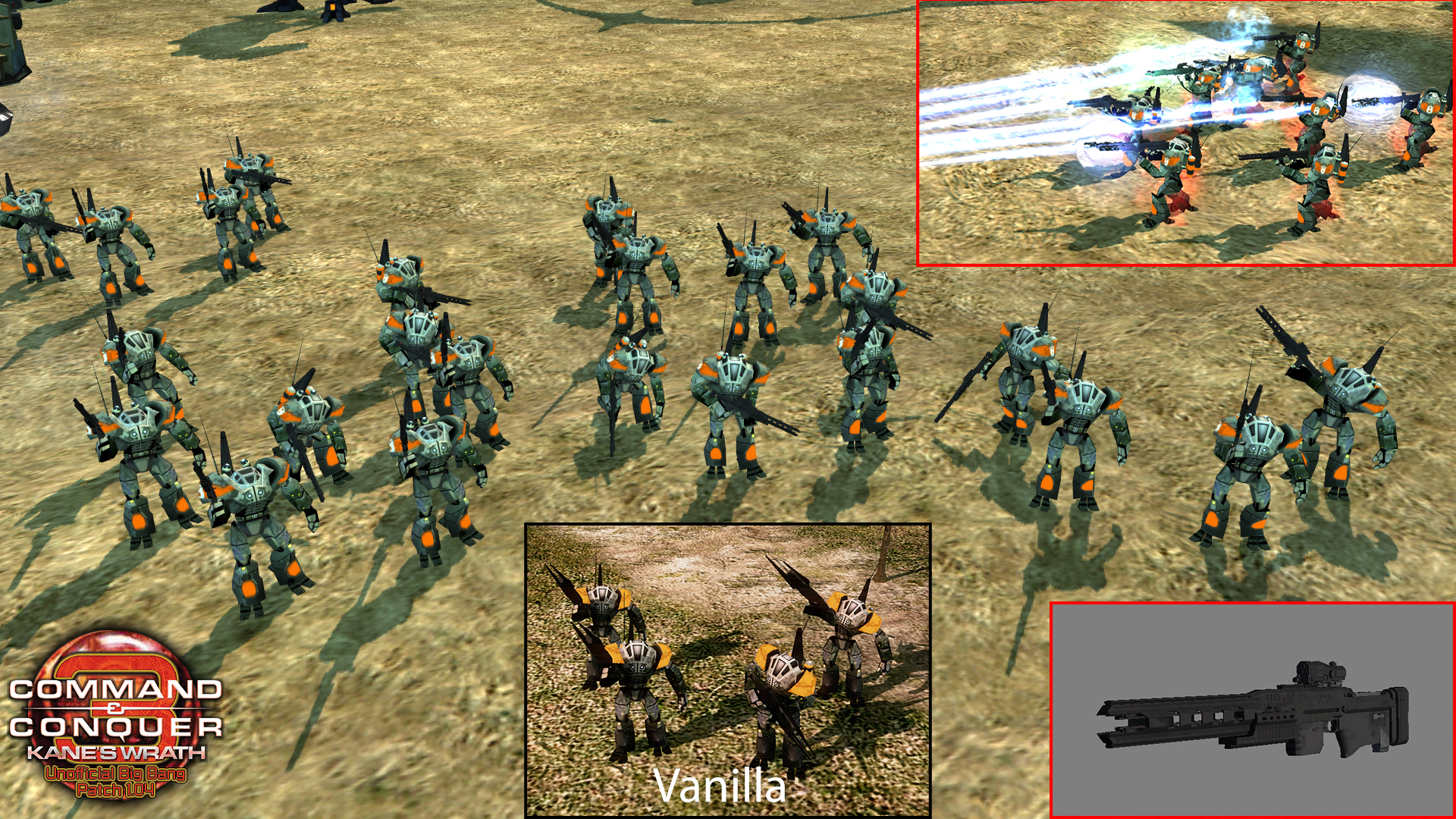 Reaper 17 now got their own commando, the Exterminator ;) 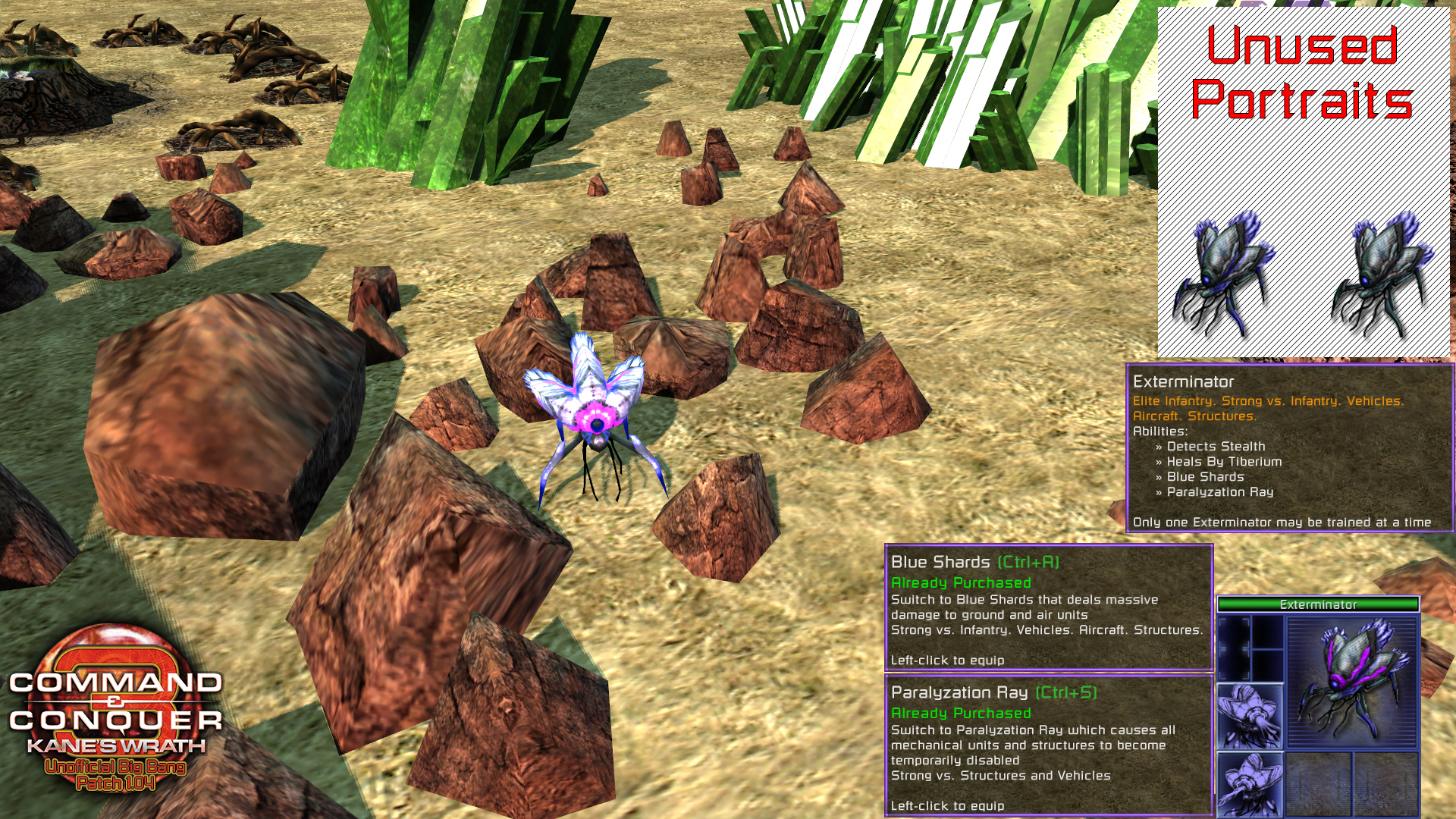 And while it may be kinda sophisticated to say that, some of you can counts the Cybernetic Husk the Cybrog Commando spawns as a unit by its own ;p 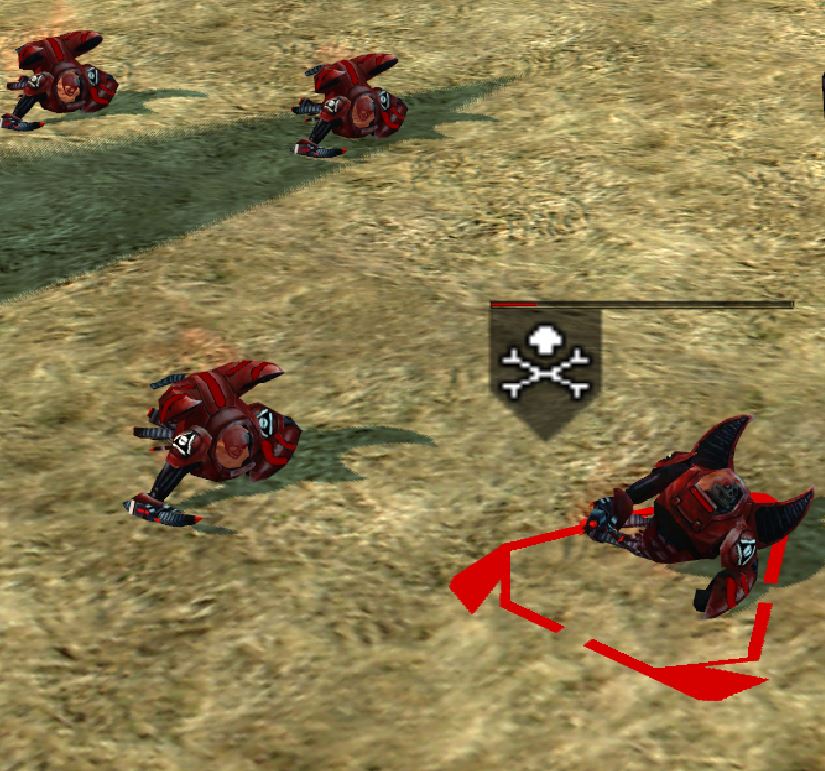 Some more edits to the camp:

In the last mission you now starts with the Cyborg Commando in your disposal, and some bugs that were in the original game were fixed. 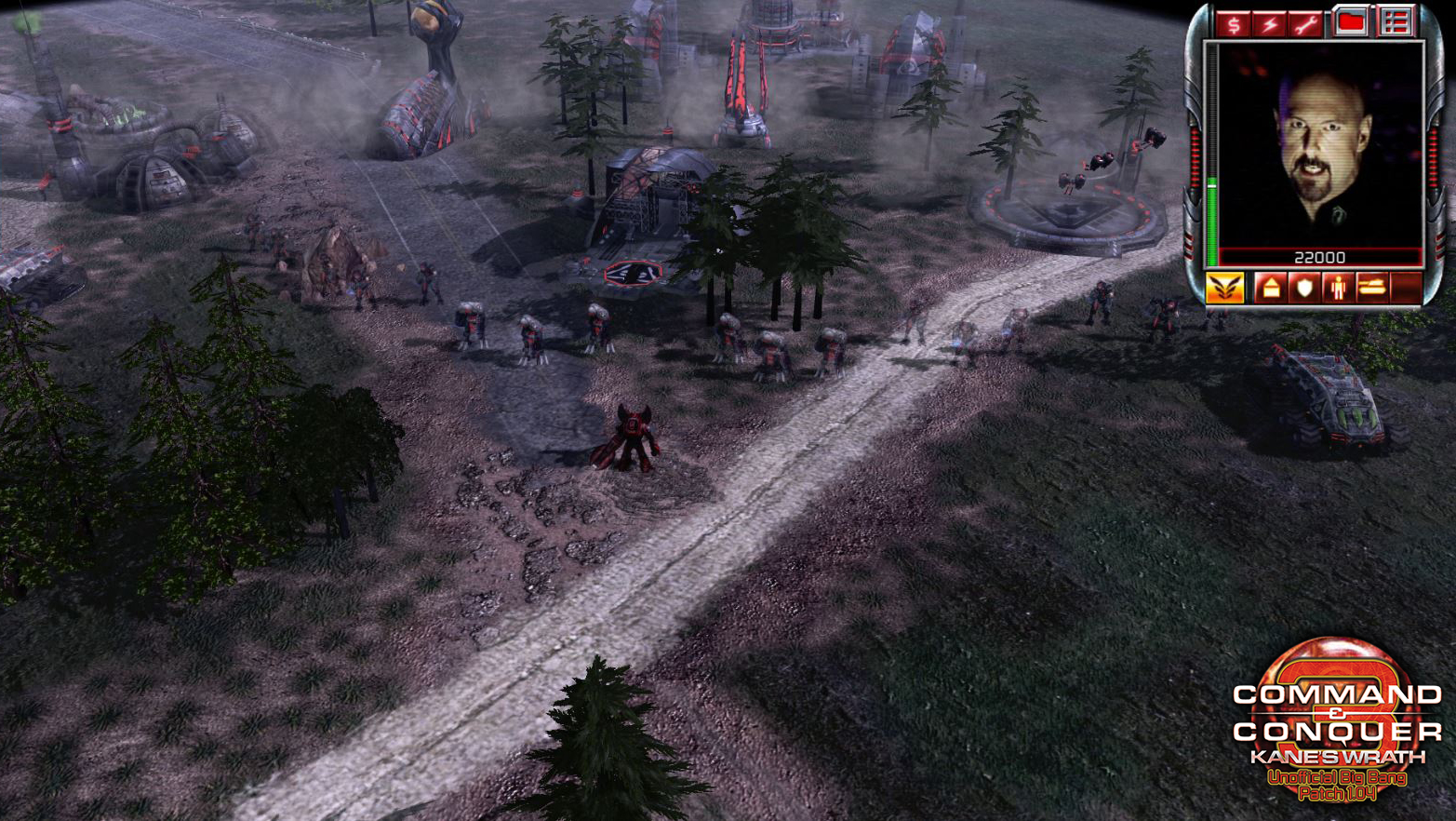 And last but not least it's really recommended for you to use the 4GB patcher Medstar has made or the mod will most likely ganna crash in your face while you're ingame, and also be sure to try his launcher fixer if you're one of the poor souls who got the game via Origin.

If you have any issues running the mod first see this guide and if it didn't helped you can open a thread in the mod's forums or report in our official discord server,
And if you feel like it, you can peek on the mod official site just cause it exist =D.

Also if you having fun and takes the mod in high regards, a small review will always be appreciated.

That's all commanders, now have fun :).

Unofficial Big Bang Patch 1.04 (0.3) is out! After the long wait I've decided to release the mod in its current unfinished yet playable state even though...

Thanks a lot for your time, After looking at the data I've gathered from the poll and asking people around I've reached to a conclusion.

Tell me what you think about some future balance changes I have in mind.

Unofficial Big Bang Patch 1.04 v0.4 is out! Be sure to read the description if you have any issue.

A tool for running Kane's Wrath's mods. Made by Bibber.

Probably not what you was looking for... But it took me some hours of work so I hope you will enjoy it xD

Unofficial Big Bang Patch 1.04 v0.3 is finally out! (Although in an unfinished yet playable state~)

This mod aims to let the game better use/stress your better PC in pursuit of better performance. It is recommended to use with the 4GB memory patch for...

Not to be confused with the "Kane's Wrath Fixed Map Pack", these maps are the same maps Just before I compiled them with the BuildMap bat, meaning that...

I have a question. Will this mod mod change anything in the camping other than bug fixes?

And some stuff were changed to make more sense with the missions
Moddb.com

I'm not going to change the campaign entirely or add new missions though :/

Hello
Great job, the mod is superb. Thanks for the effort.
Can I be cheeky and ask you to add an option for disabling the superweapons.
This is probably my favourite game from the whole C&C series but unlike the other ones this one doesn't have this option.
In all fairness as much as I love the game I always ending up uninstalling it after 10 or so games exactly because of that.
Many thanks
Have a great time

The main issue with adding new buttons in KW is that we can't, mostly cause there's no tool that let us add new stuff to the UI so we're forced to use what we have there, and the only option I can replace for Singleplayer is the crate button which I rather keep,

For online we have few more buttons that we could exploits for No SW button, and I've actually asked some people few years ago to help me find out where I can edit them since I have no clue about these, and no one told me anything xD

I bet I could've find something if I would've looked deeper, but had other stuff to focus at back at the day which took priority.

Maybe the day to look into this has finally came 🤔

Please add forgotten as a new faction.They dont need any subfaction,just a
single forgotten faction will be okay.

If it ever happened I don't think it will be anytime soon ;/

Up Against Command & Conquer 3: Kane's Wrath