Bringing a new and visually stunning 3D engine to the RTS genre is C&C: Generals. Play as the USA, China or the GLA with a large selection of tanks troops and air units, as well as unique general abilities to help you turn the tide of war. Command & Conquer™ Generals puts your trigger finger on the pulse of modern warfare. Prepare your forces, General… it's time to engage in the next generation of real-time strategy. * Wage real-time war in more ways than ever with a modern and near-future arsenal. * Battle it out in unprecedented detail on full 3D environments. * All-new units and tactics with maximum destructive capability, including Aurora Strike Bombers, Dragon Tanks, and much more. * Team up with eight friends or go head-to-head in massive online multiplayer battles.

Fixed launchers for the games in Origin's Command and Conquer: The Ultimate Collection. Re-enables command-line parameters for the games, adds in some missing registry keys, and adds in some community patches automatically. These launchers ARE NOT the same as Bibber's; made with an entirely different programming language, and the functions used in the source are not related to those used in Bibber's. I made my own launchers for the community to use based on how I think they originally should have worked since Bibber doesn't want his up anywhere public anymore (his decision, of which I respect). License file included with download. Permissions about redistribution detailed in there. Patch notes included as well. Have fun :D

This installer includes my custom fixed launchers for Command & Conquer: The Ultimate Collection. These fixed launchers re-enable command-line parameters to pass through to your games; and this installer will also add in some missing registry keys that re-enable the ability to use custom maps. These launchers also make it to where you can launch directly from the games’ respectful game exe’s (e.g. CNC3.exe)--completely bypassing the launchers entirely.

These launchers aim to emulate the now-publicly-unavailable fixed launchers from Bibber. I have re-created the launchers from scratch using AutoIT; they ARE NOT the same launchers that Bibber made. The source code used to compile these launchers and the installer ARE NOT the same as Bibber’s; therefore, NOTHING IN THIS INSTALLER IS COPYRIGHTED BY BIBBER. I made sure of that as to avoid any possible copyright stuff with him. I don't want to mess with any of that crap; I respect him for his work, and I respect his decision in taking down his launchers. I just want to make my stuff work how I want it to work, I want my games to work how I want them to work (in that I want them to work as they should have from the get-go), and I want to share my stuff with the community since it all works great for me.

TLDR: The launchers themselves are of my own work (as you can see in the details of the exes’ properties); everything else is owned by their respectful owners (e.g. the No-CD patched exe’s, any community patches included in this installer, any artwork used in the installer wizard, the games themselves, etc). Bibber is the OG that inspired me to make my own launchers for the community to try out. These launchers are similar to Bibber's--they are NOT direct copies of his, since that would infringe on his copyright (of which I respect).

Finally, use these launchers at your own risk; and I hope they help you out as much as they've helped me out.

PLEASE disable "Origin In Game" and the "Cloud Saves" feature for each game prior to using the installer. Doing so will save you a lot of headaches and incompatibilities. The "Origin In Game" feature most notably will overwrite the fixed launchers for your games when you try to launch them--it's like a pre-launch check of the game files. You can disable them by right clicking your game in your Game Library in the Origin desktop app, selecting Game Properties, then unchecking the boxes for each feature.

The installer features a game selection page where one selects the game they want to add the new launchers to. The installer then replaces the following:

If you want any other features included in this installer, feel free to add an issue and label it with the "feature request" label.

The 1.06c patch made by Nyerguds is also installed as a necessary feature. Permission has been granted to me to use this patch by Nyerguds within my installer. The patch includes bugfixes and other features to enhance the overall gameplay of C&C95 along with making the game properly compatible on most modern machines. More info available here concerning the 1.06c patch:

Thank you again, Nyerguds, for allowing me to include your patch in this launcher.

Since this is a recurring issue with both games, the installer automatically removes "dbghelp.dll" from both game directories as to avoid the on-launch-crash that occurs (Technical Difficulties, Serious Error, etc).

Another recurring issue is the game crashing on launch due to the "options.ini" file. The file itself could be either missing from one's Documents folder, or it could have the incorrect resolution set for the game. I've made a tool called "ResEdit" (aka, "Resolution Editor") that automatically either edits these files with the correct resolution information, or it automatically makes one with the proper resolution set in case the file is missing entirely.

Another recurring issue is the fact that one can't use custom maps right on download with these five games. The installer adds in the needed registry key for these games to recognize custom maps.

Command-Line Parameters Exclusive to The Launchers

In the Origin desktop app, right-click your games’ portraits and select the “Repair” option. 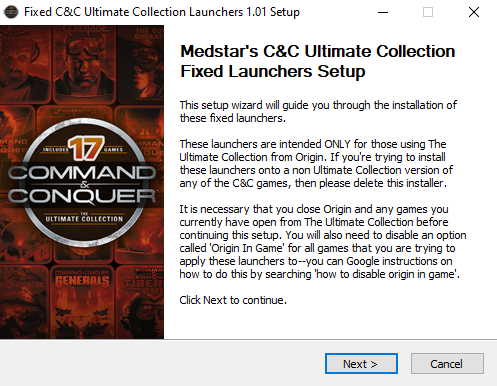 Nice, been lookin for a new patch.

Morning. Why is my virus scanner going off the hook when I try to use this? This file is flagged by 3 different scanners according to VirusTotal

That may be due to some of the tools I have placed inside of my installer. A lot of the files in there were compiled with a program called AutoIT--a lot of virus scanners flag those files as unsafe since a lot of scummy people use the compiler as a way to make malware. A lot of virus scanners use heuristic algorithms when scanning files--in Layman's terms, it scans for pieces of code that are most commonly included in malicious software and guesses that the entire file is a virus. It could be a large chunk of code, it could be a tiny segment; hell, it could even be the names of the files within the installer that set a virus scanner off (that is actually a noted issue when using the installer for C&C:Renegade; my virus scanner, Webroot SecureAnywhere, flags that file as unsafe due to it being named "RenegadeLauncher.exe" XD)

I assure you that the launchers are completely safe and malware/virus-free. You can even use 7zip to view the files inside of it if you don't take my word for it.

Just so everyone knows, you can keep track of the progress I have for this project on my GitHub page! Github.com

If you would like to bring an issue to my attention, you can do so here: Github.com

Or, if you would like a certain patch or feature to be implemented, you can also make a new issue on my GitHub with the "Feature Request" label.

Hope everyone enjoys v1.01 of my fixed launchers! More patches and content to come soon!

Hey Medstar, just wanted to say that you're doing a lot of good for us C&C Community. Hey, I know you addressed why some virus scans are going crazy when it comes to this, but I scanned it on VirusTotal to be safe, and though I have Microsoft Windows Defender as my main setup, VirusTotal has said that 12 out of the 60 engines it uses has detected this as some sort of virus and malware and all that.

I'll put the link in this so you can see yourself. But still though, glad you're helping out the C&C community.

Hey there, viperdx! Thanks for the VirusTotal link :)

At first glance on what engines are screaming bloody murder, I'm kinda sticking to my initial assumption in that it's an AutoIT heuristic on their end--i.e. the engines will automatically assume that anything made by AutoIT is a virus. Heck, even two of the noted engines even say "W32/AutoIt.IJ.gen!Eldorado"--that reaffirms my suspicion even more.

I'll look into it either way. Plus, the noted engines don't really stand out to me--only one of the bunch (McAfee) I actually know of; and that one in particular I don't even trust to begin with from my own experiences.

Either way, thanks again! And it is my pleasure to be of service to this awesome community! :D