Note: Everything in this mod can be disabled one by one if you would like to. Also note that there may be bugs present, but that should be considered as the cost for this wide range of new partly experimental features, made by only one person.

Many additional files for lua modders and a self written sage engine lua modding guide are included in the download package.

Thanks for voting and helping Meta Mod on it's quest to become the 2021 Mod of the Year. You are now in with a chance to score some free games from our #modlove collection. Help this mod secure more votes by embedding the widget (or link) we have included below on your favorite sites.

Multiplayer support is a possibility in the future. First prototypes are working and I can say It's nice to play with other players in diplomacy mode, giving the game a new level of depth.

As there is no way of transfering user specific config data between clients that I know of currently, there will eventually be a admin setup mode, where the game will stay in a paused state until the admin/host of the game has setup gamemodes and other customizations in an ingame text menu. Maybe I'll add some admin tools too, for kicking players and reseting the map/game state (so you never need to host a new game). Another way of setting options will be through admin name additions. Im Also considering ingame live polls for choosing next gamemodes and more (a similiar mechanic is already implemented for accepting/denying the team commander).

Next release Meta Mod will sligthly differ from the list from 02.18.2016

1. Fully functional diplomacy system: For very dynamic and long lasting game experiences with intelligent AI. AI always tries to preserve Equilibrium, so if you are about to get too strong, AI faction will form alliances against you. There will be a diplomacy menu in the build tab menu where you can break/create alliances. Too improve the acceptance propability for an alliance you can offer money. You can also try to bribe the enemy if he is about to attack you, so that he will leave back to his base for some time. (Status: prototype ready, 40%)

2. Evolutionary self learning AI which adapts to it's opponents and saves it's experience to an external file. There will propably be two versions: One whole player based (for AI) and one for a single selectable unit (maybe as an special power ability) (Status: 10%, long term project)

3. Autostart Config: A Config file which will be created in your KW user data folder with many options including game performance options, superweapon toggle. The config loads after every map load so no game restart necessary. You can also use it to put your own lua scripts inside. (Status: 100%)

4. LUA IO Mod: Start your own LUA scripts live in game from an external file, so it's like a console in other games. I've added many handy commands you can use including sandbox commands such as spawn unit (example: spawn("NodAvatar") ), teleport unit, transfer unit, set unit status, delete unit an so on. There is also a command to write data to a file. Especially usefull for modders and debugging purpose. There is also a GPS/coordinate system available i've created. (Status: 100%)

5. AI Co-Control Toggle Button: The AI is active for human player and you can both control your faction at the same time (really cool feature and good for afk times). (Status: 100%)

6. AI Boost Toggle Button: If the AI seems to loose at some point boost it! It gets an amount of money per sec. Maybe i make an option in the autostart.lua config file for autoboost. (Status: 100%)

7. Meta Control Option Bar put into it's own build menu tab, so the player power bar is free again. (Status: 100%) 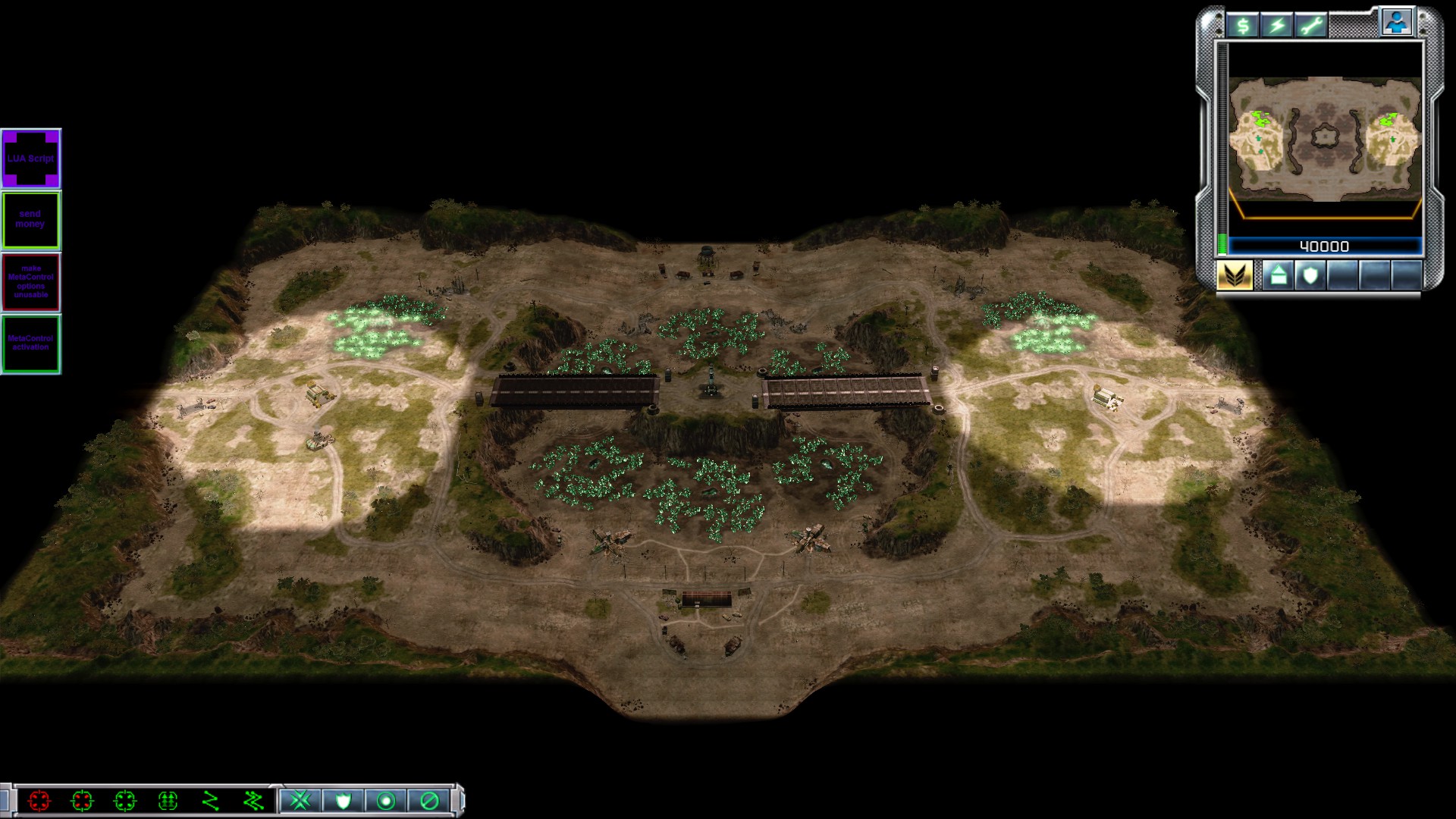 9. *NEW* Native art of defense gamemode you can use on any map. You can customize wave ammount, wave delay, first wave delay, difficulty increase rate and maybe more. The AI adapts to player style and strength. (Status: 60% prototype ready)

- Capture the flag gamemode where you need to hold a marker on the map for a specific ammount of time. If the enemy team takes it away the timer restarts.

- Credit System: You can lend money from the bank. You will have to pay it back. If not the "bank army" appears to attack you until you pay.

I have to mention that each and every option in this mod can be turned on and off with use of the autostart.lua config file. So you have the freedom to create your own highly customized KW. If you play multiplayer only options which all players have activated will be enabled.

If you have good ideas for my planed features or any idea for a new crazy feature please share with me. I've discovered some of the deepest secrets of SAGE Engine Lua scripting, and virtually anything now seems to be possible. I will share all my knowledge about SAGE Lua after the next Mod release.

Please subscribe my blog for more updates and stuff.

Greetings from Mjjstral from Germany

-> use the "MetaModGuide+SageLuaModdingGuide" link below for a more complete list on all the new features. Video also below. Important new features (small...

Meta Mod 1.01 Full Source Code - This Source Code is at least compatible to compile with Wrathed 1.07 Gamma. Use it however you like without asking me.

This is the first release of the Meta Mod made public.

I can not use the sandbox config how to activate it

Hey i got it to work in the campaign of kanes wrath but i do have one question.
on some missions the meta mod doesnt start is that how its supposed to be or is there a fix to that?

how do i earn rank and xp to buy stuff on the meta credit menu
also in sandbox mode i cant spawn units it gets errors and crashes kw any fix?

I've just spent waaay too many hours trying to get this mod to work. I created a shortcut to tiberium wars cnc3.exe, using -ui cnc3 with bibber's ultimate edition launcher and it works fine, but for Kane's wrath, the exact same thing simply does not work.

The shortcut to cnc3ep1.exe with -ui cnc3ep1 just brings up the regular launch window without the "game browser" button, so I can't select a mod.

Do you guys just not have this problem because you don't have the ultimate edition, or is there an extra step somewhere to make Kane's Wrath work?

For Kane's Wrath it's a bit different. You can use the Wrathed mod launcher from bibber. I have written down all install methods in the guide: De.scribd.com

How do i unlock meta credit shop ? i cannot buy anything or level up

You need to gain xp points and by that gain certain rank level to unlock the shop items. There is even a seperate savegame file meta mod creates where it stores your credits, xp and rank. But there is also a sandbox mode you can activate in the configs to circumvent the requirements.

well i see the savegame but i want to earn xp and credits sry I just dont understand :/

See this part Imgur.com of the guide.

can you pls add an installer? with option on what settings or lua files we want? i have dyslexia and all this information make it difficult for me to to install the mod.

You only need to load the mod with wrathed (after placing it to the correct folder) -> see here for example Youtube.com. You can then change every option in an ingame text menu very conveniently (meta command menu). No more work then this required usually. You dont have to care about the external lua files. The mod creates them by itself.