Star Trek: Enterprise - M.A.C.O. is the re-launch of the cancelled Star Trek: Enterprise – Temporal Cold War (E:TCW) single-player Half-Life 2 modification, now based on CryTek’s CryEngine 3 technology. By learning from the mistakes we made during the development of E:TCW, and utilizing the majority of the modelling and texturing assets created for its predecessor, we are confident that production will move forward at a far greater speed than during our last attempt.

Storywise, STE:M aspires to showcase the character-based storytelling format intended for E:TCW in small, one-hour episodes. Gameplay-wise however, it embraces the formula used in the Elite Force series of video games, offering both linear combat levels and free roam sections to let players explore the NX-01 Enterprise within reasonable bounds.

The modification's website and forum is currently in the works - expect some promotional material after we set everything up.

We hope you will join us in this endeavor over the coming months - thanks, and see you at warp speed!

First of all, we definitely owe you an apology: we were really, really quiet in the past couple months, due to our real-life commitments. Our dedicated leader, TripTucker finally found a job where he can put his great modelling skills into good use, "overtime" is the first word nowadays in Croesus' dictionary, while myself also have limited time to look after the story and the script of STE:M.
That said, we really wanted to show you that we are still alive and preparing to leave dry dock - so let us show you a glimpse on what we have been doing in the past months.

Whenever his time allowed, TripTucker (true to his nickname :D) was working diligently on the layout and props of Engineering. Although the room is still far from completion, we can already show off a completed corner of the Warp Core... 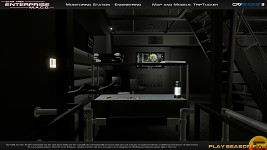 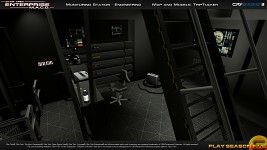 By the way, you can find an extra screenshot at the original forum topic of this update. ;)

Croesus also practiced his character modelling skills in the past months, which is readily apparent if you take a look at his latest work below. Since this media release is focusing on Engineering, I think his choice of character is not surprising... 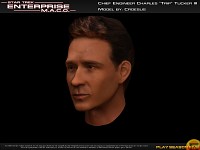 We are also very happy to inform you that we have a new crewmember aboard: LewisNiven is reinforcing our mapping department. Although Lewis is a newcomer to CryEngine 3, he is by no means inexperienced when it comes to Star Trek mods: he has his own Source-based project aiming to re-create the Enterprise-D in a Half-Life 2 mod. Make sure to check out his site when you have some free time!

Lewis will help out Trip in building the decks, and will also fine-tune the lighting effects of the rooms created - with any luck, we might be able to share some teaser shots with you in the coming weeks, thus providing updates in a much more regular fashion... ;)

Thanks for reading through our news update!

Croesus is almost done with the head model of Commander T'Pol, and we are eager to share the results with you!

Captain on the Bridge!

Work on STE:M is going on slowly but steadily - this time, we show off the Launch Bay and the Captain himself!

Although diplomacy is usually preferred over combat in Star Trek, STE:M is still an FPS, thus weapons play an important part in gameplay. In this short...

Flight of the Phoenix

It is not everyday that a project is resurrected by its fanatic developers, and still less commonplace to do that along with a complete engine change...

The Design Doc was created by JohnBart with some illustrations by Flanker. Demo script that was written by Croesus and friend but re-written and finished...

A map that was not added to the main files. Map started by HerbieZ and taken to the current stage by LordfHorusNL. The Launchbay Beta was the first major...

Source files for coding all of the assets with 99.9% coded by UntouchableVash (David). If used, please give credit to owners. Thanks.

This is a non complete, Proof Of Concept version of the mod. With several maps to roam around giving a good example of the work produced for the mod...

These are optimised rebuilds of the Enterprise corridors and bulkheads. Models and textures created by Dennis (LordHorusNL) If models are used, please...

Here is a small video of the detail in the latest map "Launchbay" with sound produced by Trent "Basstronix" Robertson and Naomi.

Shame this died. Would have loved to have played this. There was never really a Star Trek game that "did it for me" like this one promised to.

Damn man! I just found this! Would loved to have this mod!

It is with great sorrow that I commit thee to the grave once more.

Guys, wouldnt it a pitty if all this stuff is lost and never will shown to public? Ok the game is sure und truly dead but what about releasing just a kind of virtual tour of the ship? Nothing big to do there, just for fans to walk around a little bit.

IT'S ALIVE, IT'S ALIVE. *Cackles Maniacally*

if the guy who made that excellent darkelf mod is on the team,then I'm def. tracking this mod :)

Yeah its dead... I am poking around with it,transfering and improving files for Cryengine 3 free sdk. But its just for fun,there is no team, or time to make a working demo...

as there's no reply to this comment ill presume its dead as well :(