Star Wars Battlefront II Remastered is an upgrade for the old Star Wars Battlefront II game.
While the gameplay itself already supported higher resolutions the menu interface did not. As a result the galactic conquest looks pixelated and stretched and furthermore there is a very limited amount of supported eras because it is not possible to display more then 5 at once.
This mod contains new HD background images, fixes for the stretched and pixelated content on widescreen Displays and additional support for more eras and game mods. Furthermore this mod comes with soundfixes and ai hero support for ALL eras maps and mods that do not already support it. But if you prefer the pure Battlefront II feeling you can disable this on a new settings page.

Special Thanks to Rayman1103 for this sound fixes and AI Hero script!

Make sure to read this detailed description

Further problems or feedback?
Feel free to contact me here on Moddb,
or on Gametoast or on Discord: Anakin#4516 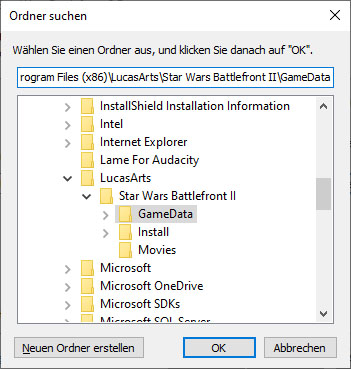 Another frequently asked question is about the resolution not changing for steam users. This mod does actually not change the resolution. You can force the game's interface resolution through a launch parameter. But this leads to a messy interface and this mod cleans it up. There is a new shortcut created that pass the launch parameter automatically to the exe. Anyway, if you have a different resolution or want to start the game from the steam interface you need to change it. The following pictures descripe how to do it. 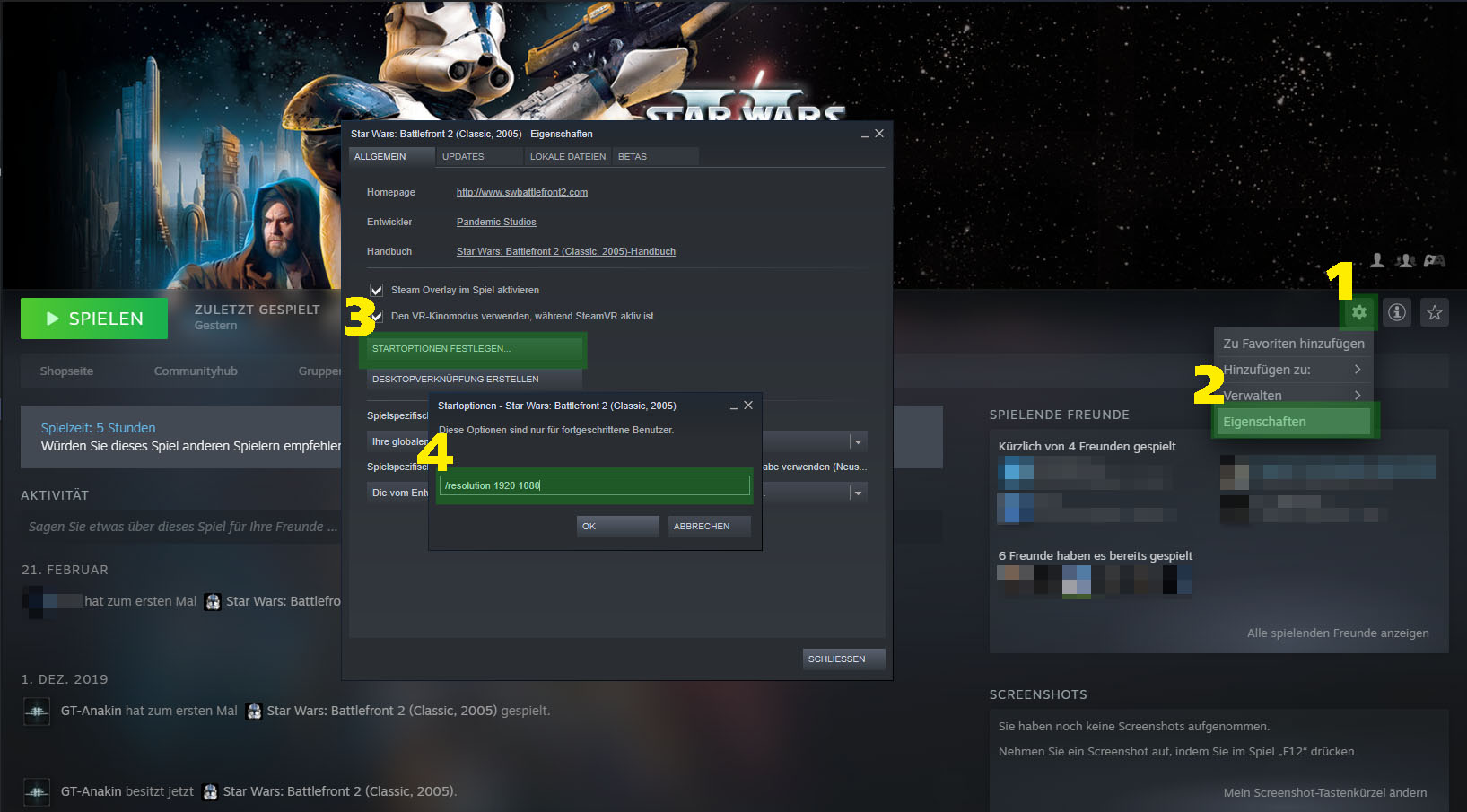 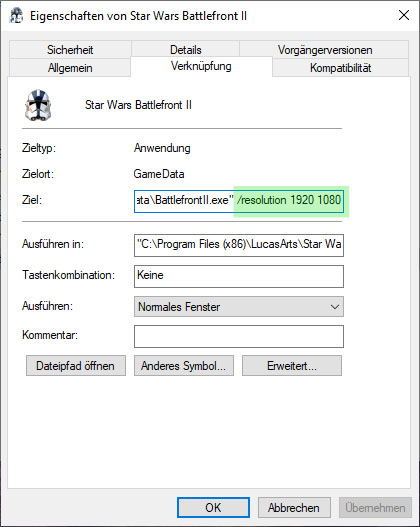 The remaster settings page, one of the main feature of the mod, has been reworked completely. There are now multiple tabs (1) on the left side. On the first tab there are the quicksettings. Those are simple toggle buttons and most of the settings you should already know from unofficial patch 1.3 (uop13). You can no longer change those through the txt files in the addon folder, but only though this settings page. Make sure to press save (10) when you made changes. As i changed a lot of stock files you cannot install uop13 after remaster. Since i include all unchanged uop files, too, you needn't install uop prior. There is no more need for uop13 if you are using remaster!!

Special is the save instant options setting. If you activate it the changes you make to the instant action option is tracked. But only if you go back to the settings page and press save (10) it's actually written to the files.

Developer can add their own quick settings to the first tab or a complete new page under a own tab through custom scripts (see developer documentation for further infos about that).
If those scripts are provided, they are located in the addon\XXX\scripts\ folder. After you add a mod that has those scripts, you need to install them one time. Go to the Script Manager tab (1) and put the mod ID into the editbox (4) and press install (5). Now the script schould be listed in (6), (7) or (8). If the mod offers a localize string, the mod name is shown as well as the 3letter ID. If you remove a mod, remaster should autodetect that scripts are missing and remove them. But it can always happen that something goes wrong, so one major first solution is to delete the RemasterSettings file. It's located in the SaveGames folder. You have many new mods with remaster settings installed at once? You can add a list of IDs separated by a ' ' or ','. You don't remember the 3 letter ID when ingame, or there are really a lot of mods you want to install at once? Just type '*' and press install. Now all possible 3 letter combinations are scanned for scripts. This takes very long as you may remember from Remaster 1.3.
Themes can be changes through the dropdown (3). Make sure to save (10) after changing it and always restart the game when you do changes on the script manager page!! 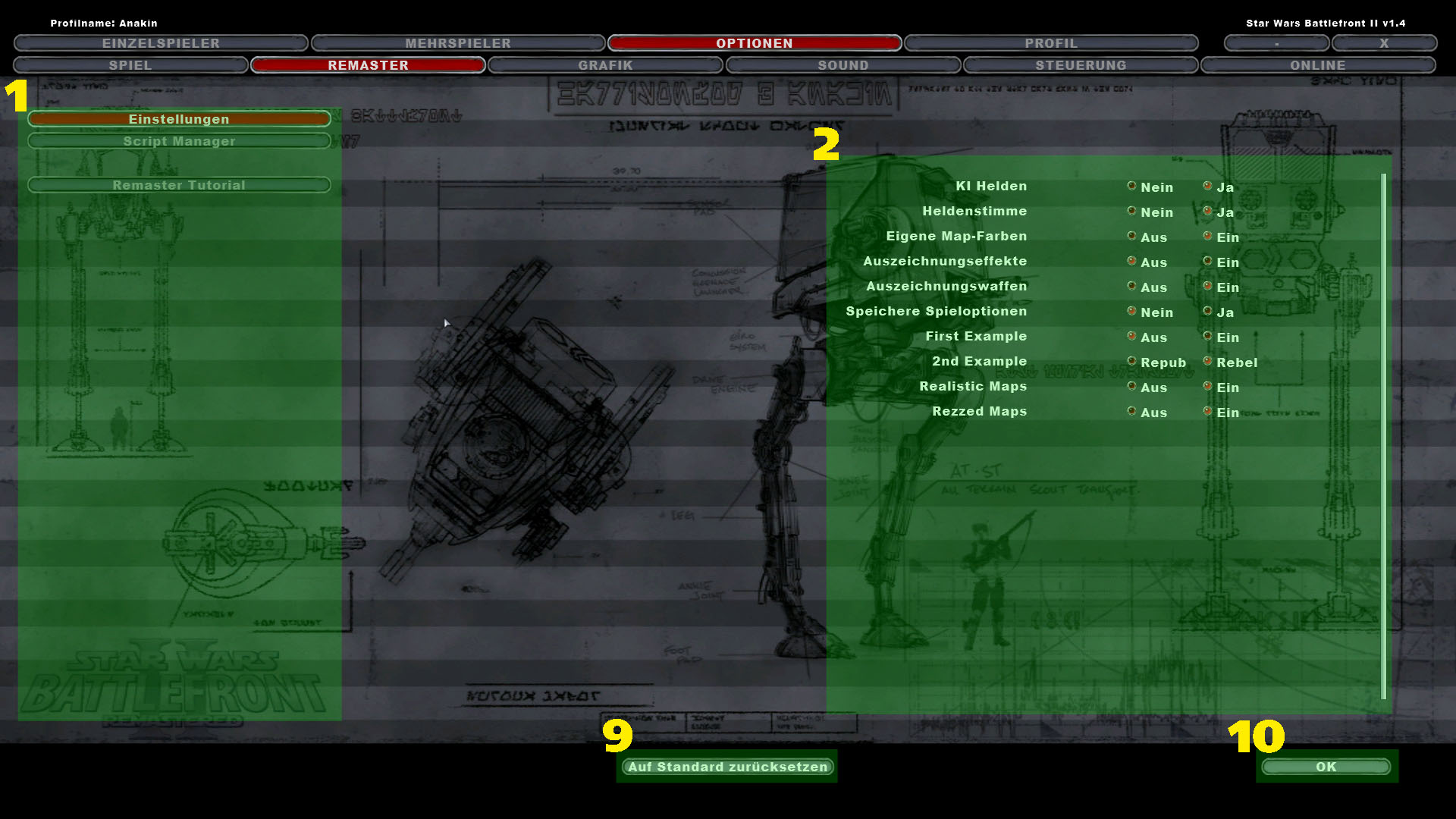 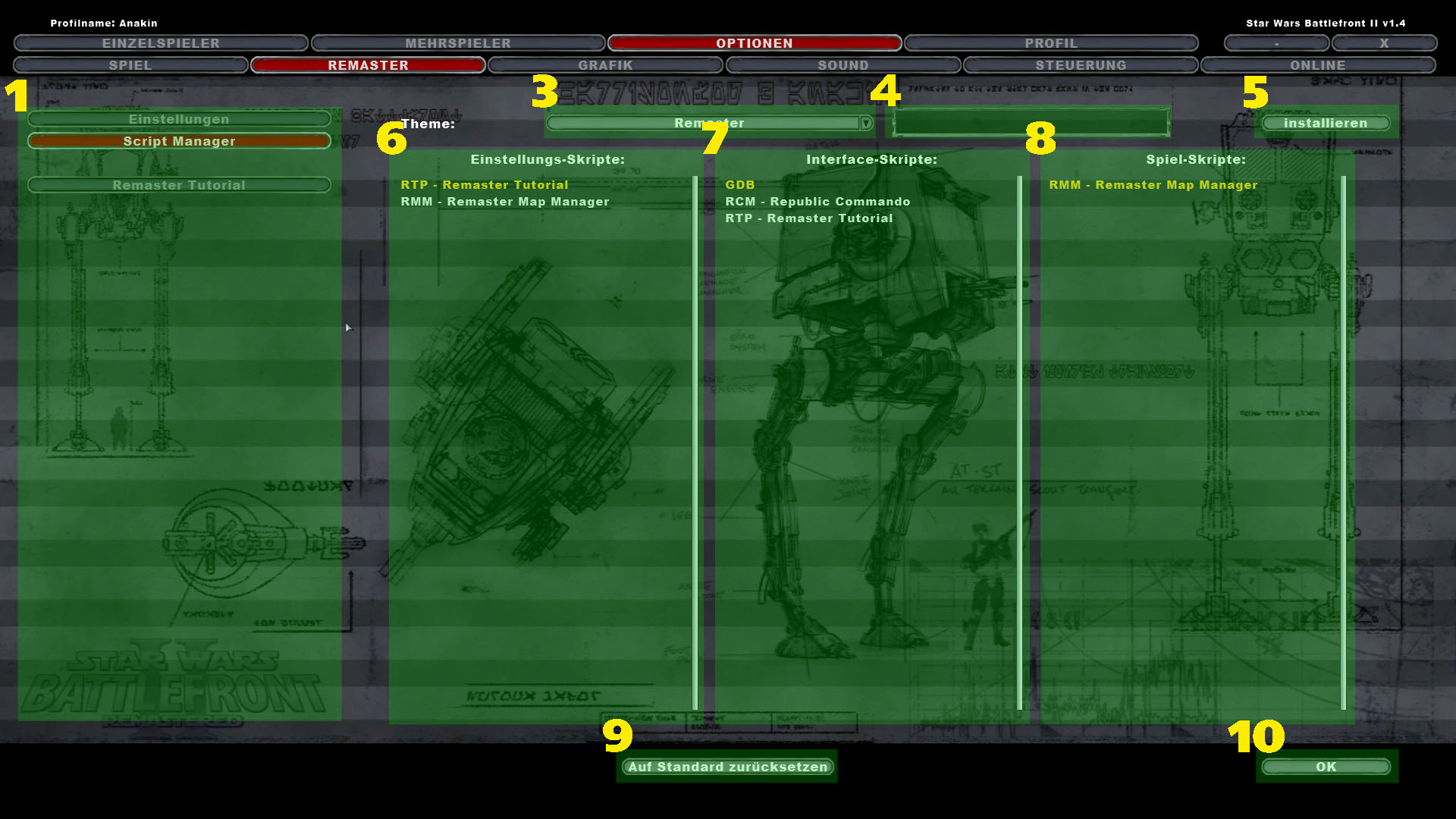 Let's discuss some often problems and changes from version 1.4.

- reworked HUD with new features
- fixed hero healthbar in vehicles
- fixed missing SBD award rifle HUD icon
if there is no HUD you uninstalled remaster. Just reinstall it. If there is a double HUD, you installed uop after remaster. DO NOT DO THIS!!. To fix it, just reinstall Remaster.

- sound fixes by rayman removed due to compatibility reasons
- Tatooin sound fix still included and improved
Well the problem with the sound fixes is the limit of sound memory from SWBF2. Due to this limit it was not possible to include the sound fixes without breaking some big mod's sounds. So i removed them. The only sound fix that is still included is the Tatooine fix. As far as i know it stays in no conflict with any other sounds.

- moved mod to addon folder
By doing this you need no user or gc script for remaster anymore. If there is any conflict or problem you should try to remove user and gc scripts and find out what mod conflicts with remaster. Maybe the new installer does not remove the old file structure and so you have Remaster installed twice. To fix this, delete the remaster gc and user script and the whole Remaster folder in GameData\data\_LVL_PC\

- fixed crash when quit MP match
- fixed black screen bug when saving instant options
- improved data integrity test
I really tried to catch all exceptions for older settings files and every that may happen. Anyway there can still be things left that are not considered. A first step to solve problems with remaster is always to delete the settings file. It's located in the SaveGames folder. This will reset the settings to default.

- new and bigger font for each resolution
- new campaign loadscreens
- major fixes and stability improvements
Well this is all stuff i fixed, but don't remember or is just not worth to be named. Such as the bigger era text boxes, so long era names are now shown completely.

If you have any further questions about the up coming Remaster v1.4, let me know in the comments. Release will be within the next hours or days. I don't know when i find the time to uploade ;)

Remaster 1.4 beta is uploaded! It's time for a test.

There were many complaining about the multiplayer not working properly on steam. Now that i bought myself the steam edition i found the solution.

version 1.5 r2 comes with some fixes. Make sure to read the whole description

version 1.4 comes with a lot of changes. Make sure to read the whole description

Installer yesterday had a bug, this is a fixed version!!! Press read more!! not only the summary.

I updated the HUD with some new features. This is not final and i cannot tell you whether it works for all resolutions and mods or not. But feel free...

Read the following information carefully!!! Press read more!! not only the summary

Anyone know how I would open the Desktop shortcut via Winestable ? I'm playing on a mac and have no clue.

i have no idea. but you just need to pass the launch parameter to the game's exe. if there is a different way in winestable it would work, too

How do I change the resolution? I don't understand German.

you change the launch parameter. and the instructions are in english.

When I launch a game, after I select my character, the screen goes completely black. I can control and hear everything but can't see anything. When I pause the game the screen reappears with the pause menu. Any ideas on what is causing this? I installed the mod properly (installed to the main folder) and the whole remastered menu is working great, just this issue keeps me from playing.

interesting. i'll keep track of it. Did you activate save instant action settings in the game's remastered settings?

Works perfectly. Menu scales appropriately, and with the new updates, the multiplayer menu and text size has been fixed. I can't play without this mod.