RSS Flight of the Phoenix

It is not everyday that a project is resurrected by its fanatic developers, and still less commonplace to do that along with a complete engine change. Enterprise: Temporal Cold War is however one of those few mods - let us introduce Star Trek: Enterprise - M.A.C.O.!

Five years ago CaptainSource (aka RogerRamJet) posted a weapon render on ModDB depicting a Phase Pistol - the iconic weapon of the ill-fated sci-fi TV show, Star Trek: Enterprise. The first image was followed by countless others, and soon the experiment has grown into a full-scale modding project known as Enterprise: Temporal Cold War, aspiring to provide an unofficial continuation of the cancelled series which - in our opinion - did not have the chance to hit its stride.

The dedication was there, but we lacked the experience needed to properly organize development, assess our resources, and attune them with our increasingly higher goals. The reasons of why and how we failed to achieve those should not be discussed here (it would fit more to a post mortem article which I may write up one day); what matters is that around 2009 we lost our footing, and had no other choice but to abandon E:TCW.

A lot happened in the last two years: some of us graduated and (if lucky) started working, others pursued non-gaming projects, but all of us tried to understand where we failed with E:TCW and learn the important lessons from the past endeavour. When the conclusion has been reached, some of us started to act: gaining experience in the previous incarnations of CryEngine, TripTucker decided to pick up the abandoned project, re-assess its goals and resources, and re-launch it with a new name and scope, albeit with familiar aspirations.

Set one year after the events of Season 4, the modification aims to portray the events leading to the Earth-Romulan War in a linear, story-oriented fashion. The story arc itself would be told in multiple one-hour episodes from the perspective of an operative of Earth's elite military organization known as Military Assault Command Operations, or M.A.C.O. Unlike its predecessor, STE:M aims to follow the footsteps of the Elite Force FPS-series in these episodes: gameplay would consist roughly 75% combat and 25% puzzle-solving, sometimes interrupted by free roam sections during which the player can explore the titular starship within reasonable bounds.

Our team is currently busy working on the first episode serving as an introduction both for newcomers and seasoned Trekkers. Some media has also been prepared to show off our progress on that episode.

Below you can see pictures of two furnished test rooms that TripTucker has put together and used them to test the capabilities of the engine - currently he is busy mapping the decks of Enterprise, each of them planned to contain several rooms furnished as nicely as these ones. 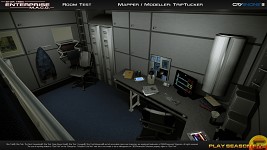 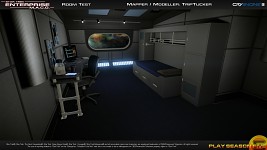 Albeit our current free roam map is in pre-alpha state, TripTucker still managed to prepare an obligatory corridor shot for you - we hope to populate such sections within the upcoming months. 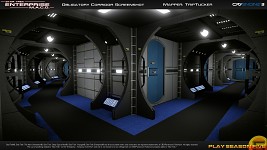 Besides the interiors, we also take care of the ship exteriors as well - this test shot has been created for one of the few cutscenes that we plan to include for the upcoming episode. The ship models themselves were re-used from E:TCW, but all of them received a little overhaul. 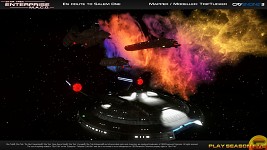 Our concept artist, Flanker, was also busy designing some fanon weapons for the story - below a concept for an experimental Starfleet heavy weapon can be seen which may come handy for the player should they experience heavy resistance in achieving their goals. 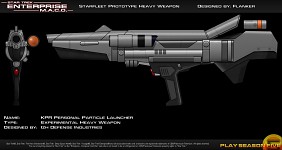 Finally, TripTucker also prepared a present for you: he decided to share the desktop wallpaper he is currently using, depicting the in-game NX-01 from several angles. 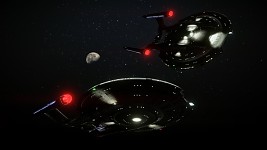 The dedication is there, lessons have been learnt, our goals are kept lower but closer to an achiavable level, and we have imported a great deal of the original model and texture assets to CryEngine 3 - this however does not mean that we do not need your help. We have vacancies in several departments of development, and are actively seeking talents who can help us finish our first episode. At the moment, we are looking for experienced

who can support our project and complete the work assigned within a reasonable timeframe. Of course we may accept applications for other positions too - if you think you can help us out, do not hesitate to contact myself (JohnBart) through PM or by registering on our official forum!

Besides this media release, we already launched our new website and forum awaiting for you to register. Please do not hesitate to join our community if you wish to track the mod and want to receive periodical forum-exclusive media besides the regular media releases!
This concludes our protracted introduction - expect to receive periodical updates both here and on our forum from now on!

Thanks for your attention, live long and prosper!

I heard that the CryEngine3 has gone open source, is this true? Does it mean that you'll have an all-in-one installer package?

Very happy to see this mod back on track :)

It hasn't gone "open source", that means access to and ability to modify the source code, among other things.
They have released a Stand alone SDK for Cry Engine 3, so the possibility exists for a free standalone installer for the mod.

We are not using the standalone SDK because lots of stuff is missing, and we rather not spend time making some stuff over and over again. SO you will have to own Crysis 2, it might cost 10 dollars when we release the mod.

I'm very happy to hear that this project has gotten a second start. I wish you all the best and will be following it closely. I hope you find the staff you need.

I know this is probably too early in time to ask this, but are you looking for Alpha testers? If you are, I'd certainly consider applying for the position!

We will certainly need dedicated testers, but their recruitment will happen in a later stage of development. Thanks for your comment!

Hmm... being a big fan of ENT, I must say that it's great to have you guys back :) I followed your previous intent in HL2 (just brought the game for this mod.) I guess i'm going to buy Crysis 2 this time... I just hope you guys could add other roles rather tham being a soldier all the time... catching the real felling of ENT... Some exploration, engineering, scanning, communications, interactions with NPC, would be great :)

That's exactly what we are trying to do Gen. Konobi.

Trip is currently busy mapping a free roam map of the NX-01 which would contain parts of all decks from Enterprise. The first half of our teaser episode would let players explore these decks within reasonable bounds: interact with some NPCs, solve a couple of hidden quests, and so on...

Oh, and we apologize for having you to buy HL2 to no avail (albeit it's a great game on its own, so it mustn't be a bad deal after all... ;)) Make sure to get Crysis 2 this time only after we released the mod! ;-)