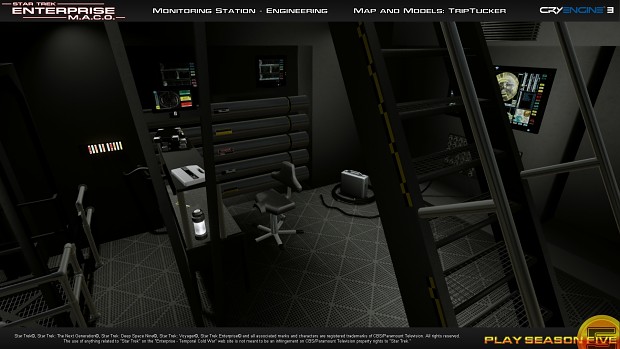 That doesn't look really good to be honest. Looks kinda flat, are you guys utilizing environment probes? The textures seem a bit bland, because of the excessive gray and black.

Especially on the walls, the texture could either use some variation or a complete overhaul, atm it looks kinda repetitive. I know how the "textures" look in the real series and they're almost the same, but the lightning in this scene isn't justifying them in making them look pretty, at all. Looks like concrete here. Maybe turn up the spec a bit?

Also, is tessellation/POM enabled? The floor indeed does look flat, but it could be the angle ofc.

And last but not least, the shadows seem... off? I cant point my finger on it, but it's funny how the chairs half in the shadow bust doesn't cast shadow maps or receives them?

It could be the Config Spec you're running, is it Medium? Or?

Ok I am a Crysis modder. Listen. The only they could do differently is to add a bit more specular to a few of the maps to add a bit of gloss. But I've found that Crysis has horrible indoor shadows. They have shadows on. They COULD add a light source outside of the windows (hyperspace colors) to add some more shadows, but nothing other than that lol.

[edit] I'm not mad or wanting to start an argument, this is just my view of things; [/edit]

Sometimes "fine" isn't enough for someone. I think they can do better, much beter, but if you think this looks good enough, then I wont bash you for thinking so.

But for me, however, "fine" isn't the point where they can just keep it-as. Trying to push something to it's limits, exceed the point where people just click the update away, because it's "Just fine", no, make them want more and more, that is what drove me to criticize these 2 pieces. Trying to create scenes like: Www1.picturepush.com and Rmgameart.com for the people to enjoy. I think they can achieve this quality, easily. But only with the right mindset.

And see how good those screens look, including the shadows? Ce3 has good shadow mapping, maybe even the best there is out there, competing with UDK3/4. It would be weird to have fully functional DX11 with working SSOA algorithms and pin-point S.S.R. but not have proper shadow maps. So please don't try to convey the message to the masses unknown of the engine's capabilities that engine lacks in that certain area, whilst it does not.

I respect you, really, but being nice and telling someone something looks nice won't get them far or won't make them improve upon the scene / object they're working on, because they're thinking they are on the right track, while they aren't. That's the way I learned it, that's the way I'll tell others how to improve, straight facts.

So my bottom line is, they can do much better.

It can be much better, but who has the time to improve it? I am sorry, but we are not bunch of high schooler's and don't have all the time on the world to make it perfect. We are working in our spare time,and sometimes we sacrifice the quality and accuracy of the tasks we do, just to complete them. About Tessellation and other DX11 stuff, not all of us have latest PC hardware, so i decided that we work with what most of us have. We are sorry if it's not good enough for you, everything will be released to the community once the mod is done,even the 3ds MAX files, and you could tweak/redo everything. And about the example scenes you are mentioning, i am familiar with them. And to my knowledge they were working for weeks/months, just on that small portion to tweak them just right. We can't afford to do that, there is whole ship that need to be constructed, i hope you can understand that. No hard feeling or anything. Cheers

I completely understand, thanks for the feedback man.

And I already felt like the hardware was not the best of the market. The scene indeed looks like Medium settings.

And thanks for releasing everything to the community. I will make good use of the files and tweak everything afterwards, because i am one of those students who have loads of time on their hands :)

Thanks for the detailed feedback, Loner. Constructive criticism is always welcome and evaluated, and while our resources are limited (due to the reasons Trip mentioned above), we still try to achieve the level of quality that will please most of our modwatchers. ;)

Keep on with the comments and remarks if you'll have any - this goes to all of you. ;)

Will do john, im trying to help as much as i can, my dad and I are BIG star trek fans. :)

One of the completed corners of the Warp Core.