Currently I'm doing this by myself, I would like to get a team going to help get all this completed faster. 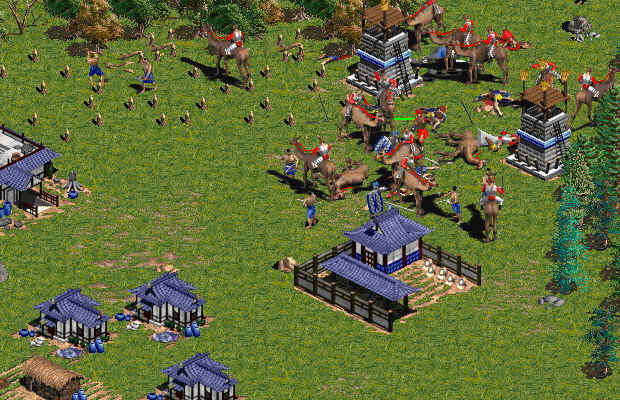 Releasing in February! It will include: 4 new civilizations, 4 new trainable units (without new unit graphics) and new heroes!

List of what researches I'm adding. *I will be adding researches in a later date.

Civilizations - Post what you think there bonuses should be or more Civilizations you would like me to add.
/ = Ends and Starts a New Bonus

Mauryan: Fisherman & Fishing Boats work 20% faster/Stable Units do +1 damage to Buildings/Priest are 20% Faster
Xiongnu: Does not Require House/Cavalry have 25% more HP/Horse Archers have +1 Range and HHA have +2
Hebrew: Priest are 2 time better at converting/Slingers stats increase per age/Fishing Boats have Double HP
Hồng Bàng: Farms have 100 more food/Docks have double HP/In the Bronze Age Infantry, Cavalry and Ships have +20% HP

Trader and Merchant (Trading on Land)

This mod requires Upatch-HD and for help installing the mod, click here.

That's all I have planned out currently

14th September 2016
I've have been working hard at school lately and have not had much time to work on the project. I am sorry to tell you that I will not be working on it for quite some time. For now, I have lost interest in the mod and have moved on to bigger things. So unfortunately I am putting development on hold but will hopefully revisit it in the future.

25th June 2016
Check out another mod I worked on!
Ancient Rivalries [Upatched]

21st February 2016
Thank you Zielarz for contributing a Crossbowman icon, and thank you to FGF87 for what edits he made to the graphic.

The mauryans were a indian civilization founded by Chandragupta. The civilization expanded north to indus river. The Mauryans used Camels, Horses and...

The Etruscan were a civilization in Northern Italy, they had greek like architecture and are probably most known for inspiring the romans in warfare and...

Atlantis was a powerful and advanced civilization that was said to anger Poseidon, the god of sea, so he sank them to the bottom of the ocean. The story...

This patch changes Mauryans bonus and edits there tech.tree to enable chariots.

how do i download? i combined all files and it isnt working
someone can please help?

Please add Turkish Civilization to the mod too, thank you.

It would be nice to add the dacians/thracians. The scythians and the germanic tribes. And also the trojans.

Oh and btw How to install this mod.

Firstly, download and install Upatch. Afterwards, drag and drop the folder out of the Lost Empires.zip into the Mods folder. Then select the mod in the Upatch Launcher in the "Mod Manager" section. Now, it should work.

For me information see: Upatch-hd.weebly.com

Can you tell what program did you youse to edith the game and make the pach ?

I used Advanced Genie Editor 3 to edit the data file, Turtle Pack to add the graphics and Resource Hacker to edit the .dll files. Visit Upatch's webpage, go to "Help" then "Creating Mods" for more information.