March, 2047. A massive nuclear fireball explodes high in the night sky, marking the dramatic beginning to the Third Tiberium War. The infamous Kane has returned to lead the Brotherhood of Nod in a massive global assault on the Global Defense Initiative and the few remaining Blue zones left on the planet. Only you can stop him. The fate of humanity – and the planet – is in your hands.

Next version of Firestorm

Hello all! So I know it has been over a year almost since the last version, and how updates for this mod have gone slow for a while on moddb, but no, the mod is still alive, and I bring you guys some news! The next update is here! (1.65)

So what has changed that caused the long delay? Well, I have been trying to fix so many issues with the mod like crashes that started showing up as well as desyncs and many bugs. Most of these have been fixed, and gameplay experience is so much smoother now!

Well for starters, GDI faction has been reworked! They offer a new arsenal of units:

A T-1 hover unit that replaces the pitbull, but its stats have been altered to be a bit heavier and slow compared to the pitbull
It benefits still from all the upgrades the pitbull had including Mortars! 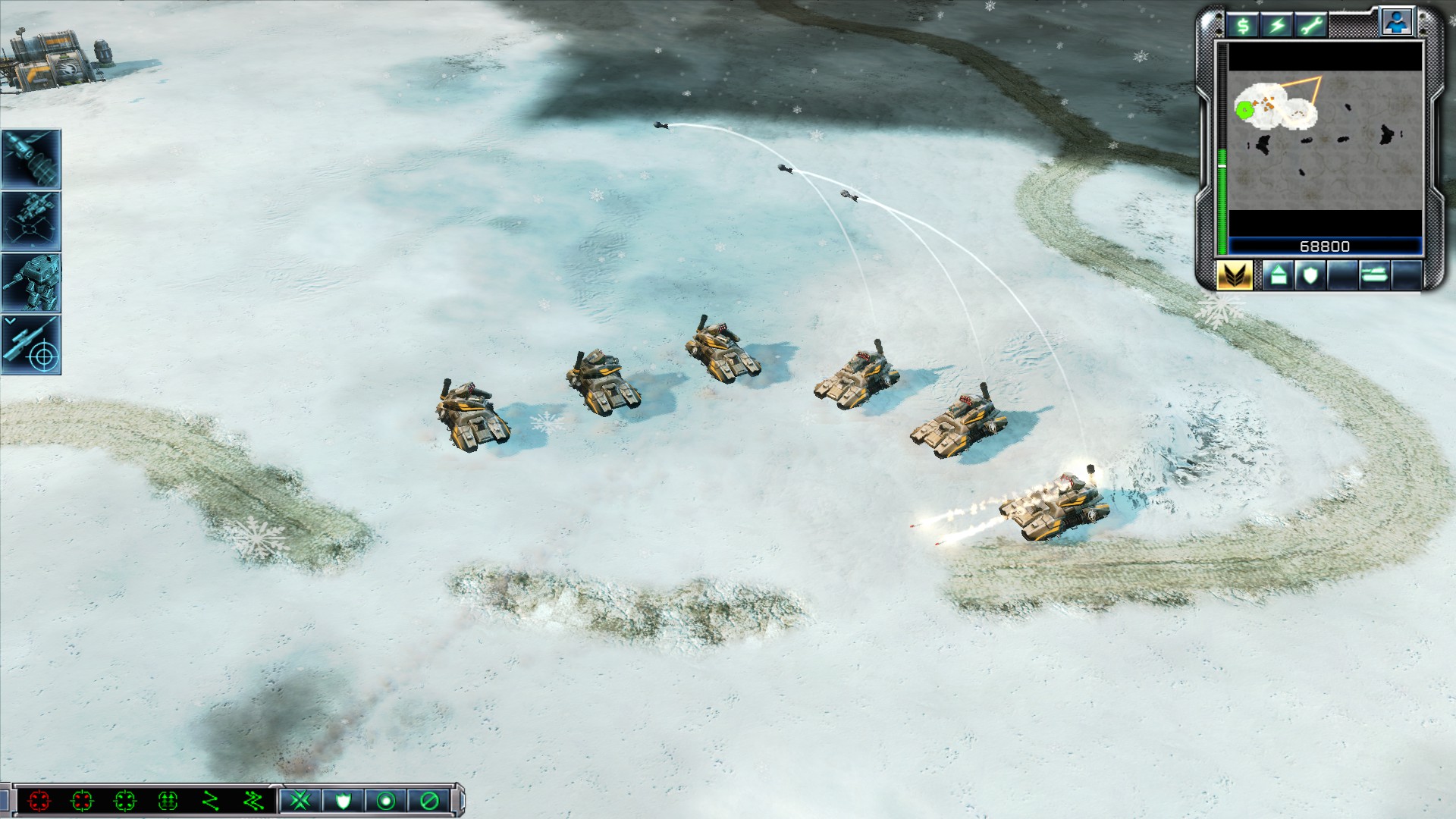 Replacing Guardian APCs in the anti-infantry role, these units are more capable in shredding infantry. They benefit from the APCs former upgrades like HE Ammo 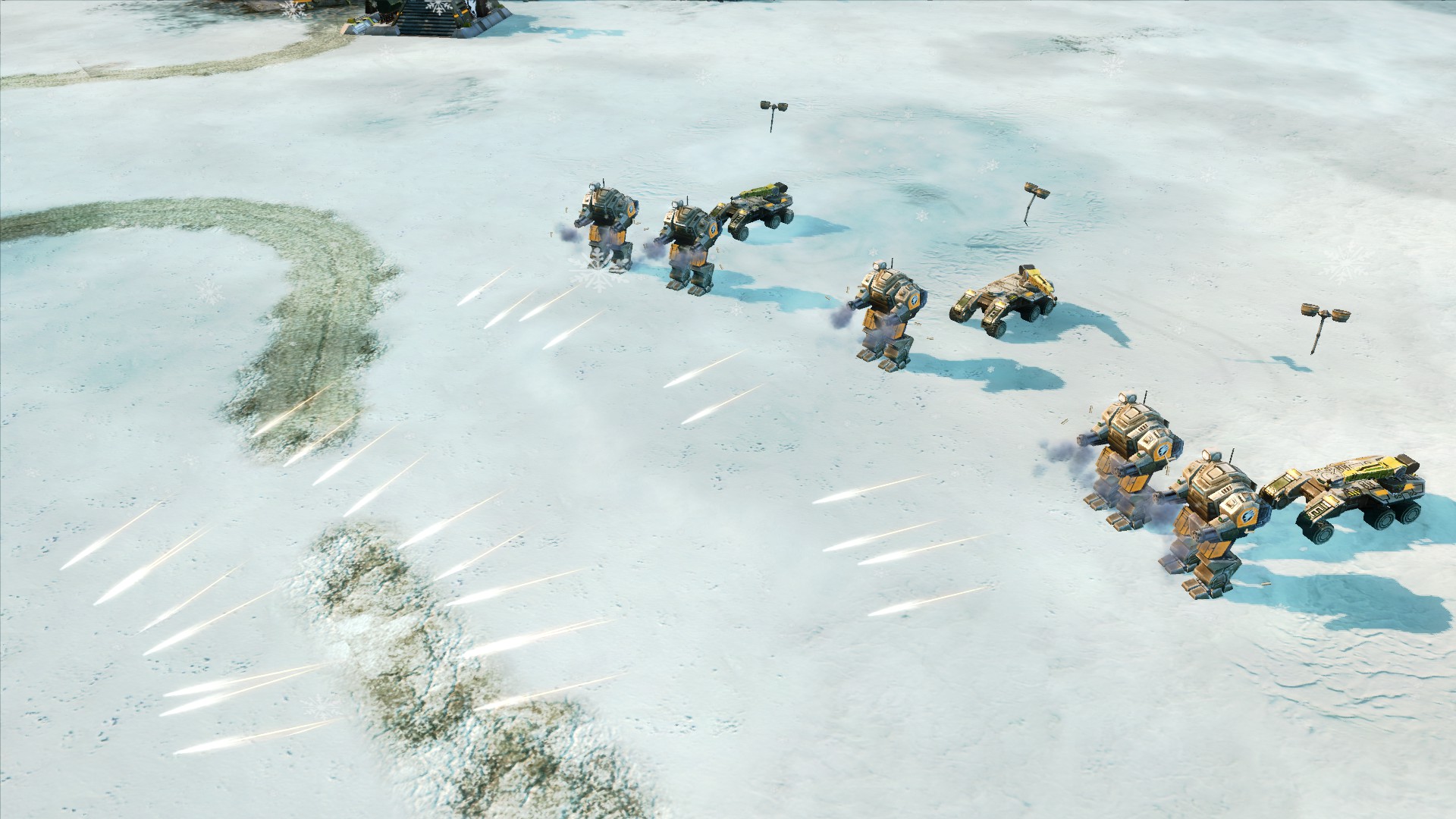 Now Guardian Tanks/Guardian Robot Tanks have been removed for now, and instead, they have been replaced by a new unit. Meet the Mobile EMP Cannon! 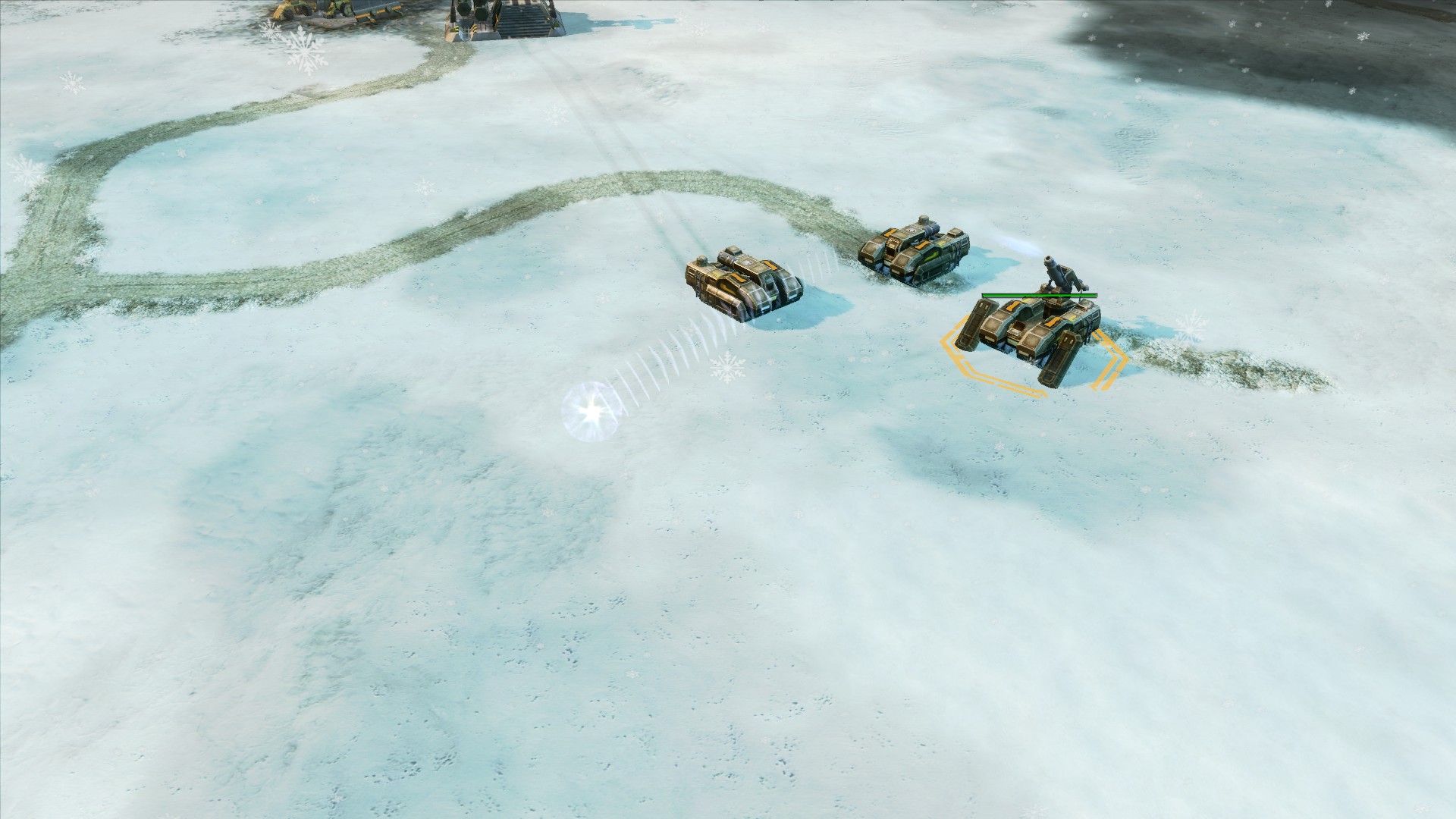 extremely fragile, this unit fires a ball of EMP that has a massive radius. Beware though, you can only build 3 of these guys, and they have a super long reload time. So keep them guarded! 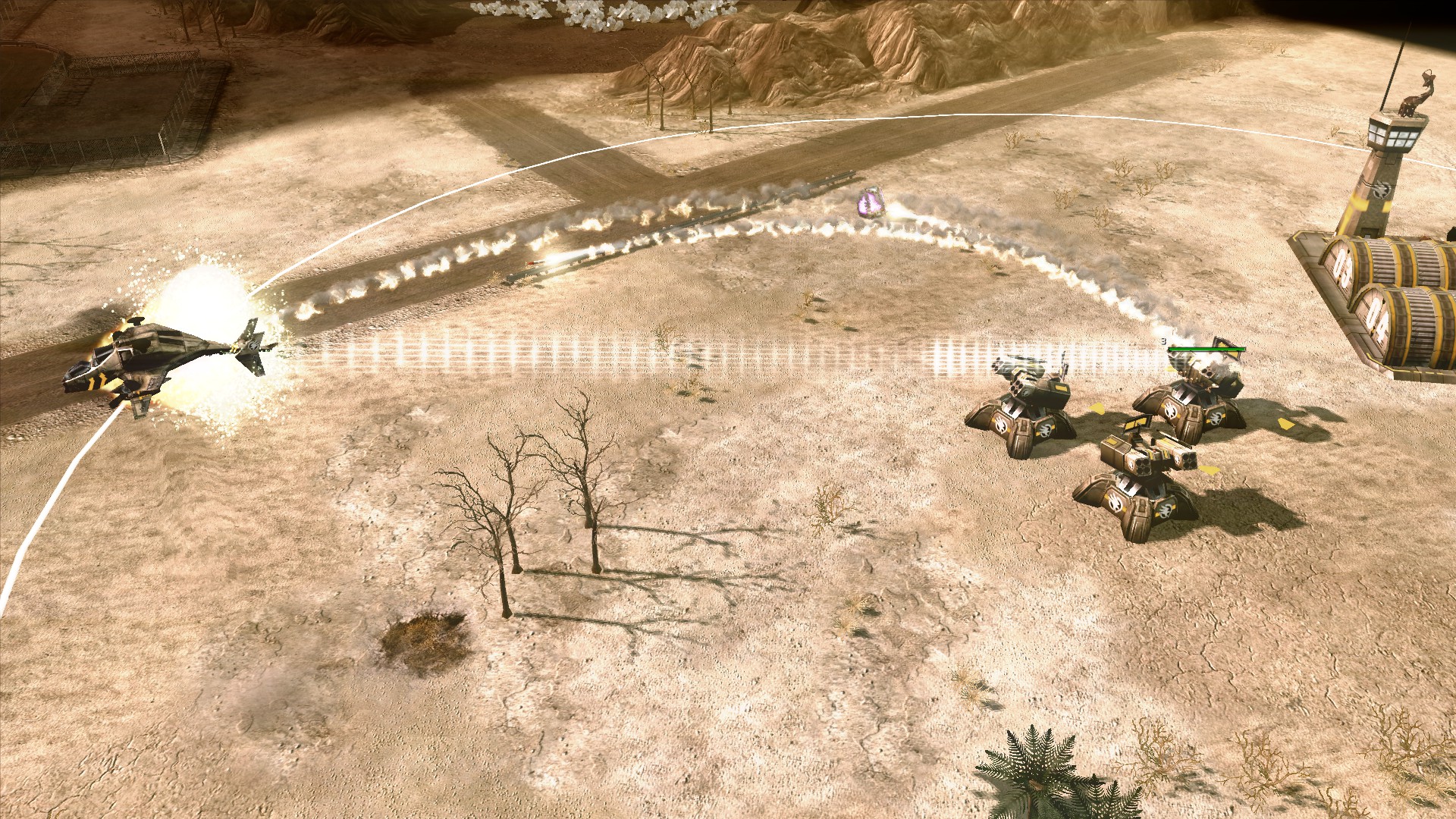 Replacing AA Batteries, these new defense turrets shoot missiles (obviously) and have 2 abilities. They have a Lock-on ability (kinda like laser lock, the turret in the back) or normal mode. They benefit from Thermobaric missiles upgrade. 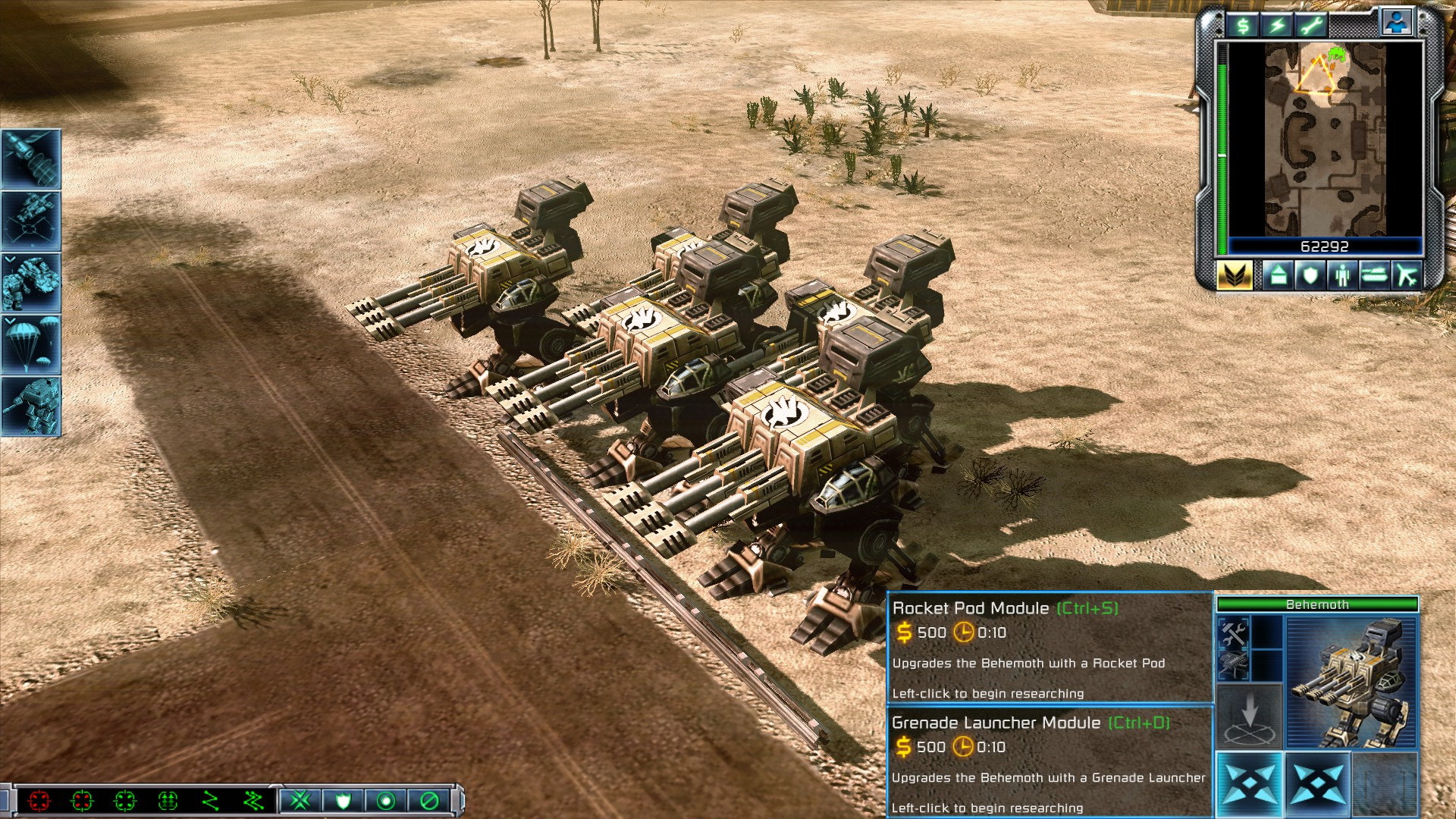 We all know the KW Behemoths and Heavy Harvester (replacing Zone Juggernauts and Rocket Harvesters respectively), but the Behemoths have something different. Now, garrisons for this unit will not work in TW because it would break the unit's AI, so instead I gave it modules like the Nod Purifier. It can be upgraded with either a Rocket Pod or a Grenade module.

GDI does have a new upgrade as well: "Rail Gun Accelerators" 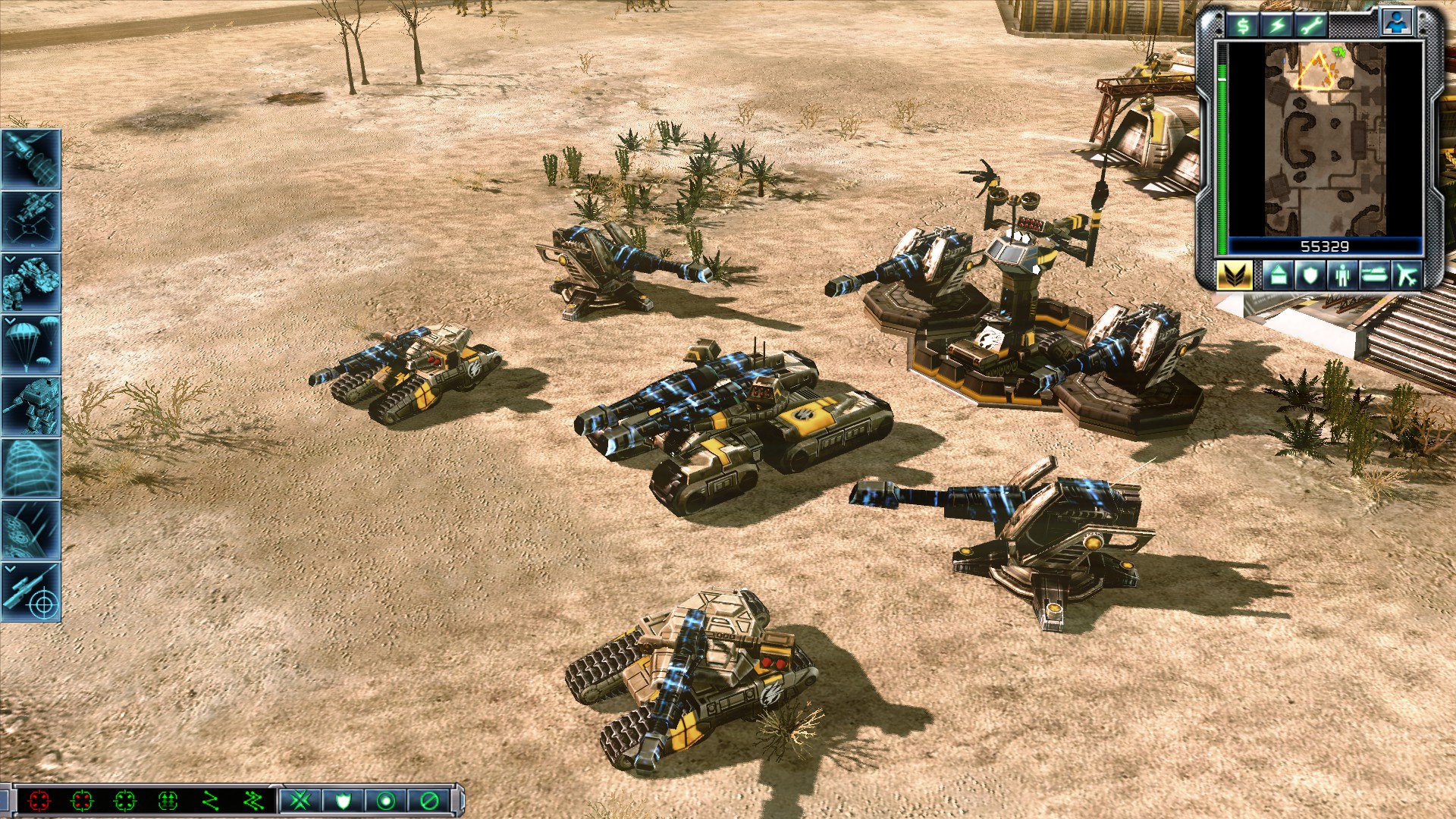 speeding up the slow rate of fire of Rail guns, this upgrade makes railguns comparable to sonic shells now (Only accessible once normal Rail Guns upgrade has been purchased)

There are a few major changes to Nod, but not as much as GDI. However they mostly got a lot of balance and quality of life changes (will be mentioned in the changelog) 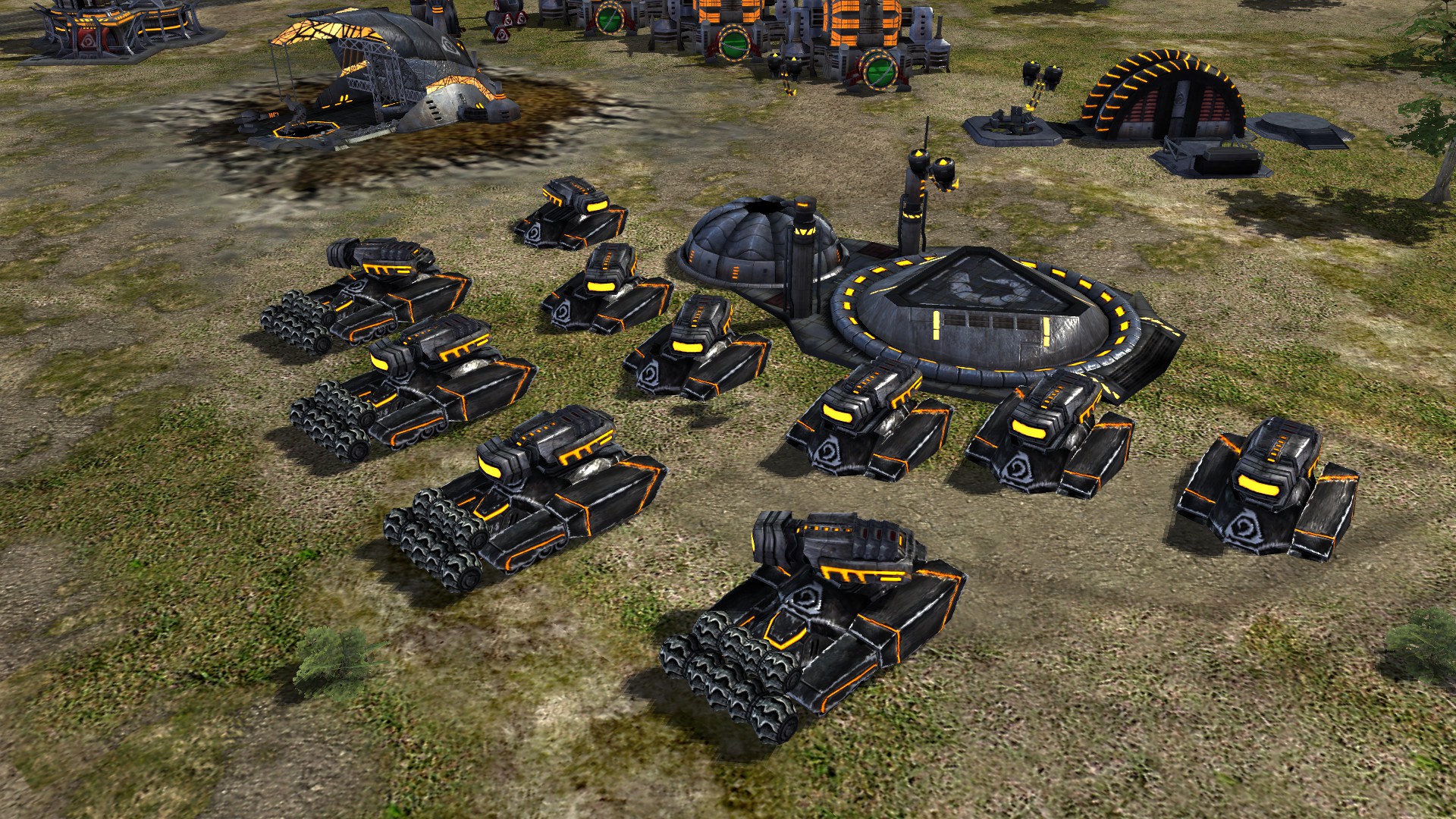 This new design of the Beam Cannon will make it more suitable for defensive positions, it will be able to crush heavy infantry on the get go, clear mines with ease, and once deployed, it gains a small armor buff that should help it stay alive much longer than usual. 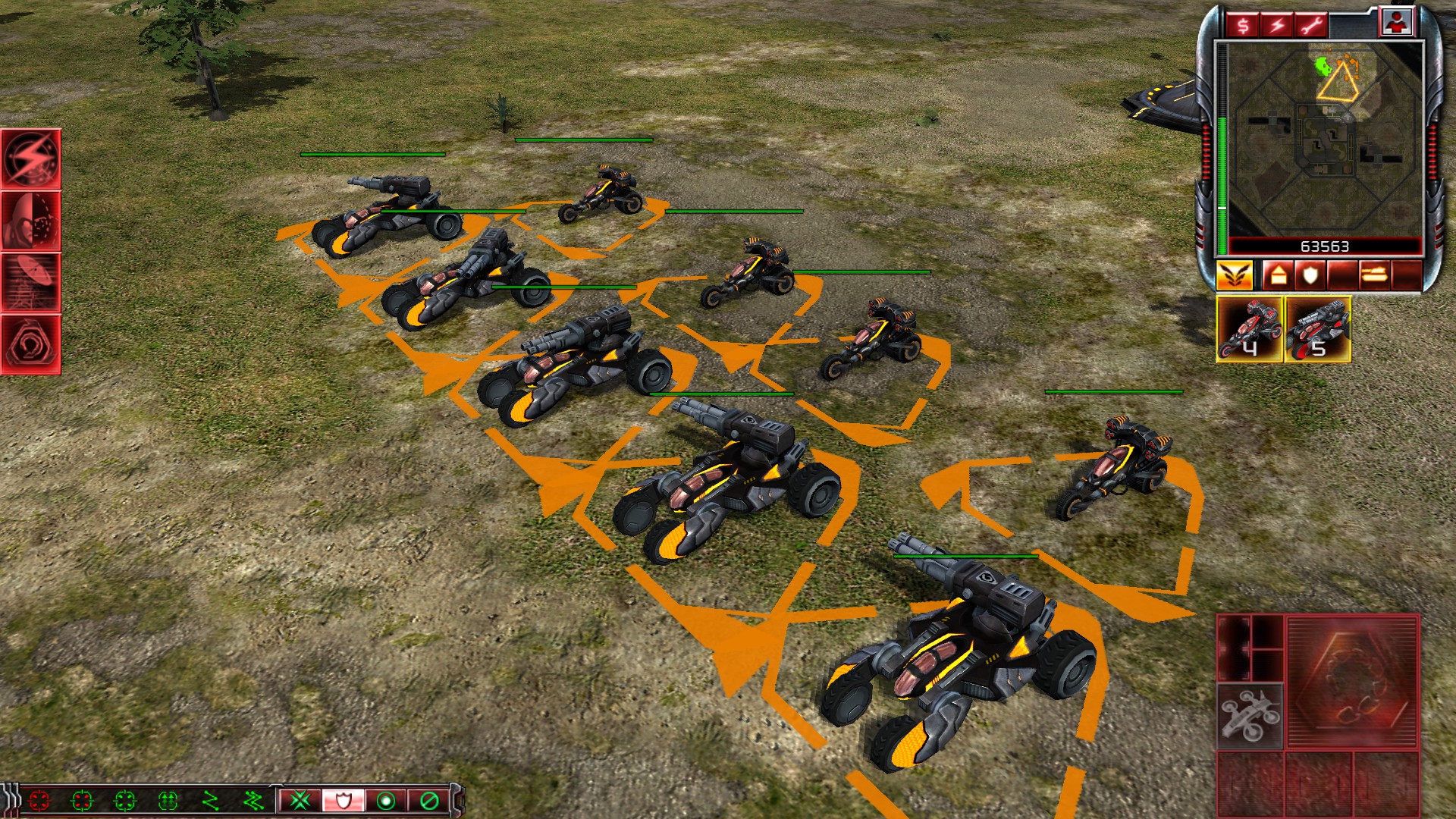 Attack Bikes have gotten a new model! As for Marauders, these new units are a replacement for the Raider Buggy. Instead of a machingun, they have a shotgun weapon like shredder turrets, have more health, but benefit from the same upgrades as Raider Buggies. (EMP Coils and Charged Particle Beams) 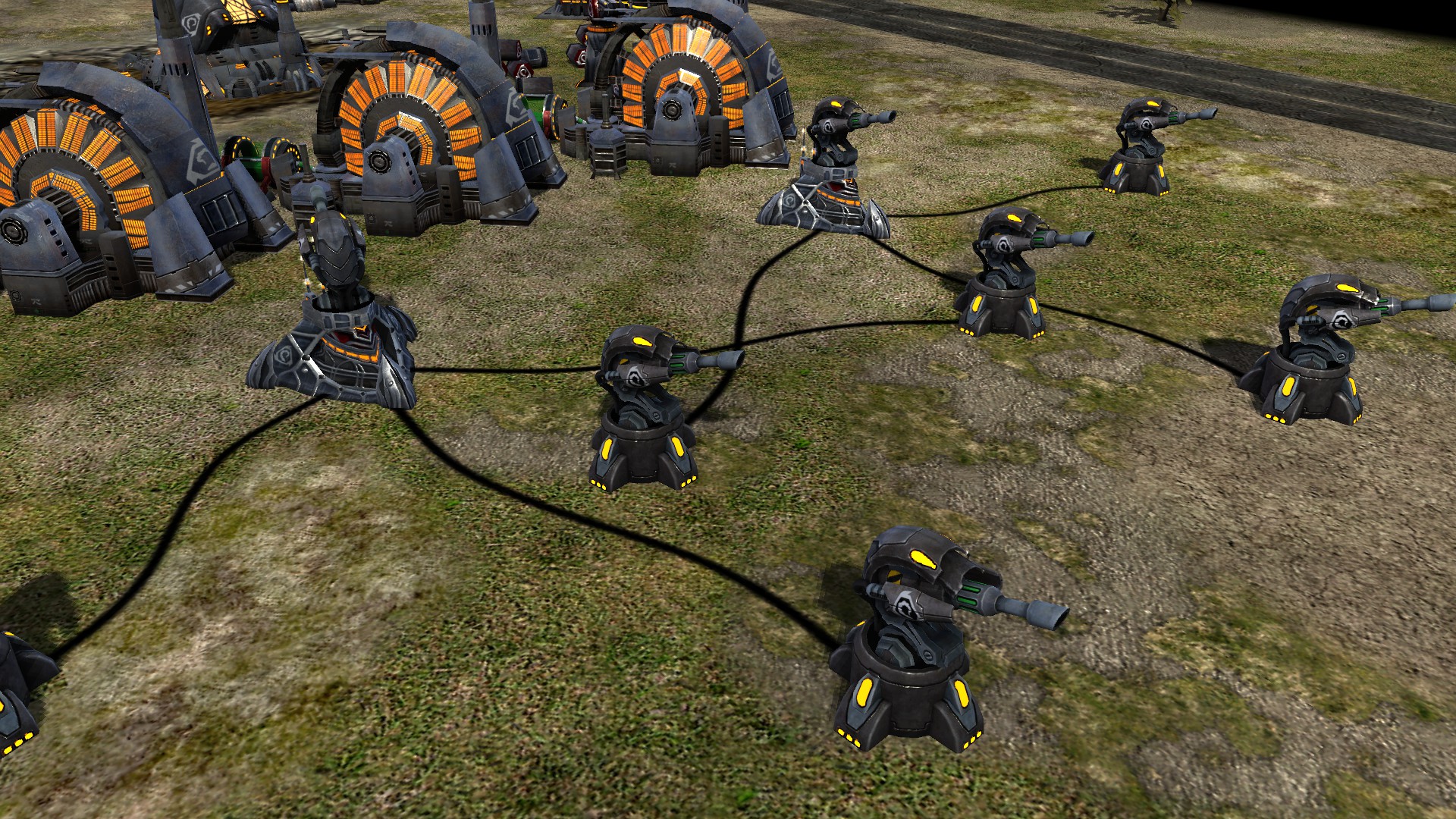 These new laser AA turrets will be replacing the SAM Turrets. Benefittin from Purifying Laser and Quad Turret upgrades, these new AA turrets will make quick work of nearby enemy aircraft.

Now for Scrin, they have no new units or new defenses. Instead they have a new "Tech Center" similar to GDI's Advanced Research Lab/Nod's Temple of Redemption. 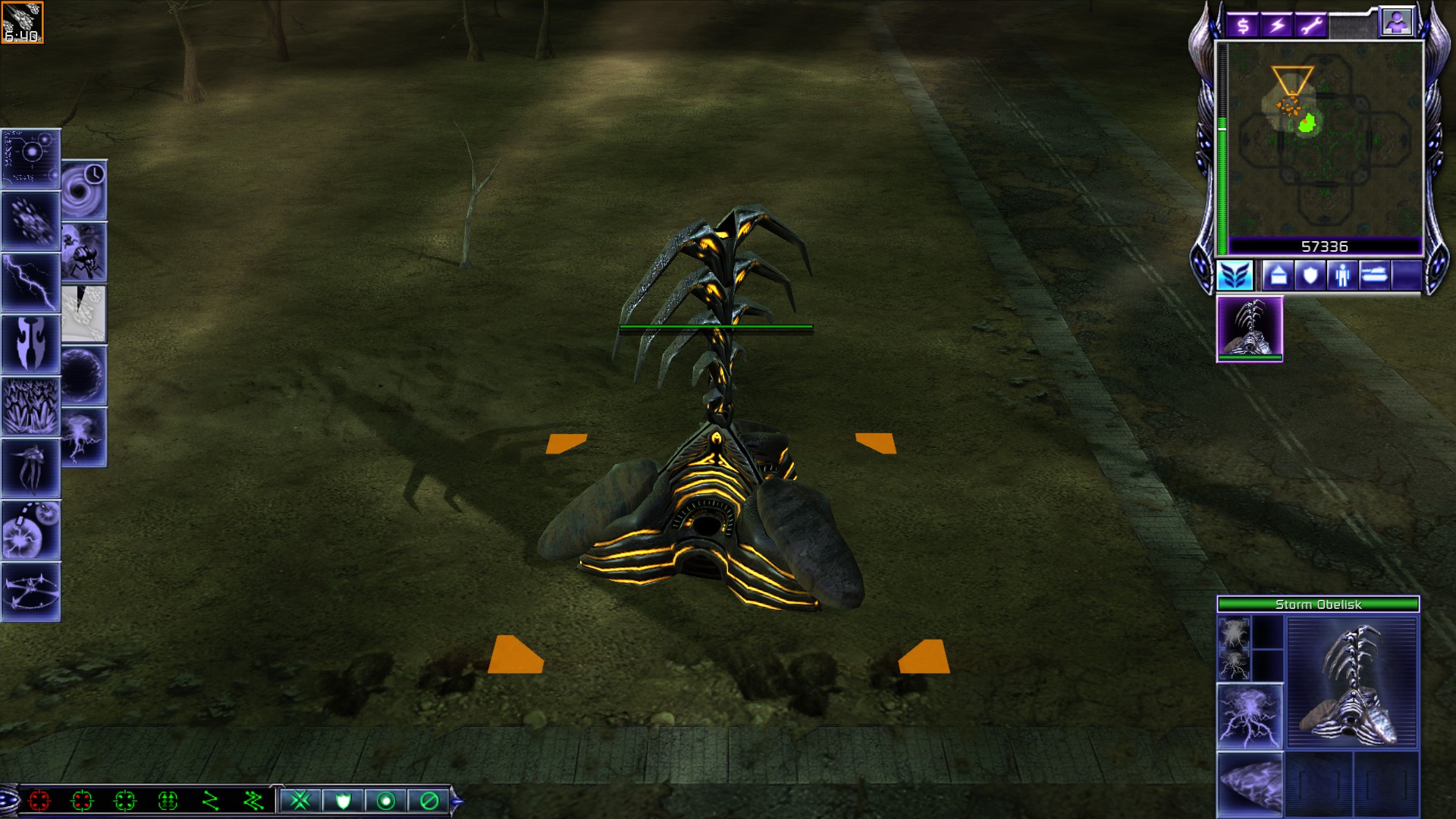 This new structure so far only provides 2 upgrades and 1 support power.

The support power is a deployable Ion storm which can be placed anywhere on the map and it lasts for some time. As for the upgrades, one of them is the Ion Storm armor upgrade which you all know. The other one called "Ionizing Atmosphere". Once researched, an ion storm will spawn above all main structures including the Rift Generator and Control Node. 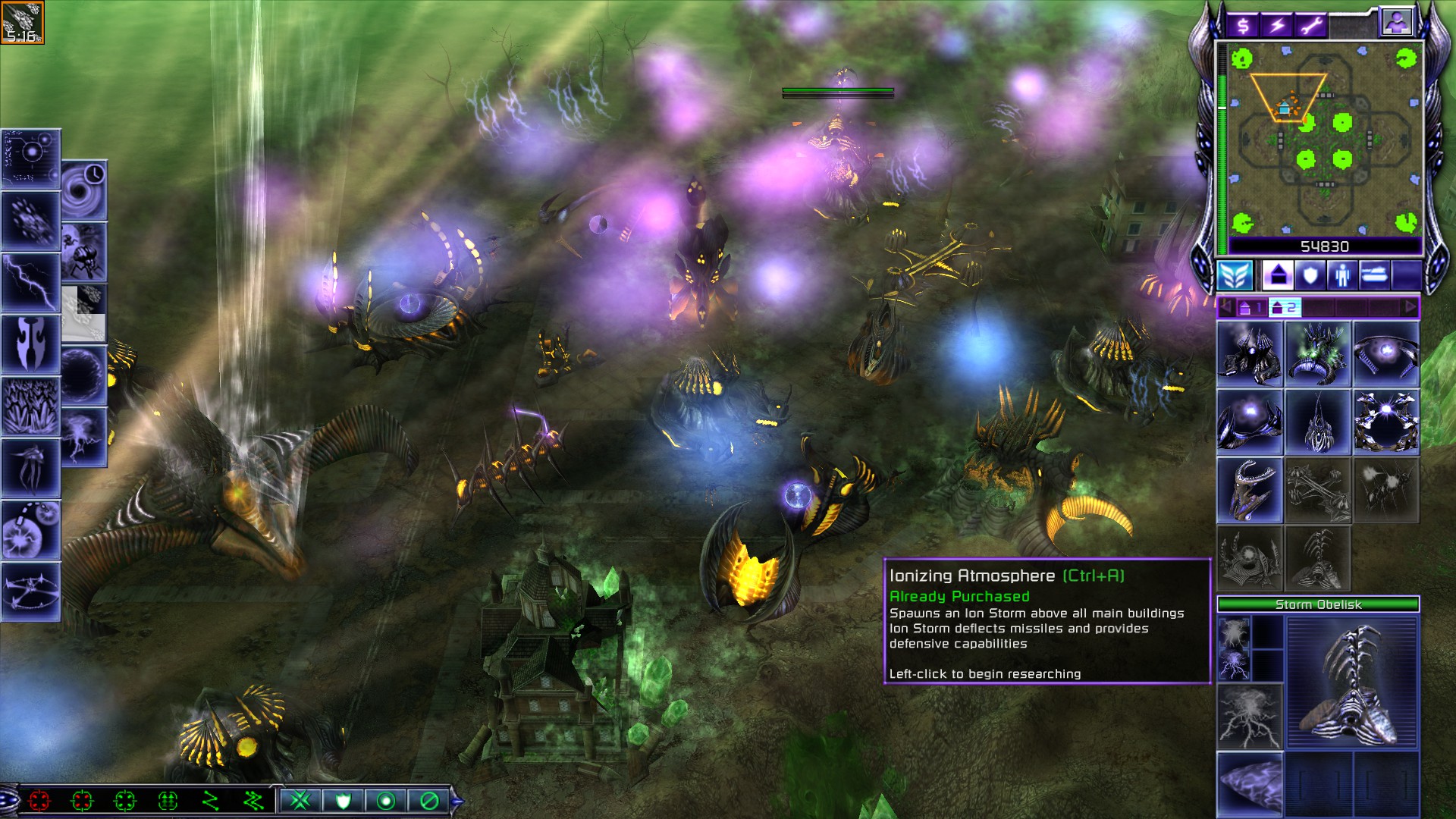 Other than these new updates covered here for each faction there are many more things not mentioned, including QoL changes, bug fixes, balance changes, and more which are all covered in the changelog.

However, onto the major miscellaneous changes:
Engineers can now repair damaged civilian buildings! 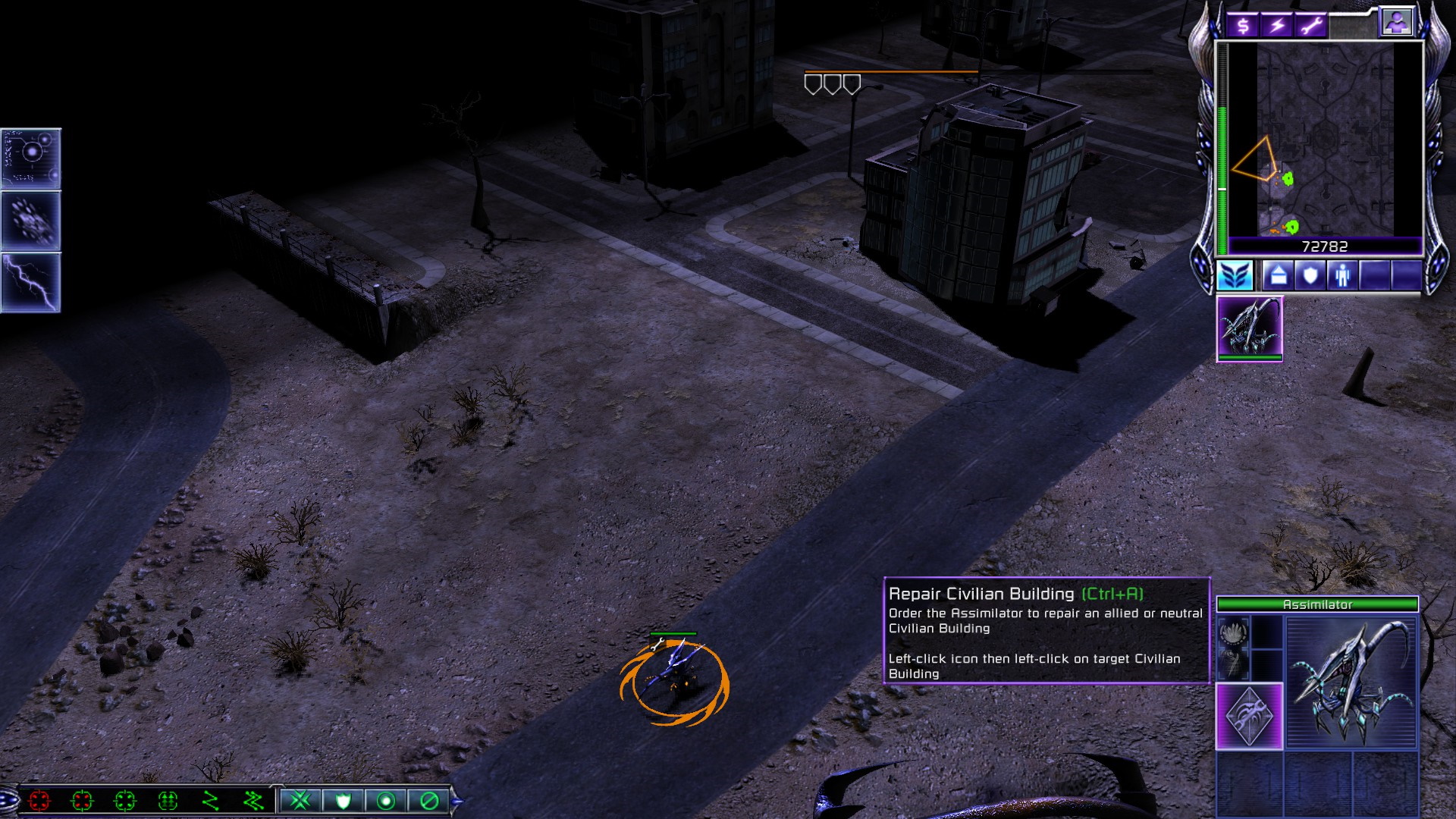 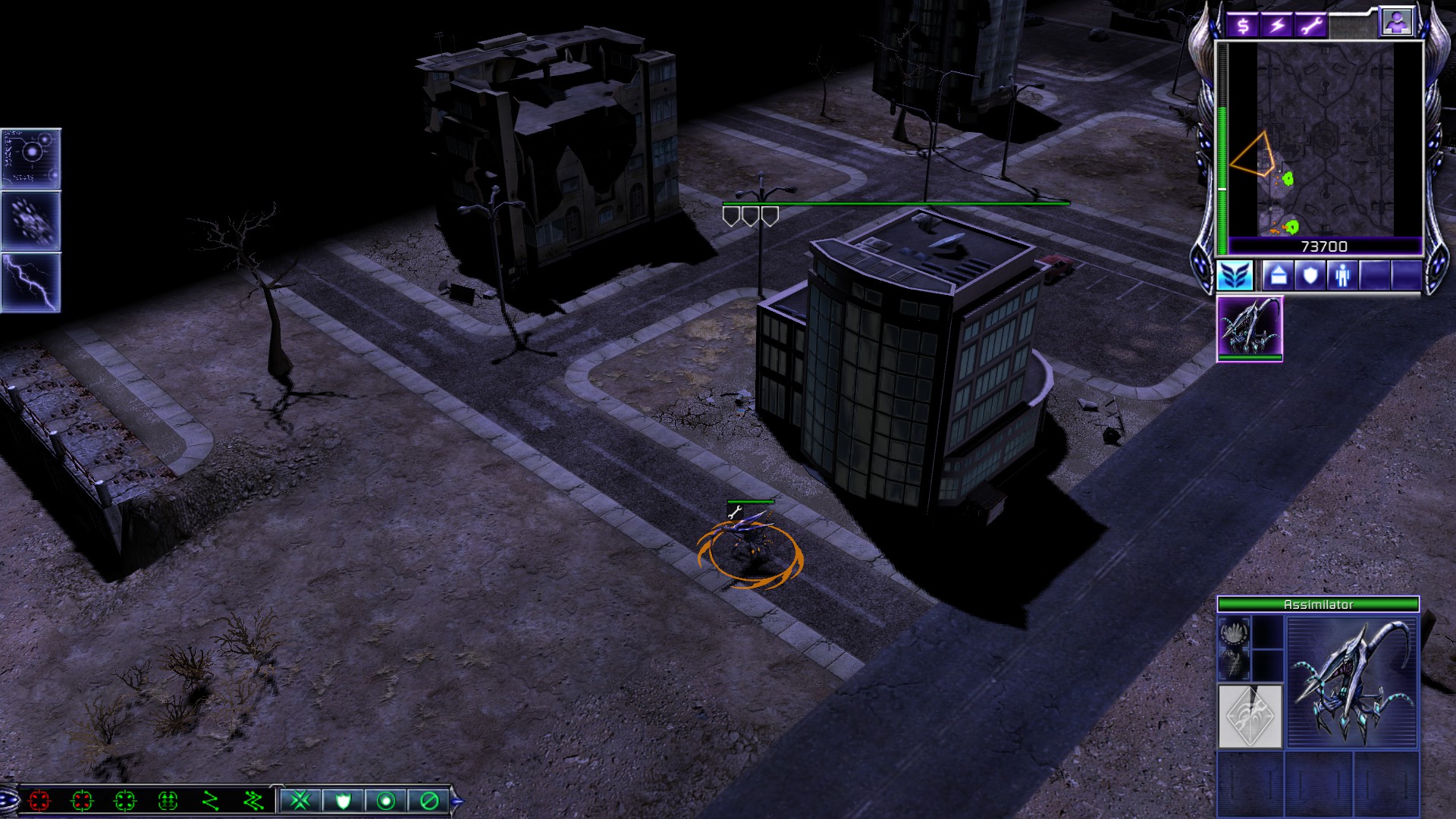 This ability exists for all Engineers, and they won't be consumed like how the older cnc games kill the engineer when they repair civilian structures. (Also you still will be able to garrison the structure if you wish, but ability can't be used while garrisoned)

Another thing regarding civilian structures, garrison clearing these structures have been reworked! Anti-garrison units/structures (exception of Buzzers and Incinerator Tower) will no longer instant garrison clear, but take out a squad one by one, member by member. This increases the effectiveness of garrisons instead of them being wiped out in a single hit 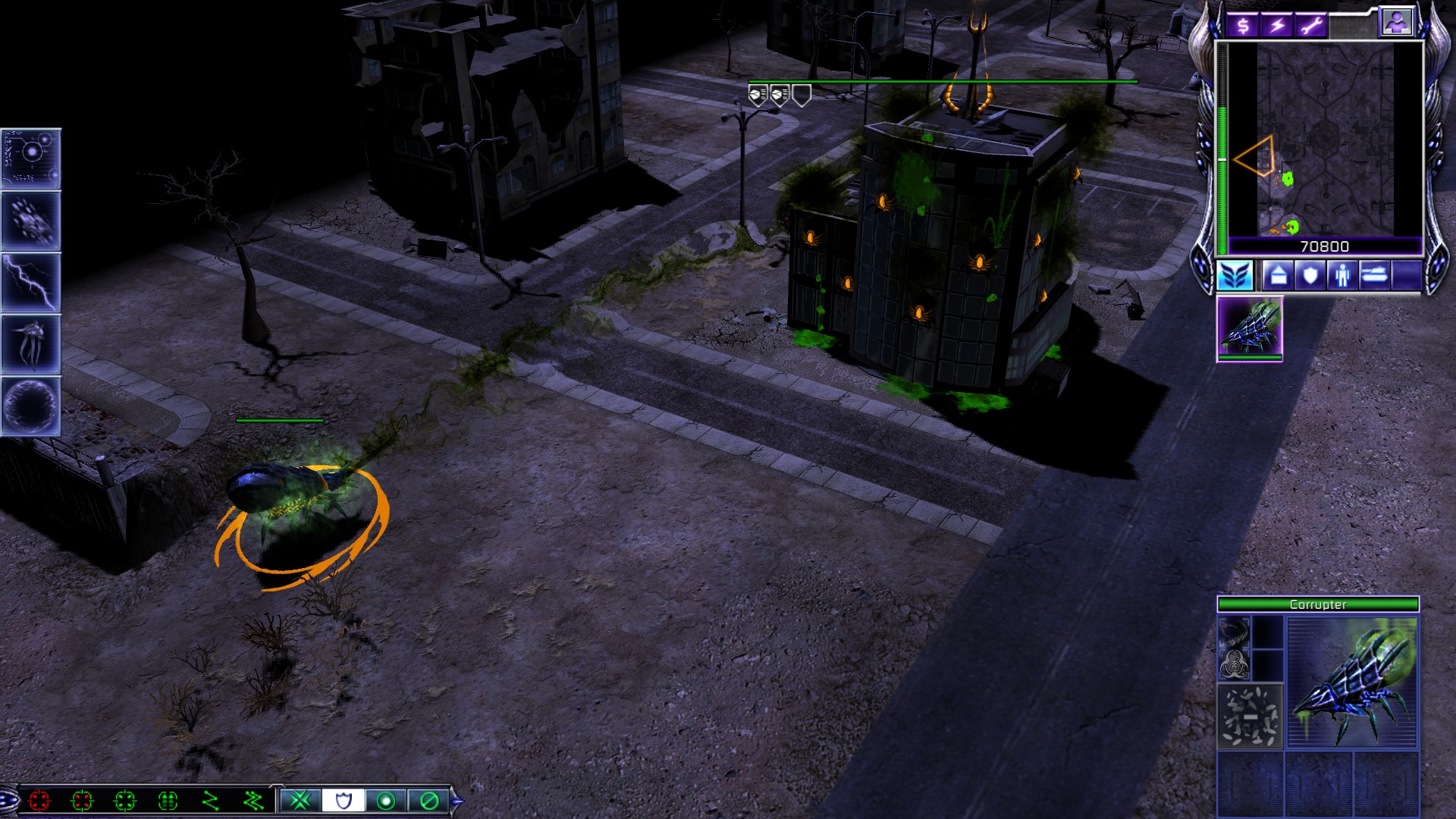 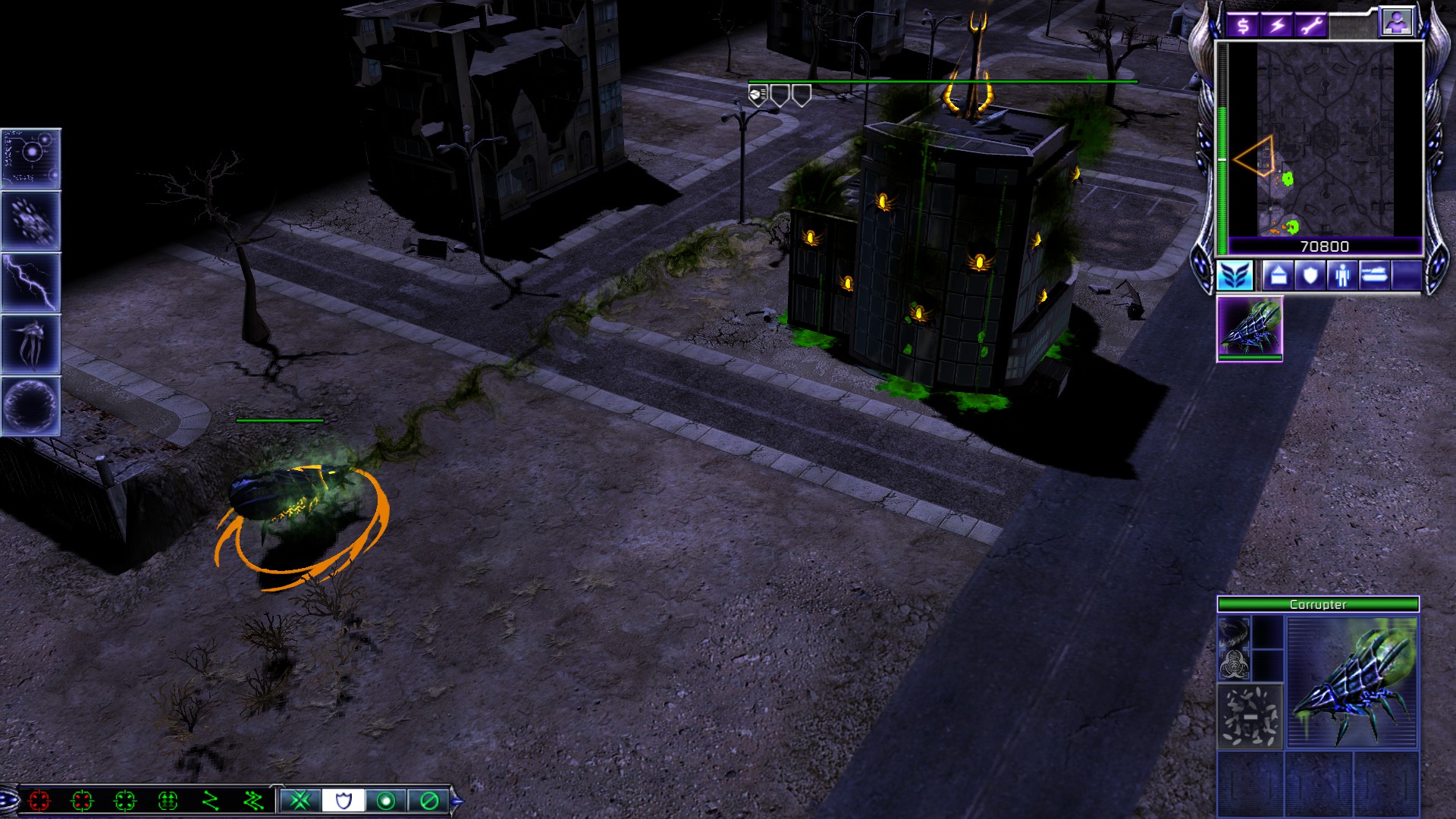 Other than this, most miscellaneous changes will be mentioned in the changelog.

Finally, to end this article, more skirmish maps have been added!

> FS Tournament Simulation (Made by Metaph4r

The Tower Defense map has also been redesigned! (By Kella) 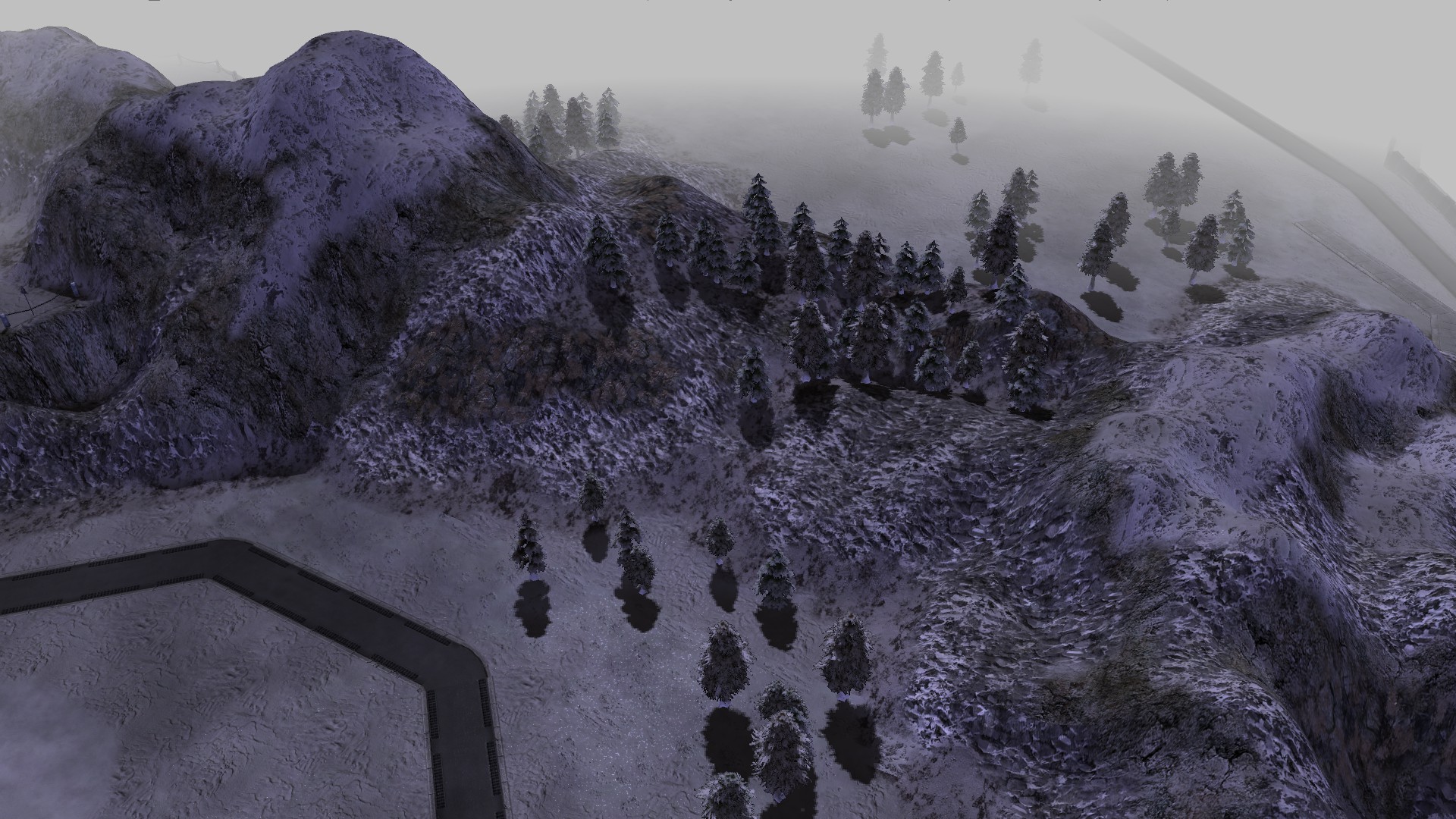 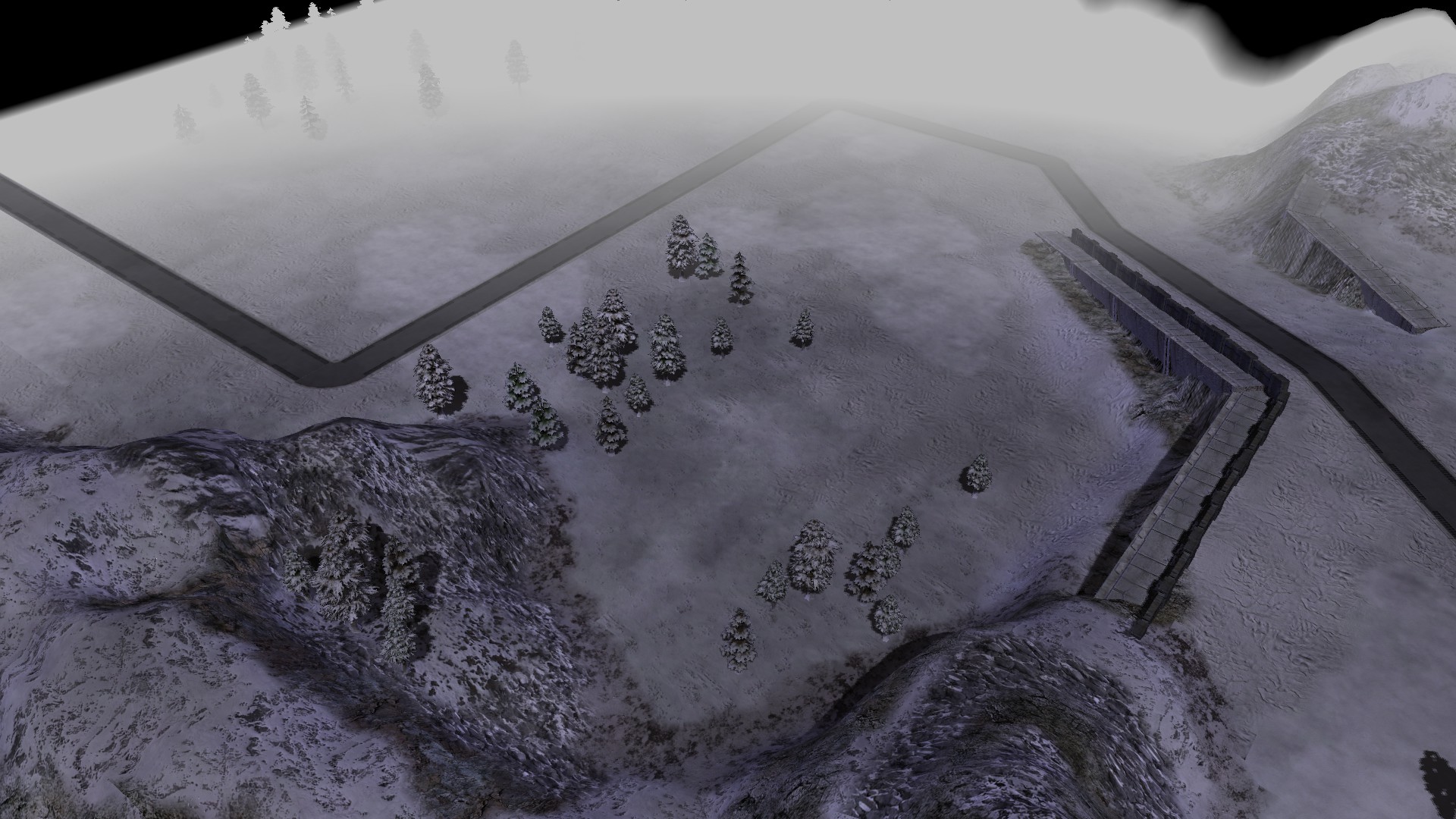 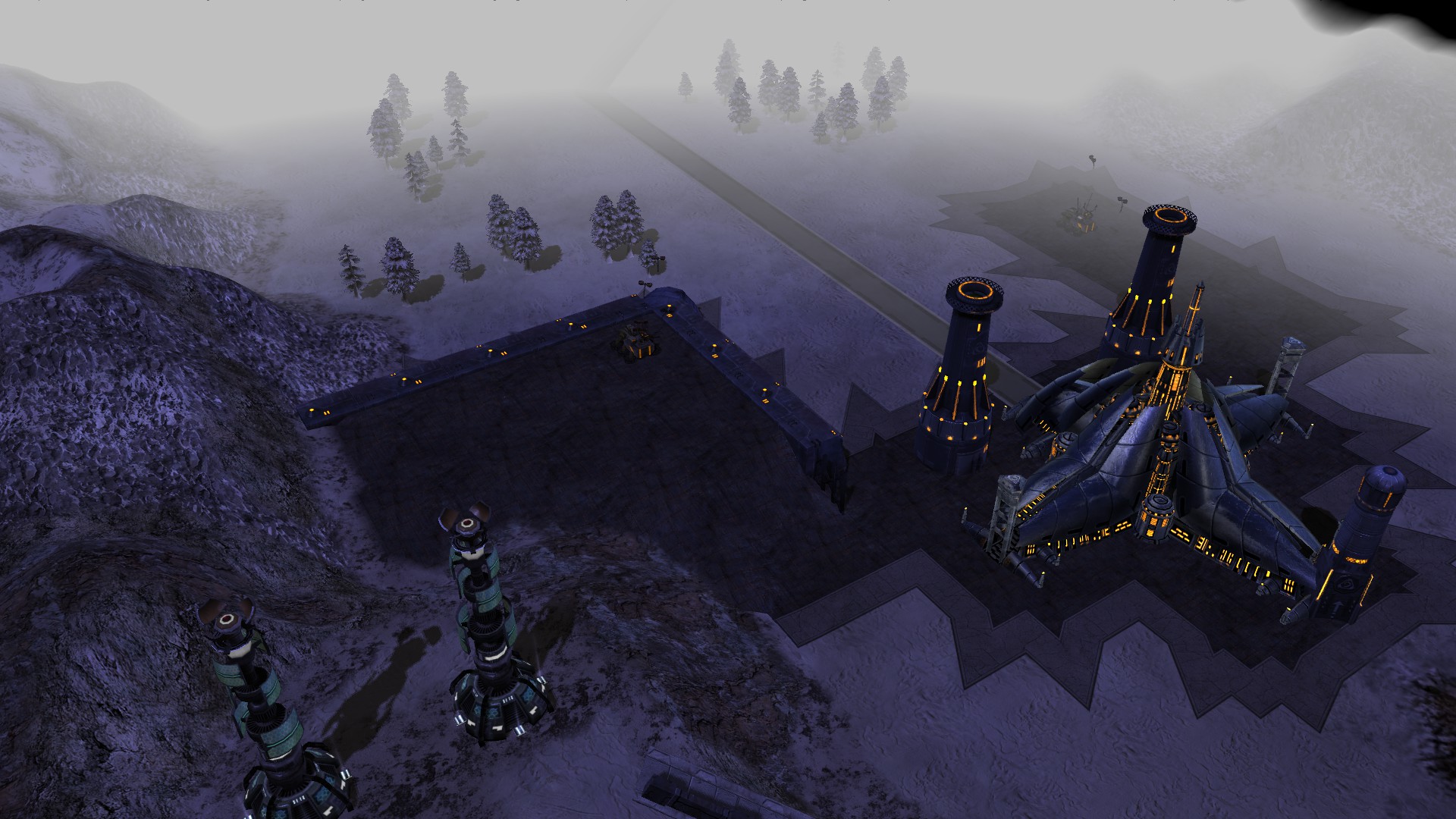 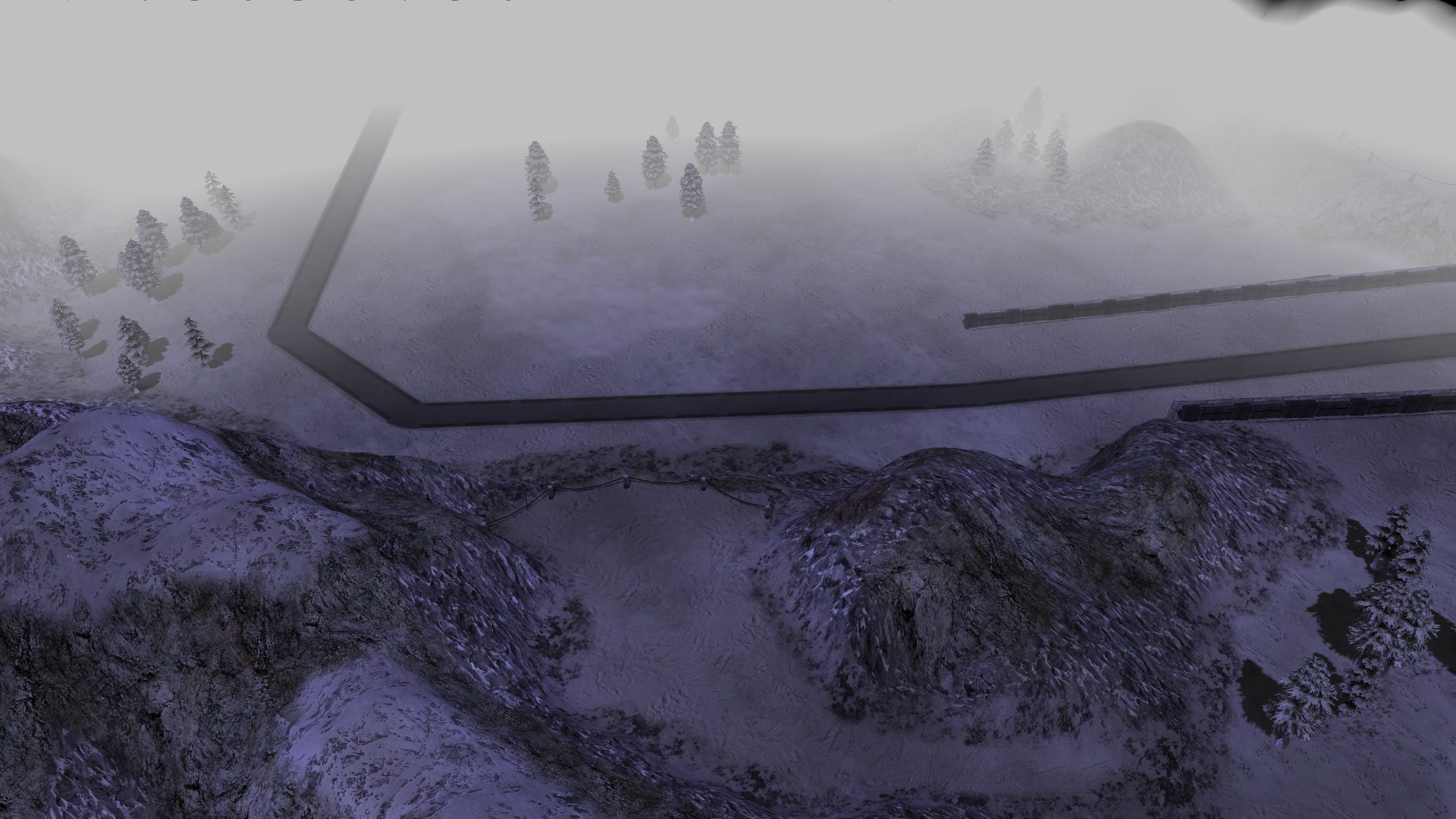 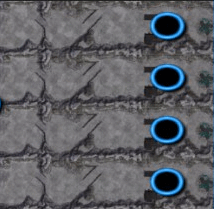 Credits: (These are also mentioned in the changelog)

Credits go to these people who helped me with this version: thank you guys so much for helping me :D (even if it wasn't a direct help, like having public assets to use)

- Stygs (Owner of TW Advanced mod: Moddb.com):
> Helping me with portraits and giving me feedback on them (esp. when I remade all the GDI ones with their original skins)
> Missile Squad foxhole digging animation as the model of the unit had to be properly edited
> Some aspects of the Zone Commando portrait
> (and Golan) for the Nod power plant laser fence model

- ErastusMercy/VinifERA (Developer of Twisted Insurrection: Moddb.com):
> (and Stygs) for the Sniper Team portrait
> Tiberium Fiends portrait (I thought they were made by Stygs, so I credited Stygs for it, but now i know that they were made by Erastus, so credit correction)

- theHostileNegotiator:
> Many KWB (Kane's Wrath Bandage) fixes, here is a link to his mod on moddb: Moddb.com
Also the code for KWB on GitHub: Github.com

- GenesisAria:
> From the C&C Mod Haven discord, used one of the audio files of the beefed up prism ray

Hope you guys enjoy the new version of the mod! Any feedback as well is appreciated, plus if there are any suggestions, let me hear you! :D

See you on the battlefields, Commanders!

Kane's Plan Revealed: Finale: S0 E8 Who We Used To Be

While Auditing our files I realized this was never released. Despite being referred to in the series Arc. This is the big reveal of what went down in...

Information regarding each of the Allied subfactions, talking about unique features and some lore.

Thank you so much for your support and for helping us reach the Top 100 mods for 2021 we're very grateful. Wishing you all an amazing holiday, please...

In this update we have Tiberium Gas, Chemical Missile to show off the first look at our new buildup animations starting with the Nod MCV deploying into...

Due to time contraints, there isnt much new here, just some more tools for CABAL.

??? 1a. Should GDI/Nod infantry move slowly and come in single units? If no, then: 1b. Is there need for Reckoner? 1c. Should GDI APC carry more than...

The long wait is over and the new version of Firestorm is here! Hope you guys enjoy! To unpack the mod, extract the contents of the campaign maps in C:\Users\(Username)\AppData\Roaming\Command...

Thanks to Skewer, I finally got around adding all of CABAL_REBORNs new voicelines to the game. So no more TW Nod EVA for CABAL. Hurray! THe rest of the...

We Need more new mods for this beloved game. with the times and what is going on in the world with the war too date we need more mods for this great game.

Hello everyone, I have a question about the original 3D models from C & C3: Tiberium Wars. Are there 3d models of buildings and soldiers in a separate file? To just convert them to the format I want (.obj)

Do it Lets make a 3D game of the original

3rd person is best for this game

Does anyone know how I can download this game?i can`t find it.is it Mod or Addon?there are Navy unit!!!!!it looks interesting.

I have tried the C & C3 tw Alternate Warfare mod and seen that the infantry squads are from different soldiers, how can I do that? I am trying to do the same in C&C 3 TW and I cannot get it to work well.

how to install maps in these game i cant my new maps in my game..

i hope this can help you, the way i got to play the maps was by installing the maps (the folder that they come in and everything inside), sending the folder and the stuff to %appdata% and then going to command & conquer 3 tiberium wars and then going to maps (if there's not a folder named maps, then make one) and then move the folders inside (some maps may crash, there's a 4GB fix that makes this happen less often, some maps may also not work without the mods that they are meant for), hope this helped :) i am on windows 10 and i have the steam version
If the maps don't have folders but just files like (map.data@structures or something like that, make a folder for them and then place it in maps, that should work), you can also download maps off of the addon section for command & conquer 3 tiberium wars by going to the map section, some maps may appear in the skirmish mode -> custom maps mode where your faction and units are already pre-chosen by the map maker) hope you have fun

they come with some mods

it was better then cnc 4 and thats for sure :P