Updates: Blaze of the Dragon Part 2

Continuation on the latest PLA vehicles and tanks update.

How come so soon? Well, the answer is easy. I'm still stuck in my room and too mentally depressed to do be a productive member of society at current time so I've only been doing the mod to find meaning in life if there's any left. If only irl is as easy as modding...

Anyway, depressing episode aside, place your bets down below whether you think they're going to fix Cyberpunk, WW3's going to happen, Earth's gonna get rekt by climate change or this mod's going to be released first. Looks like I'm in for the long haul this time. The winner wins a cake. No joke, dead serious.

As much as I want to release it at current state, I can't since it's missing whole lot of content so hold your horses. 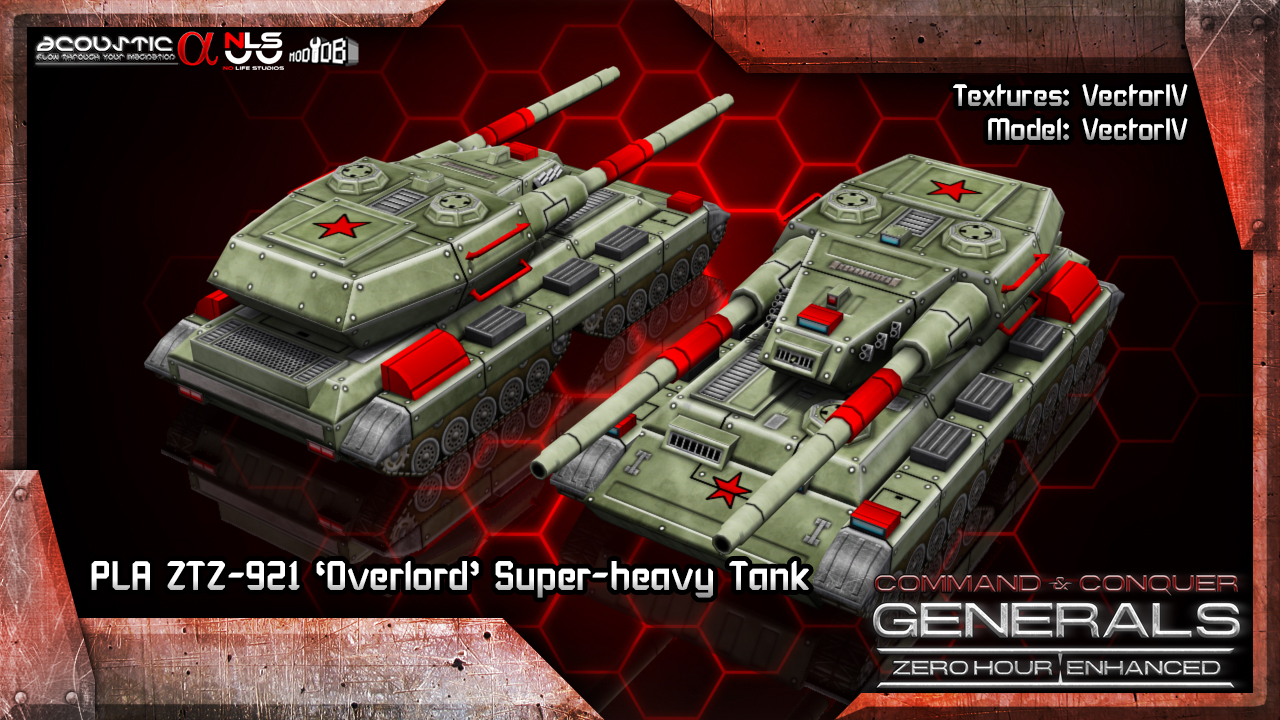 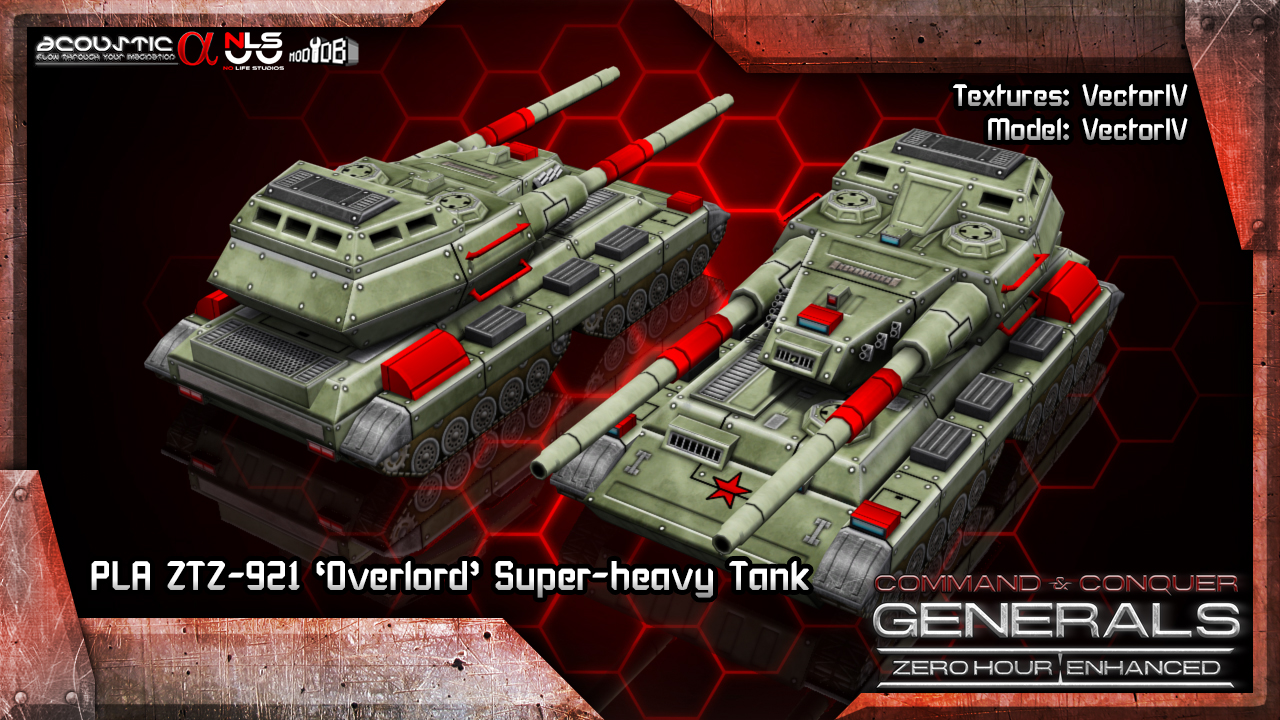 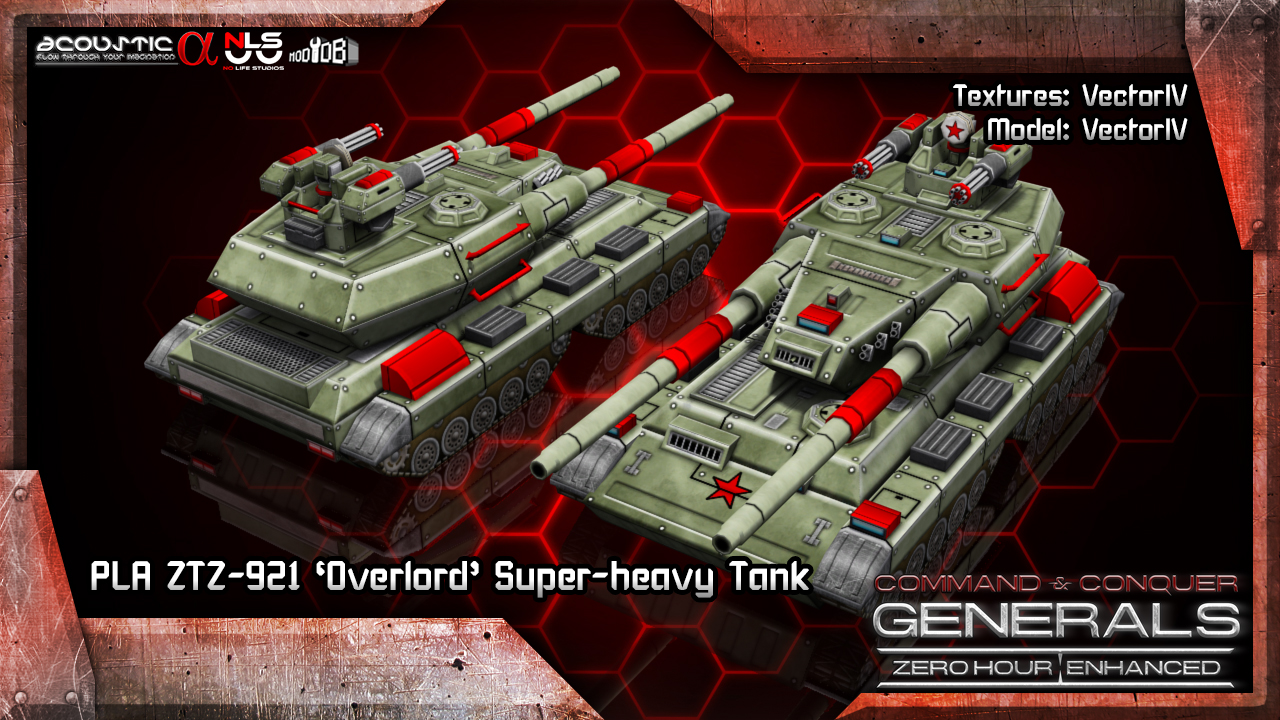 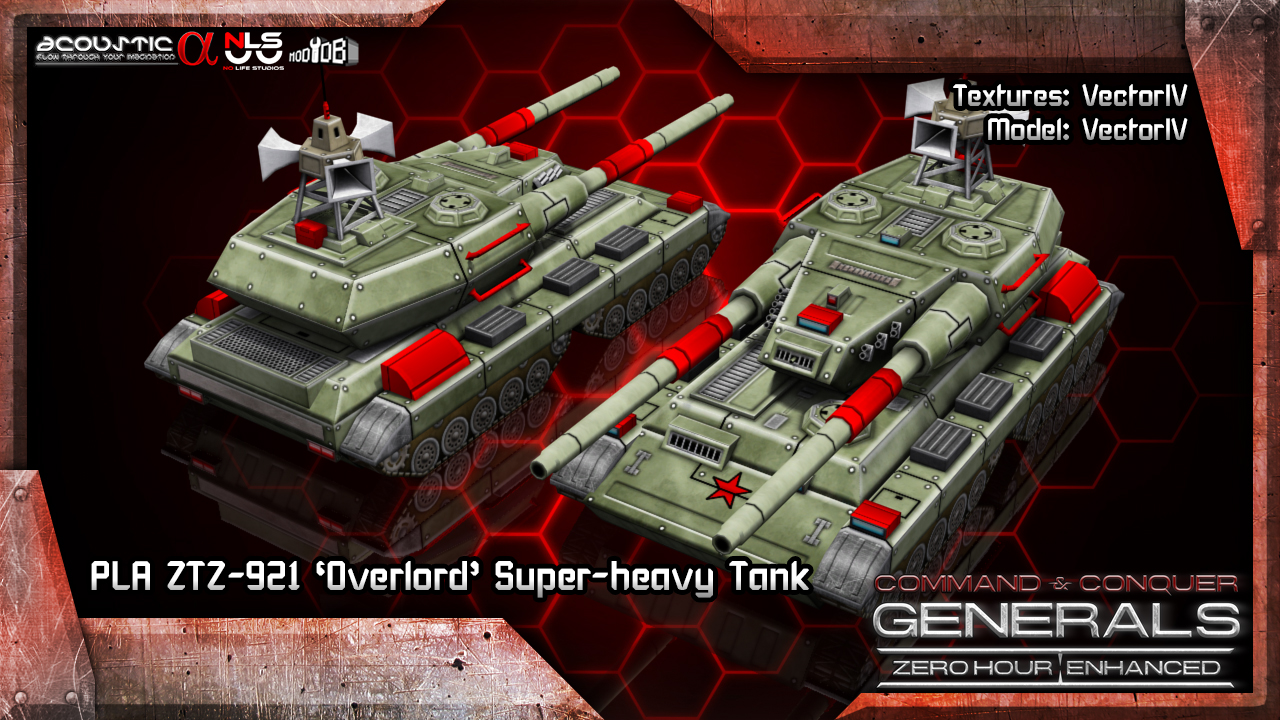 PLA ZTZ-921 'Overlord' Super-heavy Tank represents the great might of the PLAGF and the CCP's dominance over its sphere of influence. Forged with thick layers of composite armour, equivalent to over 9000mm of rolled homogeneous armour. While it's relatively slower than main battle tanks, its heavy armour compensate for its lack of maneuverability.

To counteract against enemy artillery, helicopter or low flying aircraft, the ZTZ-921 can be mounted with an optional short-range Twin Type-730 CIWS, reducing the enemy's capabilities to inflict damage to the tank.

To help China spreads its great leader's wisdom, optional Speaker Tower can be installed to enocourage nearby friendly troops to fight harder for their country.

Optional battle bunker also can be installed to slightly increase its hitpoint and provide heavy cover for infantry to fight from, acting as a mobile bunker station.

Doesn't come equipped with pre-installed smoke grenade dischargers but they can become available via a local upgrade. However, the ZTZ-921 can still use its engine as a smoke screen generator to create a small smoke screen surrounding it in case of emergency.

Due to its high cost and maintenance, only a relatively small number of ZTZ-921 can be deployed on the battlefield. 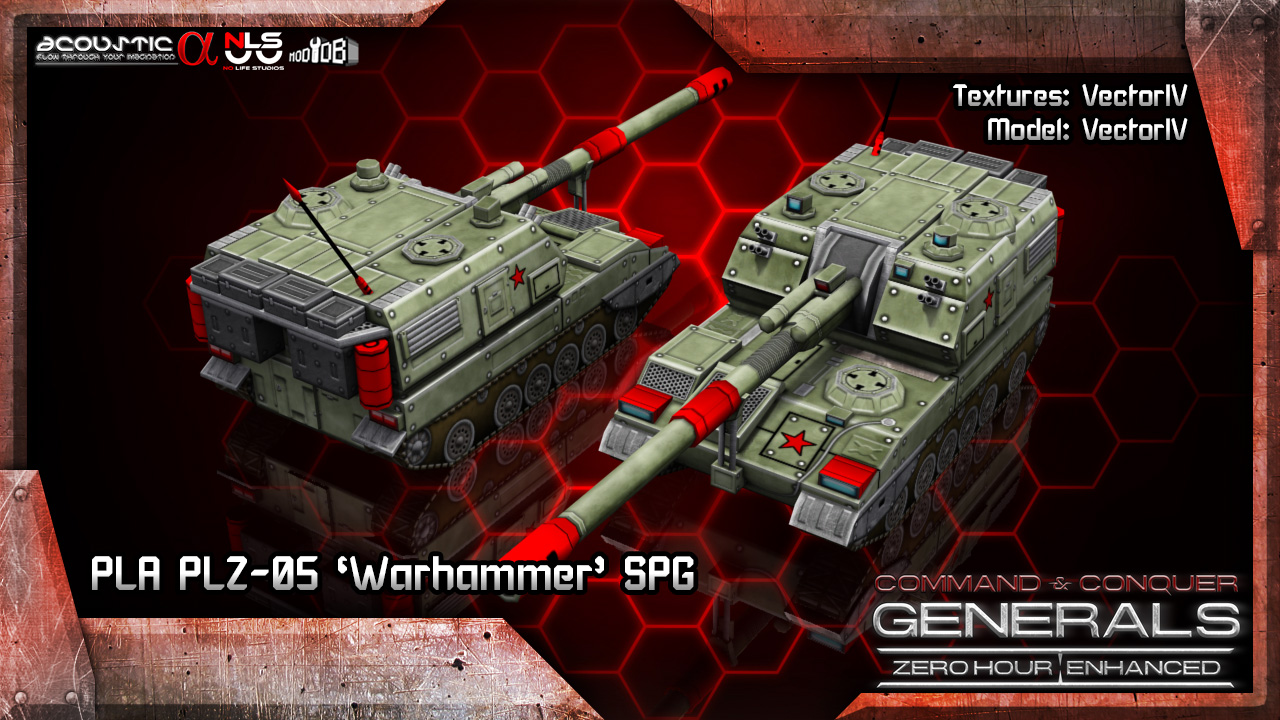 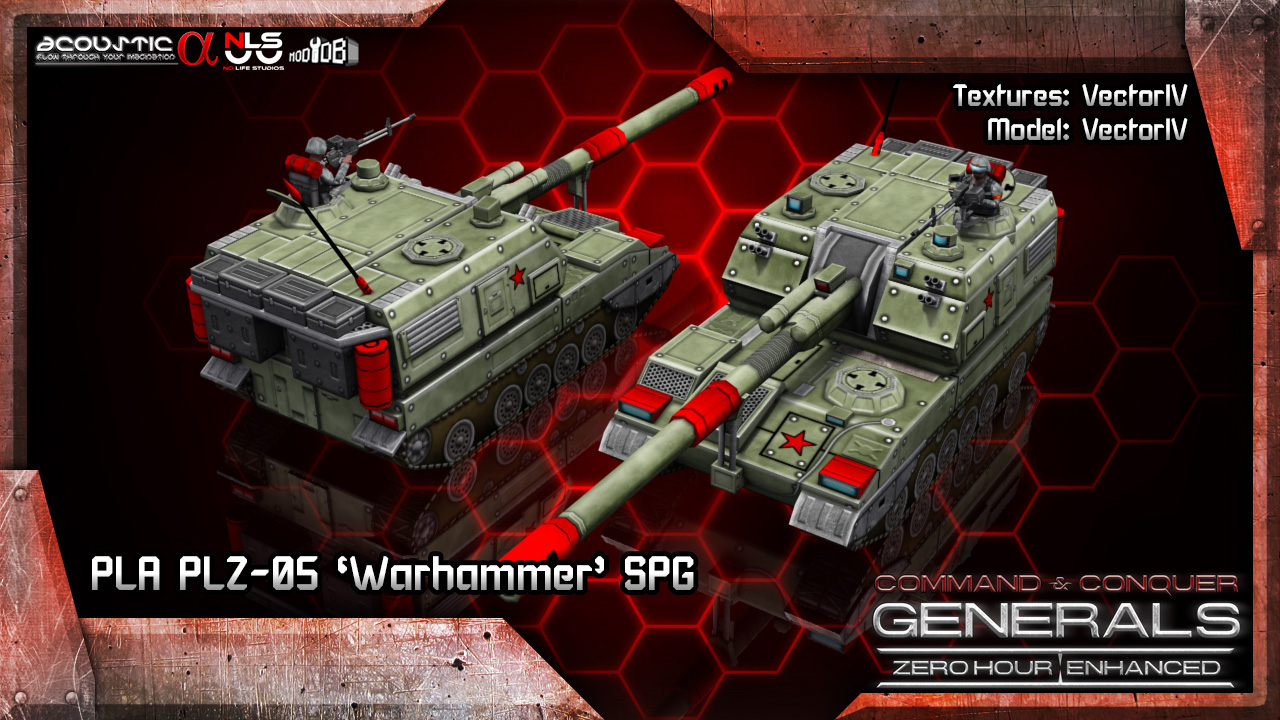 PLA PLZ-05 'Warhammer' Self-propelled Artillery is the PLAGF's solution for modern mobile artillery and the embodiment of the PLAGF's breakthrough tactics. It's more than capable of crushing the enemy's puny defenses and frontlines. While an overkill for infantry targets, vehicles and tanks are assured to be utterly destroyed if they ever meet the crosshair of the PLZ-05.

Mounting the PLZ-05 with an optional QJC-88 HMG gunner increases its effectiveness against enemy infantry, vehicle, attack helicopter and low-flying aircraft while also increasing the line of sight.

Doesn't come equipped with pre-installed smoke grenade dischargers but they can become available via a local upgrade. Despite that fact, PLZ-05 can still use its engine as a smoke screen generator to create a small smoke screen surrounding it in case of emergency.

What does this mean for the Inferno Cannon? It's still planned to be included though backseated as a special flamethrower artillery instead. You'll see it when it's done. Eventually. 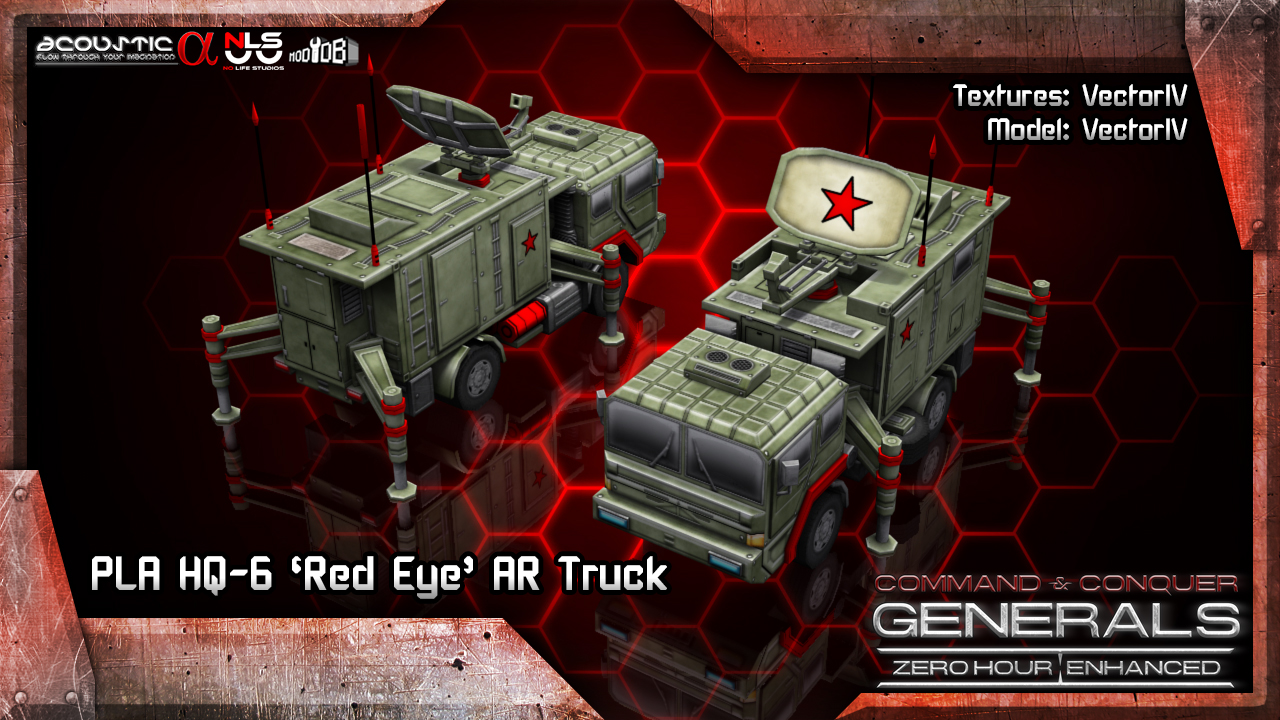 PLA HQ-6 'Red Eye' Acquisition Radar Truck is the PLAGF's eyes on the ground, capable of mobile wide area surveillance and stealth detection day or night and in all weather conditions. Lightly protected, its main role is to serve as a long-range reconnaissance unit. When the radar is deployed, the HQ-6 becomes immobile until the radar is undeployed making it extremely vulnerable to aircraft, fast vehicle or sneak attacks.

A squad of Field Engineers is stationed on the HQ-6, offering mobile technical support and small degree of protection against enemy infantry.

Anyway, that's it. I wish I had more jokes but kinda depressed right now ngl lol.

In the mean time, feel free to donate to NLS for now, join discord or click on doge for some reason idk:

Updates: Blaze of the Dragon Part 1

This is an update about the new PLA vehicles and tanks.

Reupload of the final full non-installer release of the mod since A-Vladimir1994's version is bad for newbie patching.

A patch for beta 0.9.1 which consists of numerous of fixes and some changes. View the changelog and news update for more information. Changelog: h t t...

This is a selection of tracks from the Enhanced OST, but modified to work with vanilla Zero Hour (and most other mods). Just copy the "Audio" folder (make...

This is the final full release of the mod. I hope nothing goes wrong here or else it's a re-upload or instant day one patch. Edited: Need version 0.9.2...

This is obviously an original soundtrack for C&C Generals Zero Hour Enhanced. These are composed by Charlie Lockwood.

This is the second SDK release for a modder. If you're not a modder or don't know anything about modding, don't ask how to use this, don't even think...

I wanted to try this just for the sound design, but my old computer runs the visuals too! This game will live on for 10 more years

Can you change the friendly fire to an optional installation option in the upcoming update? This feature is really interesting, but I hate this system, especially when the ZH unit does not have a formation option.

hope all these updates to become available soon, as last upload was waaay too far in past.

I wanted to check this out for a few years now, but I figured my 11 year old computer wouldn't play it. Today, I found out it works! 7 Hard AIs didn't work, but the game installed and started right up!

The AI sits around and does nothing?

The maps that start with ENH in the title have the AI set up to work with the Skirmish scripts.

Hello! masterrr, have stimated date for the next update for download the mod? i cant play really the game crash at 2 or three minuts you need repair this please for the peopleeeee , regards and wait your answer

An graphically enhanced mod just for the people who love realism, so i give 100 out of 10 XD