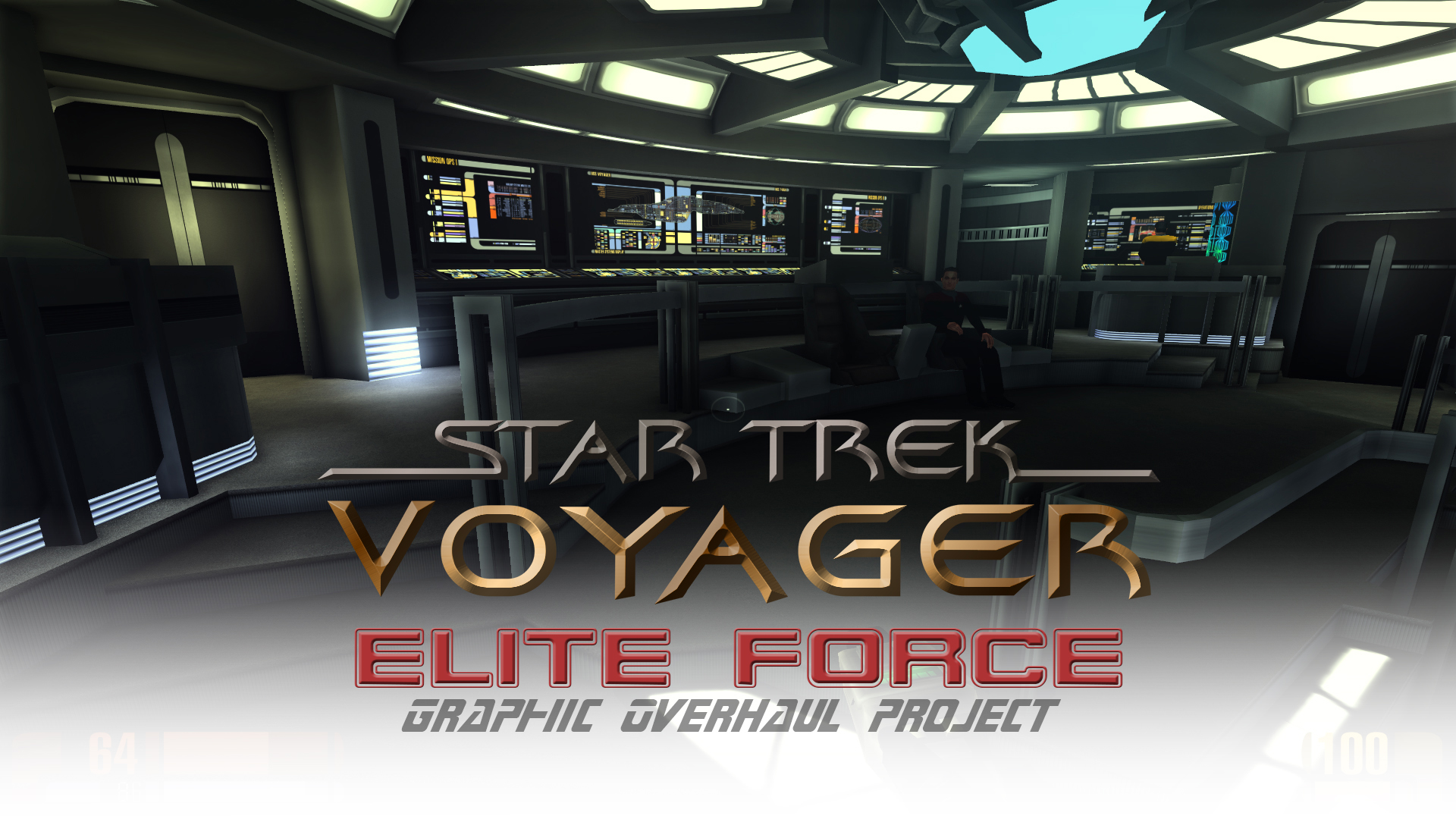 Unbelievable 15 years ago since Star Trek Voyager- Elite Force was released. This mod is for everyone, who loves the golden age of Star Trek games released by Activision. Elite Force was a nice shooter and for sure one of the best Trek games ever. If you want to play this game today you will might be disappointed about the graphics, which appeared so nice one and a half decade ago. So a couple of years ago I started to collect everything that is useful, to create a graphic overhaul for that wonderful piece of software by Raven. Although most of the textures where created by myself with Photoshop, there are also a lot of sources used, like files from the good old, but gone forever this summer, filefront. I also use a new OpenGL renderer by, which adds a lot of new render technics and light effects. Due to the fact, that this is a pseudo driver it just simulates a lot of effects, but, even this is not working always perfectly, it’s an astonishing improvement compared to the original graphical quality. By the way, this renderer also works for the RPGX editions. 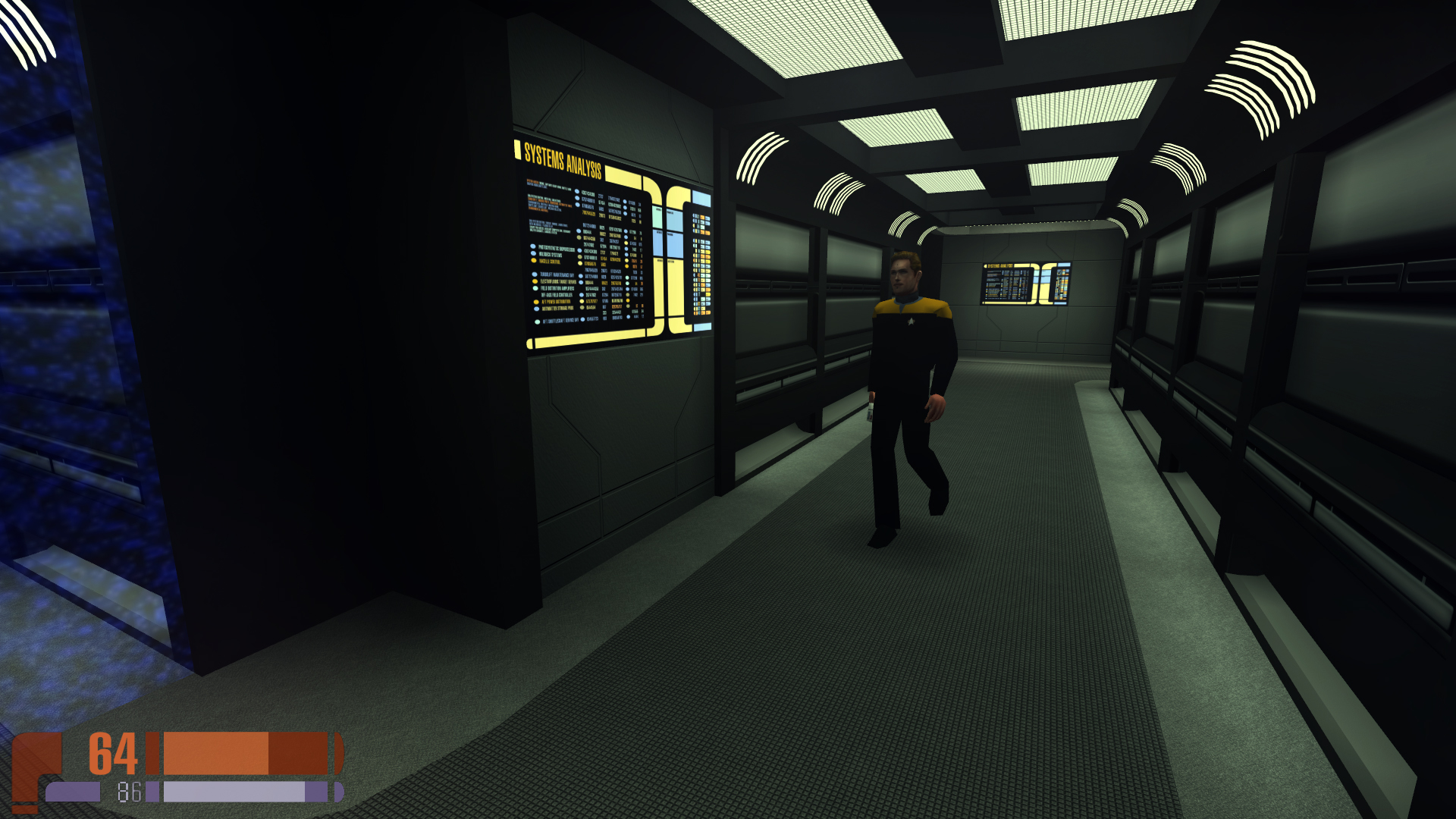 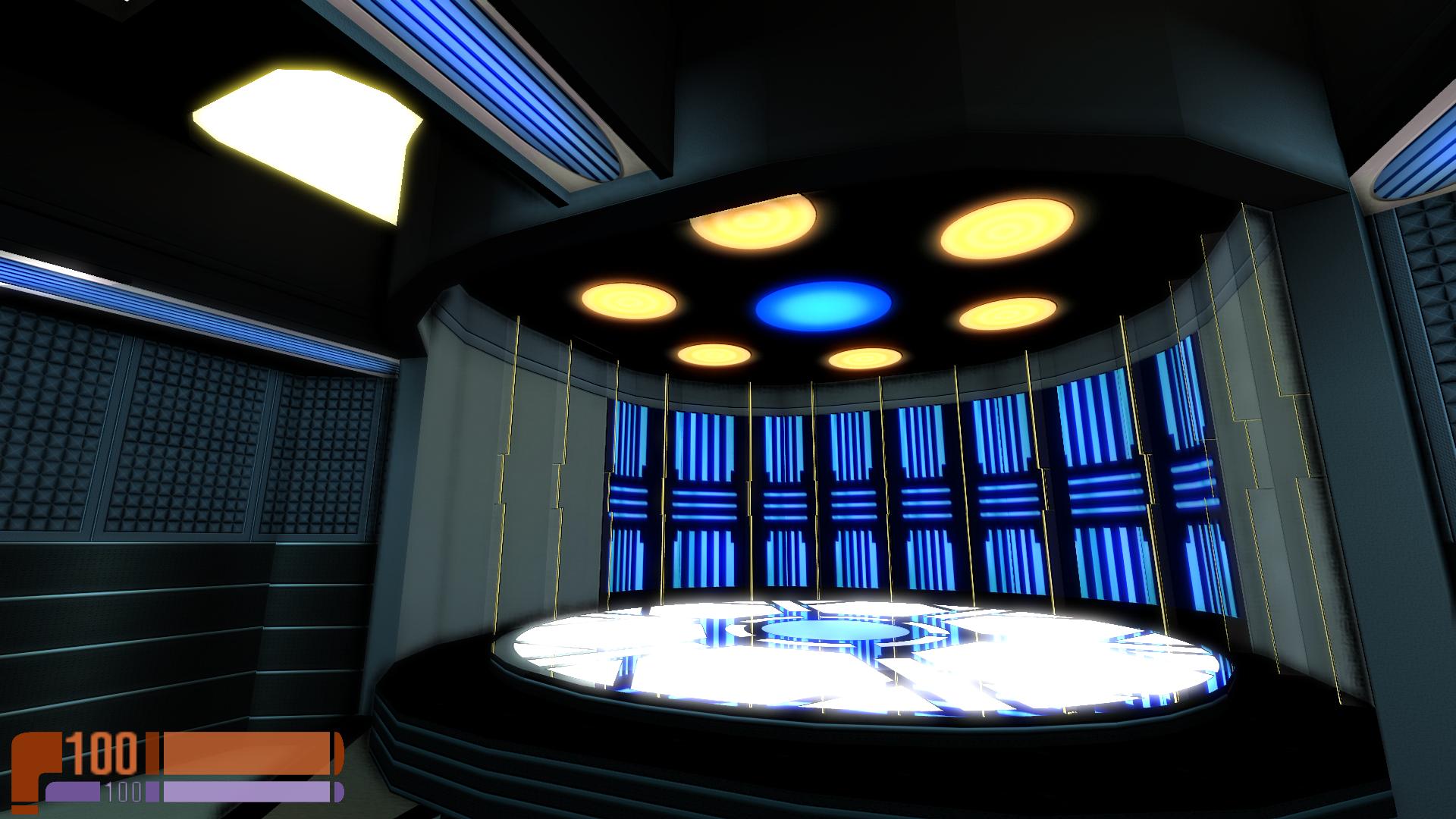 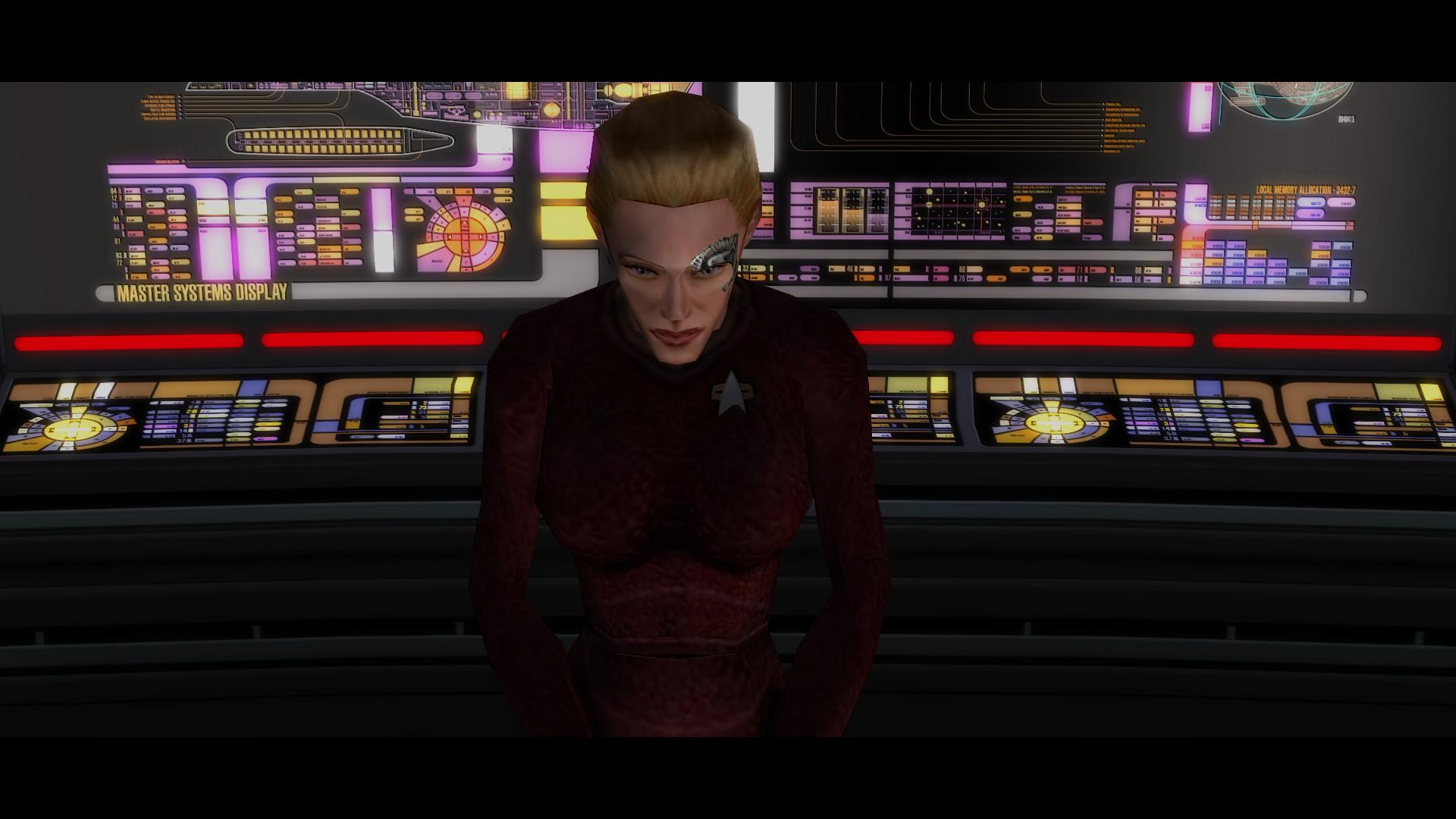 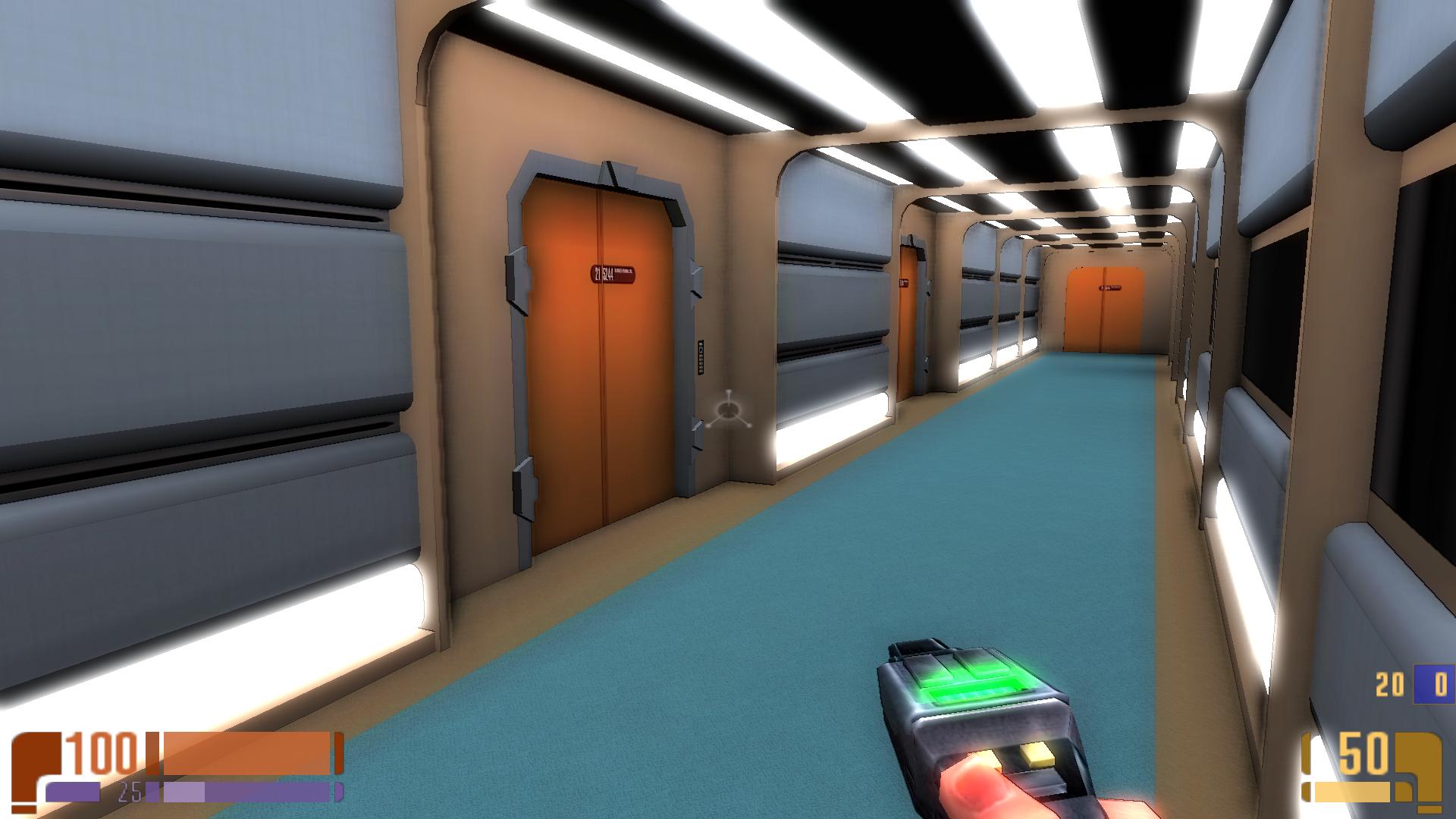 Of course I am not able to recreate every texture, what means that basically ”only” the whole Voyager, the Tutorial, some Borg and some Holomatch textures, HUD, GUI, Levelshots etc. will be replaced in the final release. And I also reworked the famous Serenity Galaxy Class map textures.

A release is planned this year. At the moment I am fixing some bugs, but I hope I can provide a beta for some testers soon.

Sorry for my bad English… I am sure grammar is horrible :D

Thanks for voting and helping Elite Force: Graphic Overhaul Project on it's quest to become the 2021 Mod of the Year. You are now in with a chance to score some free games from our #modlove collection. Help this mod secure more votes by embedding the widget (or link) we have included below on your favorite sites. 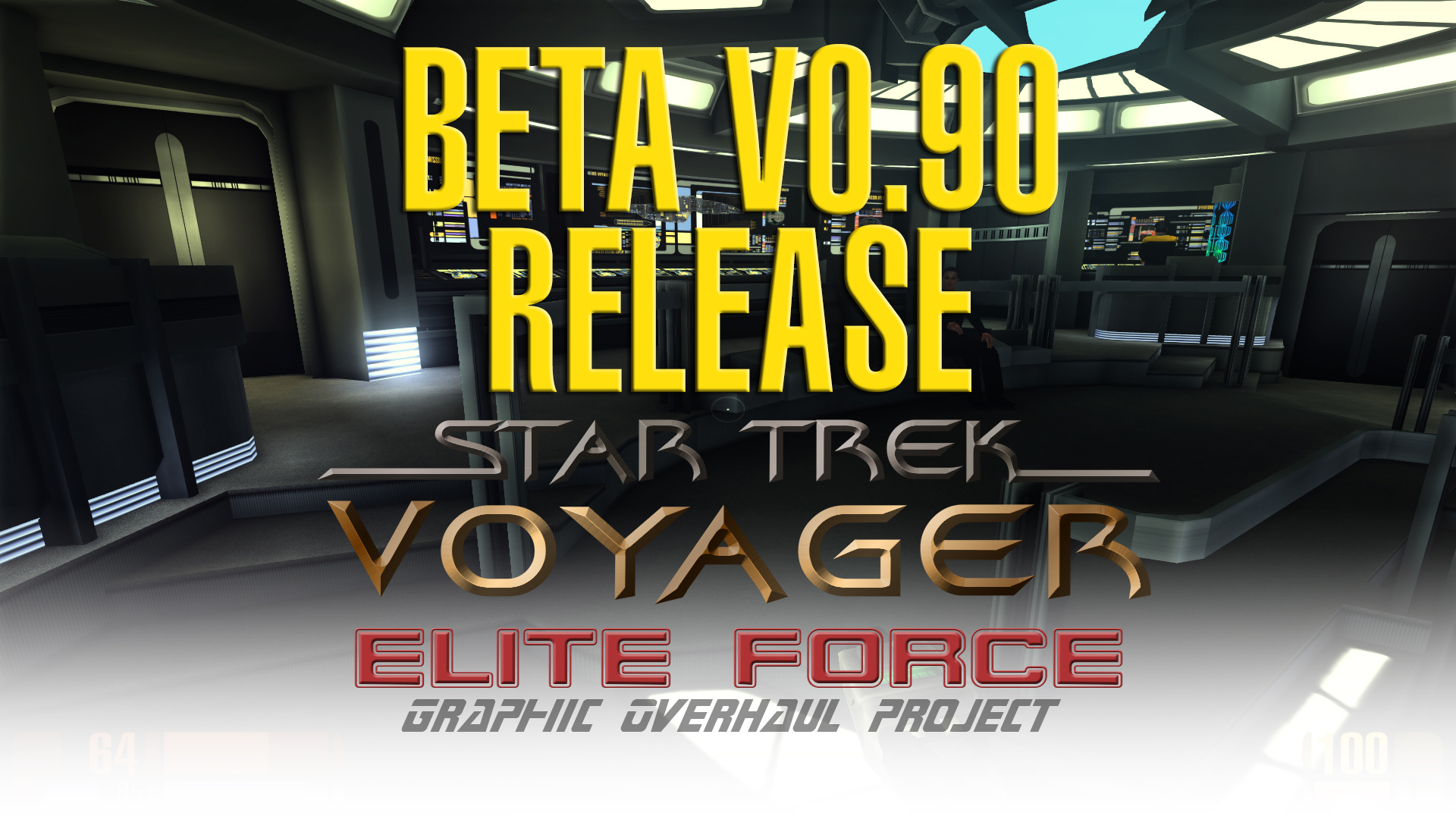 These are some release notes for the first public release version of the Star Trek Voyager - Elite Force: Graphic Overhaul Project. This is not a final/complete version and I cannot guarantee that there will ever be one.

When I tested the package last time I had problems to get the mod working with the original game alone, without the Expansion Pack. My suggestion: if you do not have the Expansion Pack…get it instantly from somewhere. That’s an order redhirt!

The user Kana136 was so kind to give me some examples of his work to improve the overall game experience with additional shadow casts from light sources and more accurate Voyager maps. I included his work for the Borg maps from the first single player mission and you can see a remapped version of the Holodeck map used for the first in game graphic cut scene after the Borg mission failed.

We will see what Kana will contribute in future. Let’s hope he has enough time to do some more fantastic improvements.

Please make sure to follow the instructions from the forum section and report issues:

Known bugs (probably to be continued):

I included a credit list, since a lot of work and features came from different modders from content that was made many, many years ago. I also want to thank XearoX for his openGl renderer I used at the beginning. I switched to the ReShade framework later but I was inspired to work on this Mod by the extended features he made possible.

I hope you will enjoy the current status as much as I do and I apology for my humble English.

Statement to the canceled release today

Unfortunately I have to cancel the planned release today due to some serious issues.

Due to real life circumstances this project will be a little bit slow down. But no worries I have to announce a massive update. A lot of things have changed...

These are some release notes for the first public release version of the Star Trek Voyager - Elite Force: Graphic Overhaul Project.

UPDATE: I tested it with the GOG version and it still works perfect @2560x1440. Just copy/paste the files and set your resolution in the autoexec.cfg in the BaseEF folder. You need to use one of two .exe provided by the mod in order to apply Reshade effects.

Dear all, seems interest raised due to the recent GOG re-release of the game. First off all thank you and no, this is not under active development. My main goal was always – as stated – to rework the Voyager sets to enjoy these. That goal was achieved. I also reworked some Borg, Klingon and Holomatch textures but it is not a full game overhaul.

Haven’t tested my mod with that GOG version but I test it every now and then on my latest system and the mod still works perfectly. Most problems people reporting are always the same and go back to that installation steps from the readme where not followed and people are not aware that they have to adjust their resolution settings in the autoexec.cfg file in the BaseEF folder.

Mod installation and configuration
1. Perform a clean installation of Star Trek Voyager Elite Force.
2. Install the Expansion Pack.
3. Make a backup of your installation just in case (this step is not necessarily required).
4. Launch the un-modded Single Player and Holomatch game modes (always as administrator or setting will not be saved) for the first time and start a game. After that just quit Elite Force (this step is important, since the moddded configuration files could otherwise be overwritten later)
5. Download the ef_gop_vx.xx file and extract with WinRAR to a random folder.
6. Copy the extracted files to your main directory of Star Trek Voyager Elite Force (where the game.exe is located)
7. Go into the BaseEF Folder and open with right click the autoexec.cfg with your text editor:

• Choose your language. It is set to GERMAN. If you don’t speak german, don’t mind…nobody is perfect. Enter ENGLISH instead

Save the setting. My game runs on native 2560 x1440 but I got reports that high resolutions are not always working and the OpenGL subsystem gives an error message on start. If that’s the case try a lower resolution. Make sure you set not higher resolution of your actual display settings.

I hope this will help most people. Also check the old forum. A lot of common issues were mentioned there. One of them is that the game will work less good on integrated GPUs and Radeon Cards.

Hi, is there a way to disable chromatic aberration?

Hi! Yes, go to the game's main director and open the Mediator.exe to change ReShade settings . You can activate, deactivate and tweak whatever you want. Or you just delete this ReShade version since it's very old and unstable and install newest release from their website. This should work fine also and you can setup what you want also.

thanks for making and sharing this, things go look a bit better, just not sure of the re-shade, I'm guessing it's working, the add buton did nothing but i put in the stvoy.exe in the add field add and selected the re-shade folder for the preset. Will give it another shot.

You have to use one of the two exe file tham come with the mod in order to get the pre-installed reshade to work. Or you delete this and try the latest Reshade version. People told me it works.

If you installed the mod and the adjusted config file all Voyager levels and the Tour Mode will look dramatically better (like on my screenshots) since I replaced nearly every texture with a new high resolution one. This was the main goal of my mod. I also reworked some borg, klingon and holomatch textures but not the whole game since it would be too much work for one person.

The GOG Version stutters as hell. Can I tweak something to fix that? Anyway, great mod! Beste Grüße

Hallo! What do you mean with "shutters as hell"? You can also explain it in German ;) Haven't tested the GOG version but I guess since they usually adjust parameters in exe and ini files this could cause some conflicts. Another reason could be the old ReShade version this mod comes with. Try to delete every ReShade file from the game directory and install newest release. From what I have heard this should work fine.