Tommy is a down-on-his-luck garage mechanic, stuck in the middle on who-knows-where on some forgotten reservation, where Native Americans are tucked away out of sight, out of mind.

And then the unthinkable happens! Earth becomes prey to the galaxy's largest predator, a space bound Texas-sized alien that's looking to satiate its hunger with the organic goodness that most populates Earth: Us. And the first course is a certain forgotten reservation.

Tommy and his girlfriend have become prey, his grandfather killed, and hundreds of his tribal nation have been abducted through space-warping portals. Freeing himself, all Tommy cares about is saving Jenny. But the spirit of his grandfather beckons him to embrace his heritage, accept the ancient teachings, and prepare to battle the menace that threatens to destroy all the planet's
life. It's a choice between love and responsibility. It's a choice that cannot be made easily.

* Built on an enhanced Doom 3 engine, the most impressive 3D engine used in a released game.
* Portal technology adds a new dimension to gameplay, allowing enemies to appear out of thin air and create new and completely original puzzles and gameplay styles.
* Several never-before-seen gameplay elements such as Spirit Walking, Wall Walking, and Deathwalk.
* Highly organic, living environment that itself can attack Tommy.
* Tommy has a sidekick, a spiritual hawk that can help him fight enemies and decipher the alien language of the living ship.
* Multiplayer game support that takes advantage of the unique gameplay styles in Prey.

Ladies and gentlemen, here's the first screenshot from episode 2.

First, I'm sorry if I disappoint you, but that does not mean the second episode is about to come out. Hey, after all, I do all of the mapping, scripting and texturing by myself, cut me some slack ;-)

It's meant, however, to give you a sneak peek of the general setting of episode 2. Before you say it has nothing to do with episode 1, think about its ending. Every episode will start right where the previous left off: if you get a glimpse of an environment at the end of an episode, you will be able to explore it thoroughly in the next. Generally, every episode will be set in a different environment: I want to give to each of them an unmistakable look. 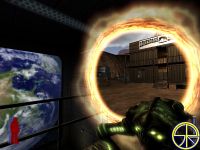 I will surely release more screenshots before releasing episode 2, but not any time soon. And now, if you excuse me, I have some mapping to do. :-D

For those of you wanting a little more action out of Human Head Studio’s and 3D Realms gravity flipping game 'Prey', we have a small selection of reviews...

Prey, once thought to be lost in the endless chasm of vapourware alongside Duke Nukem Forever, is finally but a few weeks away from release. We take a...

Prey controller support (for the 2006 game)

Try to play Prey (2006) with a gamepad: here's a reWASD config for this game, and you can use it with any of the supported controllers!

impacts and Ichor for Prey2006

This is the full package, including Sikkmod lite 1.2 for Prey.

Added to this download, is the telekinesis ability and the Pyrokenisis. Rightful credit for telekinesis, goes to Dafama2k7's gravity gun.

The default wrench is replaced with "pyrokinesis."

This little tool, made for modders, is an automatic file extraction software for games based on the IdTech4 engine (also known as Trinity) developed and...

Prey is one of the best games I've ever played.

update:
approved that Prey is definitly NOT using id-tech 5.
This means it can be id-tech 6.

John Carmack said the technology does not exist yet for Id Tech 6. They are using a heavy modified version of Id Tech 4. Human Head Studios said this thereselves.

More likely though if its coming in 2012 its not going to be idtech 6, but a modified idtech4.
My guess would be brinks updated version of idtech4, or maybe even just an updated version of the original prey's idtech4, adding support for megatextures and other stuff added to the engine post prey 1...