A spin-off of Jedi Knight II: Jedi Outcast, Jedi Academy allows players to create their own Jedi, train in the Academy under the tutelage of Luke Skywalker and Kyle Katarn and ultimately choose to follow the path of the Light Side or the Dark Side of the Force. The game is powered by the same version of the Quake III engine used in its predecessor, Jedi Outcast, containing modifications to the Quake code to give a third-person view and new lightsaber effects (Jedi Knight II had these 3rd person effects as well). Players have the ability to construct their own lightsaber by choosing the hilt style and blade color. After completing certain objectives, new saber styles become available.

July has been an interesting month (to say the least). So let's get started!

Back when Galactic Legacy was initially released, we removed the option to play the Father vs. Son mission, expecting ourselves to deliver a full remake of the mission at some point in the future. It has been almost 2 years at this point with no sign of the remake whatsoever (despite us announcing it multiple times).

Father vs. Son will be returning to Galactic Legacy in the next update, released exactly as it was back in Knights of the Force; on the same map, with the same questionable game design choices as before. As of typing this, Luke's and Palpatine's POVs have been fixed up, with Vader currently pending, but should be fixed very soon.

This was done in order to hopefully provide some missing content intended for GL that we have so far failed to deliver on, and hopefully will hold you over once we release the actual remake at a later time. 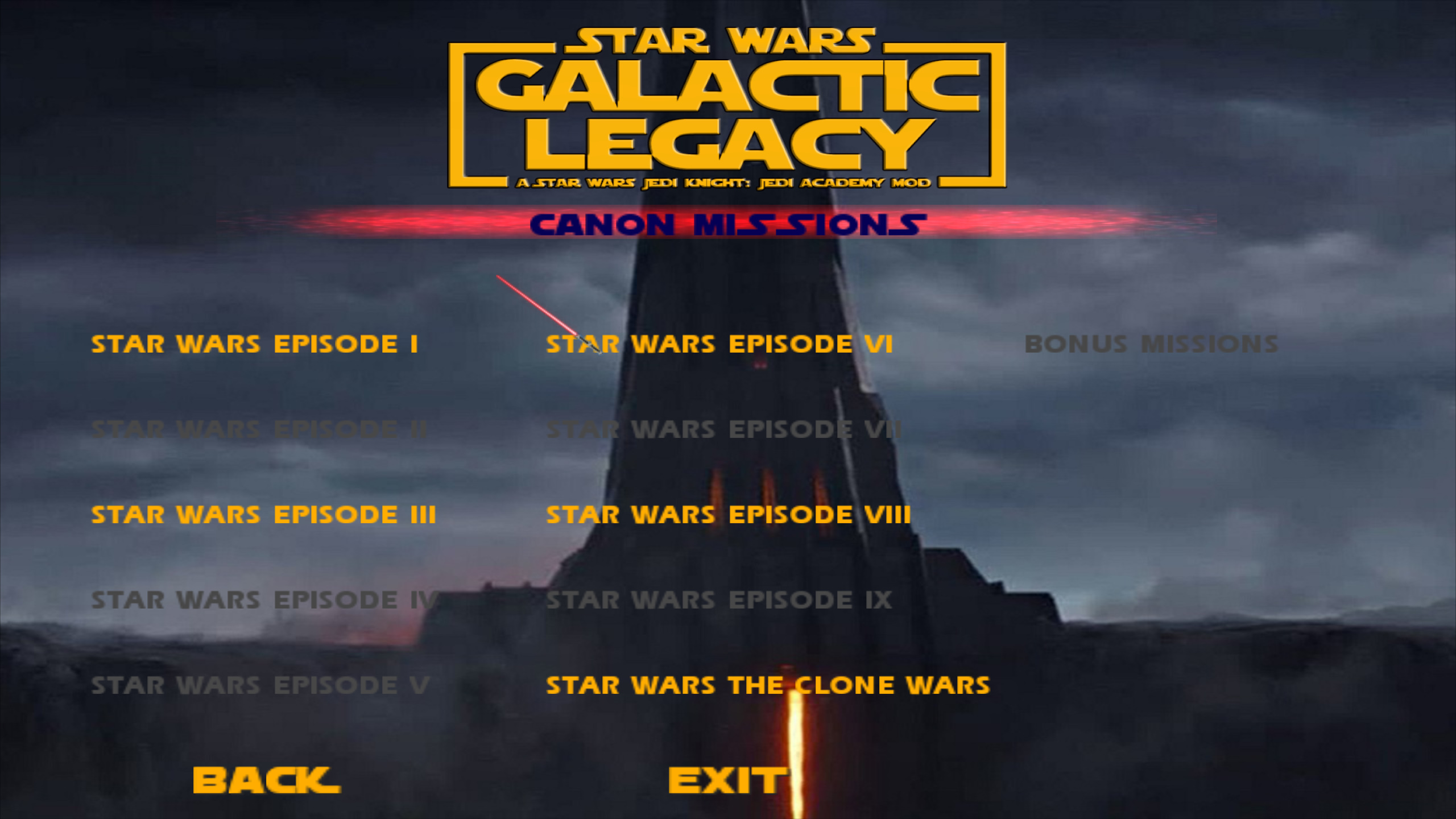 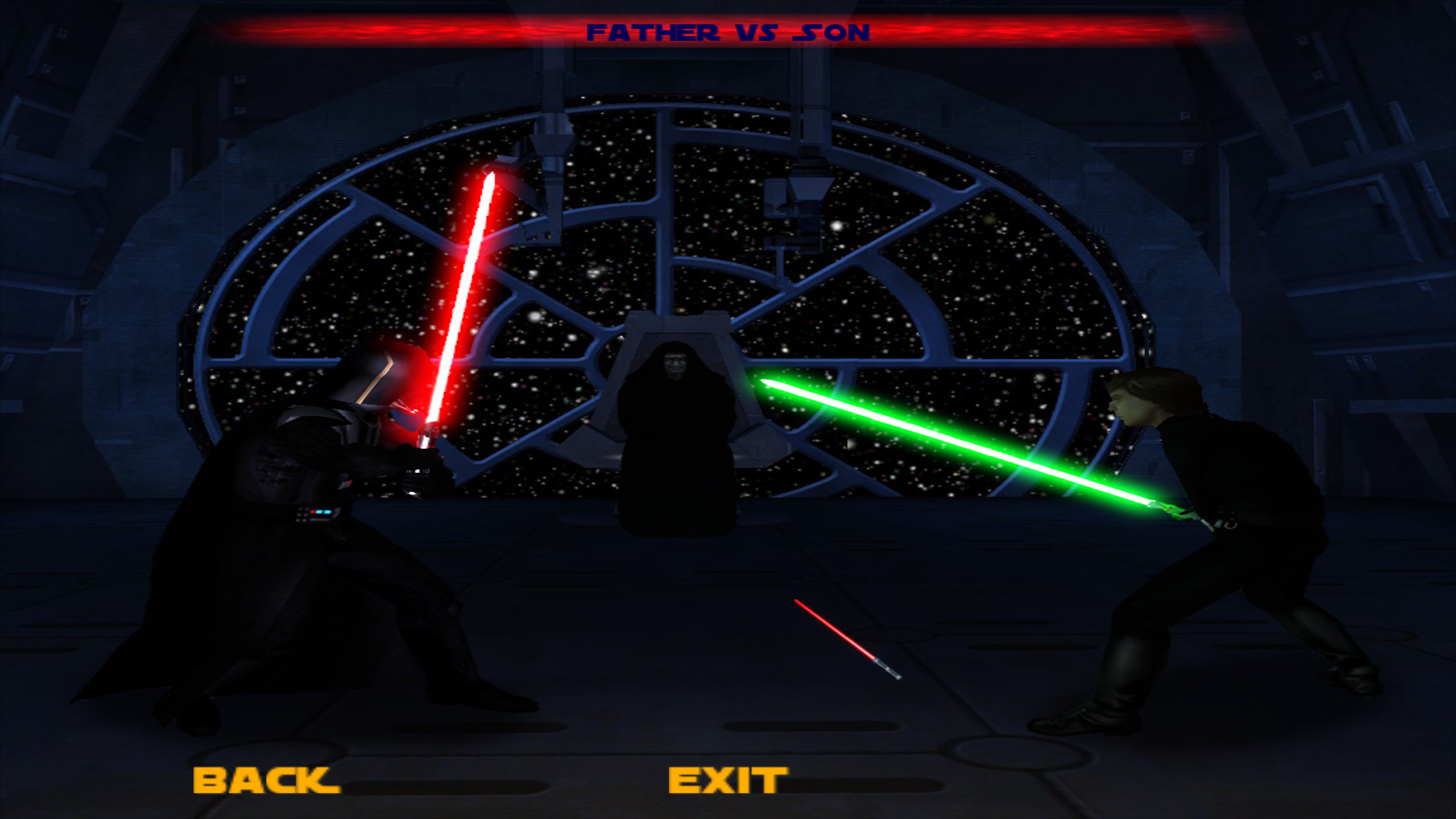 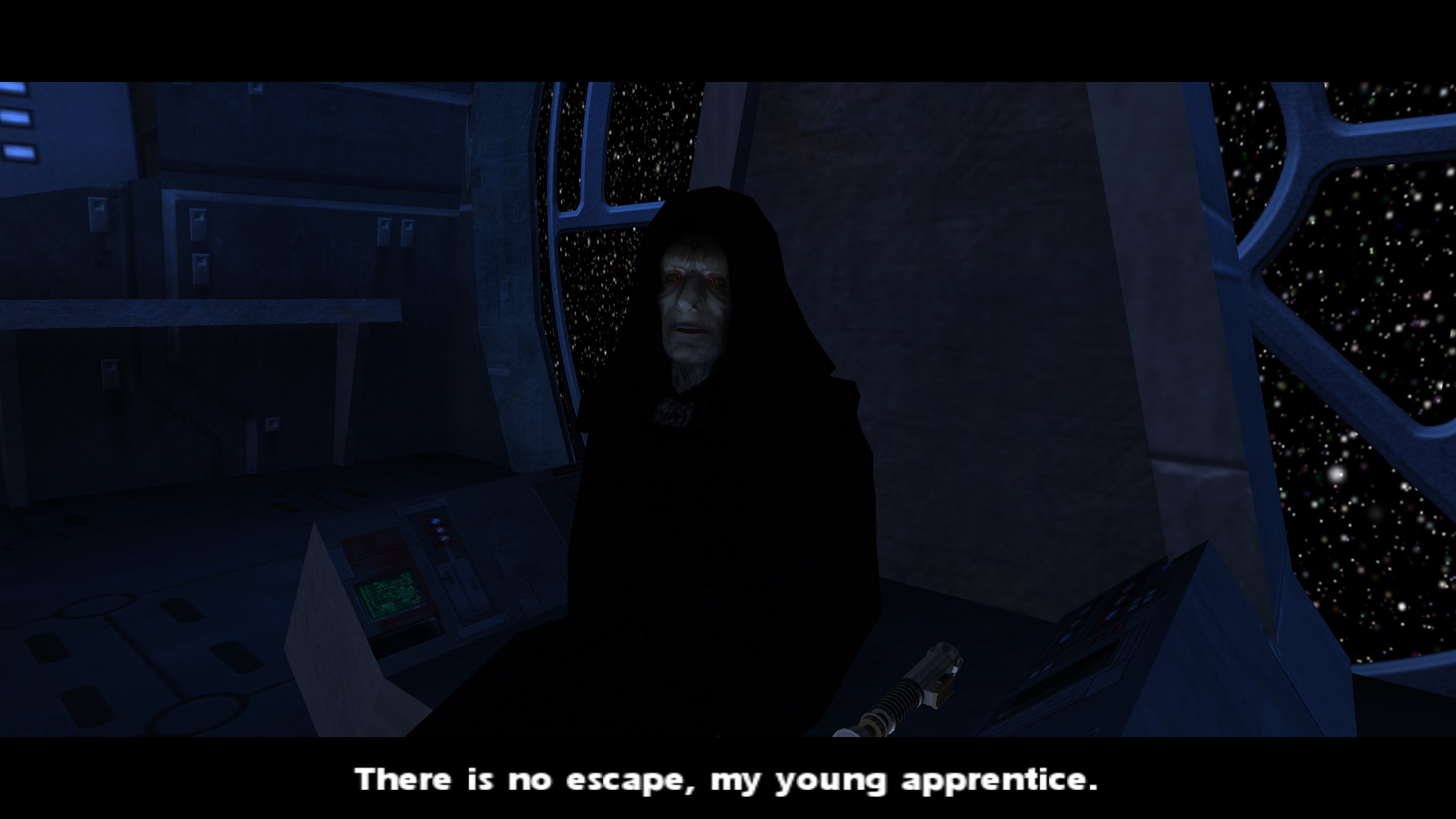 We've continued our slew of adding new characters, with a number of fixes to the Imperial Military to complement them. Below is the list of new characters:

During the month of July, the amazing and talented Plasma has added and updated the lightsabers in his pack. The following sabers have been added to the mod (and applied to their respective characters as necessary): 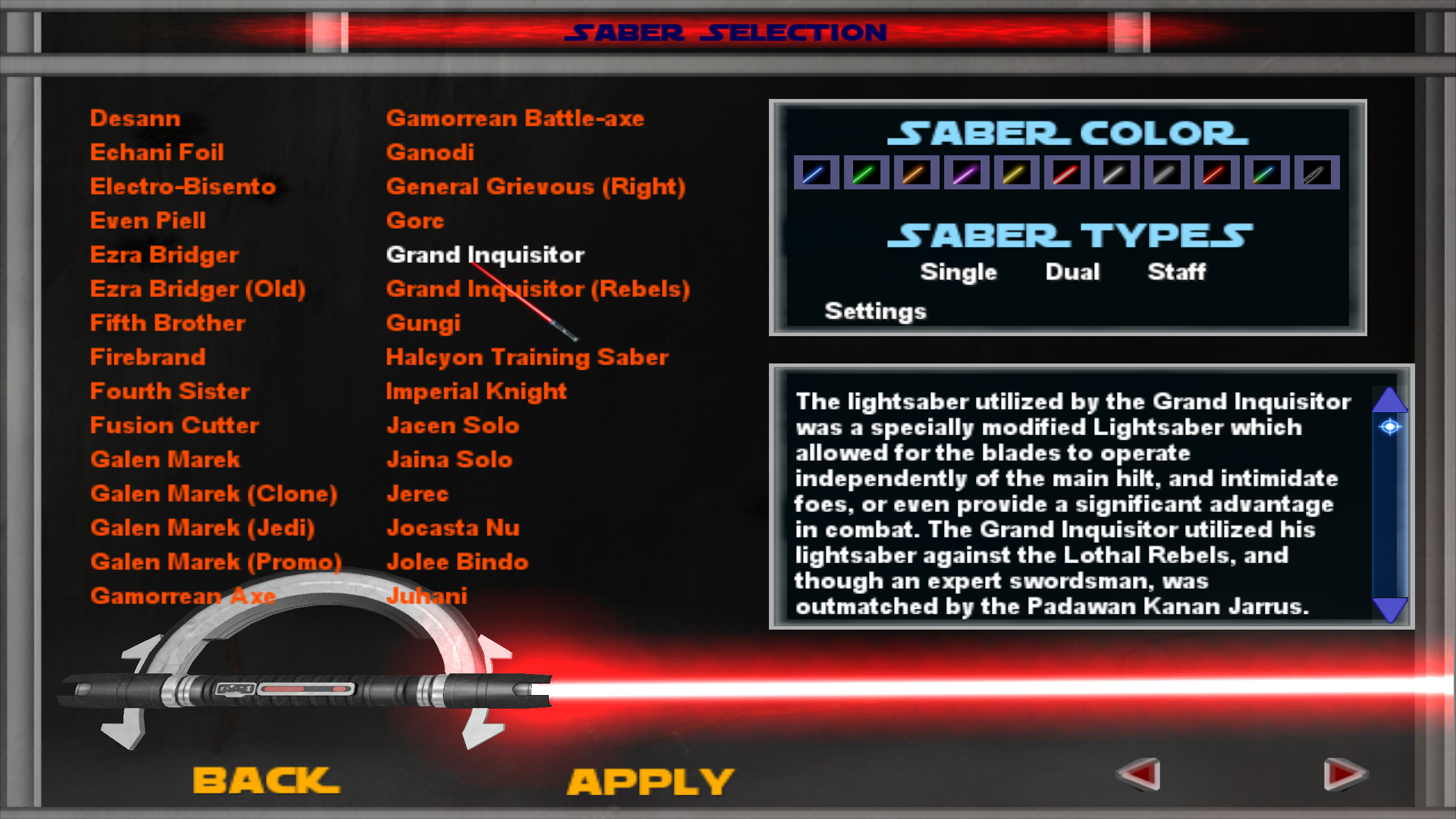 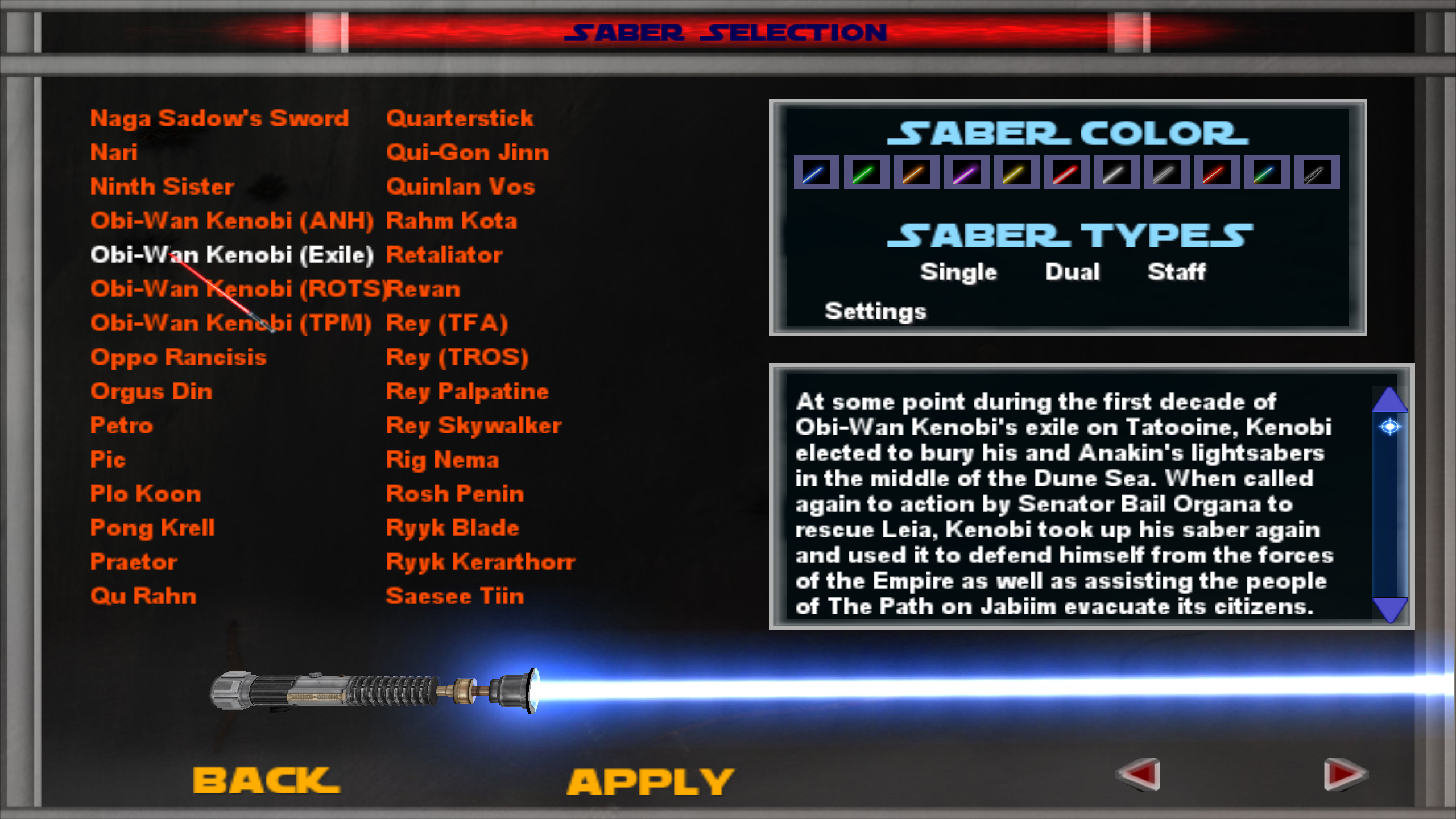 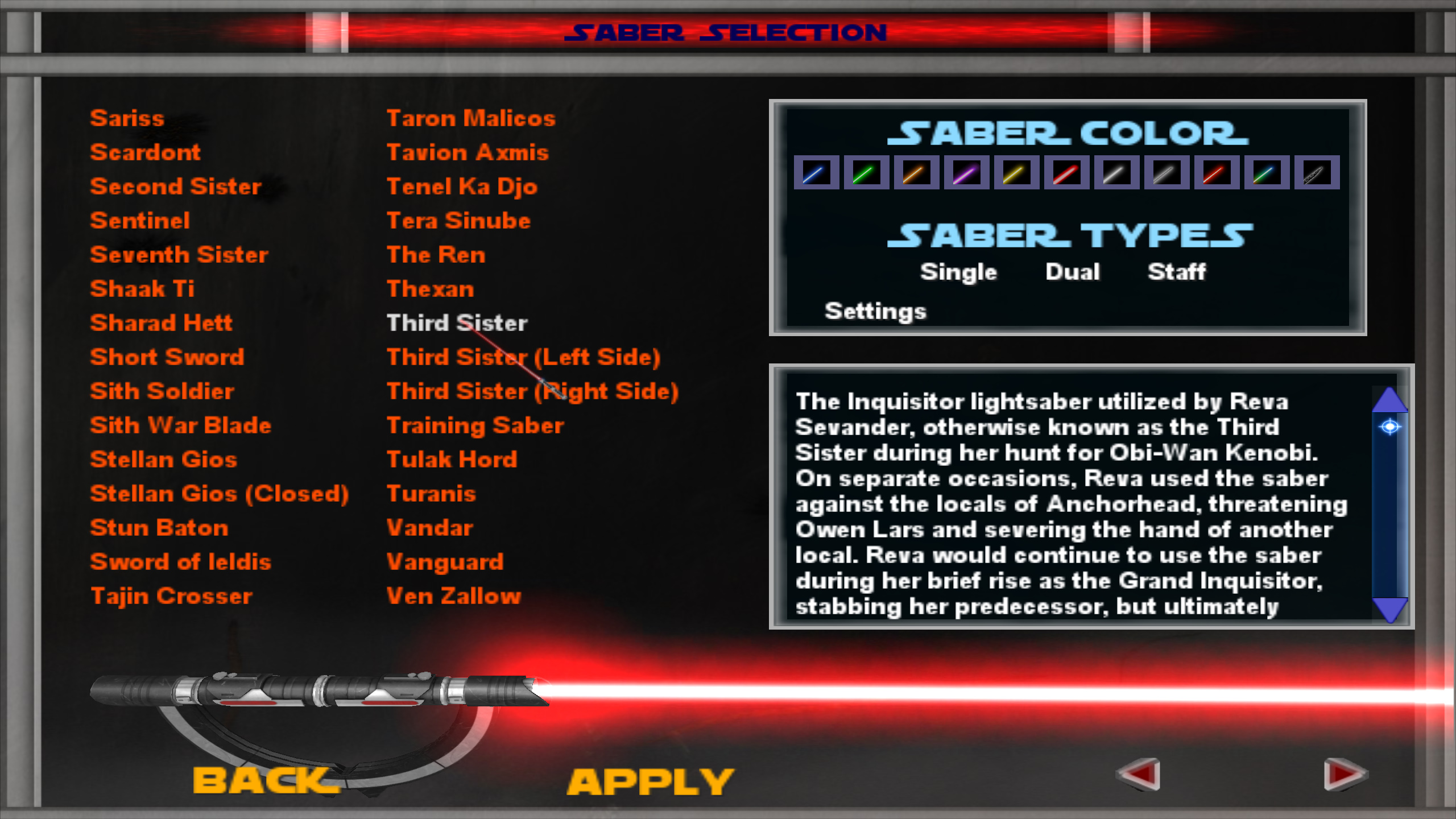 In addition to these new things and fixes, we've also taken some more time to fix up and add some other minor things. Including, but not limited to:

- Fixed some bad team assignments for some characters when spawning them from the console without changing anything else
- Created a new soundset for Luke Skywalker (Sequel Trilogy), using voice lines from Mark Hamill's performances from The Last Jedi and The Rise of Skywalker.

- Lowered the volume of Darth Vader's breathing so it's no longer extremely loud.

- Increased the force power cost of Force Blast from 30 to 40, given the power's OP nature.

- Adding new logic for the player to adopt the health and force of their character selected (disabled in missions) as a toggleable option.

- Using a bacta tank or force heal while playing as Kyle (or someone using a Kyle soundset) will play his healing sound instead of the default Jaden sound.

- Return Father vs. Son as a playable mission
- Remove maps from the MP listing that no longer exist
- Add a toggle option to allow players to adopt the health and Force of any character they choose in sandbox mission.
- Add more characters
- Add more maps
- Fix a bug where your character would have no textures upon loading a save

An overall summary of the mod during the month of June 2022.

An overall status of the mod during the month of May 2022.

An overall status of the mod during the month of March 2022.

An overall status of the mod during the month of February.

A rebuild of the released 2015 SerenityJediEngine. Many code fixes and additional features. Supports single and multiplayer. Serenity has given me permission...

This is the full release for V1.9.1.1. It is suitable for Linux, Windows and MacOS systems, including server hosts.

This is the incremental update for V1.9 to V1.9.1.1. It is suitable for Linux, Windows and MacOS systems, including server hosts.

The fifth big update to Movie Duels has arrived! Featuring three new missions, Duel Maps from Dark Forces 2, and more! This release is also split into...

The fifth big update to Movie Duels has arrived! Featuring three new missions, Duel Maps from Dark Forces 2, and more! This release is also split into...

I love the mods that's become Imaginary that just Flop on their butthole.

that is kid friendly?

Friend I loved that now you can save the game anywhere in the mission! Good job I loved the new update. I wanted to know and ask if the mod could add a clone of the 501st with a jetpack like the one from battlefront 2 (2005)

Are these 2 different mods for the same game ?

One is more for multiplayers i presume.

How do you fix this error on OpenJK?

expansion pack of the
jedi academy

This game is a classic just outrageous fun to be in multiplayer and force choke people off ledges or get in to a intense lightsaber duel sigleplayer is fantastic I think it is a great game and thats that.