REQUIRES GZDOOM 4.4.2 Replaces all weapons, enemies and items with Star Wars themed assets. Gameplay is changed quite a lot, but attempts to keep some of the balance of Doom. Most projectiles are 3d models of Star Wars blaster effects. Infighting is also rare and usually only happens between imperials, aliens and bounty hunters (they won't attack their own team). The Icon of Sin is also replaced with a more traditional boss enemy, Emperor Palpatine. You can also find a lightsaber and unlock force powers, or even start off as a Jedi.

CHANGES FROM LAST VERSION
-New HUD with Dark Forces style graphics, classic ZDoom style hud replaces the "no hud"
-Update to textures pack (separate download)
-Update to props pack
-Status bar will now show secondary ammo
-Status bar will now show force powers if unlocked, and using a weapon without secondary ammo
-New hotkeys for quickly using a held item, all of them are optional but I would highly recommend setting up a hotkey for at least the enviro-suit to make up for it not being automatically used when picked up
-Updated enemy "stun states" from the e-11's stun blast, enemies now glow with cyan sparks and are stuck in their stun state until it is finished (time depends on the enemy, usually weaker enemies are stunned longer)
-The Dianoga aka "trash monster" will now spawn replacing demons and specters that are in the water, thanks to ACS code shared by Wardust
-Enemies that replace DoomImps will sometimes not drop anything after being taken down
-Gold Probe droids HP has been nerfed down to be the same as regular probe droids and they now spawn less often
-PLX Rockets nerfed a bit, damage is lower and secondary speed is slower
-PLX Rocket projectile sprite now looks more like the ammo they fire
-Fixed TIE Fighters not being able to spawn with cyberdemons
-Fixed snowtrooper death animation
-A few items have been scaled down in size
-A few GLDEFs have been fixed up a bit
-Added A-Wing and B-Wing starfighters to the heavy transponder spawning roster
-New exploding death animations for stormtroopers, sprites by Wardust
-Updated sprite for the Imperial Royal Guard, helmet has been redone to look more recognizable and they are now holding a shock stick
-New Death Trooper sprite by Wardust, it's a bit more hi-res but I don't think it clashes with the other sprites too much, plus it looks more film accurate
-New boss-tier enemy : Jerec from Dark Forces II, a rare sith inquisitor that spawns with Archviles, about as rare as Vader used to be and Vader is now a bit more rare
-Remote Detpacks can now be thrown further by holding down the attack button, have fun
-New "upgraded" weapon: EE-4 Carbine, a spread fire blaster, very rare and pairs with EE-3 Carbine, has a small chance to be dropped by shadow stormtroopers
-New grenade for trooper class: CryoBan grenades, which freeze enemies. Only obtained in ammo backpacks. 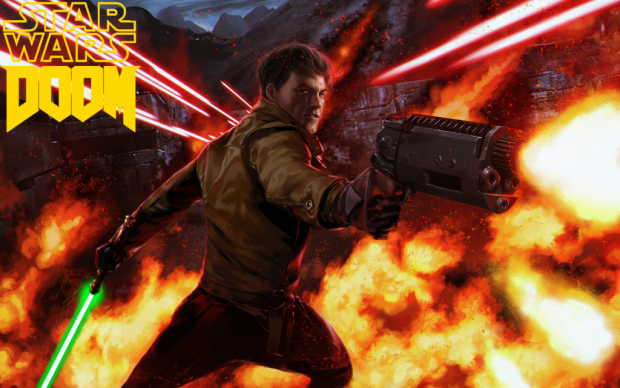 Sorry for not mentioning earlier, I kind of did a quick bugfix and announced it on the ZDoom forums, but forgot to say anything here. But if you're having issues with dark jedi becoming invincible try re-downloading the mod. If you downloaded after Nov. 11th than don't worry about it.

Ximmerman, hey buddy, is there any chance that you could release the full console command list that is in the mod? I would like to be able to know what all the console commands are.

Not sure what you mean. I haven't added any console commands, not sure if that's even possible to do. What are you trying to do exactly? Do you just want to know the spawn names of things to summon? I have a list of most of the new actors, you can ignore the numbers in front of the names though.

ı cant use mod there is errors in dark trooper file and some script files?

Make sure your version GZDoom is up to date, older versions will get errors. If there are still issues it might be something else.