“No one would have believed in the last years of the nineteenth century that this world was being watched keenly and closely by intelligences greater than man's and yet as mortal as his own; that as men busied themselves about their various concerns they were scrutinised and studied, perhaps almost as narrowly as a man with a microscope might scrutinise the transient creatures that swarm and multiply in a drop of water.”

Solar Worlds at War is a mod that takes inspiration and is based off the War of The World Mythos and aims to build off it. It also takes inspiration from Edisons Conquest of Mars, the 1950s WOTW movie, WOTW Goliath, and various other SciFi stories from the early 20th century and is meant to try and follow the classic scifi designs.

The Mod itself is set in a alternate universe years after the Events of HG Wells War of the Worlds Novel have taken place. Humanity has survived the first battle, the first Martian Invasion force has failed and died off due to bacteria, and human technology has exponentially advanced from reverse engineering the Martian tech. But as time has passed since the original invasion, a new dark force grows as the Martians plan a second invasion. In the meanwhile Earth builds its own war machines and has discovered the secret to mastering a space force and the heatray. The Great Martian Wars for survival are about to begin!


I invite you to my Personal Discord

What is this mod, and what is it about?

Anyways lets go onto this Solar Worlds at War mod. This is a mod that I had been planning to make before I even started IDN; I had also been working on it in the meantime while working on IDN itself as working on IDN gave me experience in regards to rigging, animating, and making models. I know your probably asking "what is this weird mod and what is it about and why such a weird name". Ill answer those questions, starting with the Solar Worlds name; i'll admit I couldnt think of a better name that wasnt taken either by a different game, or game mod, or movie. So I just picked this name.

As for the main question of "what is this mod even about", Solar Worlds is a mod that is based off the world of HG Wells classic War of the Worlds Novel from the late 19th century. This mod takes place around the start of the 20th century in a alternate universe where the events of the War of the worlds and prelude events to Edisons Conquest of Mars novel had taken place, with aspects of both series being expanded and aspects taken from series like WOTW Goliath and the Jeff Wayne WOTW RTS game.

As a small summary in the Solar Worlds universe, the Martians had launched an attack on Earth near the end of the 19th century. The Martians nearly succeeding in conquering the world and exterminating humans, but they were stopped by the humblest of creatures, ie bacteria.
With the Martian invasion a failure, Earth was able to recover and humans were able to reverse engineer the Martians advanced tech; with great minds like Thomas Edison and Nickolas Tesla, who cracked the secret behind how the basics of the Martians tech worked, being responsible for tech development of spacecraft and the heatray/space propulsion respectively. This allowed technology to advance very quickly and the world became steampunkish and living standards became increased. Due to the previous invasion, US President Theodore Roosevelt had drafted plans for a military alliance to be formed to build a space force that could protect Earth from another Martian invasion. In the meantime, the Martians had upgraded their technology and had launched conquests on other worlds, to replenish their resources and arsenals, with moderate but very costly success. Seeing that Mars was dying, that the Martians finally have a way to survive against the Earth bacteria, and that Earth was the most energy rich world they could reach, the Martian council elected a new commander to prepare for a second invasion of Earth. While a new Great Martian War was brewing, dark forces in the rest of the sector were looking with envious and sinister eyes.

What are your plans for this mod and its future?

This mod will be based off the various War of the Worlds series mythos and various other 20th century Scifi stories but it'll have its own twists. The plan currently is to have multiple eras, multiple playable factions, and a variety of units and playstyles.
For example the first era (which is what i am currently focusing on) will be based off the imminent time period after the War of the Worlds novel, and it's world will be more "steampunish". Playable factions will be Earth Alliance led by T Roosevelt, Martians led by an elite tactician commander of the Martian council, and perhaps a 2nd Xeno Empire faction, but it'll mostly revolve around the Great Martian Wars between Humans and the parasitic Martians who conquered most of the solar system and the worlds surrounding it.

For era progression, my plans currently are to lock era progression to be story based, meaning that not all GC will have all eras available, and certain GC may be locked to only 1 era. It will also mean that the later the era, the better the weapons. Though there will be certain constants shared between all eras, such as the Xenos usually having better tanks and capital ships than the Human faction. Certain mechanics will remain unique to certain factions, such as Martians having exclusive access to the black smoke canisters, and continuing to use tripod/walker designs for their technology. Perhaps certain condition unlocks will be added to unlock special/unique units. As it currently is, the mod still has some planning to do and unit models to be finished. Amount of planets in GC will probably vary based on era as well due to later era meaning better propulsion technology. Overall I'm looking to make a unique mod and bring the magic of War of the Worlds to modern rts format as EAW seems like a perfect place to add it!
Ill post a unit roster soon.

Heres some screenshots of units that will be in the mod (note that many models are still being made, and that certain ones are still WIP and may change).

The Original Martian Fighting Machine, which will server as their main tank until the Mark 2 fighting machine is developed by them: 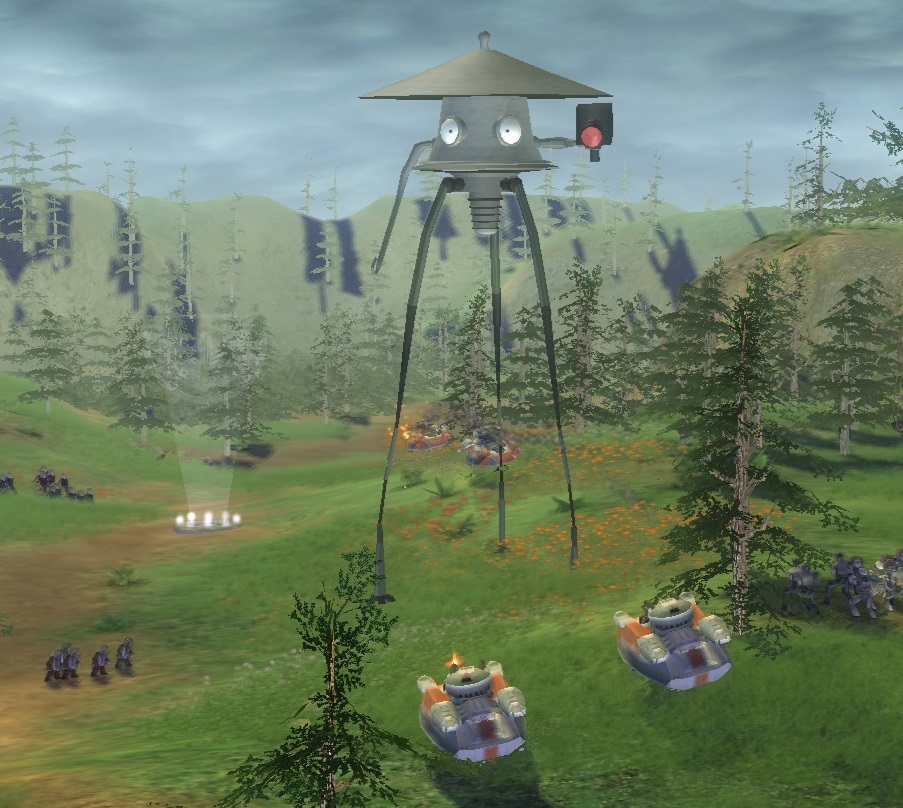 Winged Edison Corvette, which is an upgrade to the original Edison class frigated used by the Earth forces:

Lancer Space fighters are the First starfighters usable by the Human faction: 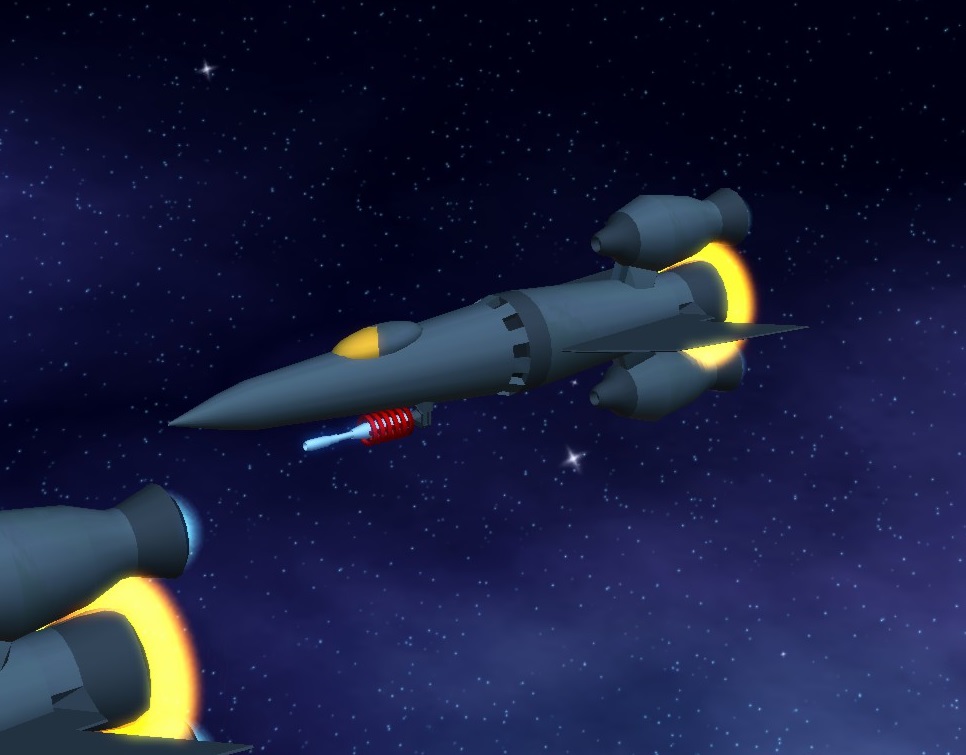 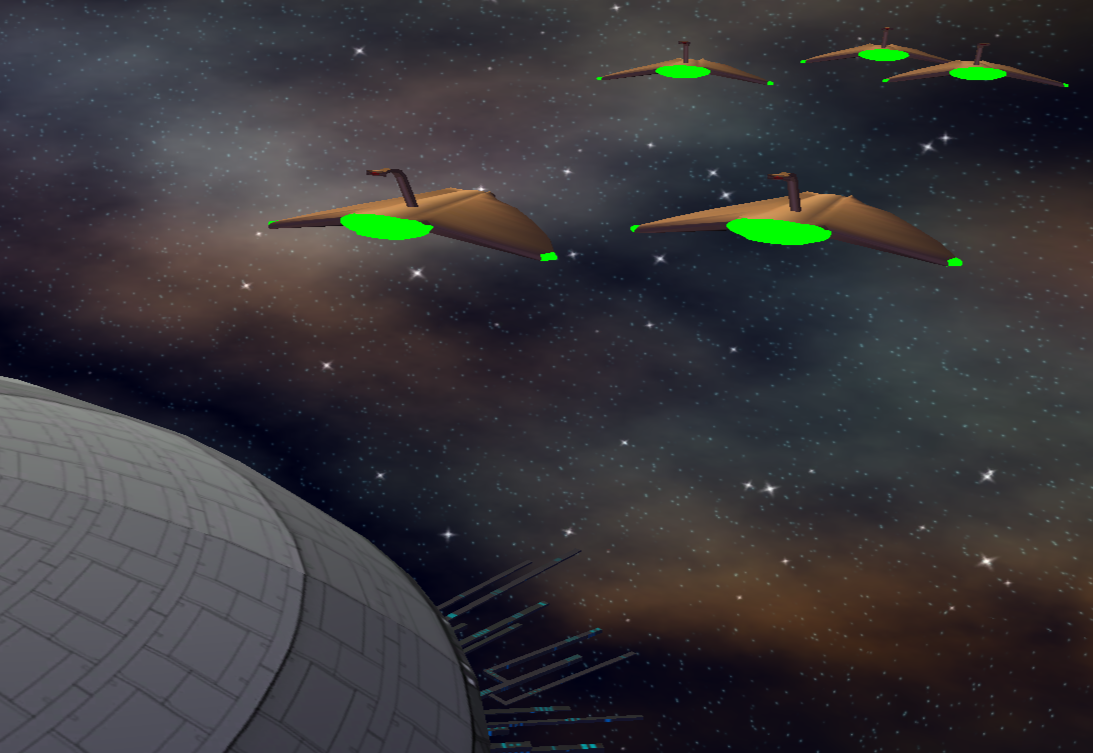 I like the idea, im even excited to see where this goes, im following this is phenomenal.

Various new models are being worked on. A flamethower tank has been added and ill soon make a earth defense artillery tank that resembles a crab. Mod is a bit slow as I have alot of work irl.

just an fyi guys. I have been working on models for this mod, I just didnt post pictures of them yet. Martian ground units overall are proceeding well, they just needs animations and textures. And i will remake the 1953 wotw fighting machine as well as I dont like their current model. I also have a heavier tripod model in progress that looks like the tripod from the Tripods novel.

am i one of the only ones that has read every single description?

My interest has most definitely been piqued! Will be keeping an eye on this one.

This is going to be exciting.

The page for this mod hasnt been updated in a while, but dont worry this project is being worked on still.

Yes, it will be on steam workshop