Orion: Ground Zero is a 2-player coop altered melee map featuring 6 unique subfactions to choose from to go up against 6 Zerg Broods, each with their own techtree and specialties.

The objective of the map is to gather an amount of Crimson Minerals and destroy sufficient enemy Broods. In order to do this, you have to keep a balance between offense and defense, take advantage of control points, know when to call in support powers to aid you and secure strategic areas in the map to hold the enemy off more efficiently.

The map lasts, on average, for 30-60 minutes. It varies depending on the selected difficulty however.

(full lore can be read ingame in the help menu)

After Kerrigan's victory and the fall of the New Overmind, a number of Broods, defiant of the Queen of Blades, have fled to a distant uncharted planet. There they began to recover, attempting to form a new Swarm to overthrow Kerrigan and restore the Overmind's glory to the Swarm. Only one of these Broods still had a surviving Cerebrate, Baelrog Brood, and as such they attempted to subjugate the other Broods.

The Broods were quick to discover a new resource on the planet with grand psionic capabilities, however, situated in parts of the planet's surface. They used this resource to create leaders of their own and defied Baelrog. After a long, brutal civil war, Baelrog had either devoured, destroyed or enslaved the Broods.

Months after that incident, numerous Terran groups and Protoss expedition parties have located this new planet, and the resource as well. Mining operations had been organized and escorted with military forces, to ensure their safety. They did not anticipate to encounter some old foes, however.

As previously mentioned, random events will occur, Nydus Worms (and Dragons) will spawn and Control Points will influence the outcome of battles.

There are 3 events in total; Lava Surge, Thick Fog and Drop Pods. Lava Surges will cover the lower ground of the map, where the Crimson Minerals are located, incinerating any ground unit that passes through, Thick Fogs will limit your units' vision while it's active, and Drop Pods will reinforce the enemy with a number of squads that will be sent after your forces and/or bases.

On higher difficulties, for every 3 sets of Worms that spawn, a Nydus Dragon will instead emerge. Nydus Dragons are enormous monsters that lob fireballs at you from extremely long ranges and can tunnel around their surrounding area. However, they take some time to spawn, unlike Nydus Worms, giving you a window where you can inflict as much damage as you can with no retaliation.

The Control Points activate after 5 minutes into the game and randomize every 3 minutes. Some points are preset to always have a negative effect (such as the one in your home base), while others are preset to always have a positive effect (such as the three points in Baelrog's bases), the rest are neutral and have both types of effects. There is also a chance that a Control Point will be deactivated until the next randomization.

There are 6 Broods in total; Jormungand, Surtur, Tiamat, Garm, Fenris, and the most powerful of them, Baelrog.

Jormungand relies purely on quantity over quality, and will send the largest attack waves at you. Surtur is the opposite, making use of fewer, yet more durable, powerful and heavier units.

Tiamat specializes in aerial combat and will rarely attack you with ground forces (apart from early in the game). Garm plays more sneakily, relying on burrowing units and suspressing detection.

On the other hand, Fenris excells at using spellcasters and supporting their allies. Lastly, Baelrog is the "perfect" Brood, excelling in nearly every department and using elite units. They will rarely attack compared to other Broods, however. Take caution when engaging them.

Also, on top of each Brood using their own exclusive units, as the game goes on they will make use of elite strains; these strains are enhanced versions of normal units and are very dangerous. Initially, they will act as captains in assault waves, but the longer a Brood survives, the more frequent these strains will become.

Special thanks to Rohirrim for helping test the map and for his suggestions, and Beider along with various others for their tutorials, which helped me learn the editor.

Orion: Ground Zero has just been patched! This version has new additions, such as the Solar Eclipse event & a new scoreboard/rank system, as well as numerous small changes. 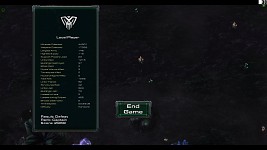 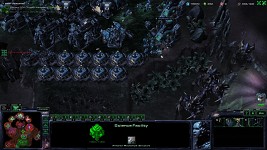 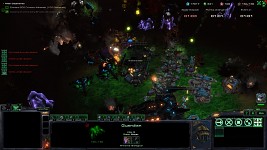 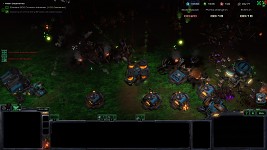 Can you achieve the rank of Supreme Commander or Praetor? Survive the Zerg onslaught during the Eclipse? Take on the even more challenging than before Hardcore difficulty?

- Added a scoreboard & ranks. Can you achieve the rank of Supreme Commander or Praetor?
- New events: Solar Eclipse, Reinforcements & Investment
- Added countdown timers for events & control points
- When a Brood is destroyed, the players are now rewarded with Crimson Minerals (bonus minerals if destroyed early on)
- Easy difficulties have been made easier, and hard ones harder
- Zerg Drop Pods are now weaker in lower difficulties & stronger in higher ones
- On higher difficulties, Broods become more aggressive & are enraged more easily

- Lava Surges will no longer occur before the 10 minute mark
- Prospectors' Syndicate Power Plants are now passive & do not explode on death, but are less durable
- Changed the lighting of low ground lava-susceptible areas to be more reddish
- Added a command to turn control point minimap symbols on/off
- Fixed bug: Air Raid Gunships would return to the bottom of the map if no enemies were nearby. They now patrol the area.
- Numerous small bug fixes, balance changes & visual changes

Good luck, and have fun!

Orion: Ground Zero has just been patched! A lot of improvements and bug fixes have been made!

Orion: Ground Zero v1.2 is being worked on, taking feedback and suggestions!

Orion: Ground Zero has just been patched! A lot of things have been fixed and improved!

is anyone working on modifications to the Starcraft 2 campaigns? adding more or new units, adding more missions, and making the game longer or better?

Geistkrieg - A Shadow Over Egypt Starcraft II: Heart of the Swarm