A experimental mod for C&C:Yuri's Revenge with Ares support...

Hello again! This time I present a new version of the Soviet conscript along with a system of variants.

In NextGeneration. I try to give the Soviet conscript a more modern look compared to the original game. Use two types of weapons, a kalashnikov rifle to fight other infantry and an RPG-7 rocket launcher to take on tanks and buildings. 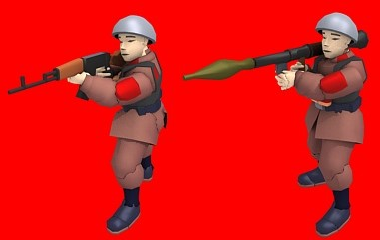 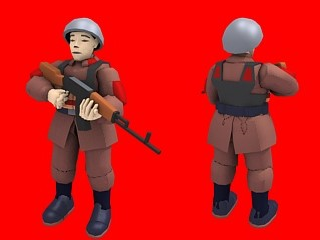 Some basic units can reach elite level directly by destroying a much more powerful unit. This fact together with the "Type Conversion" logic of the Ares can be used so that this unit transforms into one or another variant depending on the level of veterancy it reaches. 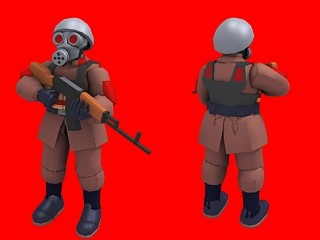 Fallout Conscript are veteran variant of Regular Conscript. Equipped with protective gear that gives it more resistance against chemical weapons. 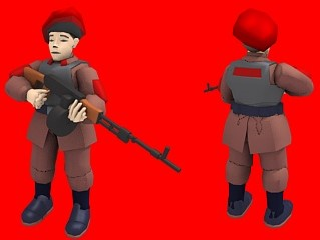 I would just like to say your 3D modelling of infantry is incredible and fits in almost perfectly with the original style of RA2, something that not many modders have achieved over the many years I have been a part of this community. Usually modders would rely on 'cut and paste' style SHPs or ports of models/sprites from other games.

A constructive critisism I may suggest would be that your models have a rather fine dark/black boarder around them that you do not see in original RA2/YR infantry SHPs. Whether this is intentional or not, it ultimately makes them stand out from the original SHPs so perhaps work on removing that where applicable and you may unstand what I mean and see the difference yourself.

But once again, great job, really are an infantry master :)

Hey nobody likes that mod and you continuing to SPAM this stupid idea in everyones mods its disrespectful.

Hey, nice infantry art,looks very RA2-ish. Would you like to join the Mod Haven modding server in Discord? It hosts many cool mods, including the known ones like ROTE and Final War, many skilled asset creators and mod authors from the YR modding community are also there. This is also where Phobos engine extension takes place, you may want to use it unless you already do. The server is here:

oh man, this looks very interesting but probably would take an eon to finish.

Is this mod still alive?

Single Player
Tags
Embed Buttons
Link to Next Generation by selecting a button and using the embed code provided more...