Welcome to Jedi Knight Remastered! This installation file will install the JKGFXMOD the Jedi Knight Neural Upscale Texture Pack and the Enhancement mod all together in a nice installer! The FOV Mod is also been added. This also patches the game with the unofficial patch. All mods can be downloaded and installed separately if you desire.

The Mod is not Launched from the JK.exe use the inject.exe to launch the game. A shortcut should have been created to go to the inject.exe. Also before launching the game if you have windows please add an exception in windows defender for the inject.exe or it will be flagged as a virus and may even get deleted.

*Note inject.exe may flag as a virus please add it as an exception. For explanation on this please see: Github.com

Jedi Knight Neural Upscale Texture Pack
Moddb.com
This is a replacement texture pack for Jedi Knight: Dark Forces II. These textures were upscaled using ESRGAN and a custom model. This texture pack is intended for use by mod authors as a base for their own high-resolution retexture projects. Although this texture pack is usable without further changes, the textures in this pack are quite raw. Most of them have artifacts from the upscaling process, which in a complete effort should be manually removed by an artist.

I know there is a lot of issues out there and sorry but I probably won't be able to help with all of them but we can try to fix them as they come in. Best way to reach me though is on my YouTube channel just comment on one of the videos there: Youtube.com

OpenJKDF2 is a function-by-function reimplementation of DF2 in C, with 64-bit ports to MacOS and Linux. Files are organized as closely to the original game as possible, based on symbols from the Grim Fandango Remaster Android/Linux/macOS port, as well as scattered assertions from various other games. It also contains the original versions of byacc and flex used for COG script parsing. Created by Max Thomas. Find this Project here: OpenJKDF2 For more information on this project check out this great video below:

Last Month after reaching out to Max about the Texture packs he released a version of OpenJKDF2 that actually allows us to implement the "Remastered" Texture packs into this new Engine of the Game! One of the best features about this new engine is it has in game configurations! Unlike the JKGFXMOD (where you had to open the jkgm.json file in order to configure it) for OpenJKDF2 all you have to do is open up the display menu and you have all kinds of options added! You can now even change Field of view and Limit the Frame Rate from this menu and it doesn't require extra Exe files or separate third party programs! Check out the screen shot below showing all the amazing features that the Mod has in the menu! 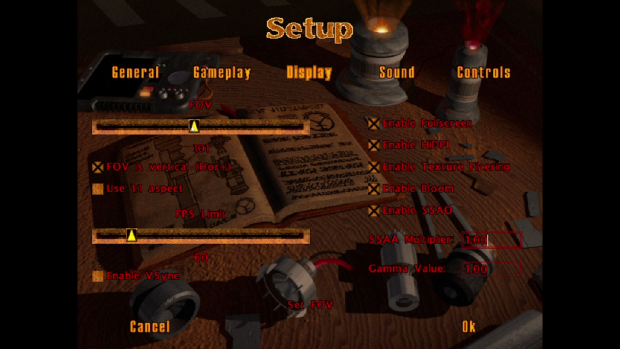 How to Install OpenJKDF2 with "Remastered" Texture Packs

Installation takes a bit of work but it is actually fairly simple and I believe most users should have no problem.

Then Watch Video Guide below:

The next version of the Mod 3.0 is going to Feature OpenJKDF2 as the backbone of the installation rather than the JKGFXMOD! So stay tuned for that! For now either enjoy 2.0 installer or you can watch how to manually install OpenJKDF2 above. Unfortunately, Mysteries of the Sith is not compatible with OpenJKDF2 however Max Thomas has mentioned that he will be creating an engine for that game as well later on in the future!

There is still pros and cons to each version but at the end of the day everyone should have the ability now get a somewhat remastered version of this amazing game! Maybe someday will get an even better remastered but for now enjoy these amazing Open Source engines! Until the next one guys! And May the Force by with you!

Has the mod Stuttered on you? Has it lagged here or there? This fix may help you!

JKGFXMOD and the graphical enhancement packs all together in a nice installation file now on the latest versions! MOTS Remastered 2.0 Released!

Its been a long time coming but I finally have the Jedi Knight Remastered latest and greatest version of the mod installer completed! Just in time for...

At long last this is the installer for the latest JKGFXMOD as well has the enhancement packs together in a nice installation file!

The Long awaited 2.0 installer is here! This installation file will install the JKGFXMOD, the Jedi Knight Neural Upscale Texture Pack and the Enhancement...

Updated Jedi Knight Remastered Configuration Guide. Adds how to change icons for the shortcuts and adding other mods to the game. Updated added fixes...

Hello this is just a pack of optional icons to change the shortcuts to.

Welcome to Jedi Knight Remastered! This installation file will install the JKGFXMOD the Jedi Knight Neural Upscale Texture Pack and the Enhancement mod...

Any suggestions on how I can solve this?

I got this issue before from Not having a Graphics card installed on my test PC but I also may want to check make sure your Antivirus didn't flag the inject.exe and get deleted. Without the inject.exe it wont run. Please see about adding an exception for it if this is the issue.

Hello! Really appreciate the work that's been put into this. Can't stress that enough. 2.0 release is awesome! I have big nostalgia feels for this game. I'm blown away at how good this looks. Also, as mentioned in the comments before I believe, I'd highly suggest installing RivaTuner for this game. Using RivaTuner to cap your fps at 40 fixes weapon change animations and weird camera chunkiness. It makes the game play much closer to original intent.

So I ended up playing through the whole game on medium. Had a great time. Everything worked great. I have a problem now, though, after trying to create a second player profile on the hard difficulty. I can start the game with New Game and play but once you save and quit, the second profile cannot load any of them. I tried different difficulties and additional profiles. It all ends with either a crash or drop back to menu with the message "Error" "Could not load level!". The original profile can still load any save just fine. Any other profile cannot. Is this a known thing?

EDIT: Figured it out. It was the 'Legs in 1st person' addon. Once I deleted that everything loads fine.

Yes! Thats what has cause my game to crash probably thanks for finding this out man!

Mod does NOT work!!
Tried it for HOURS!!
I have the GOG-Version, i installed the MOD and tried it out SEVERAL Times with help of the "Configuration Guide 2.0", no Chance, Game does NOT start, not even in Windowed-Mode!!
It is active in the Task-Manager, yes, but nothing more!!
Even after waiting a little longer, the game did NOT start!!
Wasted time!!

Try patching the game with this unofficial patch first and then installing the mod. It worked for me and I also used the GOG version. Here is the download link:
Community.pcgamingwiki.com

Unofficial patch should already be included. Check make sure you are not using the JK.exe in the configuration guide it shows what ones are to be used.

Hi,
Thanks for this installer. Works great, though I initially was having problems because I had my Windows display settings set to 175% zoom. Once I changed that to 100% it worked perfectly. I noticed others having the same issue. Might be something to add to the install guide.

Question: Windows defender flags 'inject.exe' as having the trojan 'Ymacco.AA5A'.
That trojan is commonly used to steal people's personal info, passwords etc. Is there a reason why it's packaged in here?
Thanks.

Yeah I though I had the screen size issue addressed in the guide but maybe not.
And
No the Creator of the JKGFXMOD said it is a false reading. You just need to add an exception in your windows defender. Inject.exe is needed to run the mod... wont work without it.