Vector Prime is dedicated to transfer you from the dimensions of Haegemonia to that galaxy far far away, deep into the conflict between the Rebel Alliance and the Galactic Empire. 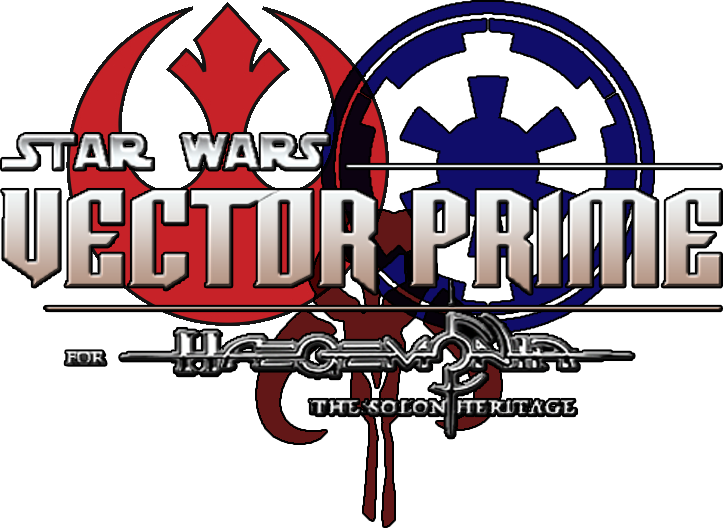 Playable factions are the Rebel Alliance, the Galactic Empire and an independent faction of smugglers and civilian corporations.

The Mod boasts a new AI system, complete with a modified User Interface, a brand-new tech-tree, and of course, specific models for every faction. Ships include those from the small TIE Fighters all the way to Imperial Star Destroyers and beyond. You will also see tiny space tugs performing repairs or collecting junk, when tasked to do so. Take wise control of your agents, and later, your cloaked spies to best utilise their capabilities in persuading hostile worlds to join your side - yet, in the meantime, keep careful track of your ships and their own specific abilities; they are all suited for a different task.

Comments, suggestions ideas and even any form of assistance is welcome and much appreciated. Have Fun!

Hi folks! It's been a while.

Major Update 4 was released back in 2011 - and boy how quick time flies. Seeing that there is renewed interest in this wonderful game called Haegemonia and its modifications, I think it's time for a quick re-brief.

I know that there hasn't been any development in the mod lately, and even back in the day I considered MU4 to be final. So I ventured off to other things and my life got gradually busier every month, every week. Luckily enough, this hasn't changed even today.

To get things straight, I certainly won't have the time to work on an MU5 - but I think I should be able to put together some bugfixes that might hinder gameplay. So I ask you, the community for help: if you are interested in making VP a fully playable, complete mod, help me by compiling a list of things you want me to look for. Just send your reports as comments to this news entry. Please be as precise and descriptive as you can be, because I want to concentrate on fixing the issue, and not spending days just trying to figure out where I should look. For example, an "AI does not colonize planets on easy difficulty, uncolonized planets in system include volcanic, arctic and ocean." helps me more than an "AI is not okay".

Well, that is pretty much it. Thanks for your continued interest in Haegemonia.

Digital Reality just announced they'll be making a new space RTS! Keep an eye on this one!

Great news! davoodoo42 has managed to backport the TSH Sound System Error fix to Legions of Iron, and what is better yet, he has shared this with the...

Something for any scifi gamer

Have you ever dreamed about the next Wing Commander, Freelancer or any similar game? Your dreams are about to become a reality. Welcome to the world of...

Thanks to positive feedback from the Haegemonia community in general, I've taken the liberty to improve the level planner by adding some error checking...

As with my previous fix this is based on "TSH Sound System and Multiplayer Fix v1.1" and includes fixes for the dreaded Sound System Error and some multiplayer...

As with my previous fix this is based on "TSH Sound System and Multiplayer Fix v1.1" and includes fixes for the dreaded Sound System Error and some multiplayer...

This is a direct Backport of the Sound Part of the TSH Fix to the Haegemonia: Legions of Iron executable. It is based on the german version 1.10 of LOI...

A map editor for Haegemonia: The Solon Heritage. Create systems, link them using jump holes and generate fully working maps in Haegemonia. Although I...

Major Update 4 is the latest version of the Major Update series: it fixes lots of bugs present in Major Update 3 and adds various new features that have...

so i just downloaded this mod and it works but its asking me for a cd key and steam doesnt provide one for this game...... so i cant play the game or the mod without it?? any help would be appreciated

It's been years since i've played this mod....but boy i would like to play it again

Can anyone help?
The game (mod) crashes on the loading screen

I wonder how this mod is doing...

hey is there any one that want to get a multiplayer game going message me. im dieing to play with real people the ai is kinda lacking, the vong are the olny ones that offer any challenge.

Good to see the mod alive and kicking.i haven't played the game for a year now and i think i will start again.welcome back bbalazs

Great mod for sure! Really many compliments!

Only a question: it seems that random map generator won't work, for me: I select "type of game" as VP, numbers of players 2 and various combinations of number of systems...

Nevermind. Just simple: I must run launcher as administrator... sorry.

However, I see that it's impossible to generate 1 system map (two or more players) , because generator can't create homeplanet and battle was lost at start. It is possible to fix this? I think that I can use level editor to see if I can do this fix after map generation.

I can confirm this bug exists, oddly enough I never noticed it. I haven't touched the generator for such a long time, I'm not sure if I can fix this problem at this point.

As for Type of game = CC..
CC stands for Colonial Conquest - another mod, which was one of my side projects some time ago. It is actually a fully functional total conversion mod based on another game called Freelancer. Even though the mod is playable (and pretty fun to play too) I never released it to the public. This is because I used models directly from Freelancer and I'm not sure I want to run into any Intellectual Property issues.

Seeing that this summer brought quite some interest in the mod, I'll put up a news entry asking if the community is interested in me picking up development.

Many thanks for reply.

OF COURSE I'm really interested to play this mod : imho is really playable and fun (SW mod for sins of a solar empire has serious problems with AI - too strong, too fast, even from easy level: I prefer your work at all, despite SoSE has superior engine than HSE).