Coterminus aims to recreate and re-add cut content into Half-Life 2, as well as provide a platform for those who wish to do the same.

Hi there! Welcome to the first article posted for my newly announced mod Coterminus. Before I go any further, I want to make something perfectly clear from the beginning. I will be releasing this mod, in some form, sometime soon™. It will not fade into obscurity like most other "beta" mods because I have already been working on it for a long time before officially announcing it. That said, I need to manage expectations about what will be released when the time comes. Before that though, I'd like to explain a little history about the mod.

I've been working on this for a long time. From a certain point of view, you could say it's been 9 years. In reality, I started this mod with no goal other than to teach myself game development and have some fun learning the source engine. Over the years of working on various things intermittently, something cohesive started emerging and I began setting some real goals and aiming towards making this a real mod.

So what has been accomplished in 9 years of development?

A lot or a little depending on perspective. While I haven’t really made any significant mapping achievements, I have been porting, polishing, and recreating cut content from the leak or otherwise the whole time. This type of endeavor has been attempted before, but I like to think that I’ve done it a little differently.

You see, a lot of mods will simply port content from the leak to retail Half Life 2 and call it done. This is fine for some things, but not for most. What I have done is add a layer of polish to things as I port them so that they are slightly higher quality and not as rough as they appear in the leak. This could mean new textures, new normal maps, new animations, model fixes, new code, etc.

A good example of this is the viewmodel for the ar2: 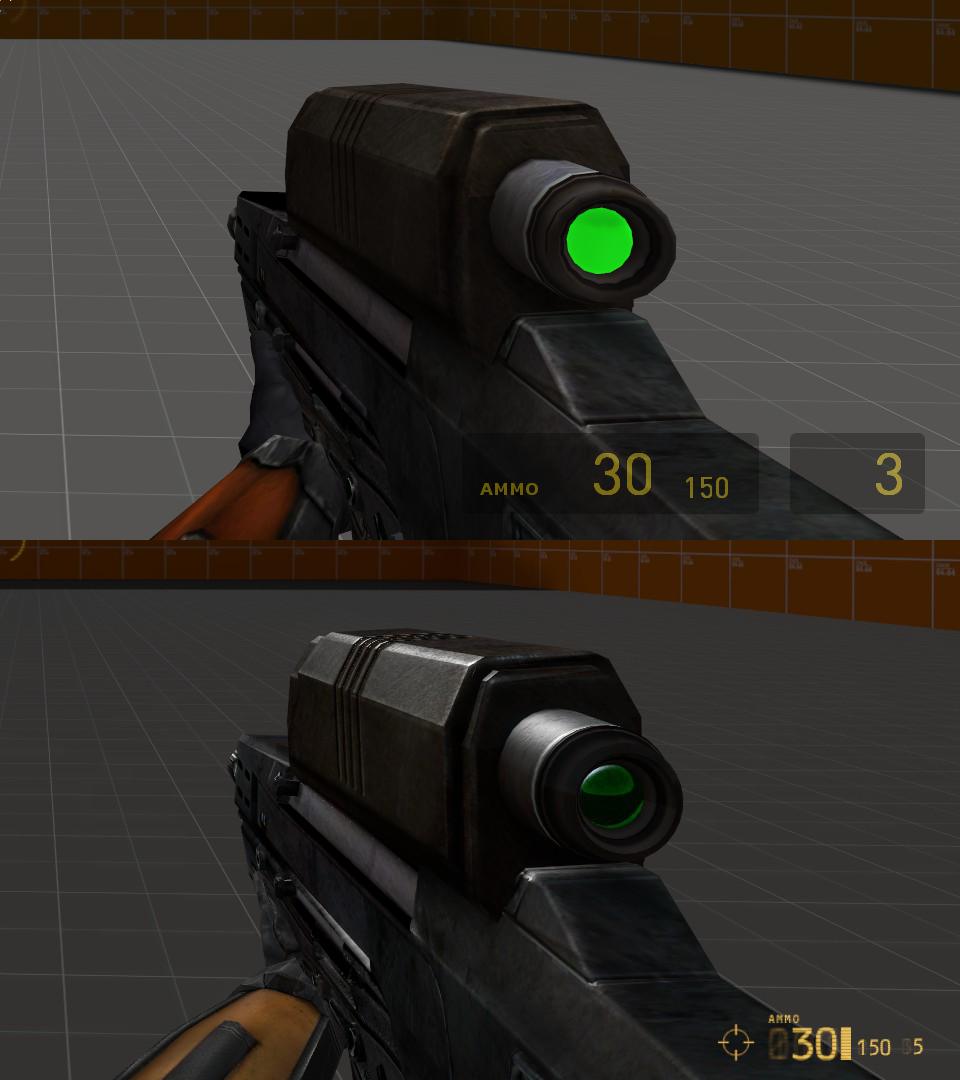 It might be hard to pick out all of the differences between my version(bottom) and the leak version(top), but here are a few things that I’ve improved about this model:

Now imagine this same treatment for literally dozens of other features, models, content, etc. I would love to show you some more ways in which I’m polishing old content, but for now you can find a few videos in the media section that should demonstrate something similar.

I can’t take all the credit for various content fixes though. For example, a lot of the new models included in the mod were graciously donated to me by my old friend Red Katana. The sniper rifle is an example of one of the models he made.

What will I be able to play when the mod releases?

New and improved content is great and all, but it’s kinda useless without somewhere to interact with it. Like I said before, I’m not much of a mapper. I hadn’t really focused on the mapping aspect of the mod until last year. The first release of this mod will probably feature a revamped prison chapter AT LEAST. This prison chapter is my reimagining of the retail Nova Prospekt with a ton of “beta stuff” crammed in. So far, I have a few reworked retail maps and a few beta maps working together to make a whole new prison experience. I will release a separate article in the upcoming weeks detailing more about what to expect in this chapter. For now, here are some comparison shots between retail Half Life 2(top) and Coterminus(bottom). 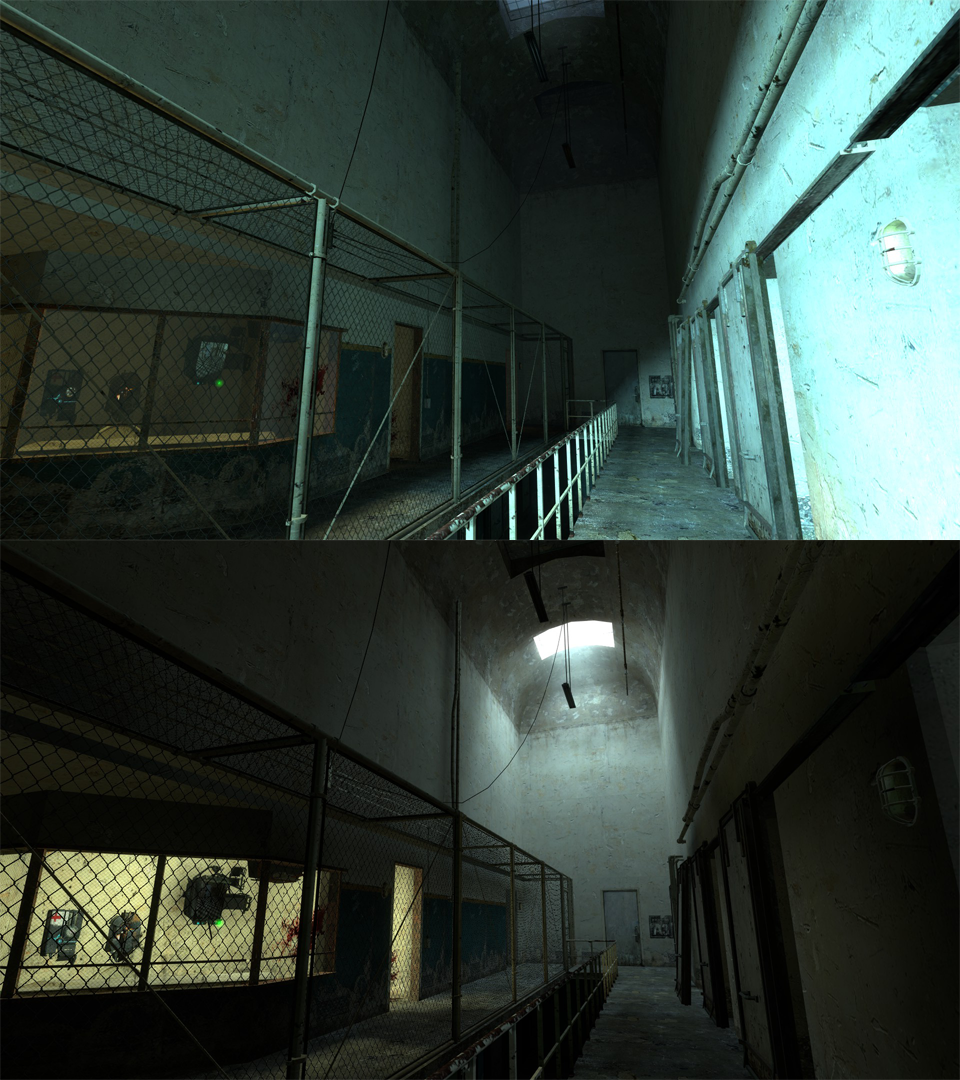 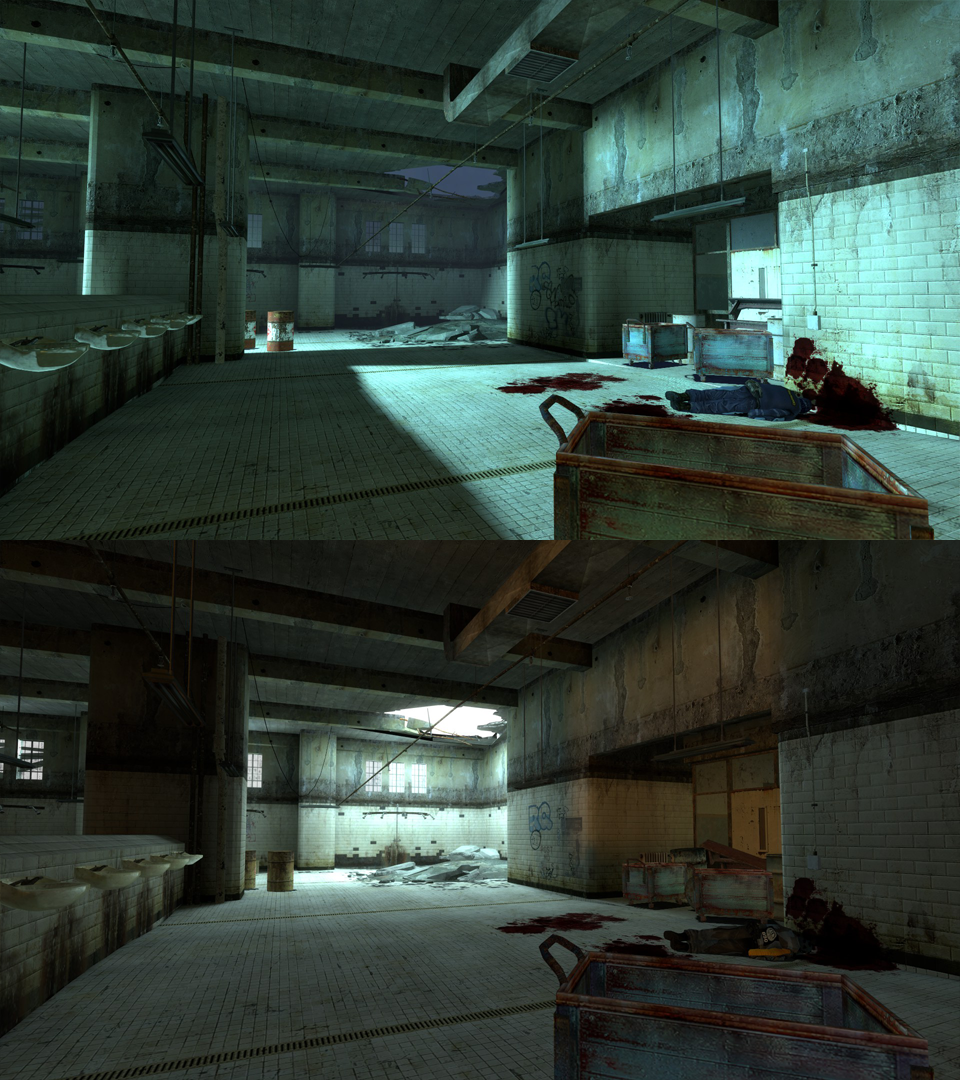 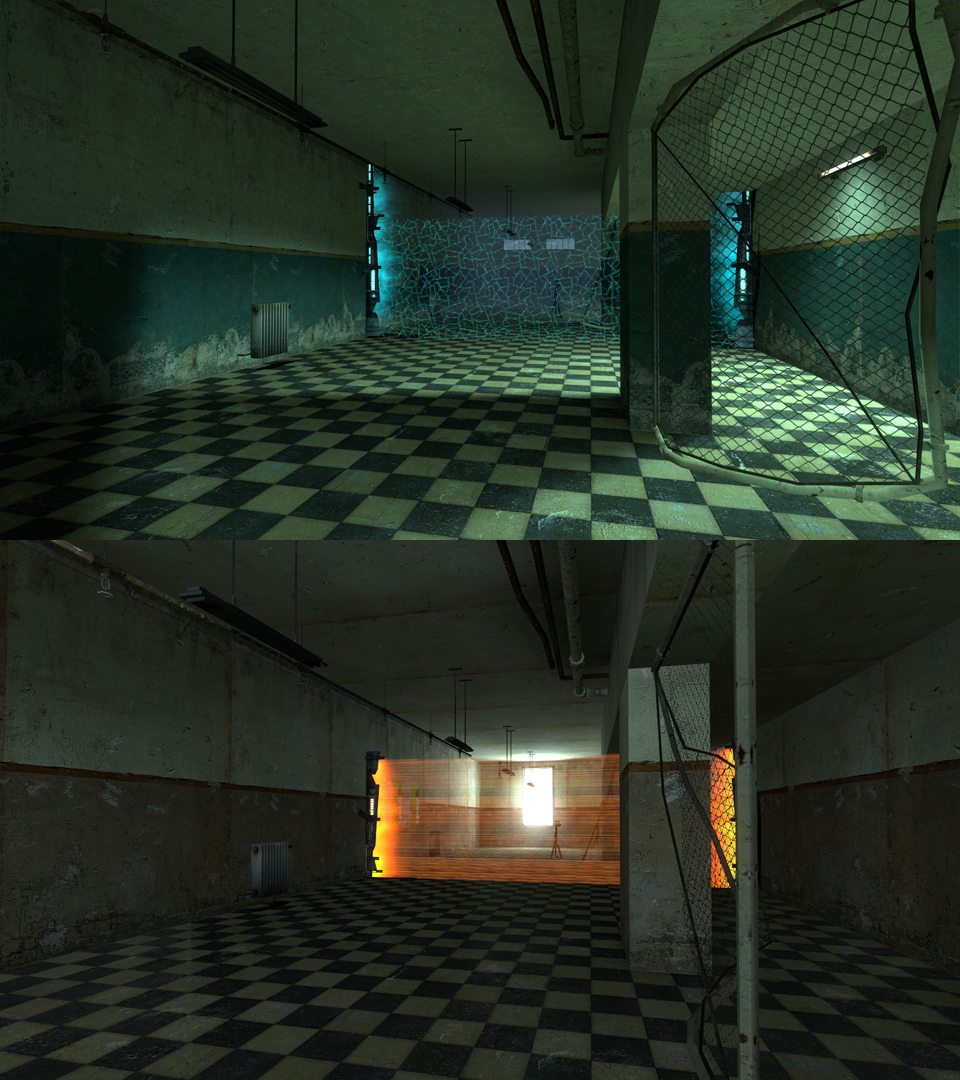 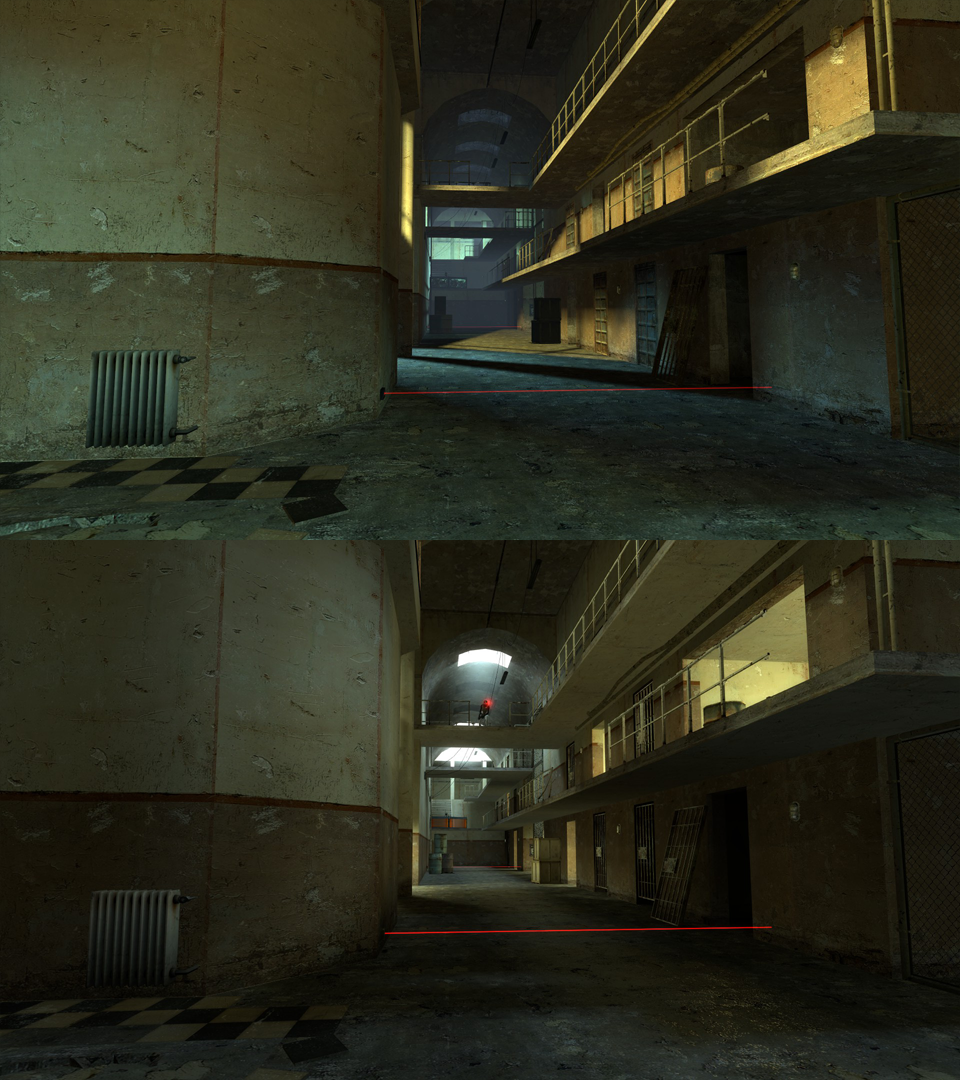 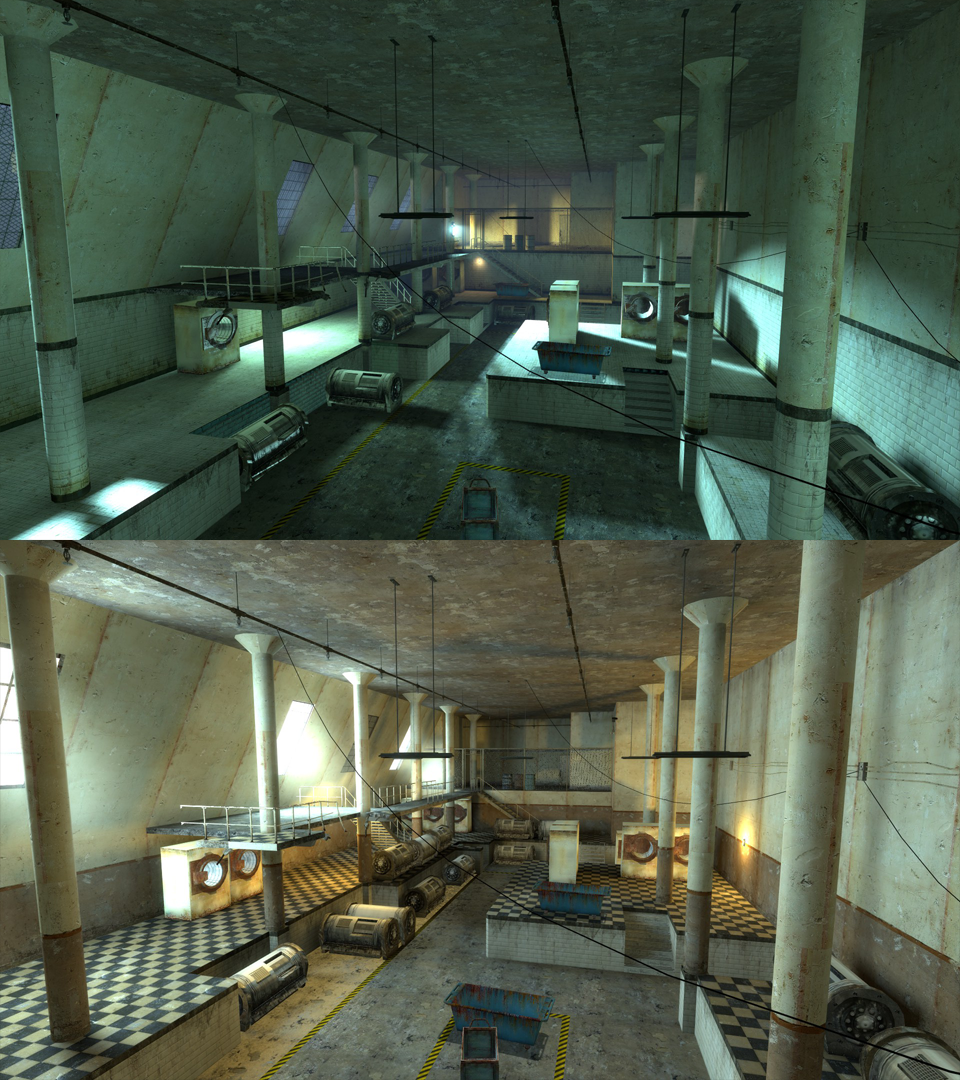 The future and the community

So, what’s next? Well, another major goal of mine while making this mod was to provide a platform for other modders to make use of. As I’ve said before, there are dozens of reworked features and pieces of added content. I want people to use this mod as they see fit to make their own maps and stories. There are tons of maps and recreated chapters on Project Beta’s website that would be perfect for porting to this mod, but the decision to do that may be up to the authors of those fixed maps. If you happen to be one of those people and you want to port your maps to Coterminus, feel free to get in touch with me to get access to the repo so that you can start porting asap.

I will be updating this moddb page with new media and articles in the coming weeks and months. Please watch this space if you have any interest in what I’ve described so far. I also really look forward to hearing your feedback about what I’ve shown, so please leave me comments, suggestions, anything!

Thank you all so much for making it to the end of the article, I’m so excited for the future of this mod and I hope you are too.

Incredible work, man.
A question, however: Do you plan on allowing individuals to freely incorporate the materials from this into their own mods/maps?

For example, someone using the bullsquid in a canals-like map.

First of all, this looks really great. Second of all, could you maybe try implementing the E3 2002 trailer view bob as a cvar? That would be fantastic.

I'm not sure what you're referencing specifically, but I'm definitely open to adding features. If you want to message me separately about this, feel free.

I assume eymane is reffering to the bobbing movement of the viewmodels.

Yup he was, it has now been added to Coterminus!

is there a date set so far for release?

Nope, there's still a decent amount of work left to do before I do any sort of release but the good news is that it's mostly just mapping.

"just a thought"
Wouldn't it be easier to release the base mod now and release the maps your working on later? Not that you should do this,but I just thought I would ask you this because its like you said in the post,there are tons of maps and recreated chapters in hl2-beta.ru

I had thought about this in the past and I made the decision to author some maps for the mod because I didn't want the first release of the mod to have literally zero gameplay. The unintended benefit of this decision is that by trying to use "finished" npcs and weapons in various types of gameplay, I've realized that certain things needed tweaking or changing and revisiting some stuff has made it more viable from a gameplay perspective, which will help other people in the future if they want to make their own maps for Coterminus. This technically all could have happened in future releases, but I'm trying to add some level of polish for the first release since there's no way of knowing how long a second release would take.