" How nice of you to stop by here...But our princess is in another castle! "

Jun 17 2012 Rus[T] Blog
Check it out, a collection of the best mods here on ModDB around the years.
Modhof.com 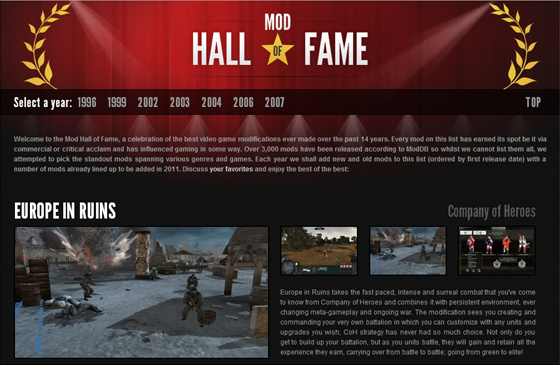 Welcome to the Mod Hall of Fame, a celebration of the best video game modifications ever made over the past 16 years. Every mod on this list has earned its spot be it via commercial or critical acclaim and has influenced gaming in some way. Over 3,000 mods have been released according to ModDB so whilst we cannot list them all, we attempted to pick the standout mods spanning various genres and games. Each year we shall add new and old mods to this list (ordered by first release date) with a number of mods already lined up to be added in 2013. Discuss your favorites and enjoy the best of the best.

For all fans of horror games. Those who wish to share your best horror experiences, connect news articles, share images, and find demo's.

In short: Indie Game Magazine is an independently owned, developer-centric, video game magazine. IGM strives to highlight the artists and community behind...

If you are a Android user, lover, developer... don't wait, join us!

Hey, fellow STALKER :D How are you?

Deam, I rarely check my profile. Why don't we get a notification when somebody post something on your profile :p? Don't want this site to change into "facecrap", but still..

I'm fine :D Would be nice to see some STALKER screens, you seem like a dedicated player! Also, welcome to the bar, hehe :)

Heh, I neglect the place a bit :p.. But a dedicated player I am :D!

HI why we are frineds now =D ?

Ah, you seems like a dedicated S.t.a.l.k.e.r. player, always nice to befriend those :D! And also the wait to LA is making me do this. Must..friend...everybody..aargh.... Also, digg your art :).