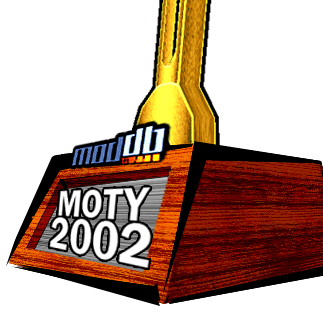 2002 is over, many games sites are throwing out the same old "games of the year feature"... NOT US! Being a mod site that just would not be our style, however seeing as we don't want to miss out on the action, we are doing a MASSIVE feature on the best mods of 2002!

After two months of accepting nonimations, bribes and attempting to ignore the crazy DBZ fans whose vote generally reads "our mod is teh b0mb - 1337 yeah!" we have choosen the best mods across the following categories *drum roll*:

With 2002 now behind us, it is time to look at the year that was 'modification style' and scope out what captured gamers imaginations, hearts and of course...

i never can play Natural Selection... because i haven't people that want play with me :(, appart... i want play this but the maps not work... i never can fix it T_T...
i stupid for can't play a great mod of the years :(

My moddb username is 7 years old. The almighty old Day of Defeat! I miss you so much!

Oh ****, I remember this. Natural Selection went so far, and is continuing with the next one.

Tags
Embed Buttons
Link to 2002 Mod of the Year Awards by selecting a button and using the embed code provided more...

2019 Indie of the Year Awards Event with 23 members