In this sixth dev diary we're finally in the home stretch as the title loading screen plus all units, technologies, base improvements are completed for the Civilization 2 - Red Alert 2 Siege of New York Scenario!

In this sixth dev diary we're finally in the home stretch as the title loading screen plus all units, technologies, base improvements are completed for the Civilization 2 - Red Alert 2 Siege of New York Scenario!

I'm pleased to say I have FINISHED all unit imports (along with stat balancing and costing), custom technologies, base improvement buildings and all theirs icons for the Red Alert 2 scenario! So how about I show you guys some of this recent work...

Firstly I've created a loading splash screen for the scenario based on the original Allied New York mission loading screen from Red Alert 2 but has some soviet stuff added to make it more general. 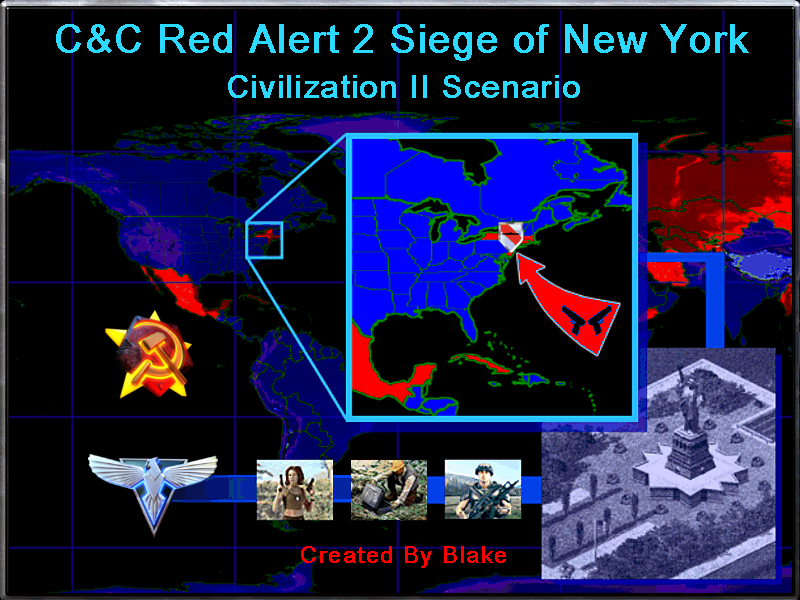 Next comes the big stuff! I'm finally at the stage where I think the scenario is good enough to make a picture to use in videos and other promotional materials, which those who've been following my work will know is the reason I needed to get this far before returning to finishing and releasing my other projects as I wanted to advertise each project while making videos of the others so I needed to make something good enough to use! It's a very nice feeling to know that all my scenarios are now in the final stages requiring only a bit of sound design and testing before being ready for release! :) Anyway this promotional shot will be often displayed as a thumbnail so to ensure items are clear and visible I've gone with a zoomed in shot that'll look a bit weird here in full screen HD but it will look great in smaller thumbnails. Because a zoomed in shot cuts off a lot of good content from the map I used the track enemy movement windows to show off other cool areas. You can see a lot of my finished units in this shot! :) 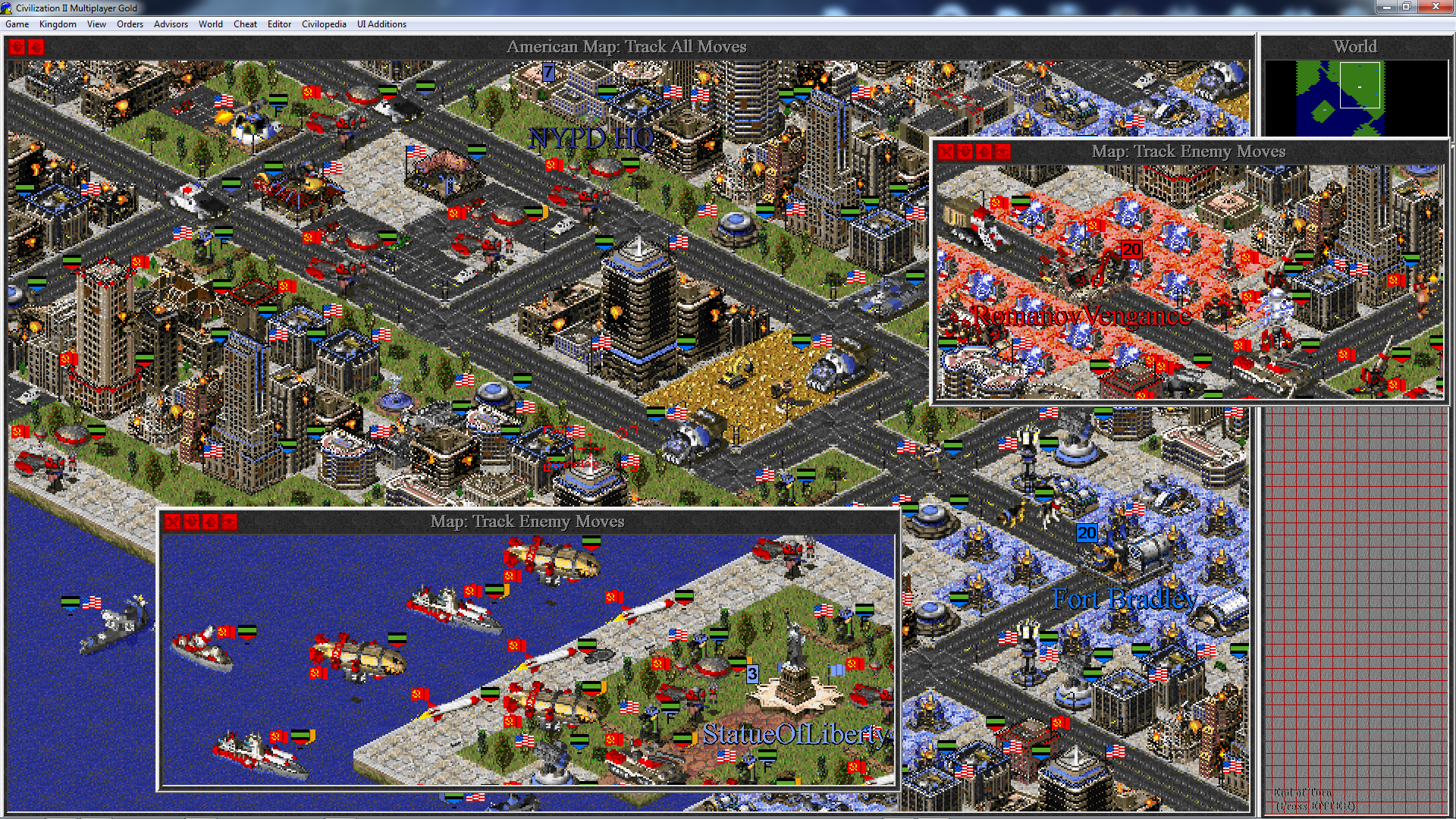 "Well that's annoying.. I want the zoomed out 1:1 shot!" you're thinking? Well alright lol.. Here's a nice zoomed out shot that shows a lot of the Soviet side of the map! As you can see I've also chosen a background for the city screen too. Those with a keen eye will spot some of the newly imported base improvement buildings and of course even more of the new units in this screen which I'll be showing next. 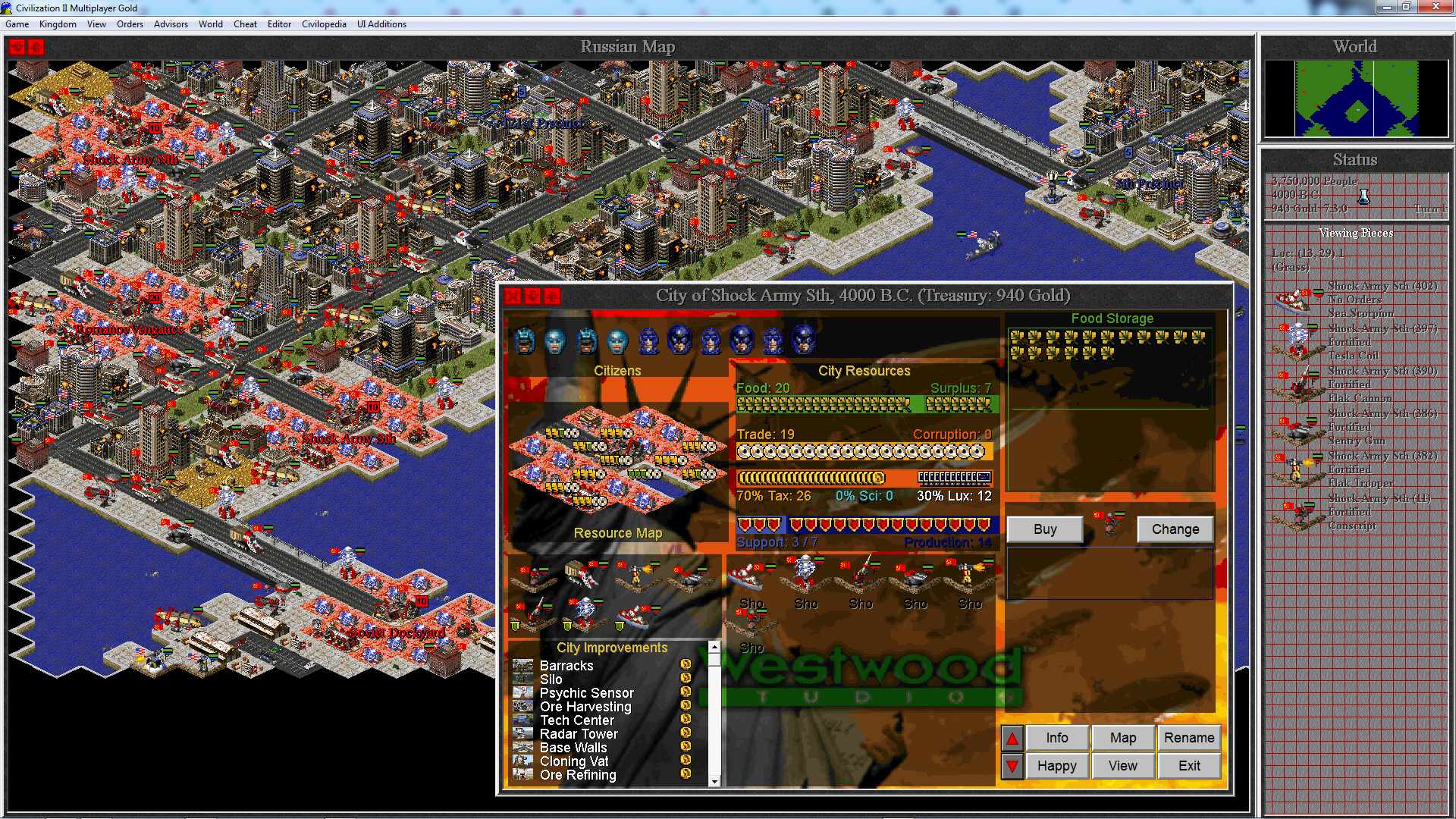 Below is the full imported unit line up for the scenario! All stats and abilities have been completed as well, which took ages as ensuring balancing but keeping faction uniqueness is not an easy thing lol! As for the graphics, well unlike the custom high res C&C assets that gave me no end of problems and converted pretty badly into my C&C Africa scenario these RA2 unit assets were actually very similarly sized to Civ2 ones so I was able to do nice 1:1 conversions of most of the units resulting in a better looking lineup. In cases where downsizing was required I did my best to make it as small a reduction as possible. Probably the only units that required a nasty 50% reduction were the Kirov, Aircraft Carrier and Dreadnought units but I changed their angle slightly to gain more room in the sprite cell ensuring as much detail was kept as possible. The Red Alert 2 colour palette also converted very easily into Civ2 MGE's limited one so all that was left to do was some recolouring of the team colours to make the red and blue more pronounced (so they stand out on a huge map). Just for fun I also stuck all the build icons/photos from RA2 plus a couple from some of the excellent RA2 fan mods out there (credited in image notes) into this picture and even made a few of my own (only seasoned RA2 players will probably spot the fakes though haha). 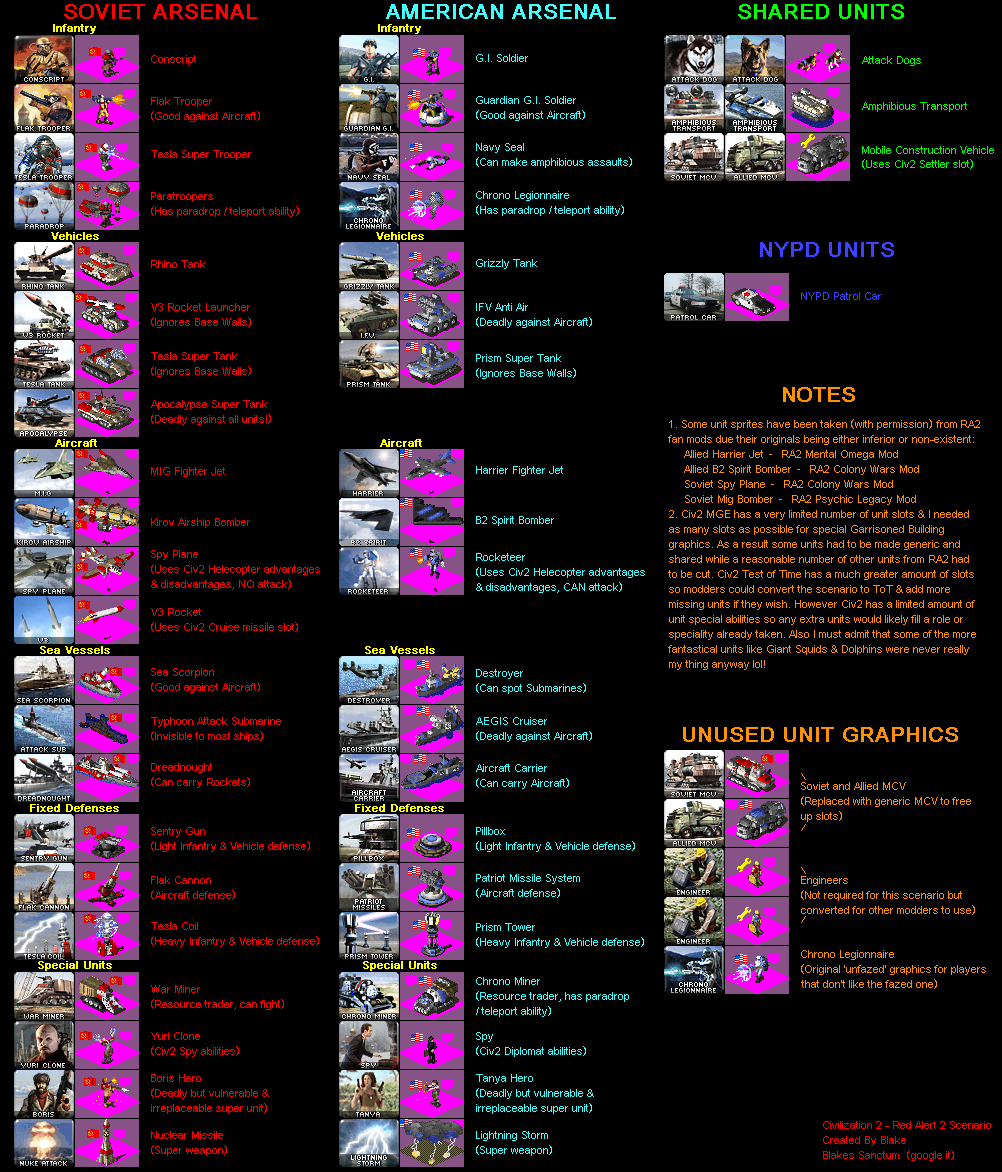 And to finish off I figured I'd post another nice promotional screenshot I intend to use around places. Here's a standard zoom 1:1 shot showing some of the allied side of the map which was heavily inspired by the original RA2 New York Mission map. 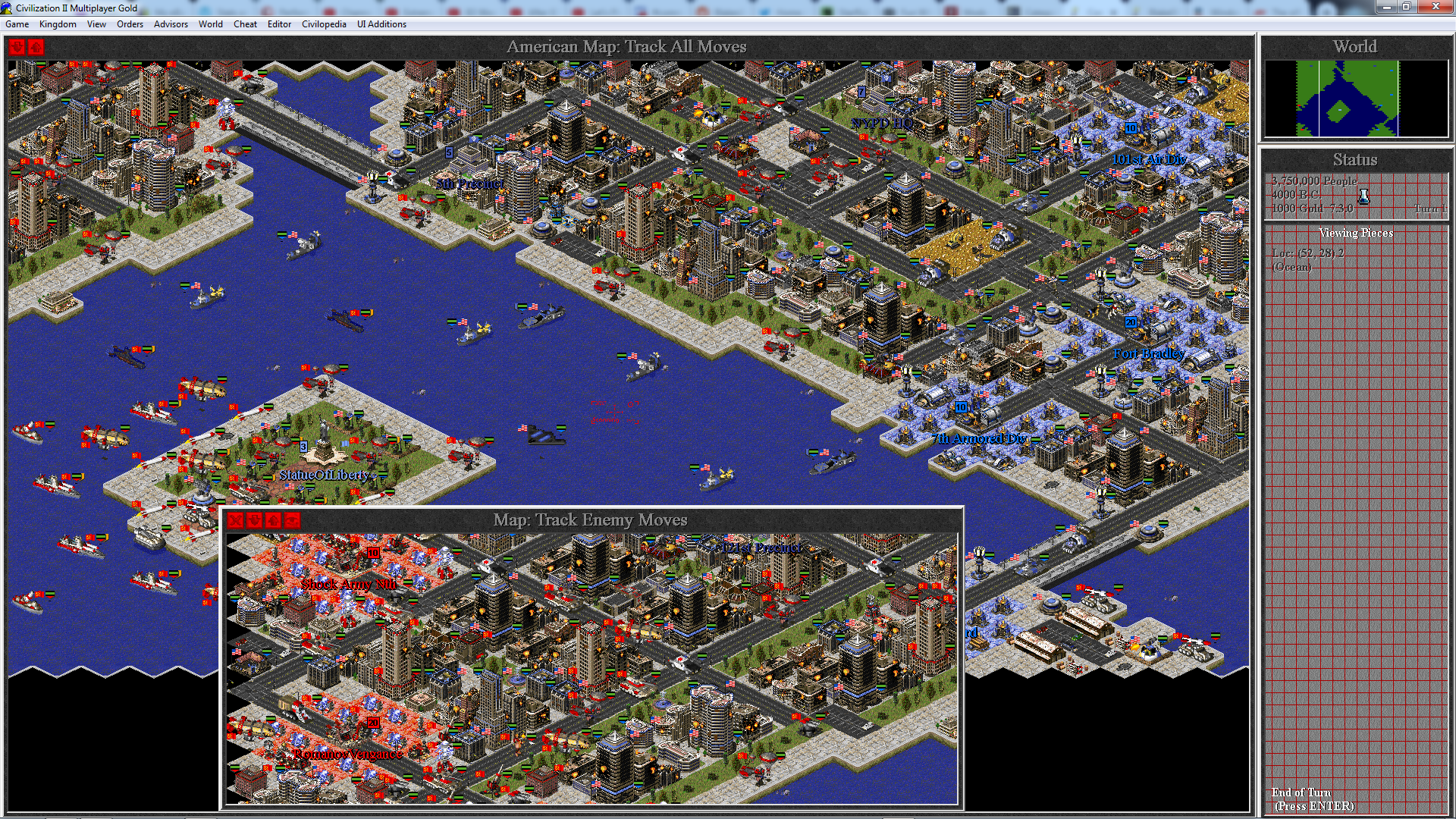