This is a small bonus project as I prepare to release my other bigger Civ2 mods to the world! I recently discovered John Valdez’s old mod and was massively impressed with the idea of making Civ2 look more like Civ1. I’d already been working on of a Test of Time graphics mod for Civilization 2 MGE (that nobody asked for lol) so I thought it would be fun to go the other way and ‘demake’ Civ2 to look even more like Civ1 than John had. All terrain, special resources, cities, terrain improvements, and units have been reimported from Civilization 1. 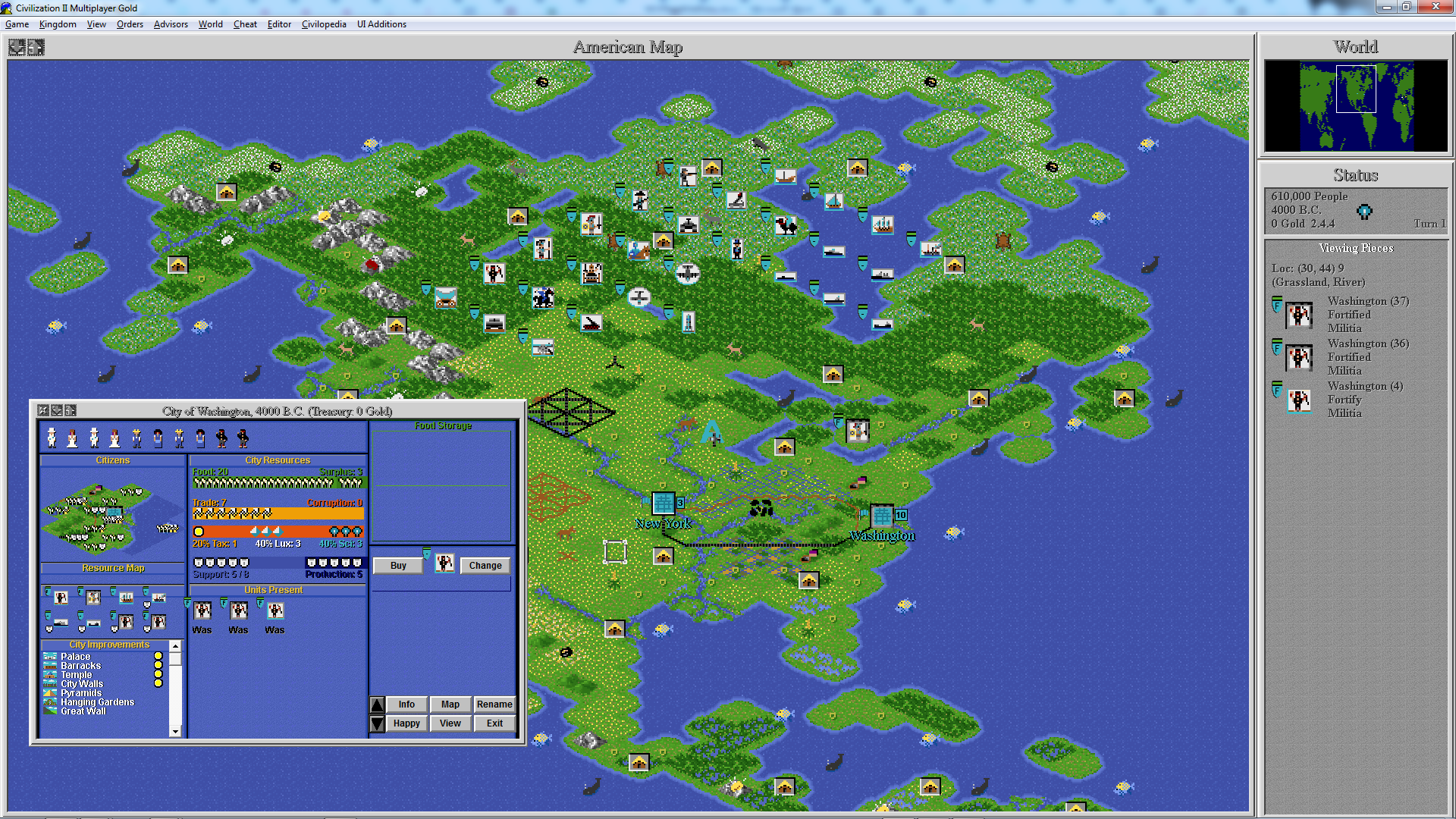 I recently (20 years too late lol) discovered John Valdez's Civilization 1 Graphics Modpack (which can be found 2/3 down on the CivFinatics Modpacks page) a total conversion mod for Civilization 2 that turns it into something like Civilization 1! It's a pretty cool & fun idea and I've already been working on of a Test of Time graphics mod for Civilization 2 MGE (also something that nobody asked for lol) so I thought it would be fun to go the other way and ‘demake' Civ2 to look even more like Civ1 than John had. Cause you know it's not like I don't have enough Civ2 mod projects to finish up already lol! 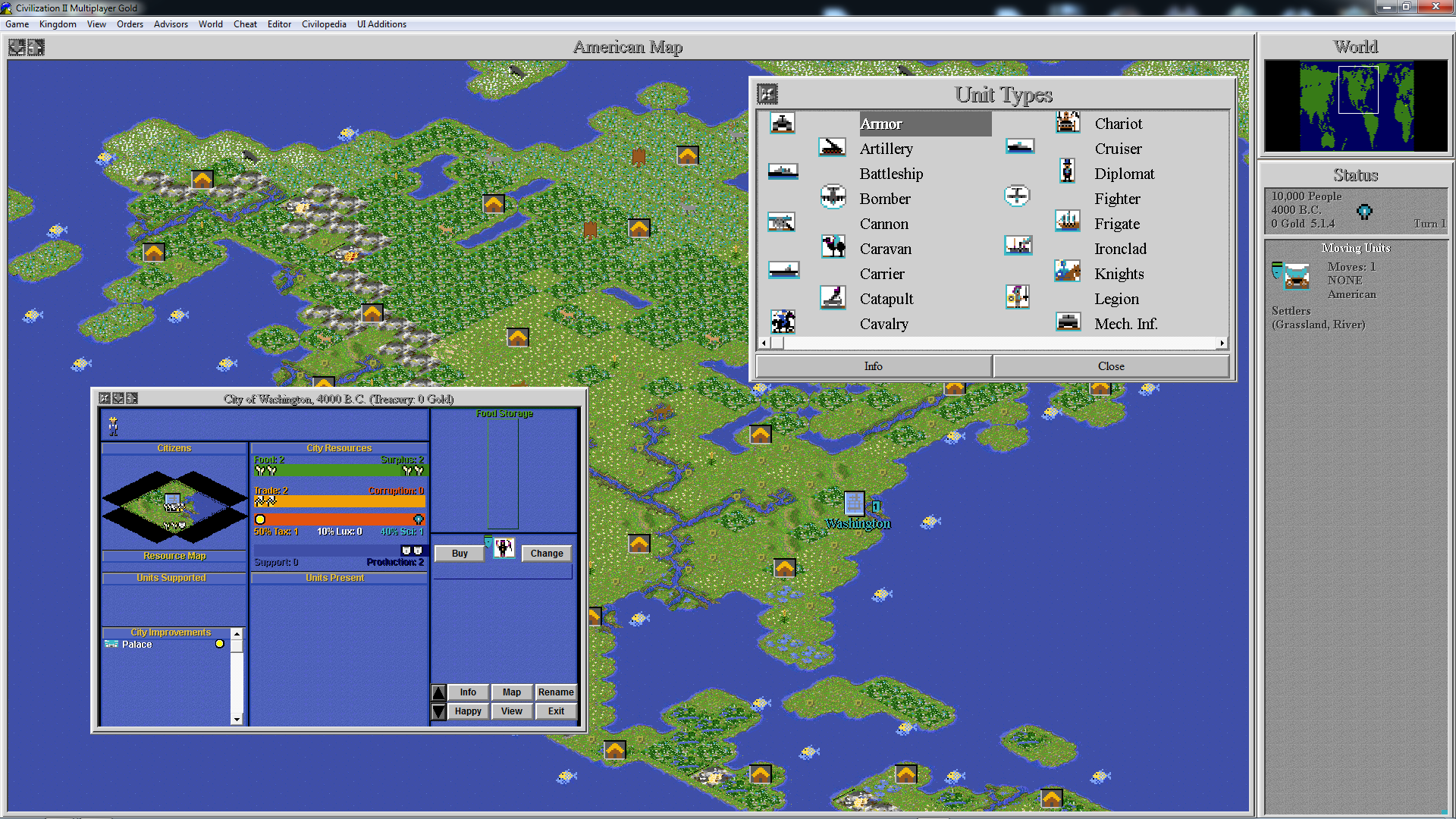 As you can see in the above screenshot John's work is pretty awesome however the OCD and modder part of me is finding all sorts of flaws in his work lol! For example a lot of his unit and city shield/size boxes are badly located and chopped off, even the city square itself is misshaped and misaligned resulting in clipping. There's also weird mix of high res assets where he sort of upscaled/redrew something from Civ1 and simple blown up (sometimes not evenly which results in a stretched look) low res Civ1 assets resulting in some areas looking blocky and others not. Upscaling all assets is too much work and wouldn't look as much like classic Civ1 anymore, but maybe making the high res stuff blockier would make it all match up better. His forests and jungles look weird too with lots of white stuff in them (I think it's because he accidentally used the transparent green your not supposed to use). I don't like the water either haha.. jeez I sound like I'm dumping all over John which I'm not, as I have HUGE respect for his talent. His name is all over the history of all the Civ sites due to his incredible total conversion mods, so friggin many of them too. So maybe this was one of his earlier projects before he became the guru everyone knew him to be, and I can see from his readme that he had a lot of troubles and nightmares with the conversion (eg palette differences and a dead copy of Civ1 he couldn't startup). However there's so much good stuff here, eg I LOVE his city screen background, I love how he's put in all the old resource icons and building pics, and the slightly retro GUI changes. It just needs some polishing which I'll have a go at (as it would be good practice for my Master of Magic Civ2 ToT scenario remaster retro graphics 2D to 2.5D conversion plans). 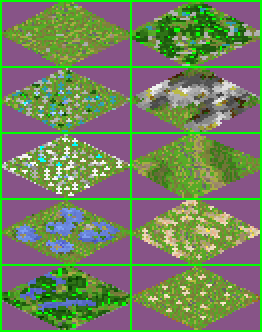 For a hybrid mod Johns work is pretty cool as on closer inspection his upscaled Civ1 terrains are quite nice (eg he painstakingly drew grass and flowers etc). It's just the forests, hills and mountains that don't look good as I suspect John did some sort of 45 degree rotation with vertical squishing to convert the 2D Civ1 assets into the 2.5D Civ2 assets with those 3 terrain types and so they look completely squashed flat like a Super Nintendo Mode 7 world lol. Yes I could just fix them and leave eveything else however I thought it would be fun to something different to a upscaled hybrid and instead go 'full authentic retro' or at least as much as possible. So using JCivEd (a popular and modern Civ1 map editor) I created a custom Civ1 map to create lots of terrain formations, took screenshots and then cut those bits out of the screenshots, doubled their pixel size and then used a Civ2 terrain diamond cell 'cutout' to take what I wanted. Then I'd do a few touch ups to make it fit and look better. 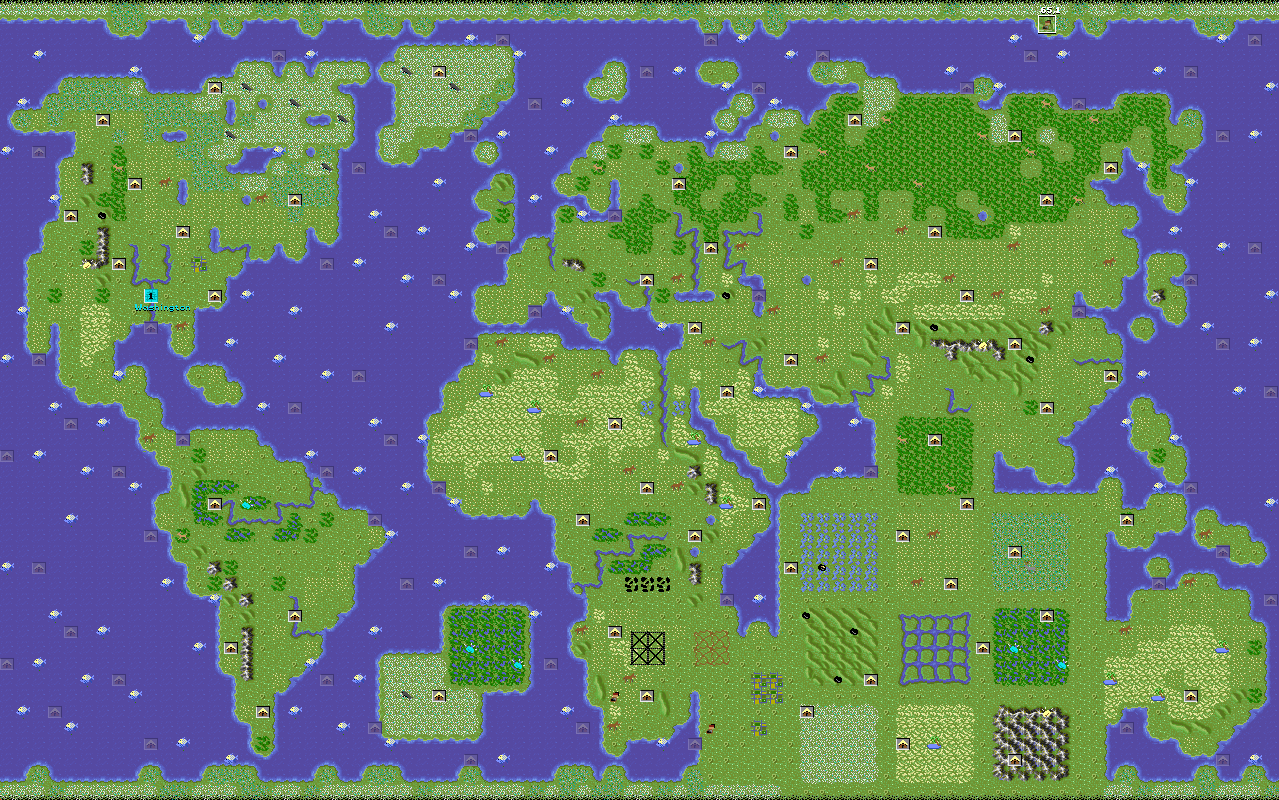 Just as John talks about in his readme I had a LOT of colour issues as all those greens and yellows in Civ1 are not in the Civ2 palette so I had to try and pick the nearest Civ2 equivalents which are probably a bit too strong but its either that or too bland lol. Going double size on everything means the terrain matches the resolution of the special resource icons now plus it gives a nice retro oldschool Civ1 DOS look.

Not many have done double sized assets in Civ2 before so I had no guides to go by and had to experiment endlessly as obviously diamond edges are not blocky double sized and neither is the raster making the terrain not join together very well. In the end even a 2x blocky raster didn't go well so I removed the raster all together as thankfully all Civ1 terrain is very green and has green edges that blend together quite well mostly removing the need for a raster (although deserts could use more work). I made sure the imported forests and jungles were nice and 'fluffy' with branches coming out over the top of the diamond to make them more 3D and get rid of the squashed flat look. As for rivers, hills, mountains and shorelines, to avoid the problems John had I simply grabbed Civ2's equivalents that looked most like Civ1's versions, I then downsized them to 50% and the put them back up to 100% again to deliberately make them more blockier to match the Civ1 assets. I then recoloured them to match Civ1 assets even more (eg green hills). As always shorelines were a bloody nightmare.. especially when you make them blockier haha. I reimported all special resources at 2x (as John's were unevenly stretched too) and then changed all the remaining Civ2 ones (Civ2 has twice as many as Civ1) to either use modified versions of Civ1 special resources (eg Ore & silk variants of gold & gems) or I created low colour blocky retro versions of Civ2 special resources (eg Whales, Wheat & Fur). I've also imported 2x sized city square sprites which look better then the weird unevenly stretched ones in Johns original. This was all quite a bit of work but as you can see below the results speak for themselves! 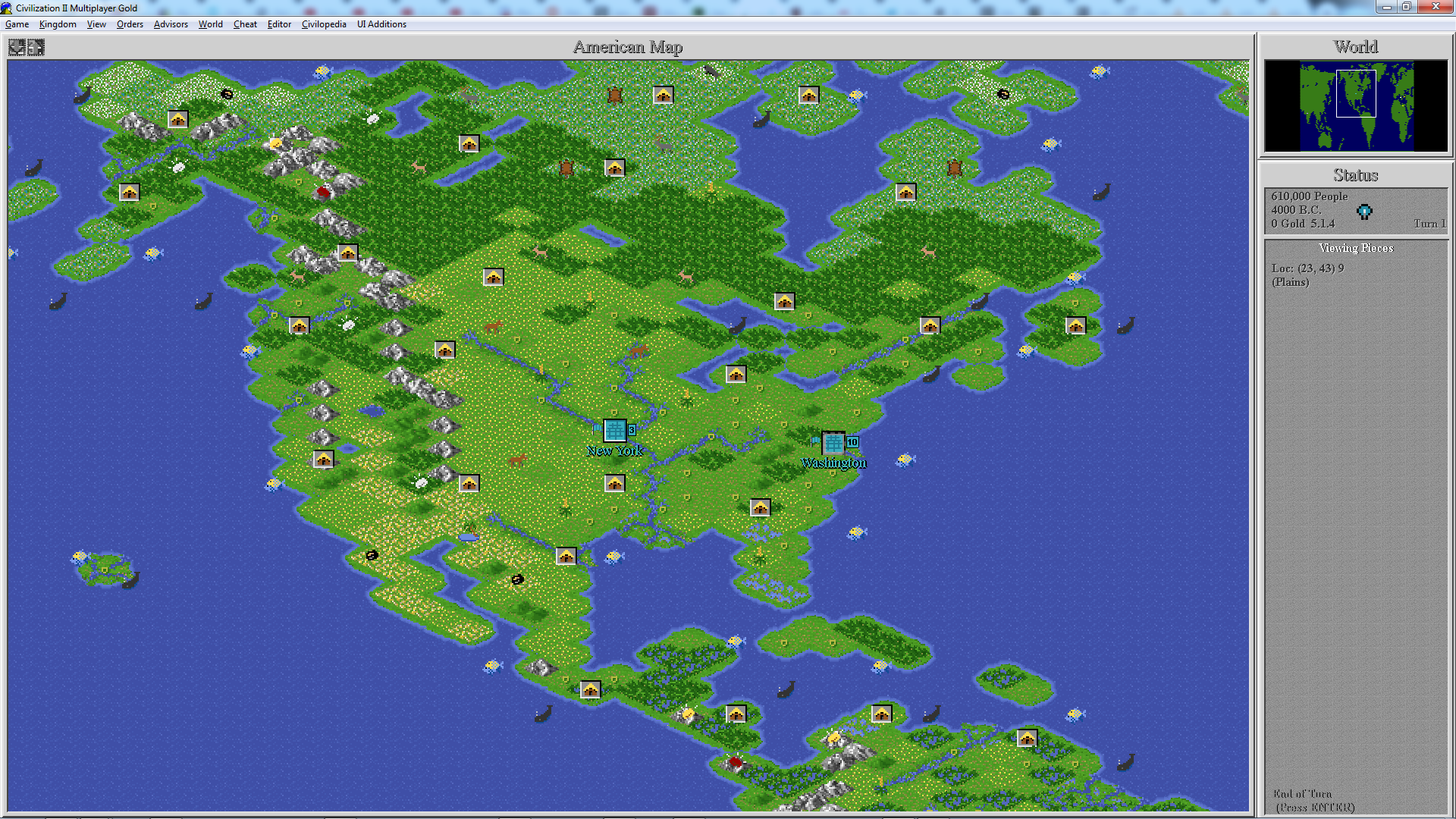 Test shot of my completed terrain conversion in Civilization 2!

Now that terrain (and arguably the hardest part) was done I decided to look next at settler/worker terrain improvements: 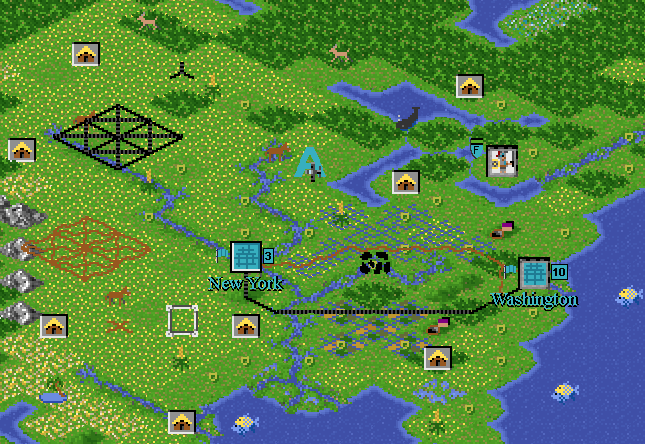 Cities colours are an issue in John's mod as there's only 4 types in Civ2 plus the industrial and modern city types. John had everyone getting a regular Civ2 style city at the end but I wanted to stick with Civ1 stuff.

I made the industrial slot white and the modern slot grey as those are nice neutral colours, so when everyone ends up with grey cities in the late game it won't be all that different from the usual grey Civ2 modern cities lol. For example here's an old save I used with Johns mod where all the modern cities are grey (gameplay wise his mod is not compatible with regular Civ2 game saves for due to all the units, buildings and techs that are locked out/invisible but regular saves are still useful for some of my graphic tests!). 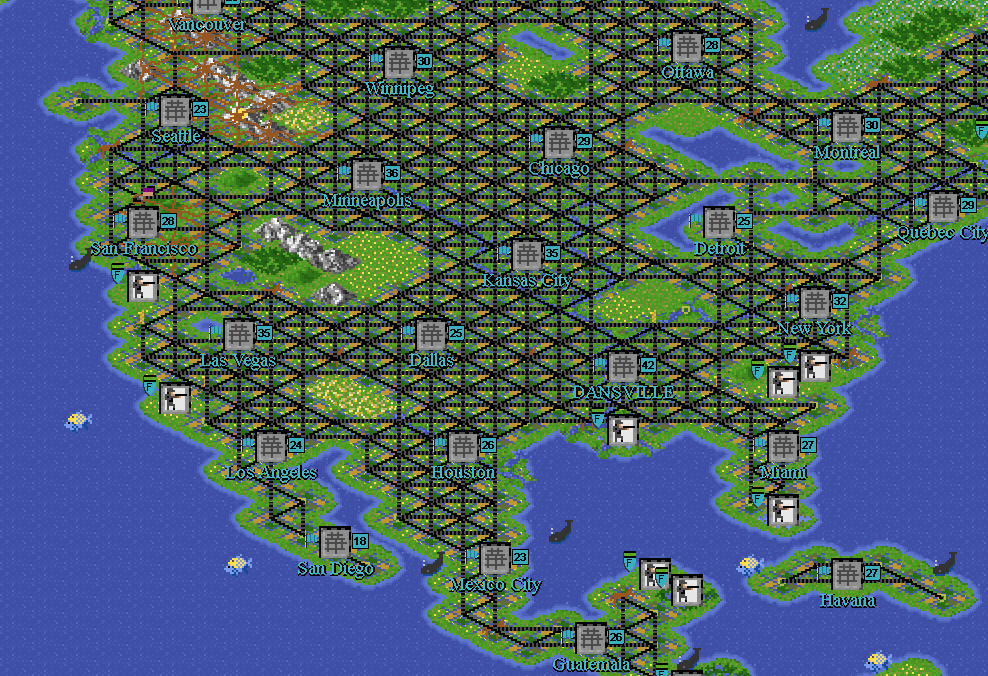 Experiment showing a modern/late game civilization combined with the modpack

As for my final changes I've re-imported all units at true 2x size to match everything else I've done which is still smaller than Johns stretched units meaning they fit quite nicely into the diamond and no more then say 10% of the larger units goes into the upper diamond area which should mean no more unit movement confusion reported by some people. As you can see in the screenshot below I also perfectly positioned each one to appear inside the grey fortification mode (eg like the Legion above Washington) and the white fortress (eg the one below New York) just like (if not better than) the original Civ1 haha.

Well that's pretty much everything. All that's left to do is make some tiny adjustments to Johns rules files and this mod should be ready for release soon (20 years too late when nobody cares haha). Stayed tuned!

It's never too late mate, keep it up!

Caveman2Cosmos Civilization IV: Beyond the Sword