Xim's Star Wars Doom admit-ably features a lot of enemies, all done with random spawners replacing the vanilla Doom monsters. This is still done with an attempt to keep a balance and a somewhat consistent theme. Also, as mentioned in the main description of the mod, most enemies will not infight with each other unless they are on a different team, for example a stormtrooper won't infight with an imperial officer but they will infight with a gammorean guard.

This article will give a description on the enemies featured in the mod, listed by how they spawn in Doom.

-Officer: Armed with a heavy pistol. Can't be mind tricked.

-Officer: Armed with a heavy pistol. Can't be mind tricked.

-Imperial Medic: Infantryman that can heal his fallen allies. Make sure to take these guys out quickly!

-Gamorrean: Bulky pig like aliens armed with an axe that ignores shields.

-Young Kell Dragon: Smaller, weaker but much faster than their larger counterparts.

-Mynock: Flying creatures that may come in a swarm. They drain your health and shields.

-Dianoga: Creatures that live in shallow waters. They can only be hit when they come up from the surface. Appears when demons are on water.

-Dark Trooper Phase 1: A security droid armed with a vibrosword and a blaster proof shield. Weak to ion guns.

-Sith Reborn: Imperial officers brainwashed by the dark side. Attacks with a lightsaber and force push.

-Dianoga: Creatures that live in shallow waters. They can only be hit when they come up from the surface. Appears when spectres are on water.

-Dark Eye Droid: The DRK-1 probe droid. They are agile, but can't take many hits. Weak to ion guns.

-Trandoshan: Lizard like aliens armed with either a concussion rifle, rocket launcher or scattergun.

-Rodian: Remember Greedo? Shoot these guys first, before they get you with either their heavy pistol, detonators or sniper rifle.

-Kubaz: Watch out for these sneaky aliens. They cloak when not attacking with their sonic rifle, they can also drop land mines around so be careful if you hear their buzzing voices.

-Wookie Madclaw: Evil wookies that have taken up bounty hunter work. Armed with a bowcaster.

-IG Assassin Droid: Tall menacing droids armed with dual auto blasters and thermal detonators. May initiate a dangerous self destruct sequence on their death, so watch out for their warning after defeating them. Weak to ion guns.

-Gand: A rare enemy. A small insect like alien armed with a disruptor rifle.

-Boba Fett: One of the “boss enemies” in the game. Armed with various weaponry, be careful!

-Royal Guard: Elite guard of the empire. Armed with an electro-pole.

-Shadow Trooper: Stormtroopers with a stealth generator, armed with either a rifle or repeater.

-Jet Trooper: Stormtroopers with jetpacks that throw recon droids. Armed with either a sonic rifle, flamethrower or flechette launcher.

-Inquisitor: Jedi who fell to the dark side and joined the empire, attacks with a lightsaber and force lightning. Can also revive their fallen allies.

-Inquisitor Jerec: One of the “boss enemies” in the game. A renowned inquisitor who became one of the leaders of the Imperial Remnant.

-Darth Vader: One of the “boss enemies” in the game. The most famous villain in Star Wars. Enjoy doing battle with him!

-Dwarf Spider Droid: Once used by the CIS during the clone wars, they have been recommissioned for the Galactic Empire to enforce the submission of former Separatist worlds. Armed with either an auto blaster or beam cannon, with rare ones that have a cryo projector gun. Weak to ion blasts.

-Zero Gravity Trooper: Troopers with heavy armor that are somewhat resistant to normal blaster fire. They are armed with a mini-missile launcher. Bust out the medium to big guns for these guys.

Baron Of Hell replaced with: 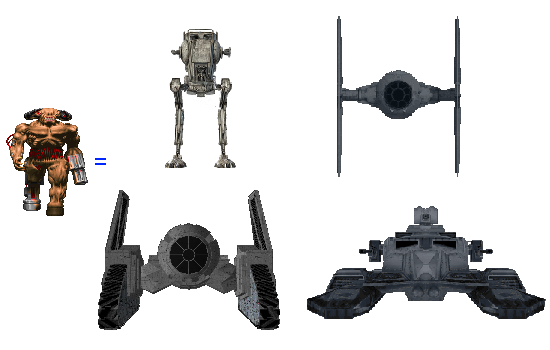 -AT-ST: All terrain scout transport. Fires a barrage of lasers and missiles.

-TIE Mauler: TIE Fighters made for land. Armed with an auto turbolaser.

Icon of Sin replaced with:

-Emperor Palpatine: The final challenge in most map packs. The Emperor functions more like a classic enemy instead of a random enemy spawner like it's vanilla counterpart. He floats around on his hover chair and uses various forms of force lightning that increase in intensity the more damage he takes. After defeating him your mission is complete.

Extra Enemies: There are a few enemies that don't spawn normally in game. Some of them are included in compatibility patches for certain map packs.

Remote Droid: Small droids often used for training, but can be effect in battle due to their high mobility and small size. Deployed by Jumpjet Stormtroopers.

Shore Trooper: Stormtroopers trained and geared for tropical combat. May appears in shallow waters. Armed with either an E-11 or Repeater Gun. (Spawn name: Shoretrooper)

Jabba The Hutt: The most famous leader of the criminal underground. He is a stationary enemy that throws barrages of grenades. (Spawn name: Jabba)

Rancor: A giant omnivorous monster, around the size of an AT-ST, with nasty melee attacks. It's thick hide is protective against typical blasters. If you don't have any heavy weapons you might want to find another way to combat it. (Spawn name: Rancor)

This is awesome!! Great work never seen this mod before :D

You think you could make enemy lists of the scum&villiany and Rebel scum addons?