This is a mod for GZDoom the replaces all weapons, enemies and items with Star Wars themed assets. Gameplay is changed quite a lot, there aren't any hitscan attacks but projectiles typically move quite fast. Most projectiles are 3d models of Star Wars blaster effects. Infighting is also rare and usually only happens between imperials, aliens and bounty hunters (they won't attack their own team). The Icon of Sin is also replaced with a more traditional boss enemy, Emperor Palpatine. This new version also includes the ability for the player to learn force powers. 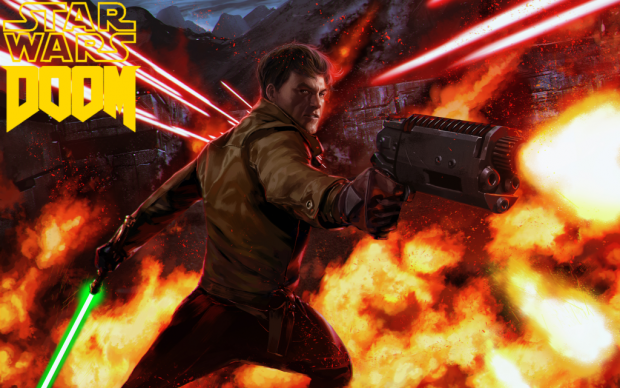 Loading the mod with Zandronum, and GZDoom didn't work. Help?

This mod is not compatible with Zandronum unfortunately. Not sure if I'd be able to make it work with it because Zandronum uses an outdated version of DECORATE coding.

Older versions of GZDoom probably won't work either. Did you update GZDoom before running the mod? Let me know if that's the problem or not.

Got it! Thank you. I forget to update GZDoom when I run into issues. Appreciate the help!

Thoroughly enjoyed this. Keep up the great work!

Can you add friendly npc like rebel soldiers wearing their blue and black pattern like at the beginning of new hope movie. Thank you.

There is an item that spawns with the invisibility sphere called the HyperSpace transponder. It mostly uses the code from Strife, but it summons the friendly rebel troopers you speak of.

10/10/19
-New logo and title screen, featuring our hero: Kyle Katarn! (picture found at HDwallpapers)
-New upgrade weapon: Disruptor rifle upgrade from sniper rifle, twice the power for primary fire and you can charge with alt-fire for a more powerful blast
-Sniper rifle alt-fire damage redone; start of the beam is stronger than end of beam, but it is less overpowered overall
-Elite rifle now functions more like a stronger E-11 than a weaker EE-3
-Fixed a bug where the heavy pistol didn't use ammo when doing alt-fire with the scope
-Fixed a bug where switching between upgraded weapons gave the player ammo
-Fixed a few glitchy death/pain animations for some enemy sprites

Wow. Great job, love it and thank you.

I do wish there were console commands that give you all the force powers, because I tried give all it didn't work. My reasoning why I want this?
Sometimes you just wanna relax and be a jedi out of the getgo

Try "give unlockforce 3", that should automatically give you all force powers. You can also summon "chainsaw" or "LightsaberSpawner" a few times too.

1/13/20
-New enemy: Incinerator trooper, first featured in the game "Force Unleashed" before being introduced to offical SW cannon. They are armed with flamethrowers and spawn rarely with the Hellknights
-New "secret" weapon: Rebel Trooper A280 Blaster Rifle, stronger and more accuarate than the Stormtrooper rifle, but has a slower rate of fire. Alt-fire does a burst-attack. They can only be obtained if they are dropped by a Rebel Captain spawned by the Hyperspace Transponder (or Summon AssaultBlaster in console)
-SNIPER TAPPING : Bryar pistol, e-11 blaster rifle and imperial repeater have perfect accuracy on their first shot much like Doom's pistol and chaingun
-Fusion cutter and Goob gun are more powerful and accurate, they also now use plasma cells for ammo. Fusion cutter now spawns with the the Plasmarifle along with the Oppressor flamethrower
-Concussion rifle is overall more powerful, it now has a railgun alt-fire similar to Dark Forces 2. It now spawns with the BFG9000 along with the Dark Trooper cannon
-Replaced Z-6 Rotary blaster sprite from the Doom '16 edit. Now it has a sprite edited from a screengrab of the Z-6 from Battlefront II '05, featuring a shoulder mount animation for (de)selecting
-Z-6 Rotary blaster is a bit more accurate
-Dark Trooper Assault Cannon now has a shoulder mount animation for (de)selecting
-Hyperspace Transponder can now summon light side jedi, armed with a blue, green or yellow lightsaber and behave similar to the dark jedi, minus the force lightning
-Imperial Generals have a rare chance to drop a Hyperspace Transponder on defeat
-Imperial Admirals have a rare chance to drop a Heavy Support Beacon on defeat
-Ion barrels now have brightmaps
-Minor updates for the Darkest Hour and Doomed Space Wars compat patches

Yo Ximmerman, any chance you can release the full console command list that are in the mod, buddy?