TFS revamps the entire pace of the game and its combat aspects while introducing new content, ship classes and unit subclasses, updating the entire ship roster and tech tree in the process. Recurring themes are quasi-modern (circa 20th century) air and naval doctrines modified for three-dimensional movement complete with a proper unit classification system. Grand strategy plays a significant role, but the emphasis is placed on battlefield adaptability simulated by a large amount of assets available to the player. TFS takes a combined arms approach - there are no individual "uber" units as found in most RTS games. Even the largest capital ships will fall prey to opposing forces in short order if not managed correctly and utilized in conjunction with other units.

Thanks for voting and helping Tactical Fleet Simulator on it's quest to become the 2022 Mod of the Year. You are now in with a chance to score some free games from our #modlove collection. Help this mod secure more votes by embedding the widget (or link) we have included below on your favorite sites. 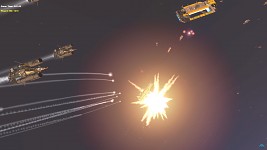 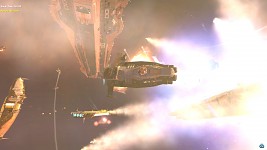 Two updates for TFS v2.8 are planned, the first of which will involve polishing and the implementation of new ship HODs. The second update will focus...

Dedicated Network for TFS on Tunngle

Tactical Fleet Simulator (TFS) was designed to be played against human opponents in online game matches.

TFS v2.8.2 Full Release. UPDATE: Campaign levels should load properly in this release. To use the new Hiigaran cruisers, use the EB&R Game mode. List...

I hope that during making this mod you have contacted with my best Tacitians for an advice, right?

I keep having an issue where the main menu says TFS at the top and the AI selection menu has all the correct settings, but when i start a battle, none of the tfs ships are even visible in the build menu.

Also, only the standard deathmatch mode is available

Hi Battlecry I got my last issue resolved with the screen resolution being wrong thanks for the good advice. Hate to bother you with another question but I have been going nuts trying to figure out how to change my RUs in player against CPU on the homeworld 2 both the original and the new steam version, I have tried using the Cheatsunlimited program and it says trainer activated but it changes nothing in the game I tried using the cheat machine 6.7 but after scanning twice it returns a blank same with Cosmos it won't even run, any suggestions on changing the RUs in Player vs CPU? Thanks for your time.

There is a game mode called "TFS v2.9 Enhanced" that has more starting RU options than the standard deathmatch game mode.

Newbie to modding but I can follow specific directions, finally got the steam version of Tactical Fleet Simulator working but it will not go to full screen and the bottom part is not accessible so I cannot click on it to go into the game, I tried all the suggestions in the info text but nothing I have tried works, any other suggestions? Thanks in advance.

Navigate to your "x:\Program Files (x86)\Steam\steamapps\common\Homeworld\Homeworld2Classic\Bin\Profiles\Profile1" directory and open the file called "PlayerCFG.lua" in notepad. Change the values for screenResolutionW and screenResolutionH to your monitors native resolution. This should resolve any scaling issues you are experiencing due to using an incorrect display resolution.

oh wow I was going to replay this mod today, and suddenly theres a new update. crazy

What error is your log file reporting after the game crashes?

Thanks. It is referencing an old subsystem that was removed at some point; try restarting the campaign from scratch without using any old save files as those wont work because the past few versions of the mod changed the names of various files and purged redundant ones.

Weird, because I clicked Reset and started from the beginning.

I also made a new profile after it was crashing.

And I unsubscribed and resubscribed.

The issue was with a single player unit (the Hiigaran Escort Carrier) calling the old subsystem file. I have fixed the issue and updated TFS on the Steam workshop.

TOO AWESOME FOR A PROPER REVIEW