PR:Z is a Project Reality (BF2) mini-mod that focuses on surviving in an apocalyptic scenario.

It is the further development of the SGE mini-mod which was created to organize Survival Games Events following the concept of the Hunger Games movie. These type of events were first organized for the DayZ mod (Arma II) and it was our objective to bring a similar experience to PR. With the first versions of the SGE, we were able to organize two successful events without zombies and then a third with zombie bots. These served as tests for the game dynamics that would be later improved for PR:Z. The PR:Z mini-mod is being developed by members of the PR community and has been in development for a bit more than one year.

The feedback received from the participants of the Survival Games Events was very positive as some even stated that those had been the most thrilling events that they ever played in. From that point on, other PR communities decided to follow in our footsteps and organize one life events.

One of the common thoughts when looking into the PR:Z concept is that zombies do not fit into a Reality based mod. But since zombies are a "fictional" thing, their definition is open to changes and adaptations. Instead of carnivorous undead, the "zombies" are simply humans that have been infected with a disease which vastly degrades the brain functionality. Its main symptoms would be the increased aggressive behavior and the decreased intelligence as well as a very low pain sensitivity. A not far stretched concept if we take a close look into real diseases.

PR:Z will focus mostly on player survival and humanity, requiring a certain level of interaction and teamwork between survivors in order to stay alive. The zombies are added not only as a distraction and extra opposition, but also as an alternative game-play option since you will eventually play as zombie too. If a zombie kills you, you will become a zombie (for 20 minutes max). 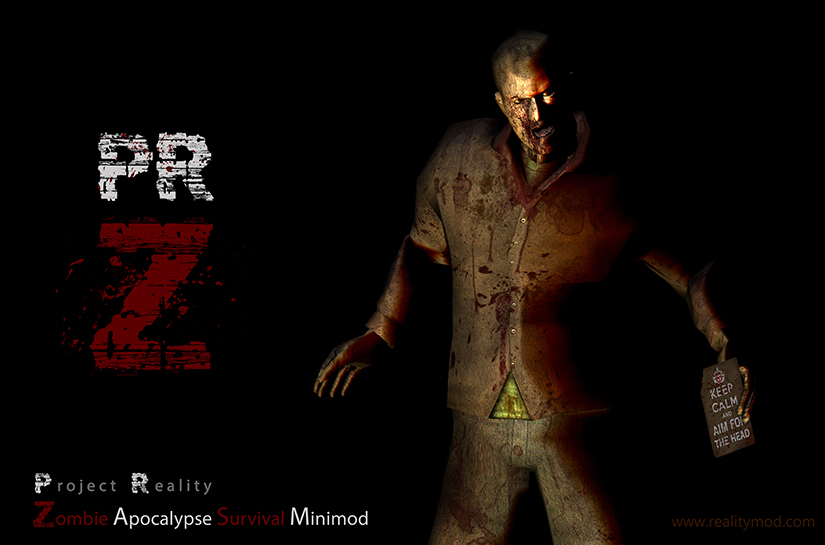 The Survival "game-mode" offers the most basic type of game-play where survivors randomly spawn (unarmed) in the edges of the map and have to look for gear and weapons in order to survive against other survivors and quite a lot of zombies. The loot is spawned randomly all over the map, in groups of weapons based on their importance/effectiveness, with different amounts and spawn times.

The humanity system forces you to not shoot on sight, as the amount of "team kills" will cause a team-switch when reaching high values. Shooting unarmed survivors will triple the probability of getting team-switched to the zombie team. Killing zombies and teamwork with other survivors will allow you to lower your TK count to avoid becoming a zombie.

You can find more info on the Survival "Game-mode" here

There will be other "game-modes" and some of them will have no zombies, for the ones who dislike the cliche. Those will be survivors versus survivors meaning team versus team (No Team Killing). Currently we have two "game-modes" planned:

Rivalry is based on the Project Reality CnC game-mode where you are required to build bases and destroy the enemy ones. While in PR you need the logistics to be able to build your base, in Rivalry we will have pre-defined locations for you to build in. You won't need "logistics" but you will need to find a shovel and a radio in order to build your base as well as a dynamite kit in order to destroy enemy bases. And due to the low amount of ammunition and medic supplies, you will need Scavenger Squads to look for loot and resupply the defensive units, else you will loose.

Supply Run is a objective based "game-mode" in which one team needs to capture a few flags to simulate the resupply of a fuel tank truck and return the vehicle to base, while the other team needs to destroy or steal the vehicle. If the vehicle is destroyed, all flags become neutral once again and the vehicle will respawn in base. If the vehicle is stolen and taken to the enemy base, that team will win the round. Both teams will need to find good loot in order to either protect or ambush the truck. It is a unbalanced type of game-play which will require some testing to make it fun for both teams.

These and other game-modes/features will be added in the future if we get a good player-base.

You need to have Battlefield 2 game with the 1.5 patch installed as well as the Project Reality 1.0 mod installed before you can install/play this minimod. You can get PR at RealityMod.com

We are in need of a 3p Animator and a Sound Effects developer. If you're interested in helping out, contact Onil.

PR:Z Live Stream - Sneak Peak - Q&A - Tips & Secrets - @ Twitch.tv - Click Follow on my channel so that you are notified whenever I'm streaming PR:Z

Thanks for voting and helping Project Reality: Zombie Apocalypse Survival on it's quest to become the 2022 Mod of the Year. You are now in with a chance to score some free games from our #modlove collection. Help this mod secure more votes by embedding the widget (or link) we have included below on your favorite sites.

The PR:Z Open Beta Week will start on the 1st of February and end on the 8th of February. The server will be available 24/7 but you will only be able to play the minimod from 18h30 to 02h30 GMT/PR-Time as it requires an admin to be present and activate the loot spawns.

PR:Z Open Beta Week is Over. Keep and eye on this page for news on the next one.

You should take your time to read the Survival "Game-mode" Set of Rules as well as the Frequently Asked Questions. Keep in mind that this is a Open Beta Test which means that it is still a WIP version of the minimod!

You can also check our main thread on the PR Forum Modding Section, it has plenty of information and feedback related to past events. Including a few videos of both Survival Games and PR:Z.

The download link will be posted here this Saturday, with clear instructions on how to install the minimod using our Control Panel and also how to install it manually (for the ones with screwed-up OS permissions).

Download the PR:Z Control Panel and place it inside your battlefield2/mods/pr folder. Unzip it and run the PRZControlPanel as ADMIN to be able to download and install the minimod.

(You might get a request to update your .NetFramework if your version is older than 4.0. The CP won't work without it. If the CP shows an "Uninstall" option it means you have a old version of the minimod. Click Uninstall, it should remove it for you.)

IF the above installation process does not work, you have two other options:
- Downloading the minimod content (Link provided upon request), changing the name of the zip file to minimodPrZ.zip and dragging it into the CP. It should ask you if you want to install the minimod.
- The other option is unzipping it inside the PR folder, all files/folders should go into their correct place automatically. If you can't unzip it inside, do it outside and drag everything into the PR folder. Careful not to drag it into other folders inside the PR folder! In either case, you will always need the CP inside the PR folder to run it and enable/disable the minimod


Download the PR:Z Minimod >>>, Enable it & come give it a try! Keep in mind that this is a BETA, meaning that it is still WIP and might contain bugs. Server Loot will only be spawned at 18h30 PR Time when the Open Beta starts. So if you join the server sooner, there wont be any weapons!

DO NOT FORGET TO DISABLE THE MINIMOD BEFORE ATTEMPTING TO PLAY NORMAL PR!!!

This minimod does not alter your original PR so you can continue to play it as long as you disable the minimod in the CP (Similar to how the Anders Sound Mod worked).

The PR:Z server has been kindly provided by the [3dAC] clan which has supported this project from the start. You can find the server by clicking Co-operative and searching within the short list of servers. The server password is PRZ . The server only has 32 slots because it is a 2km map and we believe its better for game-play. We might increase the slot number in the future depending on how the open beta goes.

If you have any questions, feel free to post them here. Same applies to feedback on the minimod and it's features.

Hope to see plenty of you as Survivors or Zombies during the Open Beta. ;)

PR:Z Live Stream - Sneak Peak - Q&A - Tips & Secrets - @ Twitch.tv - Click Follow on my channel so that you are notified whenever I'm streaming PR:Z

PR:Z list of Frequently Asked Questions and their answers. It will be updated regularly based on the feedback we receive.

This is a detailed description of the PR:Z Survival "Gamemode" and its features.

Also, what limits the mod to DEV HOSTED servers? Is it the weapons spawn system or something else? I really don't see why this sort of mod needs such complicated mechanics since weapons spawning and even spawning on random locations works on the battlefield engine on local with no need for an ADMIN.

Local hosting requires our python code which we do not wish to share as communities would organize events with it without our approval.

Not only that but the minimod was never planned to be played alone on "single-player".

If the minimod is ever completed and has regular events, there will be some organized on US servers. However, we don't have the man-power to do that at this moment.

Onil, you should really add local server support. The mini mod is amazing but the limits on who and how the game can be host really makes it very hard to be played on a large scale. Me for example live in south america and we need local servers to have playable pings.

Not Dead and currently being developed again.

Has the mod been discontinued?