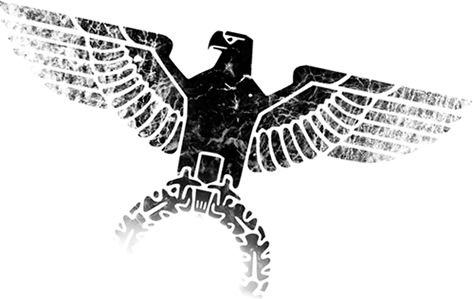 1964 is a mod which covers the timespan of an alternate-history era of 1964 to 2012. Following the disastrous events of World War II (which ended in Allied defeat in 1953), the world has split into three factions.

The Axis Alliance: a Fascist alliance that spans from Iceland to South Africa, from the Atlantic to Moscow, is the most technologically advanced of the three, but one of the most devastated by war. South America is in the Pro-Axis camp, having initially been their allies until the Venezuela Conflict of 1957.

The Soviet Union: a behemoth state comprising of Siberia, India, and China. Initially all subjects of occupation after the Soviet attack on the Allies in the 1950s, they have grown in unity and cooperation.

The Chicago Pact: the third of the sects, is a coalition of the remaining democracies of the free world. The USA, Canada, Mexico, and Australia. Currently, they are engaged in a war with the Soviet Union, only recently defeating the Red Army in Australia.

A full backstory can be found here:
Forum.paradoxplaza.com

PLEASE NOTE THAT THIS IS FOR ARSENAL OF DEMOCRACY (SEQUEL TO HOI2).
Thank you.

Hello again! After a summer of hard work and many setbacks, we have finally reached the next release. I am aware that many feared this mod dead, but that is not the case! We kept putting off the next release until we were satisfied that our followers would be happy. Now, if you could take a few more minutes, I'll gladly explain a small portion of the changes we have made.

As per usual, Dain has done amazing work on the event structures over the summer. Hundreds of events were added, improving existing framework that was in the March release. Many events, as you may notice during the course of the game, will allow you to set the future battle plans of you and your allies. With the new AI coding, the AI should respond to your directions and attempt to carry them out. While you also have the option to push forward your agenda, be careful. As the US, you may choose to go one way, striking where you think might be effective. The Soviets might choose an offensive in the same region, or come in for a backdoor surprise! I'd like to give a special shout-out to Rostov-na-Don for her awesome work in the AI sector, creating many of the AI switches that make this AI possible. 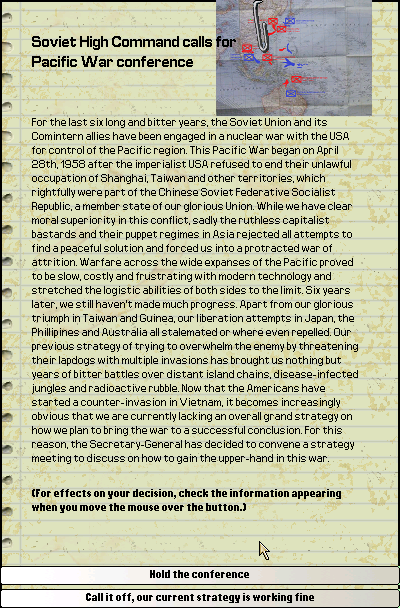 Now where would be we without some pleasant graphics to look at. In addition to graphics for the tech tree, we've added some nice graphics for unit pictures across the board. An example of some of these is shown below. 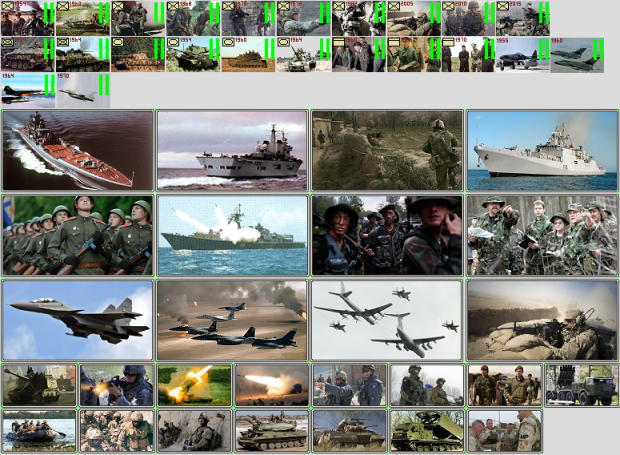 Naval was left rather untouched in the March release, mainly because we were unsure on which path to take. While the current naval doctrine tree is far from perfected, it is in a usable shape. We rewrote this tree three times before we were satisfied with the structure we have.

In addition to this, we changed the way naval works ingame. Naval fanatics should pay attention to this, as some important changes have been made here.

Destroyers in the modern age took on a heavy-combat role, rather than being just a mere screen vessel. These are now capital ships. Trying to use them as a screen will not work.

Cruisers are also a heavy ship. Their role will be primarily Anti-Air and Anti-Ship, but with some ASW capabilities. These are defined as a capital ship.

Corvettes are best related to the old destroyers from World War II. They are fast and agile ships, and are an escort / screen.

And last but not least, the Frigate. Frigates are a mid-step between corvettes and Cruisers, with ASW and AA capabilities. These are intended as a escort / screen.

As will be shown in future releases with changes to minor nation OOBs, the new structure allows for minor nations to build fleets around the new mid-tier vessel. Minor nations looking for a good navy will want to focus their fleet with a Cruiser / Frigate / Corvette combo, with a destroyer as the primary capital ship if they can afford it. Cost and Balancing will come as more people test this beta on a large scale.

Air Doctrines and Naval Doctrines now have completely new technology trees, so look forward to seeing these new ones ingame. They also include regular 'training' techs, to further improve specific elements of your air or naval forces based on your personal preference. 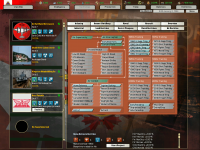 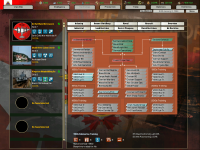 This version has been tested with Arsenal of Democracy v1.7


It is our hope that this was well worth your wait, and we look forward to receiving input on the various aspects of the game. All comments are welcome, as that is the only way to truly improve the game. We only had a handful of testers, so if any bugs arise, I will be quick to hop on and release bug fixes.

We hope you enjoy this release! Give both Dain and Rostov-na-Don a good round, as without their dedication and work on this mod this release would not have been possible.

After many hard months of laboring, coding, and stressful interruptions, we finally have the next release of our mod, Alpha 1.1.2. There are many changes...

This is a short update on the progress and development of the mod thus far, which will outline several of the events in the upcoming release. This will...

This update is just to inform the public of our progress, as well as showcase some events that we have been working on.

This patch includes numerous updates, too many to list in the short description. A short list includes: Updated OOBs, new bridgades (transport helicopters...

This is a hotfix that patches some problems that is caused in the save games. This hotfix gives a temporary boost to the Soviets, who were weakened by...

Here is our latest version of 1964, long delayed and long anticipated. This version is not a patch, it is a full release. This version has been tested...

Wow, now I gotta get my hands on AoD and DEFEND DEMOCRACY!!
I loved your AAR (why, Cools, WHY!?) and I love the fact that you
continue to develop that timeline as a mod (wich looks pretty damn awesome atm).
I want to thank you and everyone who contributed to this mod in advance for killing my sleep-schedule with your work ;)

Thank you for the feedback!
We're trying our best to have this work :)

Thanks for your interest! Sometimes even I am up late re-reading that thing, remembering :D

Eventually another update will be released here, I'm trying to get our crew back in shape from the winter break.

We appreciate every thanks we get, it really encourages us to continue :) (So do bug reports!)

Im super hyped for this mod! I think its very nice to be playing as Sweden and spamming militias with technicals like some southwestern-asian country.

I have a problem with the save games.After I save and exist the game,when i reenter the game,i cannot load the game i saved!

There is a hotfix currently being uploaded to fix some release issues.