Kingdoms is the most content-rich expansion ever produced for a Total War game, with four new entire campaigns centered on expanded maps of the British Isles, Teutonic Northern Europe, the Middle East, and the Americas.

In Medieval II, you were only given a tantalizing glimpse of South America, but in Kingdoms, vast tracts of land in both North and South America have been opened up for you to conquer.

All-new factions from the New World are also now fully playable, including the Aztecs, Apaches, and Mayans. 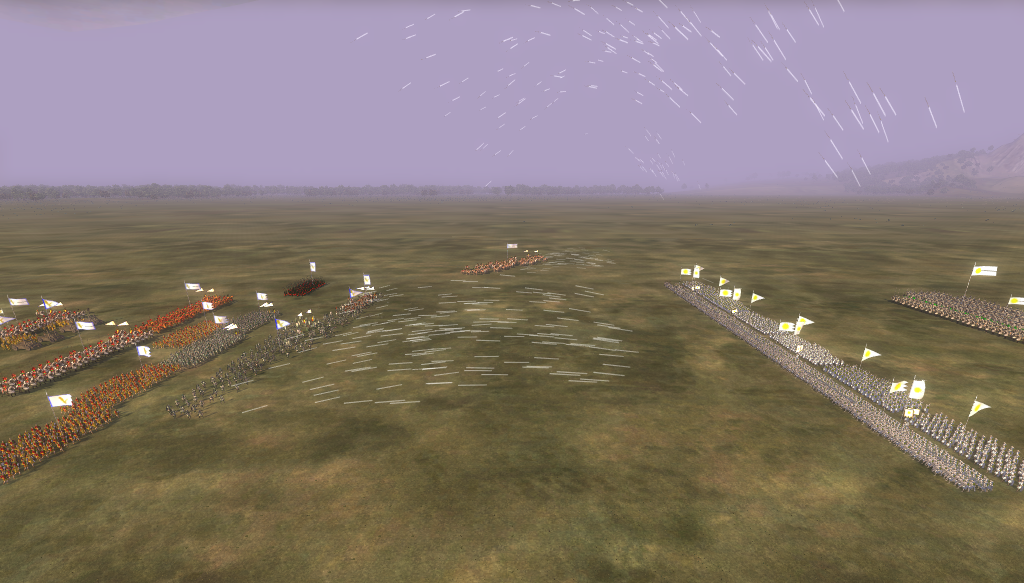 Battlefield:
Arrow Tracers:
Arrow tracers make the arrows more visible. I tried to make them enough to track the arrows without it seeming too unrealistic or ugly.

Manetheren:
Added Manetheren to the game. They will be in a future prologue, but for now are just in a historical battle. They can be enabled to custom battles, more on that when the update is released.

Dumai's Wells:
The iconic battle of the Wheel of Time, you can fight as the Shaido, White Tower, or Perrin Aybara against the others. Later on the Asha'man arrive, travelling to the battlefield.

As someone noticed, I had some base units ingame, such as Knights and Sergeants Spearmen. They have been split into a unique version for each faction. Cairhienen Spearmen are worse than their Andoran counterparts, but their Horsemen are better. These slight balances make each faction more unique. Added bannermen.

The Aiel now wear cadin'sor to battle. These brown coats and headresses still have the veil of the Aiel, but it doesn't cover all of their heads, and just their face, as is more accurate. Far Aldazar Din are now melee infantry, but they throw javelins before charging into combat. The Aiel also run faster than normal people, meaning that they can overtake most infantry. They can also hide anywhere.

Asha'Man now wear their distinctive black coats into battle, looking much more realistic. They also have received some buffs

The Borderlands have received a few new units 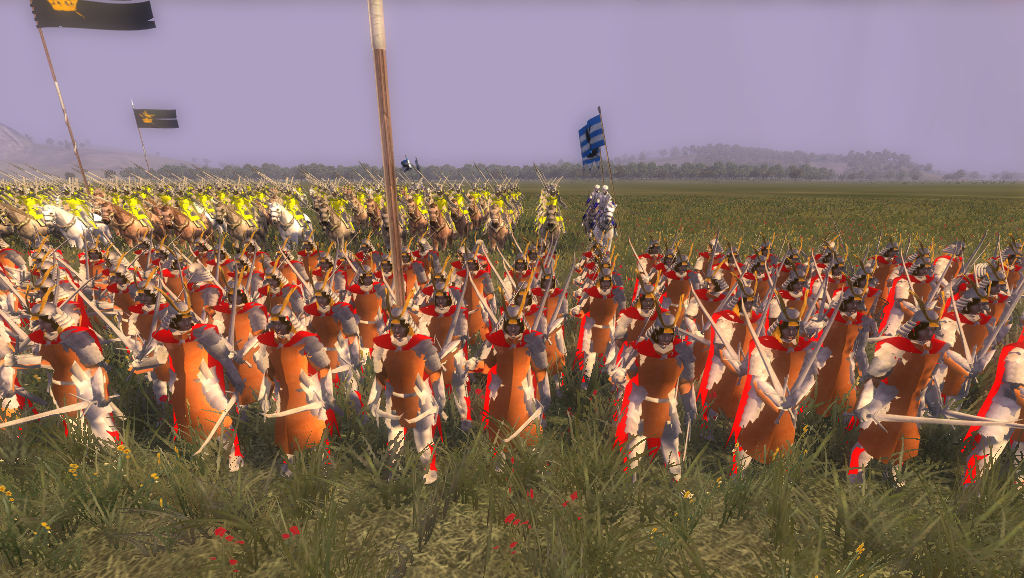 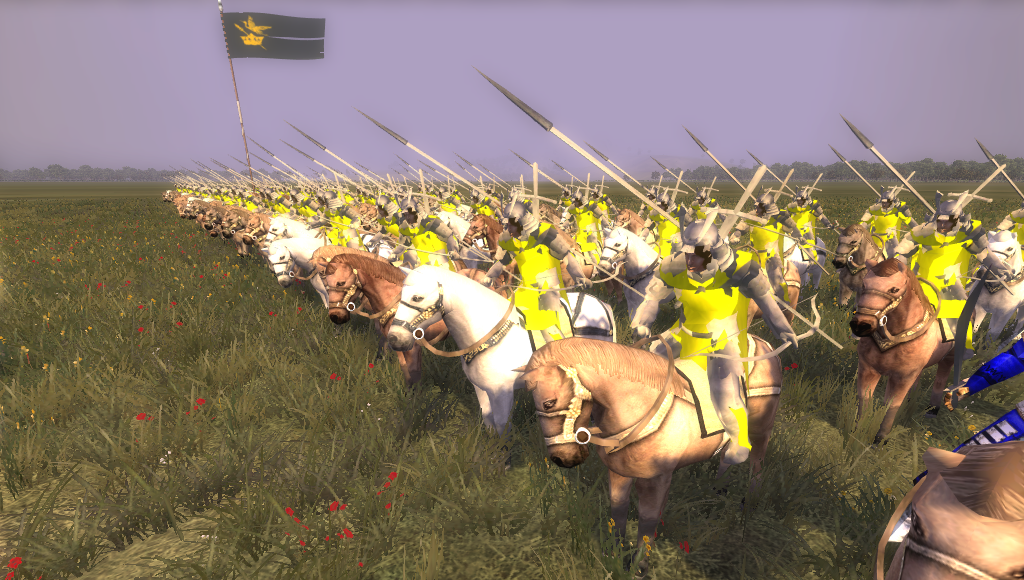 The Dark One roster has received several new Shadowspawn units as well as a rework of the Trolloc Units. They now have much more variety and much more accurate looks. 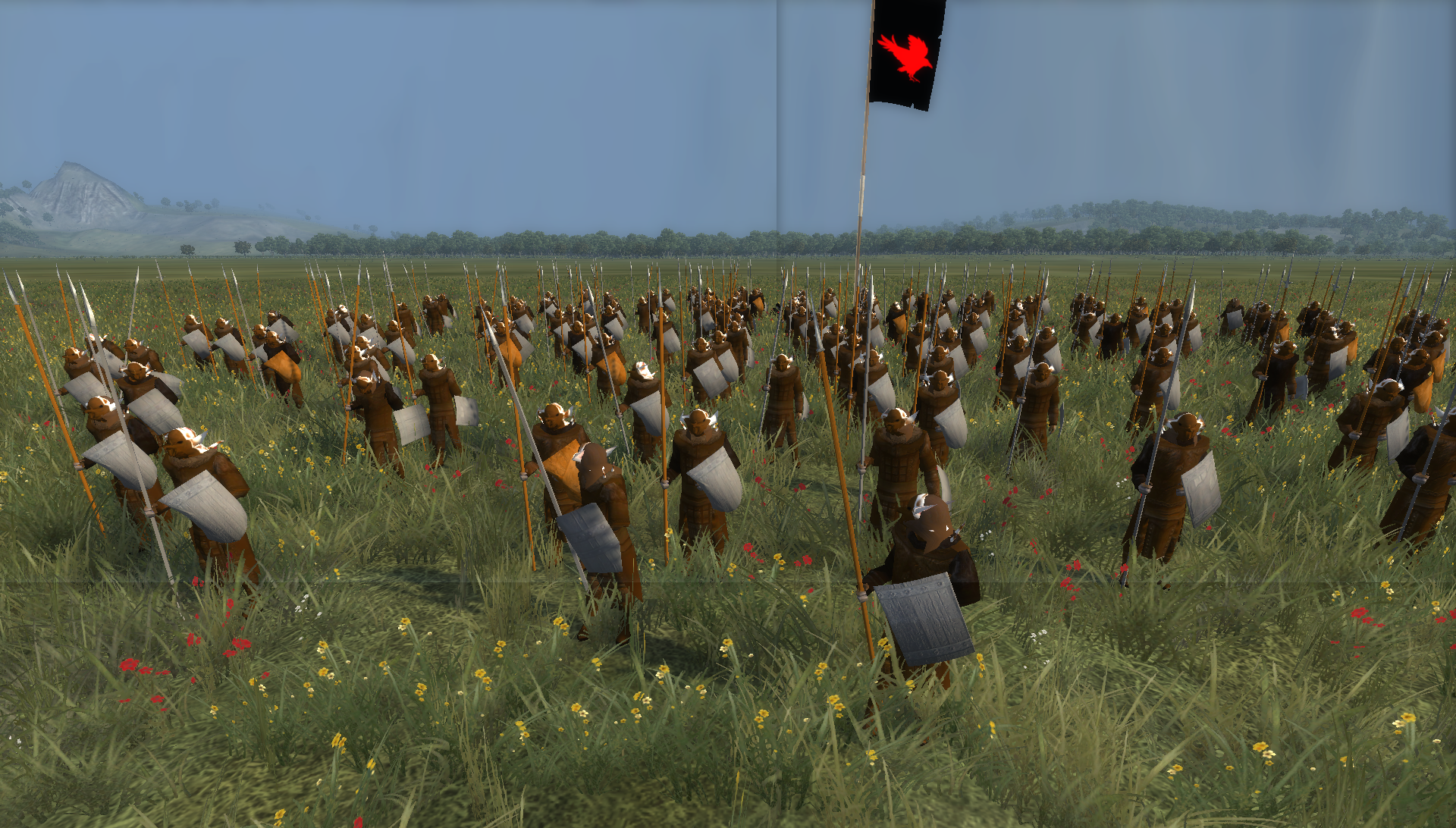 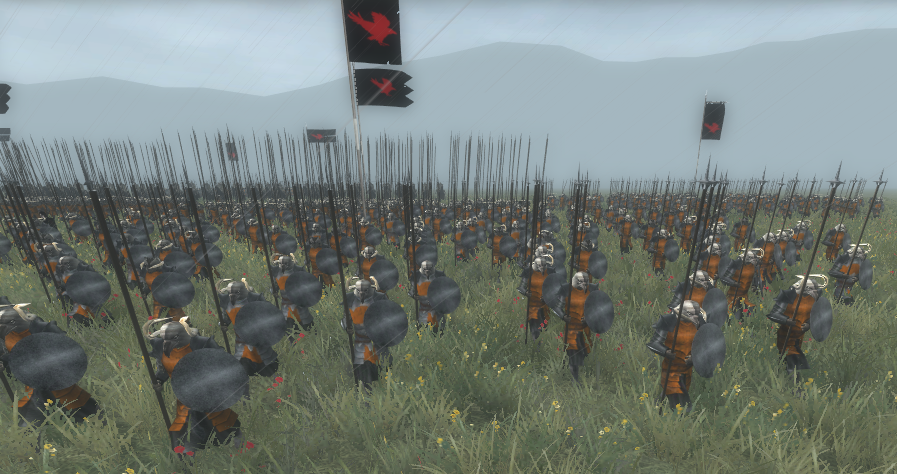 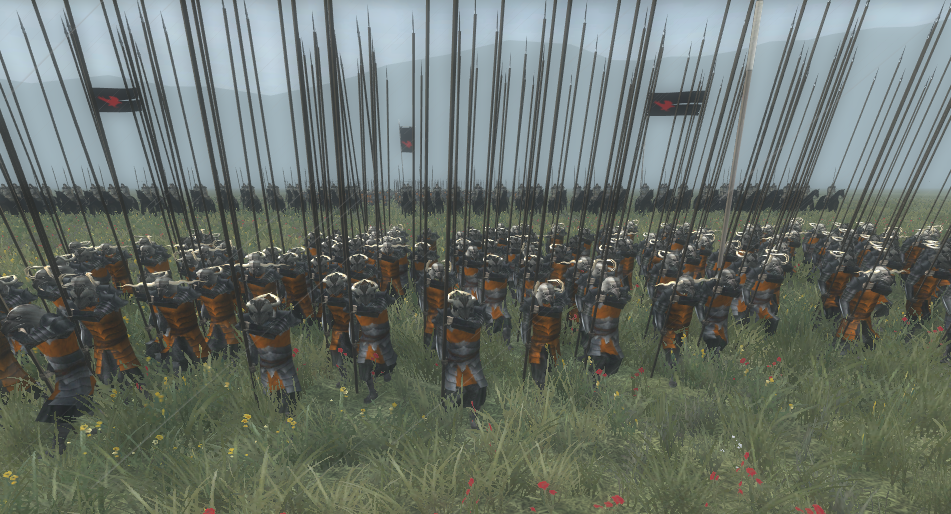 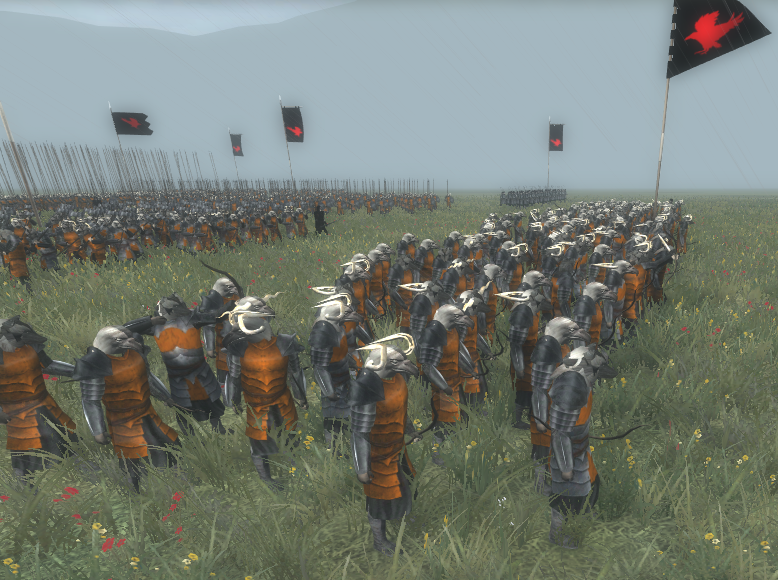 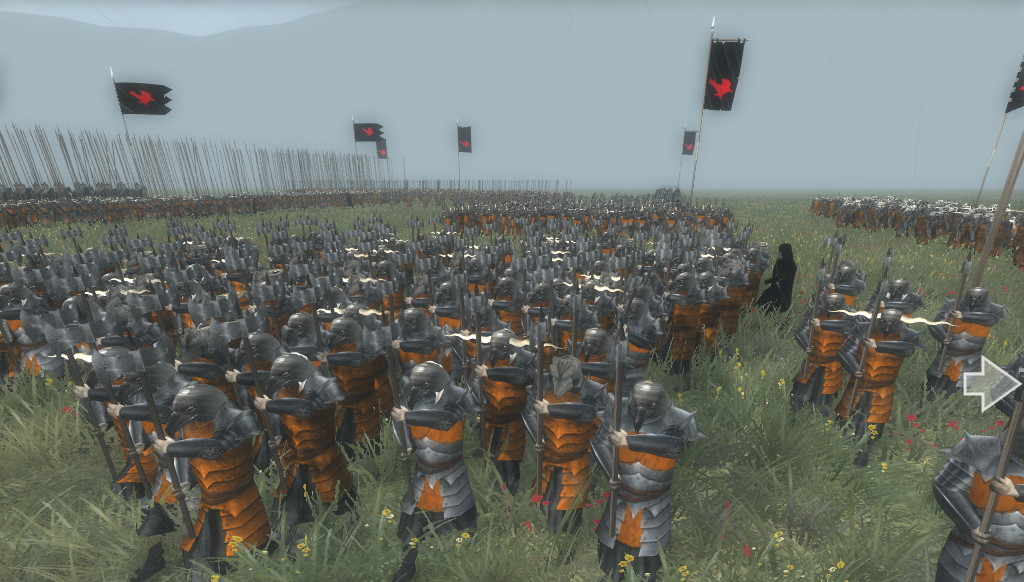 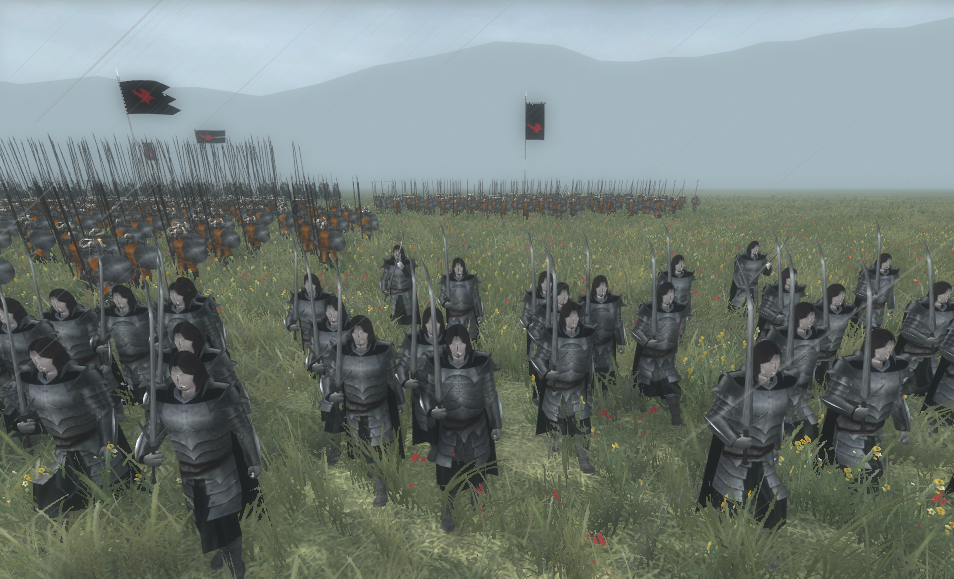 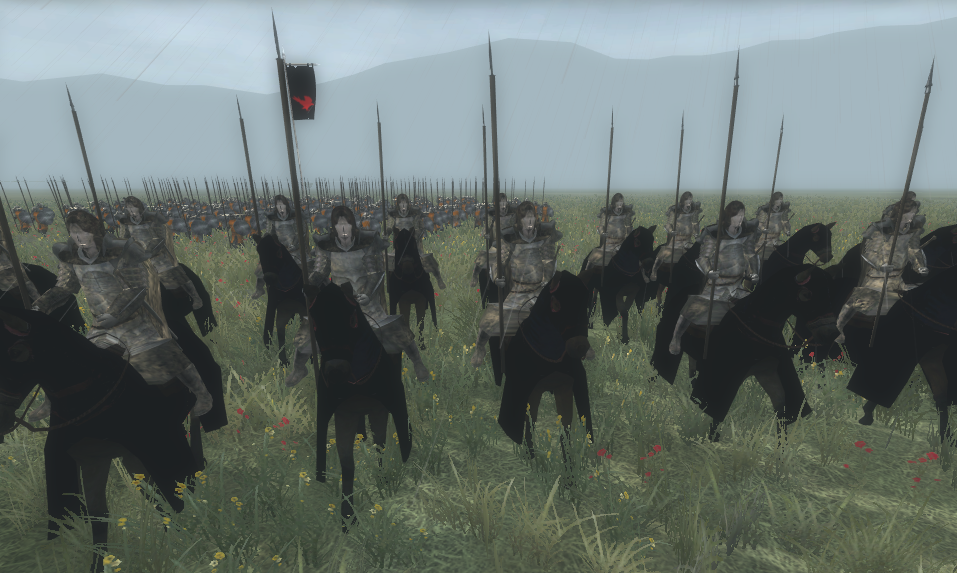 I've felt for a while that the Seanchan were under their potential. They had a few native units but nothing actually good. So I've redone them, with a large number of native Seanchan Units added and the few Westland ones acting as Altaran and Taraboner Auxiliaries. Furthermore, I've rextextured the Seanchan units and redone the Deathwatch Guard, making them much more impressive and lore accurate. 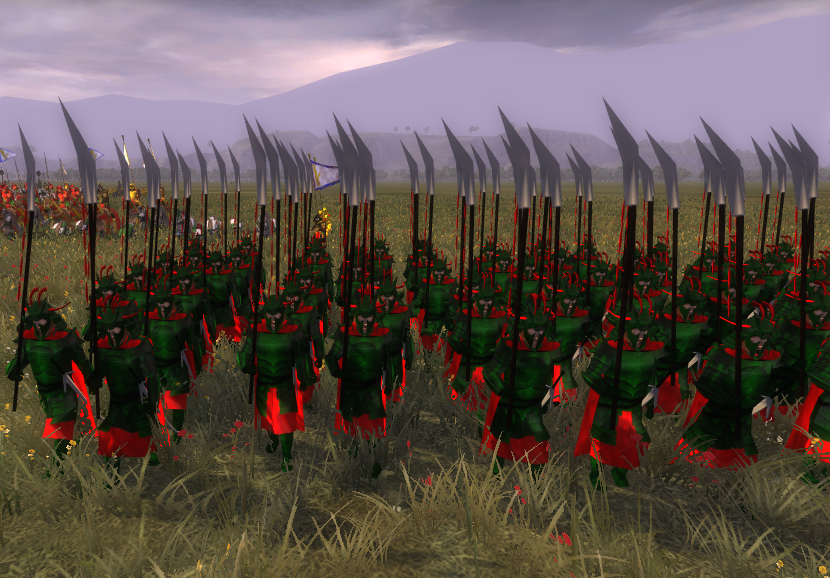 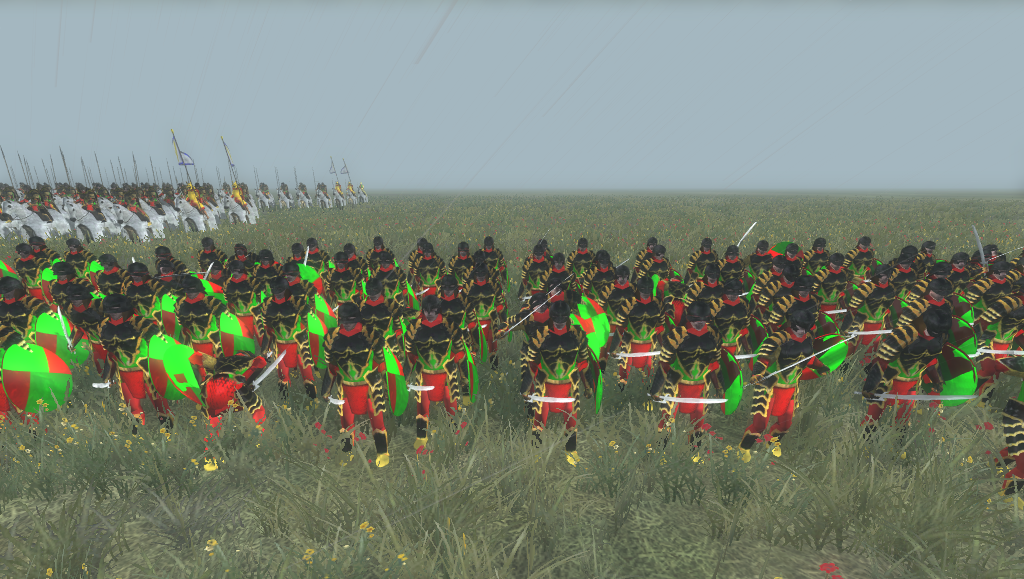 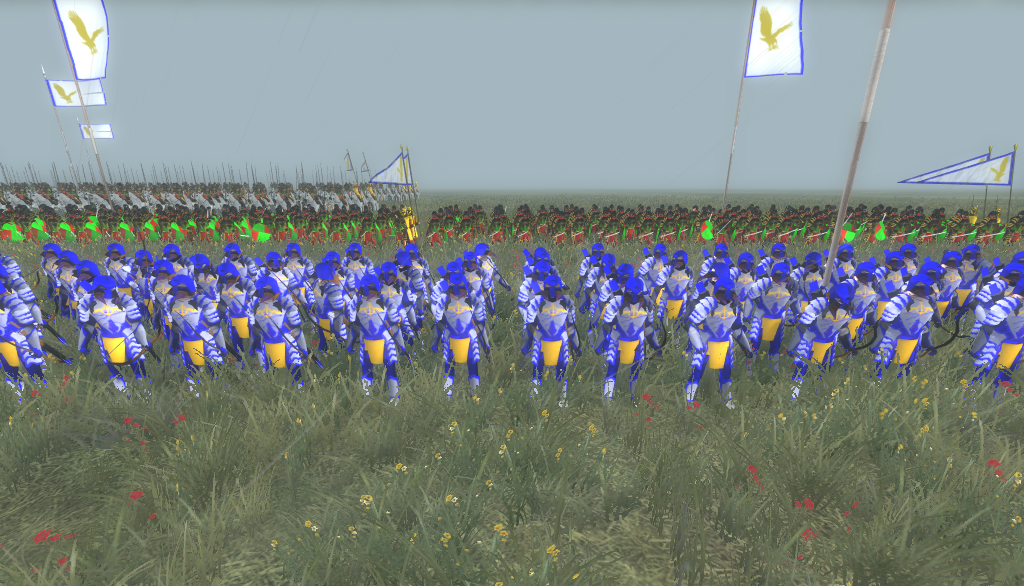 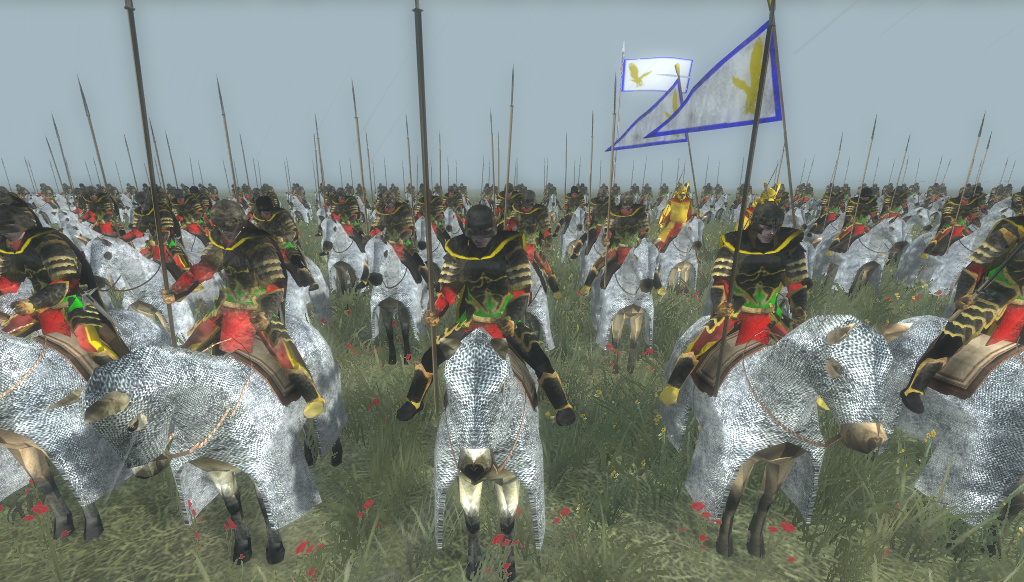 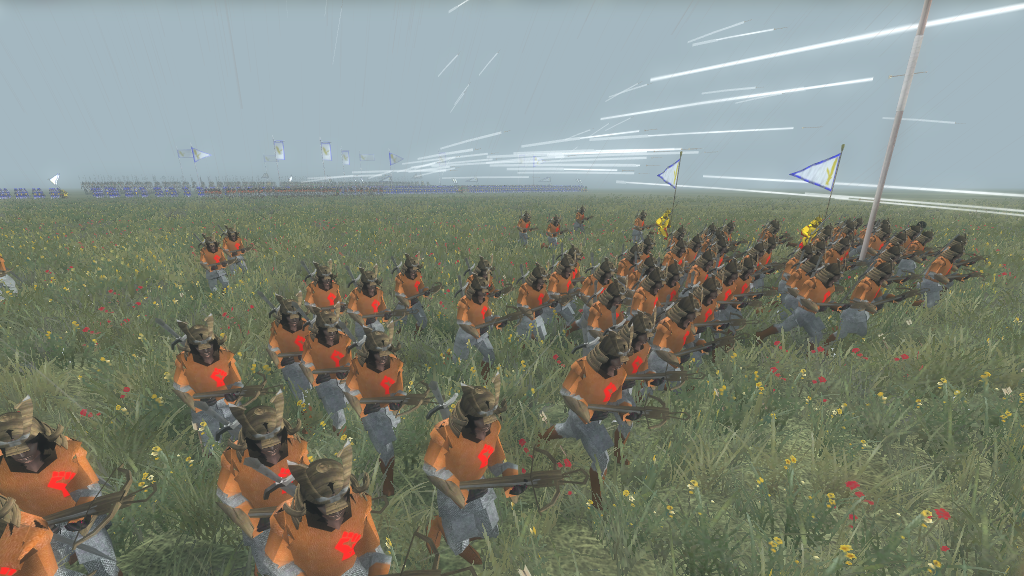 Almost all of their units have been remodelled to have either kettle helms or barred helms, as well as some new pikemen and crossbows. The younglings look vastly different, with new armor, helmets, and archer and lancer variants.

The Whitecloaks were a lackluster faction before, with maybe 5 units, and only one unique unit. This has been fixed. They now have Amadician auxiliary units and three tiers of units: Basic, Legion, and Heavy. All except the Amadicians have the whitecloak of the Children. They specialize in armor. 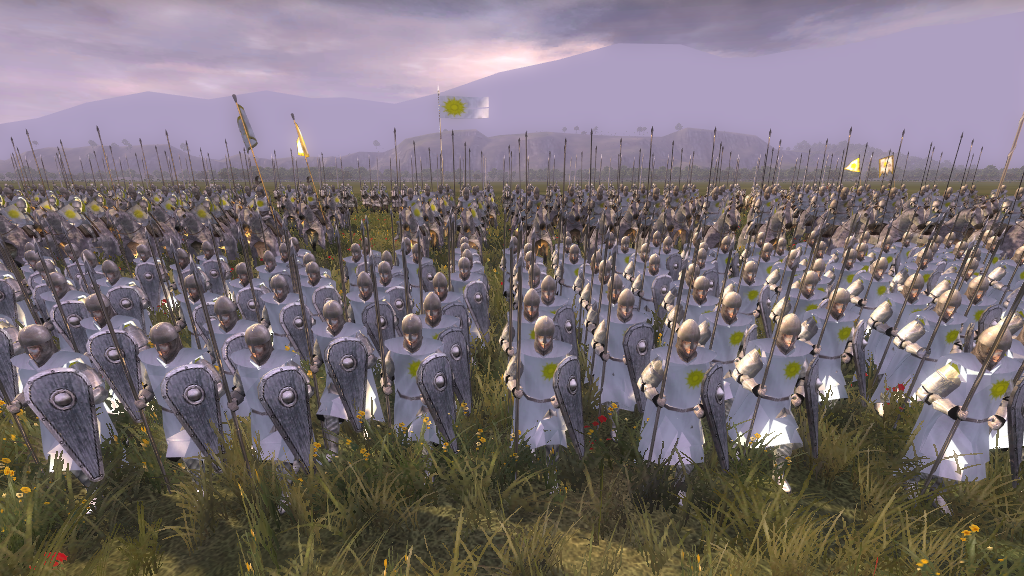 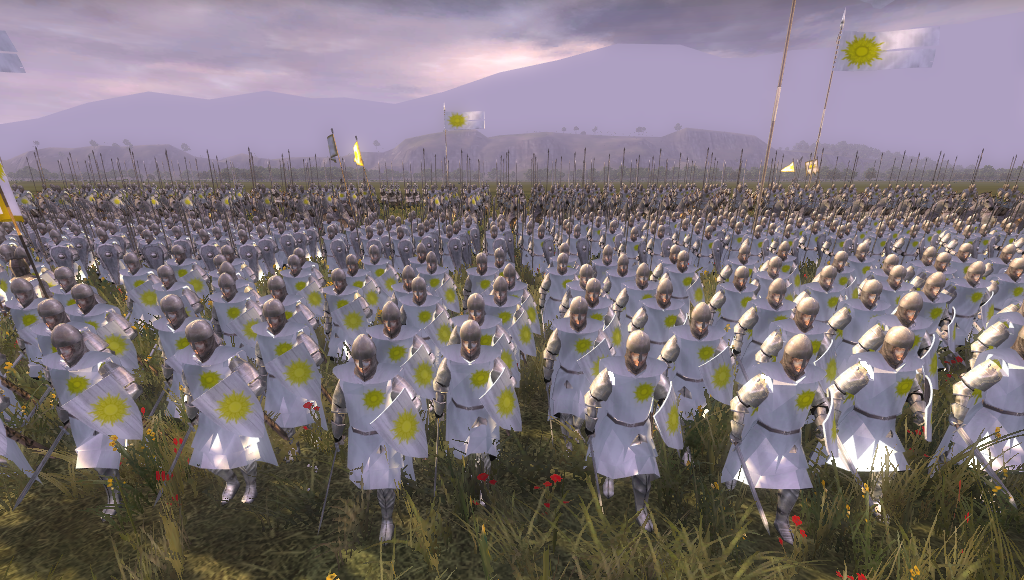 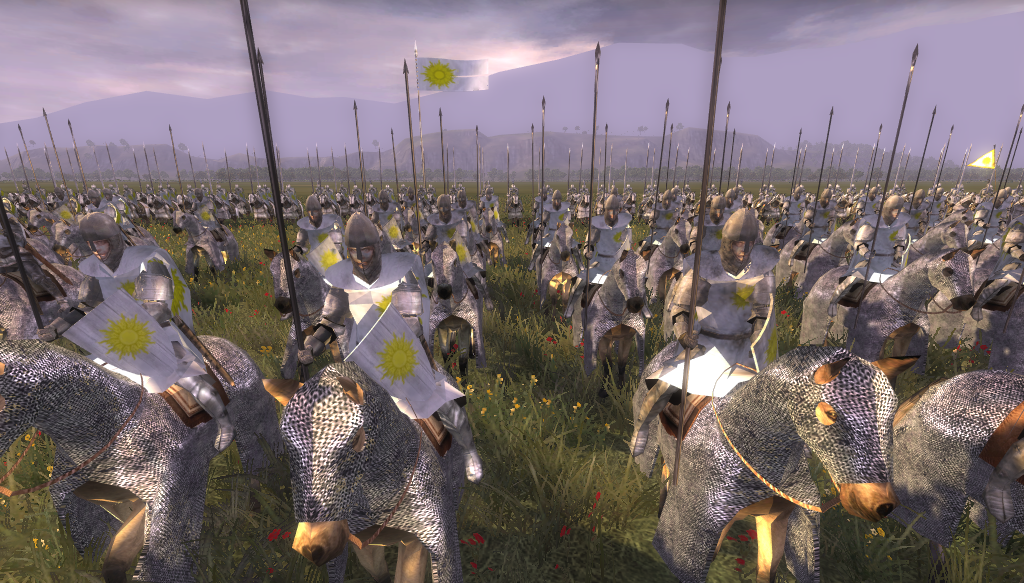 The moment you've been waiting for: the campaign.

The campaign is out, finally. The map has been edited a bit. This is alpha, so not everything is finished, but the campaign is working and coming out. Some new features include:
Dragonmount:

Dragonmount looms over Tar Valon, a massive mountain created by the death of Lews Therin Telamon. 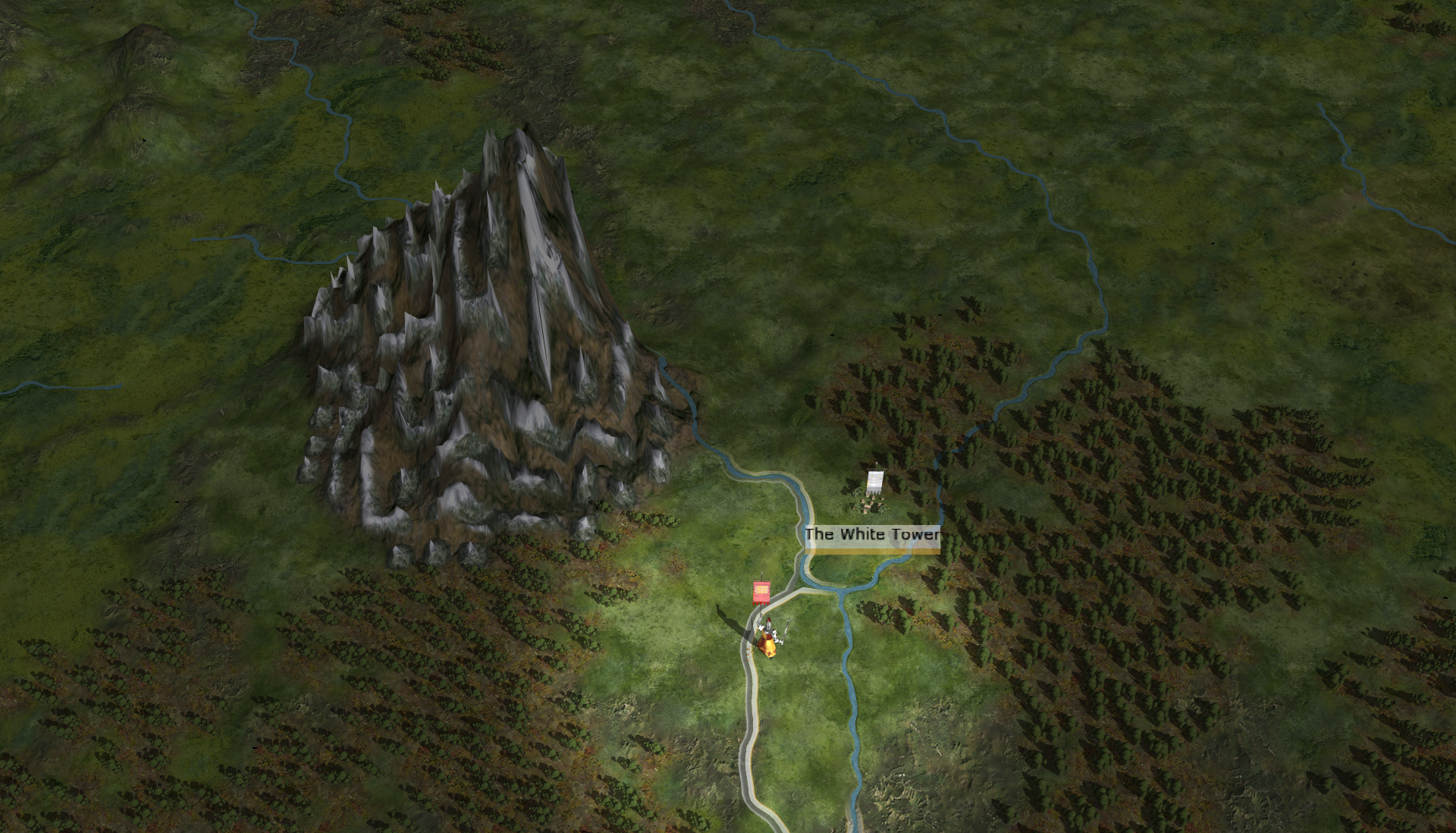 Every Seanchan character has access to the Blood Trait. When a man of the hour or candidate for the option happens, the character starts with the Common Blood, as do new agents. but by being successful in their field they can be promoted to the Low Blood, then the High Blood, then the Imperial Family, though that is rare. Furthermore, this is hereditary. If a character earns their way to the Low Blood or High Blood, their children will be of that Blood, and be able to rank up in it. So if a character makes it to the High Blood, then their children will be of the High Blood and will be able to earn their way up higher. Each level of the Blood offers perks, as well as unique ancillaries. If one is of the Low Blood or up than they have a chance to gain Da'Covale in settlements. If they are of the High Blood or up they gain access to So'Jhin, which are hereditary. And upon joining the Imperial Family than they automatically gain a Deathwatch Guard ancillary, skyrocketing their personal safety. Of course, promotion can be slow, and only an incredibly successful general will make it all the way to the Imperial family, but their children can take it up after them.

Seanchan and members of the Band can gain military office traits, with Marshall General being granted upon becoming faction leader. These give various perks for their field. Not only are there the basic ranks: Captain, Banner-General, Lieutenant-General, Captain-General, Marshall-General, but there are also specialized Seanchan ones: Captain of the Air, Captain of the Green, etc.

Agents of the Dark One can rank up in the Darkfriend Hierarchy, gaining more skill in their chosen jobs. Not hereditary.

Every character has a chance to get the Channeler trait, which gives a number of buffs. Characters have a greater chance of getting it if their parent has it. However, if a male character has it, then they will slowly go insane from the taint.

Another quick article detailing one of the great houses of Elves, those of Fingolfin, High-King of the Noldor. Names are subject to change, as are a few...

The map for the campaign has entered a basic stage, where we can view it ingame. The actual campaign will be a while in coming, but you can view the terrain...

The unit names in the custom battle screen are pretty hard to read sometimes, apologies, here's a better menu, just drop the zip file into your India...

The new Corenne Update overhauls almost everything. Be warned, you need to delete the old mod folder, since this version removes unnecessary files. Enjoy...

Put the file in the data document then overwrite it.

This file is an all in one. Simply replace the contents of your old install with this. Please note that this build does not include the Falathrim nor...

Extract the file with winrar or zip. Place the files in Divide_and_conquer, then overwrite everything.

Rise of the Eagles Patch 1.0d

Rise of the Eagles update 1.0d, Patch notes in the description.

One of the best Total War games if not the best

Why does the mods tab not show any mods?

My first game from the Total war series. I spent many months playing this game.

You're all invited to my discord <3 https://discord.gg/h9x7gjs We play mods, and even vanilla campaigns, pvp, talk and stuff. ;)

Can anyone send me a link or a website when I can install this game pleas help I love this game too much and I like to play it !!

Just buy it from steam, my dude.