Rise of the Reds – or ROTR for short – improves upon the C&C Generals formula while also adding its own distinct elements to it. Most notably, the mod adds two completely new factions, the tank-heavy Russian Federation and the defence-oriented European Continental Alliance. In addition, the three original factions China, USA and GLA have been greatly expanded and redesigned in a variety of ways, with several new units, buildings, powers and abilities to explore and combine in your in-game tactics. ROTR also changes some of the game mechanics in order to create a unique and fresh experience. Examples include a technology progression system based around three tiers, a more fleshed out counter system between air and anti-air units as well as an additional emphasis on specialised scouting and detection units which serve to make stealth tactics a more viable option than they were in the original game. Beyond the gameplay aspect, the mod also brings many cosmetical updates, spectacular special effects and custom sounds and voice overs to the table.

The most recent version 1.85 was released in April 2015. Aside from adding many new units, special powers and visual overhauls for all five factions, the release was tied to the premiere of SWR.net, our very own online multiplayer service which is organically integrated in the ROTR executable and allows you to enjoy exciting multiplayer battles with players around the world via a virtual network.

The next major release version 2.0 will bring generals back into the game, allowing you to choose between 15 all-new sub-factions (3 per faction) that further capitalise on the tactical themes of their parent factions. Unlike Zero Hour where generals were chosen during the match setup,ROTR's sub-factions will be chosen in-game at the very start of the battle, as it was originally intended in the unreleased beta version of Generals. Thus, vanilla factions in the original Zero Hour sense will no longer be present in the 2.0 version. Additional features are currently planned to include two story-driven campaigns and a new game mode akin to Zero Hour's iconic Generals Challenge.

And this weeks update we will be showcasing you the new ECA Munitions Bunker: 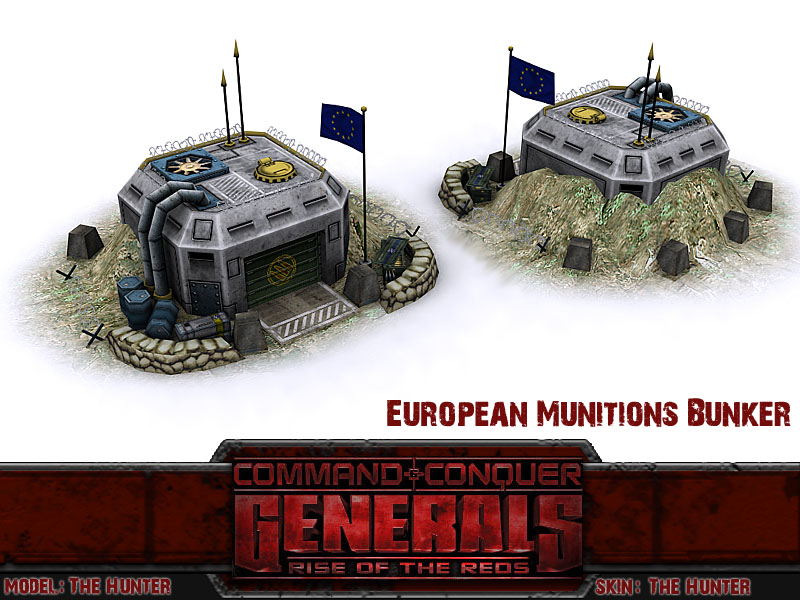 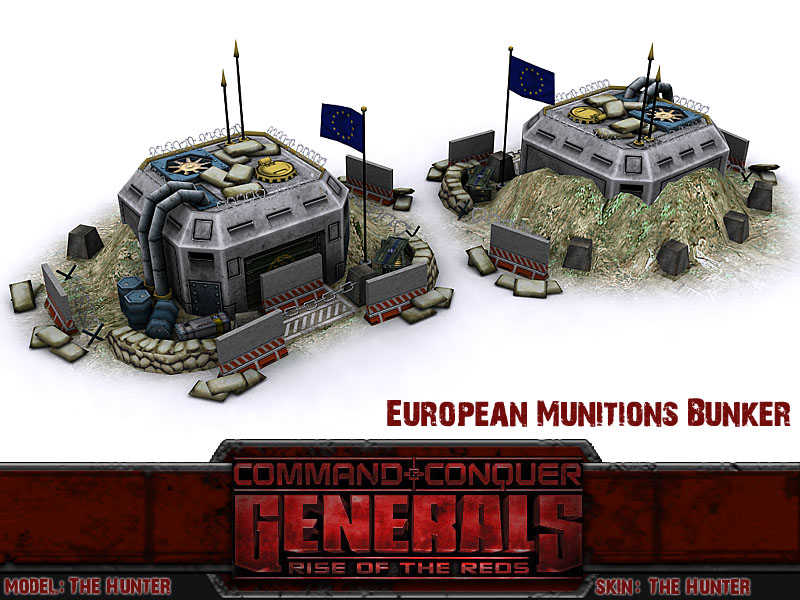 ECA forces had previously relied on ad hoc fortified bunkers to store ammunition on defensive lines, yet it soon became apparent that a more effective solution was needed. A new reinforced concrete bunker design was rolled out on the European front, serving as both a firing position for up to three ECA troops as well as a more resilient forward ammunition depot. The Munitions Bunker is also capable of deploying Munitions Tracks to resupply defensive divisions closer to the front. Due to its usual presence in hostile territory as well as the volatile materials being stored within, the Munitions Bunker can lock itself down to improve the bunker's resistance to enemy fire. It should be noted that doing so prevents the doors from being opened to supply defenses with ammunition, and disallows access to the garage. The commander of the bunker is authorized to call in mine artillery strikes around the bunker; these are specially designed to fire Mole Mines at long ranges, equipped with parachutes allowing them to deploy safely without damage. Due to the fact that the bunker stores a large amount of explosive materials however, the commander is not authorized to call a "Danger Close" strike in-case of nearby incursion. In the worst case scenario of a forward position being completely overrun however, the staff of the bunker can easily rig the munitions stockpile to detonate in order to prevent capture of materiel.

And a friendly reminder that this upcoming Sunday, we will be doing another live stream of the newly released public build.
The stream will as usually be hosted by Hecthor Doomhammer on his channel: Twitch.tv 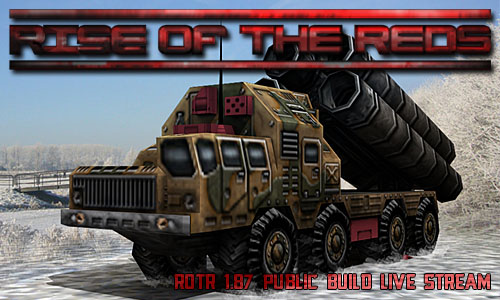 Hello everyone! It's that time of the year again! The ModDB Mod of the Year award nominations have officially begun just a few days ago! Last year we...

Greetings followers, fans and fellow gamers. Us developers and beta testers have been working tirelessly on getting ROTR into a better shape than before...

This week we don't have any updates for the normal factions but instead we've made two new vehicles for the Militia NPC faction for use on custom maps...

Check the read-me and Change-log in the file for further details NOTE: that this is not a full release and requires ROTR Release V1.85 to be installed...

After a long wait of almost two years, we are proud to present you the release of Rise of the Reds Version 1.85. In the name of the SWR team, I want to...

ROTR Patch Release 1.802 NOTE: Previous patch of 1.801 not require as it is included

ROTR Patch Release 1.802 NOTE: Previous patch of 1.801 not require as it is included

In the past few days, we actually read a lot of comments and looked into the feedback many of you provided. Due to all this and a few observations of...

In the past few days, we actually read a lot of comments and looked into the feedback many of you provided. Due to all this and a few observations of...

the latest version in this mod makes Russian AI in hard Mode sandbox. they only use infantry units. is this a bug?

why does my launcher show up as black

Never heard of such a bug. Try reinstalling the mod

good morning everyone really liked that update for the U.S.A the logistic support
efficency giving more bundles and economy boost for the faction of U.S.A

Hi Team, what is the latest version as of now, including public builds? i just wanna make sure im not missing something. Thanks!

awesome mod, with lots of potential rivaling some of the best mods.

the fact that its still in development speaks wonders of whats to come.

Single & Multiplayer
Tags
Embed Buttons
Link to Rise of the Reds by selecting a button and using the embed code provided more...