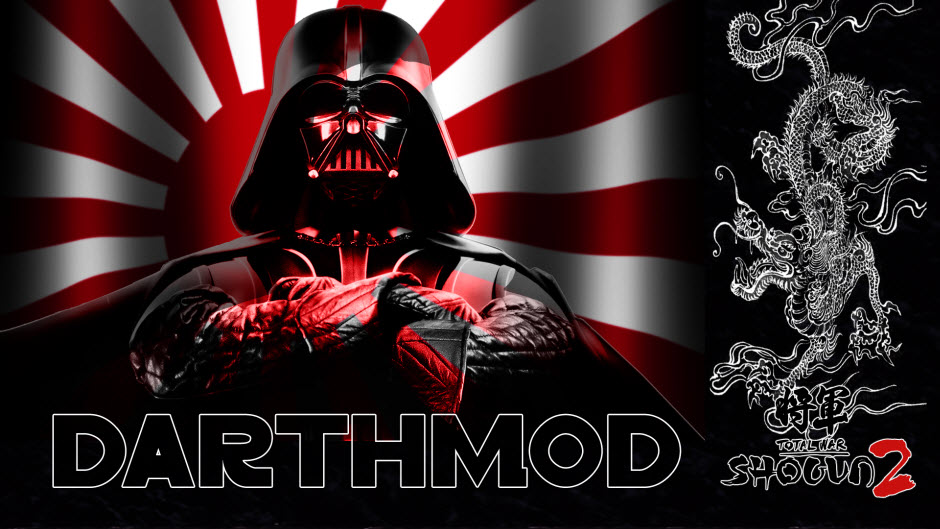 The DarthMod series of mods continues to improve the AI and gameplay of Total War games.
As always, the mod’s main scope is to destroy the “weak” arcade factors and replace them with realistic features.
Witness now Total War: Shogun 2 as you have ever wanted.

Generally it improves every crucial gameplay factor while it stays close to the feel of the original game.

It does not affect your game installation as you can enable and disable it via a special launcher application.
Furthermore you can use additional mods and options with a few clicks.


In DarthMod: Shogun II you will enjoy a redesigned melee system
which makes battles look like real, "really real"!

When 2 armies clash, you will notice violent pushes, formation penetrations, heroic 1vs1 melees,
as it would look in a real battle of the era.

Arrows spread realistically and are powerful according to the skill of the bowmen,
but still no match against the matchlocks.

Sieges are really challenging because the new morale, melee and projectile system
create a chaotic and difficult to handle environment.

Even the naval battles are much improved and are a joy to watch,
fun to play and, most importantly, difficult to master! 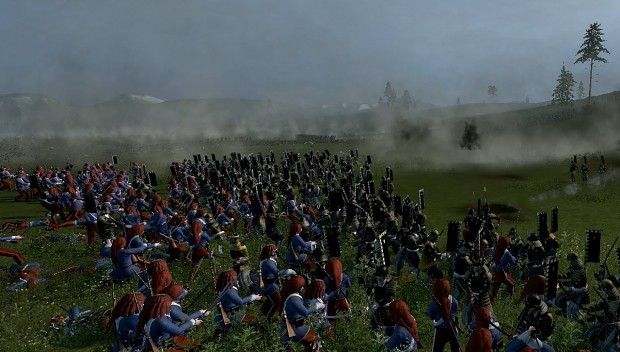 All Total War: Shogun 2 DLC and Campaigns are supported
and the realistic battle atmosphere becomes complete
with super effects that do not decrease FPS but increase it!

Do not get lost in Feudal Japan's war turmoil!
DarthMod Shogun is the mod you were, are and will look for!

Thoal for gifting me the game through Steam, for his Rise of the Samurai DLC, for his Fall of the Samurai and his Saints & Heroes DLC gifts.
"Total War Greece" for gifting me the retail version of Fall of the Samurai.
PlacidDragon for too kindly gifting the game to... the wookie hip63 who abandoned the project.
Syntax for our old and valuable forum cooperation.
Mr Kami for his special donation, his Sengoku Jidai DLC gift, his Rise of the Samurai DLC gift, his very helpful feedback and the moderation of the forum.
KERA_AK for gifting me the Otomo DLC and for his general support.
Edward Reynolds for his very kind donation.
Fracchione for gifting me the Ikko Ikki DLC.
BayonetFodder-San for his always helpful feedback and his moderation of the forum.
Le_Fred for his really fantastic battle stories with DarthMod images.
Diadok, wrcromartie, VENNONETES, for their epic screenshots.
aion2006 for his super screenshots.
taw for his valuable mod tools.
Lord Maximus, Porphyr, davidallen, daniu, DaFranker for the upgrade of the PFM Tool to work with Shogun 2.
Crux3D for his genious Symphony Tool with which I repaired the dreaded mixed sounds bug that was caused by the official patch.
Mech_Donald for making his special Battlefield Smoke Mod (BSM) for DarthMod.
Swiss Halberdier for his all around assistance.
=Vastator= for his so much needed unit variety mod "Vastator Unit Style" (VUS).
Demokritos for his superb quality work "Alternative Clan Colours Mod" (ACC).
♔Noif de Bodemloze♔ for his splendid "Boshin War Mod HISTORICAL FLAGS, BANNERS & UNIFORMS Mod, "Modern Japan Army Mod", "Optional Faction Recolors [FOTS] and New Bows Textures.
BullGod for his magnificent "Daimyos and Generals mod" and "Portuguese terços Unit Variety Mod".
IGdood & kungfuserge for their relieving bayonet mod.
Thorn for his Oda Boost mod (available only in the launcher version of DMS).
ToonTotalWar for the usual perfect cooperation, his lite graphics mod and his special horo removal mod version.
Voice of Treason for the beautiful artwork.
JFC for the beautiful artwork and his excellent unit cards.
The Hedge Knight for the Horo removal mod, the excellent Unit Variety Mod and his general support to all modders.
Jane for the Clan Color Mod (no longer used because it is not updated).
Wind for the Japanese Speech Fix.
Ftmch for his fantastic and massive unit retexture mod.
Superghostboy for his handy texture mod that increases perfomance and FPS.
La De Da Brigadier Graham for his music mod and his all around assistance (Generic all around good music which can be found here Twcenter.net).
Twosocks for his traditional music + sound mod (Based on atmospheric Japanese drums which can be found here Twcenter.net).
Ying, Duke of Qin for his great portrait mod named Furinkazan.
Gallus Domesticus for his Oda-Tokugawa alliance mod.
Elvasat for his beautiful portrait and event mods.
ordinary for his better encyclopaedia map (No longer used).
CoconutFred for his unit icon mod adapted for clan retexture mod.
Radius for his Sashimono removal mod and his other contributions to the TWCenter community.
akp for his ambush deployment zone mod.
freelancerX for his extra ambush & deployment zone mod.
No Leaf Clover for providing his temporary sound fix for the DarthMod community.
hip63 for his help at the early stages of the mod (The current DMS Launcher uses some of his ideas). 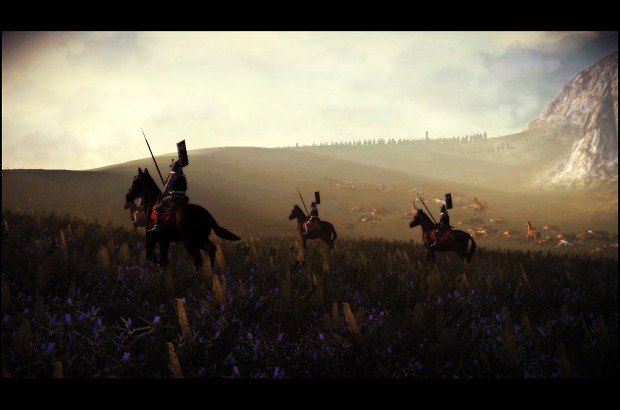 If it was not your valuable feedback and your continuous support, this version would have never been available. This last mod proudly represents my final work for the Total War series. All DarthMods will be finalised and will not be updated anymore unless it is needed.

It was not possible to add more due to upload limitations of Steam Workshop version.

A preview of the added mods

Many of you asked to add the following mods to DarthMod: Shogun II and now finally you have them! 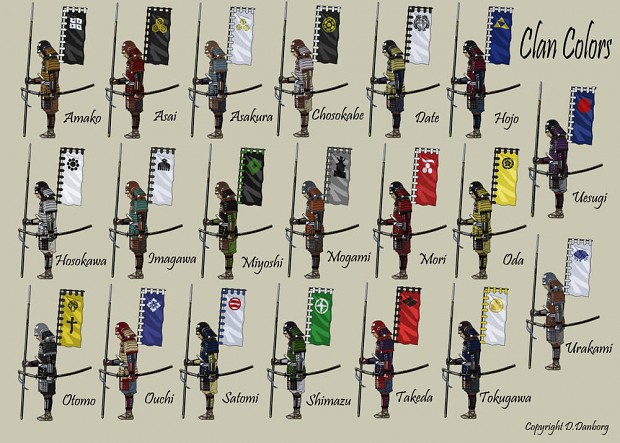 A must have mod for every player of Total War: Shogun 2. After the thorough research of Demokritos, the author, all units of Sengoku period have realistic uniform and banners colors. 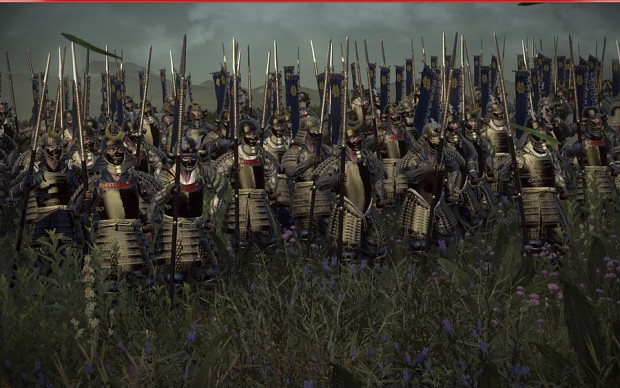 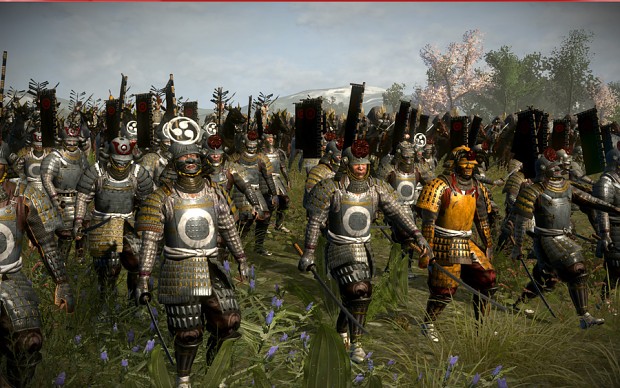 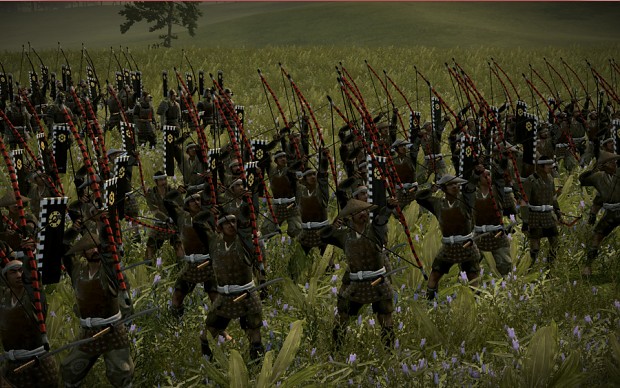 Just pay attention to these images. Do you see the difference? Soldiers have much more variety in appearance thanks to the magnificent touch of =Vastator=. All Sengoku period of every DLC have this careful design. 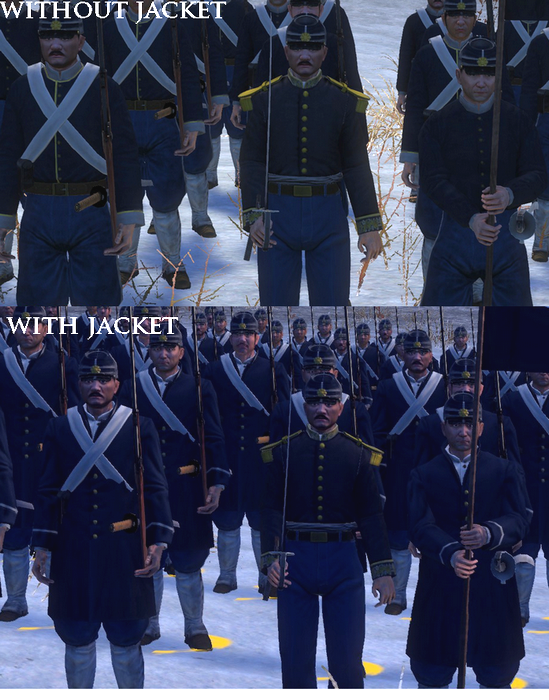 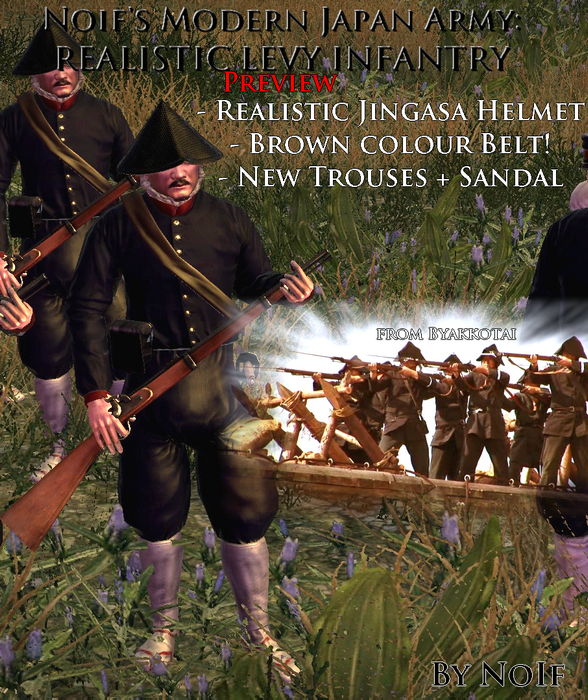 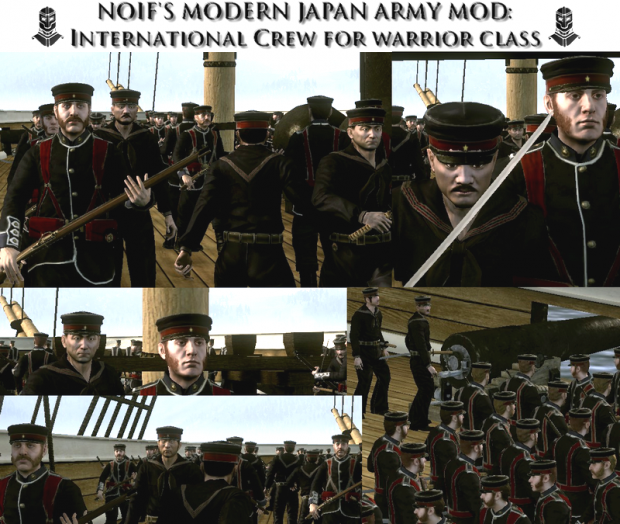 These are promotional Images from Noif's mods that are included in DarthMod:

In a few words Noif offers you a complete visual pack for the Boshin period. 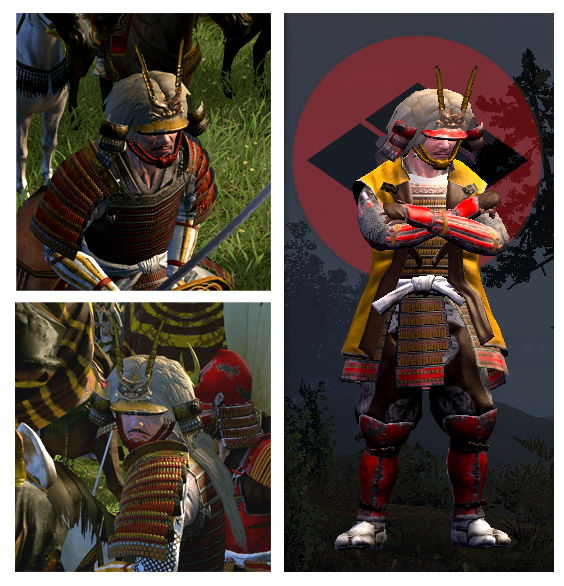 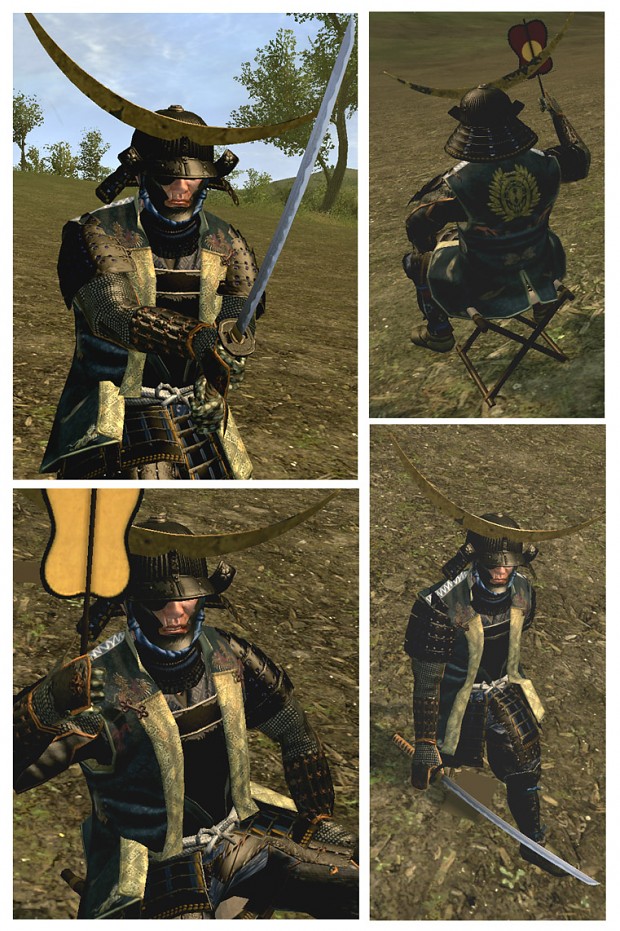 With the included "Daimyos & Generals MOD" you can see famous Sengoku period Generals with realistic appearances, like Takeda Shingen and Date Masamune above. 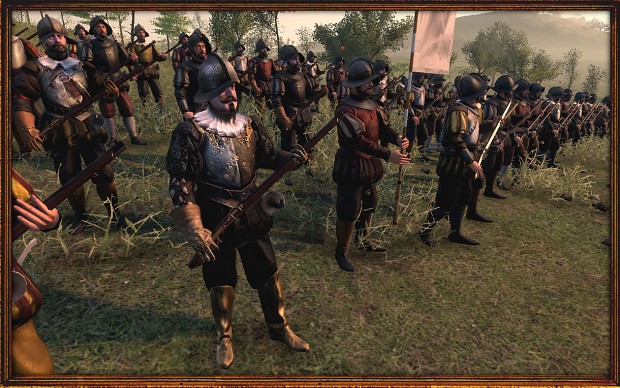 And also BullGod offers us an awesome unit variety for the Portuguese Tercos.
Indeed they look like real now.

More info about BullGod's mod below:


If you want to understand what awaits you, read Le Fred's illustrated stories of DarthMod Battles!


Update 25/3/2013
Small Launcher Hotfix:
DarthMod_Shogun_v5.0_Launcher_HotFix.zip
Fixes BSM Effects not enabling. It includes instructions how to apply.
Thanks to Vennonetes for reporting.

CA released new patch & DLC so DarthMod had to be updated.

DarthMod: Shogun II will not be updated again unless it is needed for a new CA patch adaptation or other very important reason.

This is the last version for DarthMod: Shogun II made with a hope you enjoy it.(It may get hotfixes according to feedback).

It is compatible with any DLC and campaign (Sengoku Period, Rise of the Samurai, Fall of the Samurai). It improves every crucial gameplay factor while...

It includes all the improvements of DarthMod: Shogun II v3.4 but some features are missing until the mod tools get updated so all available mod files...

what does this change in the rise of samurai DLC

Do you also have Spanish?

does it work if i don't have fall of the samurai?

Does this add units to RotS?

Have Metsukes been altered in this mod? They no longer increase income when placed in castles.

Schroedinger cleary hasn't played a totalwar game in his life as everybody knows the darthmod series are the best mod series out.

i enjoyed shogun but this was ten times better the unit scale is perfect and battles are much better.