Natural Selection is an action-strategy game for the PC. It is a "Half-life modification", which means it is written on top of the Half-life game engine. "Mods" are a new sort of underground game development that enables small teams to create games using the technology of existing games. This means less expensive and lower risk game development, which allows experimentation and innovation. This arrangement also implies that "mods" are made as art, not for making money. When complete, Natural Selection will be released for free to all owners of Half-life, which is required to play Natural Selection.

Multiplayer-only Half-life mod where one team plays marines and the other plays aliens. The humans must keep their cool and work together to assault an alien-infested spacecraft or colony. Marines vs. marines and aliens vs. aliens scenarios are also supported.

"First-person strategy" with a real resource model and consequences for actions. Both sides are genuinely different and together they accommodate different play styles:

Marines::Fighting skill is less important, strategy and communication take its place. Playing as a marine will be a tense experience with methodical planning and strategy, interrupted with action.

Aliens::Playing as an alien will be an intense action experience, rewarding reflexes and alien heroics. Communication and coordination don't require typing.

Accessible, fast, mouse-driven interface: no keys beyond those used in Half-life needed.

Simple to learn and play, it is hard-core action/strategy for a mainstream audience.

Natural Selection is out, go get it already! :P

The team is now working on a version for Half-life II and will post news here when ready. 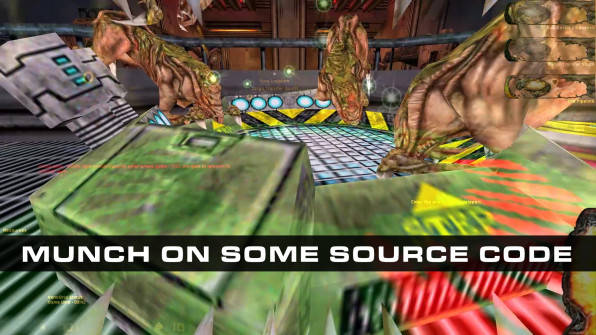 Back in 2002, Natural Selection was released…

Since then, lots has happened. Unknown Worlds was formed and NS2 was released, reaching multiple times the number of players the original mod did. Charlie, the creator of NS, has come so far that he’s now working on a new game: Subnautica.

But we will never forget what started it all. Today, we are proud to announce that Natural Selection Source Code is now available to anyone, free of charge. Head on over to GitHub to get it. It’s not ‘open source’ – There is some legal hoo-ha that prevents that. But it is all there.

You can use the NS source code to make your own version of the original game, fix problems with it, make new problems, or just see how the game worked.

We hope you enjoy tinkering with it. NS was one of the greatest mods of all time – And we can’t wait to see what you are able to do with it.

Unknown Worlds released the source code of Natural Selection and it is now free to download.

As you all know, we strongly value our ties to you, the community. When we released NS v1.0 after 18 months (games were easier back then!), in some ways...

For today's update we would like to focus on "Tram", one of several maps currently in development. This full sized NS2 map will ship with the Alpha, so...

Alien Versus Predator mod with RCBot for Natural Selection Mod

Hi guys! So there is a Natural Selection 1 Discord that seems to meet pretty regularly. Discord.gg

Otherwise I've gotten tired of not being able to reliably find games for old Gold Source (GoldSrc, HL1, Half Life 1) mods or Source (Half Life 2, HL2) mods, so I made a discord about just that. I have the above discord linked in mine and am also trying to make this place an informational hub. I'm trying to centralize and unite the multiplayer mod communities for all of the various multiplayer mods out there. We play a mod of the week every Friday/Saturday.

Is only unofficial(not created by Gearbox or Valve) half-life mod, that is still alive, Adrenaline Gamer?

Is this game dead? I can't find any servers. Did evey NS player move to NS2? What happened?

Hello, I anwer a bit late, but:
It exists Natural Selection 2, is not for free. You can buy it on steam.
So people don't play this one anymore.

Natural section 2 failed to impress me as much as this mod did back when it came out. Wish the second held up to what it was back when it first came out. Reminds me of Alien versus predator =)

I'm really looking for a server to play this game, if there is more people who wants it, i'll like to receive a message.

I want to play this game on a server as well

I don't know how to start a group where to contact all. But we are just two haha.