heXen:Edge of Chaos will be a new and free game, based on the original Hexen game that was developed by id Software and Raven Software. As of 2012 we have moved development to a standalone environment using the id tech 4 GPL engine.
The Doom3 engine (also called IDTech 4) is still a great engine that can compete with the latest games coming out today. It was with this in mind that we began, many years ago, the development of heXen: Edge of Chaos.

Edge of Chaos is being developed by a team of fans who have always loved the original Hexen since it came out. In fact, most of us spent countless hours with the entire series. When id Software released Doom3, we immediately saw immense potential in the engine itself; the 'Hell' maps gave us the inspiration to make a hack-and-slash game based, primarily, on the original Hexen.

Our story ties into the expansion packs and also touches upon the Heretic narrative; especially the incredible atmosphere painted into these rich worlds and their darkling journeys. We are still looking for talented team members, so if you have some work to show and think you might be able to help us, make sure to drop us a line!

2013 was a slower than desired year. 2014 will not be. The year has kicked off with an excited vigor and focus which has the team pretty pumped. First, we welcome programmer Calavera_Jo to the team who has helped bring some of this energy into the team. Very talented and enthusiastic, he's already tackled a wide range of tasks from a refined blocking system to editor fixes to cleaning the environment of our code more.

The maps have continued to make progress as Caffeine Freak has become much more efficient in his terrain modelling. H2m2 is nearing it's completion of layout and detailing with game play to follow. Zurra has been taking care of some of our art needs. We still would love to add more members to our team (especially artists!), so if interested please contact us.

We'll be looking to assemble a small testing team once again with a current eye around late second quarter. More on that to come in the next few months. 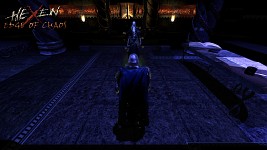 After a long silence, we bring some news and media on the current status of the project.

Progress report with information on our goals for next release.

Giving away Heretic and Hexen games via Steam for a random member of our Steam group.

Inside the zip package are instructions on how to apply the unified GNU Patch file to an unmodified Doom 3 SDK 1.3.1 installation on either Windows or...

This small patch enables users to play the game Hexen: Edge of Chaos Demo on a Mac OSX. This package only includes the universal DLL for OSX users. To...

Demo release of Hexen: Edge of chaos. Take the first steps as the cleric through his journey to Chaos.

I'm still so disappointed this game did not come out.

Please tell me, someday you will be able to complete the full version of the "Hexen: Edge of Chaos" mod or will it remain in the "demo version" forever ??

The greatest vaporware this side of the Serpent Riders' domain.
A wild goose chase meets pipe dream. Worse than that, while boasting Doom-3 tech, this flop can't even remotely compare to Hexen II. Bah.

there web page is down, might consider it dead

For anyone interested, 3D realms have announced a game called GRAVEN, it looks awesome, the spiritual successor to Hexen 2

That game is bugger-all. A mock imitation of the actual thing and a total cash-grab for its current price in early access. Not only is the game replete with bugs and technical glitches, but bears almost zero semblance to Hexen 2. The amount of content also does not warrant the price tag. Even the magic is used exclusively for puzzle solving and nothing else.

A lot of publishers are luring indie devs in order to make big bucks out of this whole "retro renaissance". Apart from Dusk, Amid Evil and Ion Fury, most of these callback retro shooter games are crude imposters claiming to be "spiritual successors" of the games they ape.

Absolutely spot on! That game is a pathetic travesty.
Not even in the same galaxy as the masterpiece Hexen II.

I saw it's only on early access, so was already hesitant to buy it. I really enjoyed Ion Fury though

Yep Ion Fury was great. So were Dusk and AE. But I can't recommend any of the other "retro shooters" to anybody in good conscience. My only wish is that somebody buys out Activision so that Raven can make their own games once more and not slave away on CoD DLC. I'd kill for an actual Heretic-Hexen reboot.

I've had enough of these cash grabbing retro shooters though. Thankfully the craze is now ending. The only retro themed thing I'm still awaiting is the Amid Evil Black Labyrinth expansion.

Guys , I think what you've done here is quite impressive. You've taken an aging engine and turned it to your advantage , rendering picture perfect recreations of the original Hexen environments and creatures. Hexen fans like myself will be welled up with nostalgia. The movement feels satisfying and the weapons pack a punch. You've done a great job of including all of the original hexen inventory items - all the flasks and so on look identical to their old school counterparts , with the added benefit…