Fallout Fixt exists to enhance, expand and improve Fallout and is an ongoing effort at:

Major or "non-canon" changes to the game by Fallout Fixt are usually optional during installation. If such changes aren't optional at the moment, they will be made optional in a future release.

- Click "CREDITS" on main menu will begin with Fallout Fixt credits, and displays current version.
- Version is also displayed in text at bottom of main menu. (May be hard to see at higher resolutions)

Source code and translations for Fallout Fixt can be found at Github.com - look for the "fixtsrc" and "fixtlang" repos, respectively.

This is the last planned release before switching to the Fallout 2 engine, beta stage. Quick overview of this release: lots of cool features from Crafty's update to the Sfall plugin, Fallout Fixt now installs to a subfolder to avoid overwriting any of your Fallout data, lots more text fixes, some crash fixes, fixes for some goofs I made, a few more options for Fixes Only custom installs, and fo1_screen_refresh is back. Oh and Fixt is on GitHub now.

1. "Friendly Foe" always on, without the Perk (via Crafty's sfall upgrade) 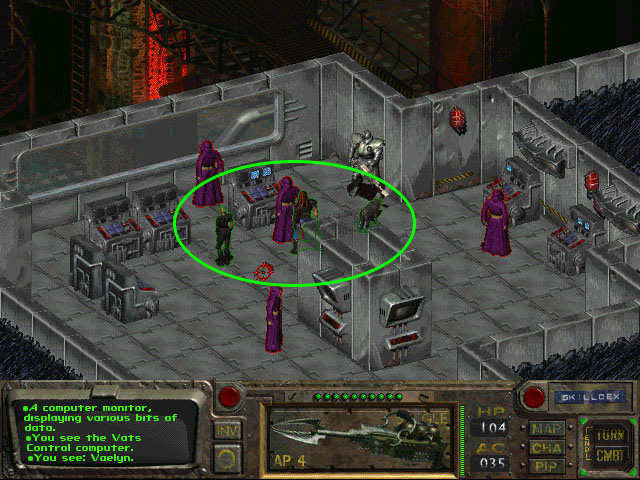 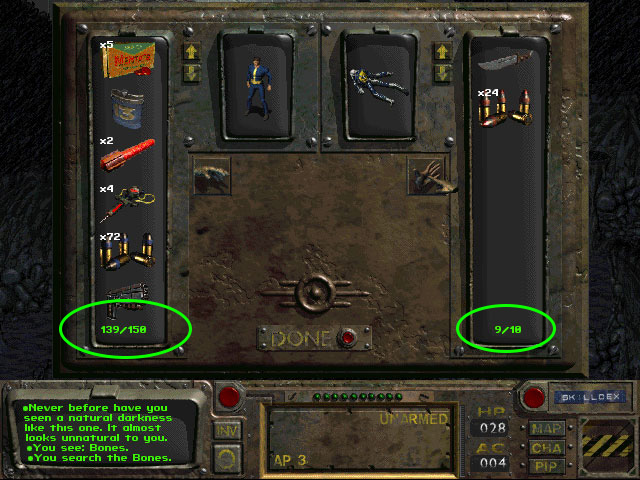 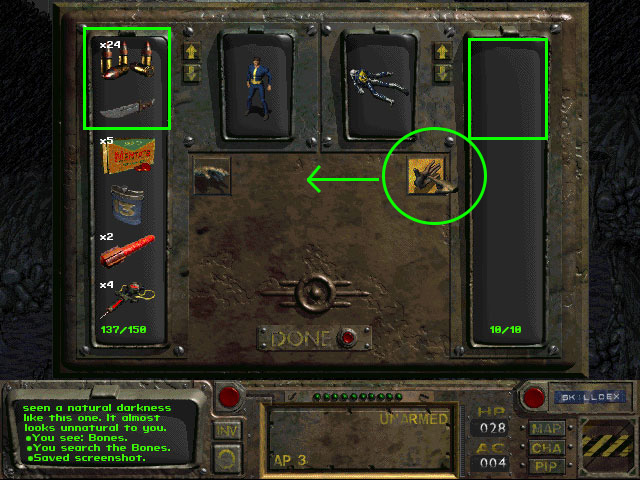 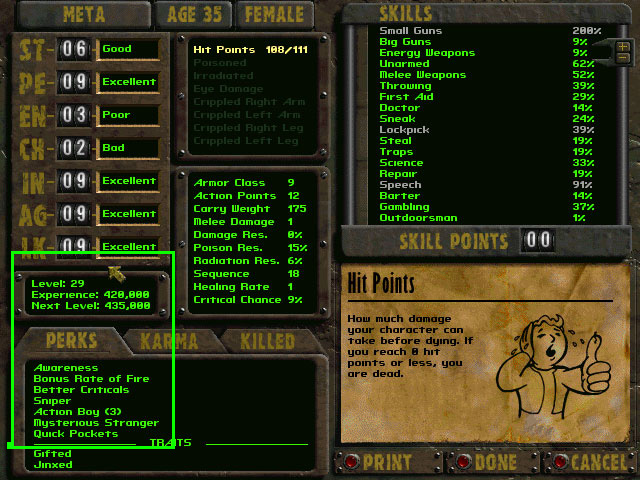 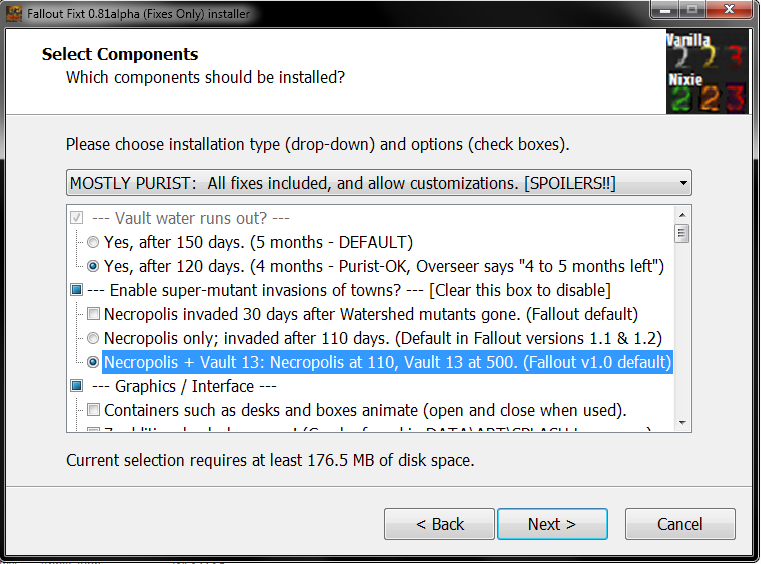 6. More installer options allowed for Fixes Only custom-mode: Level and Title on levelup. 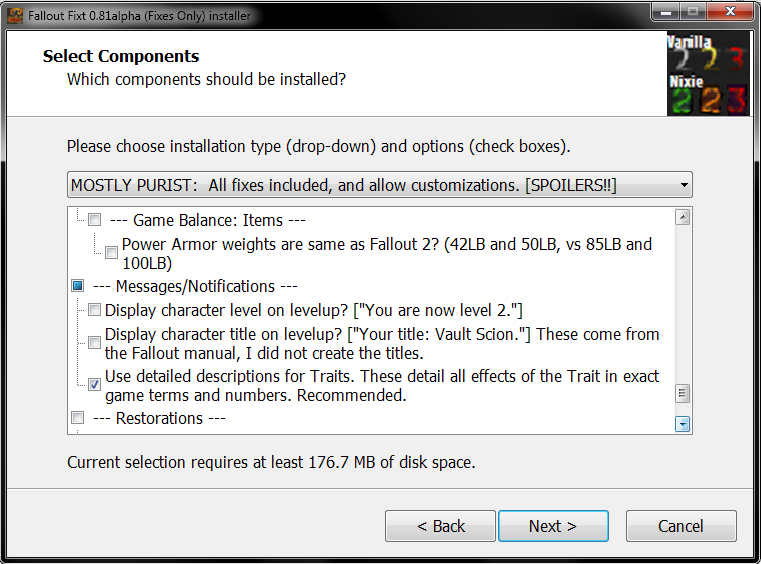 INSTALLATION
- Fallout Fixt now installs in a subfolder titled "Fallout Fixt" of where you tell it to install. (Thanks Lexx!)
-- This means you won't overwrite anything from your current Fallout installation. Hooray!
-- You still need to select your current Fallout folder as the install directory, because Fixt needs to know where to find the main data files.

- Fallout Fixt installer no longer backs up savegames during install. This was causing issues on some systems.
-- The silver lining is that since it's being installed in a subfolder now, your original savegames will stay untouched regardless.

FIXED
- Fixed crash when giving holodisk to Jon Zimmerman.
- Razor no longer dissapears forever.
- Fixed crash moving items between containers in inventory. (Thanks Crafty!)
- Talius' dialog options regarding the spy are now available as they should have been.
- No more broken Start Menu links.
- Display of title and/or level on levelup now works properly on Fixes Only installs.

EDITED
- Updated troubleshooting guide, and added index to top of file.
- URLs for Troubleshooting Guide and Changelog now open the file directly as a download rather than with Dropbox's file viewer.
- More text & dialog changes/fixes. 200+ files modified. (Thanks robbforce!)

ADDED / UPDATED
- Now has the most current files for Katja's graphics.

- Additional options available in the Fixes Only download's "MOSTLY PURIST" custom install:
-- Display player's level on levelup
-- Display player's title on levelup (Titles are from the Fallout manual)
-- Restore Vault 13 invasion of after 500 days (Default in Fallout v1.0)
-- Days Left for Water Chip can be 120 instead of 150. (Overseer says "4 to 5 months left" in the intro movie)

- Includes ddraw (Sfall) version 1.19, by Timeslip & improved by Crafty. This plugin provides many graphical and game enhancements and features, which are customizable, including the following and many more:
-- Hold down Shift to highlight items and containers on-screen.
-- Various commands can be bound to keys or key combinations. (All are disabled by default)
-- Can no longer press zero (0) to force-exit dialog.
-- Fixes for high CPU usage.
-- Display karma changes in the message box. (Disabled by default)
-- Buttons with "Take All" function similar to Fallout 2.
-- Remove inability of Vault Dweller to get critical successes or critical failures in the first few days of the game.
-- Doors can no longer dodge bullets.
-- Shows free weight as well as total weight in Barter and Inventory screens.
-- Can no longer use drugs to cheat with skill-gain books and getting Perks you shouldn't have access to.
-- Can no longer use the "A" key to run forever for free in combat.
-- Leveling past 21. (Disabled by default of course)
-- Friendly Foe functionality is now default and the Perk is removed from the game.

- Fixed crash upon ending dialog with the dying mutant.
- Fixed some installer options that weren't working as intended.

POTENTIALLY FIXED
- Made a change to attempt to fix an issue where Vats self-destruct timer would always set to 0 (instant), regardless of option chosen.

REVERTED
- Reverted an attempted fix of empty caravan encounters, that unintentionally caused *more* empty caravan encounters. :(
- Reverted 2 fixes/changes that caused unintentional issues gaining access to the Vats Control Computer.
- fo1_screen_refresh is once again included.
- Weapon Drop Mod no longer enabled by default on "Standard" and "Full" installations. My sincere apologies, I thought I already reverted this in the last release.

REMOVED
- Removed debug message that displayed if player was accompanied by Brotherhood of Steel Assault Paladins.

DOCUMENTATION
- Added steps to Troubleshooting Guide regarding inability to save games, sound issues, and "Not enough disk space".

BUG REPORTS POLICY
- All bugs, ideas, and feature requests are to be reported at the Fallout Fixt bug reports wiki at Falloutmods.wikia.com
- Bug reports entered on forum threads (RPGCodex/NMAFallout/GOG/Steam/etc) will no longer be considered 'official bug reports' for the following reasons:
-- EASE: It doesn't require registration and shouldn't take much longer than it would to post it on the forum.
-- EXCLUSIVITY: You're robbing the ability to interact with your bug report from people who don't visit that forum.
-- DUPLICATE WORK: Someone (usually me) has to to personally go through all the threads to add them to the wiki.
-- HUMAN ERROR: It's easy for thread-post bug reports to be accidentally overlooked or forgotten.
-- EFFICIENCY: It results in duplicate reports and requires cross-referencing multiple sources.
-- TIME: It's in everyone's best interest for me to spend my time focusing on actually fixing the bugs.

The same as "Full Custom", but for those with German version. 280 MB to download, up to 700 MB installed (if all options selected). Restores censored...

The full mod. 200 MB to download, up to 540 MB installed (if all options selected). All content is available. Available installation types: Fixes Only...

The "patch". 90 MB to download, up to 150 MB installed (if all options selected). Some new content available. Good for purists. Available installation...

Are you planning on resuming work on this mod, or is done for good?

Any intentions of making a Fixt version for Fallout 2 once this one is done?

Hello how can i disable the level cap?
I picked the custom instalation and got to level 21 and thats it.

ok i did figure it out.:) you need to edit the line in ddraw.ini

Files section on this page ;)

file is contaminated with a virus.

It shouldn't be. What virus was claimed to be in it and which antivirus software are you using?

3 years since the last release. Is this mod dead ? It's super buggy in his actual state and it's a shame because I like all the improvements it brings to fallout.

It's not dead, I just have had a rough time the last few years. Rest assured I plan on continuing development and releases of Fixt :) And I agree, the bugs in its current state are very disappointing.