As grotesque and ludicrous action hero, discover dark secrets of the White castle. Outsmart slippery Hermann the Gross. Pursuit descendant of El Oscuro in new chapter of the H.U.N.T. history.

Today marks a significant date in Rise of the Triad history. Realms Deep 2022 show included ROTT: Ludicrous Edition announcement. What's even more exciting, lost content from early builds such as cut enemies is being restored and placed back into the game. After many years we'll finally get ROTT as it was originally envisioned, without compromises caused by slow processing speeds and memory limitations.

Since there's an interest in early builds of Apogee and 3D Realms games and ROTT in particular, I decided to talk about early versions of Extreme Chase. And what could be a better time for this other than Realms Deep? This add-on has quite a history with the event: it was originally released as part of Realms Deep 2021 Map Jam (did you find the Mega Secret Area with Realms Deep logo?)

Jan 26 2020. The park construction has just begun. The table from "Turning Tables" scene is already placed. That scene is to be implemented, and it's part the plan right from the beginning!

Shore and distant landscape are pretty similar to v0.95 release. 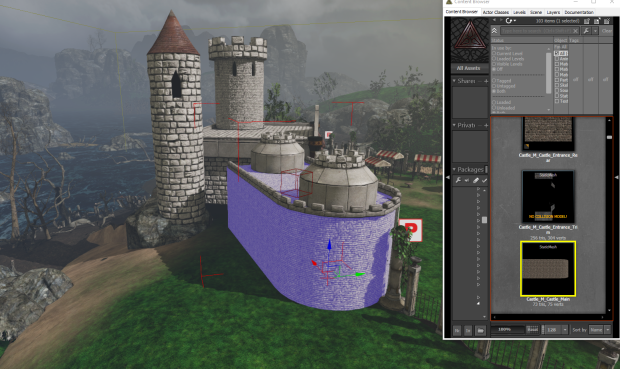 Castle interior doesn't exist. The highlighted part is a static mesh which was later rebuilt from brushes to make it possible for the player to be inside it. Also the castle is too small and to be expanded.

What is the timestamp of Extreme Chase's earliest surviving build? It is hard to guess, but here's a hint: earlier than you think. Years earlier.

It never went past this small test map with sky, grass texture and birch model. The plan was overly ambitious, including three big levels: huge park with high cliffs, big building to explore and the Triad's underground base which gets destroyed in the end and player runs away from rising lava.

That would take years to make.

And the name was different back then: Infested Park.

Nevertheless, some ideas from that plan made it into Extreme Chase. The "Turning Tables" scene. Hermann The Gross' introduction. In the end he was supposed to pursue the player into a building and then be crushed by a signboard that falls on him when he goes up the entrance stairs.

Latest playable build of finished Extreme Chase is right here for you to try:

In one of the future Developer Diaries other early builds will be examined, the ones which are closer to completeon than the two we've seen today. Thank you for your interest in the add-on and its history.

An update to the pursuit of El Oscuro descendant with bug fixes and new content.

The next version is out of the planning phase and its development is going full sail!

v0.98 adds detailing and gameplay to the beginning of the level, introduces working completion % counter and other bug fixes&improvements;.

v0.95.1 fixes prominent issues of Realms Deep 2021 release and is only a first of few planned updates.

This is really cool. I didn't know people modded this game.

Rise of the Triad

A Week In Paradise: Re-Delivered POSTAL 2