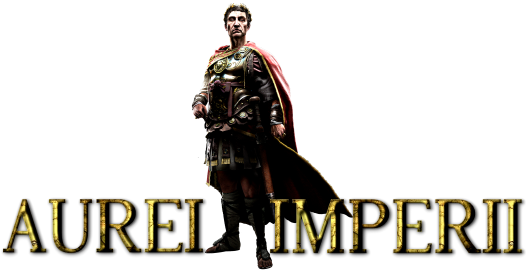 Aurei Imperii is a mod set at 150 BC during the late Roman Republic. As of now THERE ARE NO REAL TIME BATTLES, on encounter battles are auto-resolved automatically by script.

- Go to AI_v09 folder, right click on the Executable file and chose "Create shortcut" and move the shortcut to the desktop.
- Copy/paste the icon that is also in AI_v08 folder to the desktop.
- Right click on the shortcut you created, chose properties and "Change icon...", then chose "Browse..." and then chose Desktop, you should have the icon there, just chose the icon.
- Rename your shortcut to whatever you want, for example: Aurei Imperii
- You can now launch the mod always from your desktop.

This is a "lite" version without the immersive hd cinematics as they're over 2Gb. This is for people who either have a slow internet or just don't care...

Released a "lite" version without the immersive hd cinematics as they're over 2Gb. This is for people who either have a slow internet or just don't care about the videos. I've added old Rome TW videos for wonders and victory. This file is just 661mb so no reason to not try the mod ;)

Is it suppose to auto battles or did i do something wrong?

NOTE:
As of now THERE ARE NO REAL TIME BATTLES, on encounter battles are auto-resolved automatically by script.

There was still a lot more I intended to do in this new version (new factional ancillaries, unique game mechanics for Senate and the Roman families, etc) but can't do nothing more atm.

NOTE:
As of now THERE ARE NO REAL TIME BATTLES, on encounter battles are auto-resolved automatically by script.

I've been making a huge overhaul to this mod. Overhauled AI and diplomacy, also overhauled economy, added new scripts, added tons of unique historical buildings with historical info and some new buildings to build (still looking into adding more, replaced all info images (everythingis now more or less in the same style and no more Rome TW stuff), also overahuled some building icons, added nice intro cinematics and replaced wonders and victory videos, leveled all audio so that all volume is more or less at same level, added an extra culture slot for Odrysian Kingdom so no more charing culture with Greeks. New version shall be released soon.

I'm now working on an update for this mod. I'll implement the AI and the other game mechanics tweaks I've done in my other 2 mods. I'll also fix all little bugs I'm aware and make overhaul improvements to graphics and audio. Maybe expand on some gameplay mechanics and add some new stuff.

This looks like a great mod, even if still without proper battles - the main campaign is complex enough that it allows for an enjoyable experience. I did a small test run with Carthage, everything runs incredibly smoothly. The only issue I encountered so far (20 turns) is that the Numidian AI was very quick to sign peace twice. (They never bothered to besiege any of my cities, even when my forces were far away). Also, the Romans only blockaded some of my ports (despite the Cornelii invading neutral Cyrene!)

This was on Medium difficulty, but even so. I play on Medium because I don't like suicidal AI, but perhaps Hard is necessary here?

All in all, great potential!

Well, tweaking Med II ai is complicated because if you try to make it use a bit more diplomacy it can be exploited, but is either that or full war like in vanilla. Increasing difficulty like in vanilla will make things harder ofc, especially 1 thing to keep in mind is that ai get bonus on auto resolve unlike in normal difficulty where it plays by the same rules as the player.