11:59 is a total overhaul mod that focuses on historical accuracy as well as gameplay. Basically everything has been changed or altered, save for the core game mechanics or unmoddable pieces of the game. The feature list includes a brand new Decisions mechanic, (this will popup if your country has decisions scripted for it), a DEFCON mechanic (which is still work-in-progress), map changes, such as the 38th parallel in Korea (pictured below), West Berlin; canals, such as the Kiel Canal, the Panama Canal, and the Suez Canal. A brand new interface has been implemented. The soundtrack has been completely redone, and the list of tracks expanded to 52. There are now ~100 events, some of which are events that influence the AI's decisions (these events only popup for the AI, never the player) to ensure that it stays somewhat historical within the supported scenario: The Bear And The Eagle. Even more features such as custom province pictures for certain cities, the United Nations, and states and regions are also mentioned below. 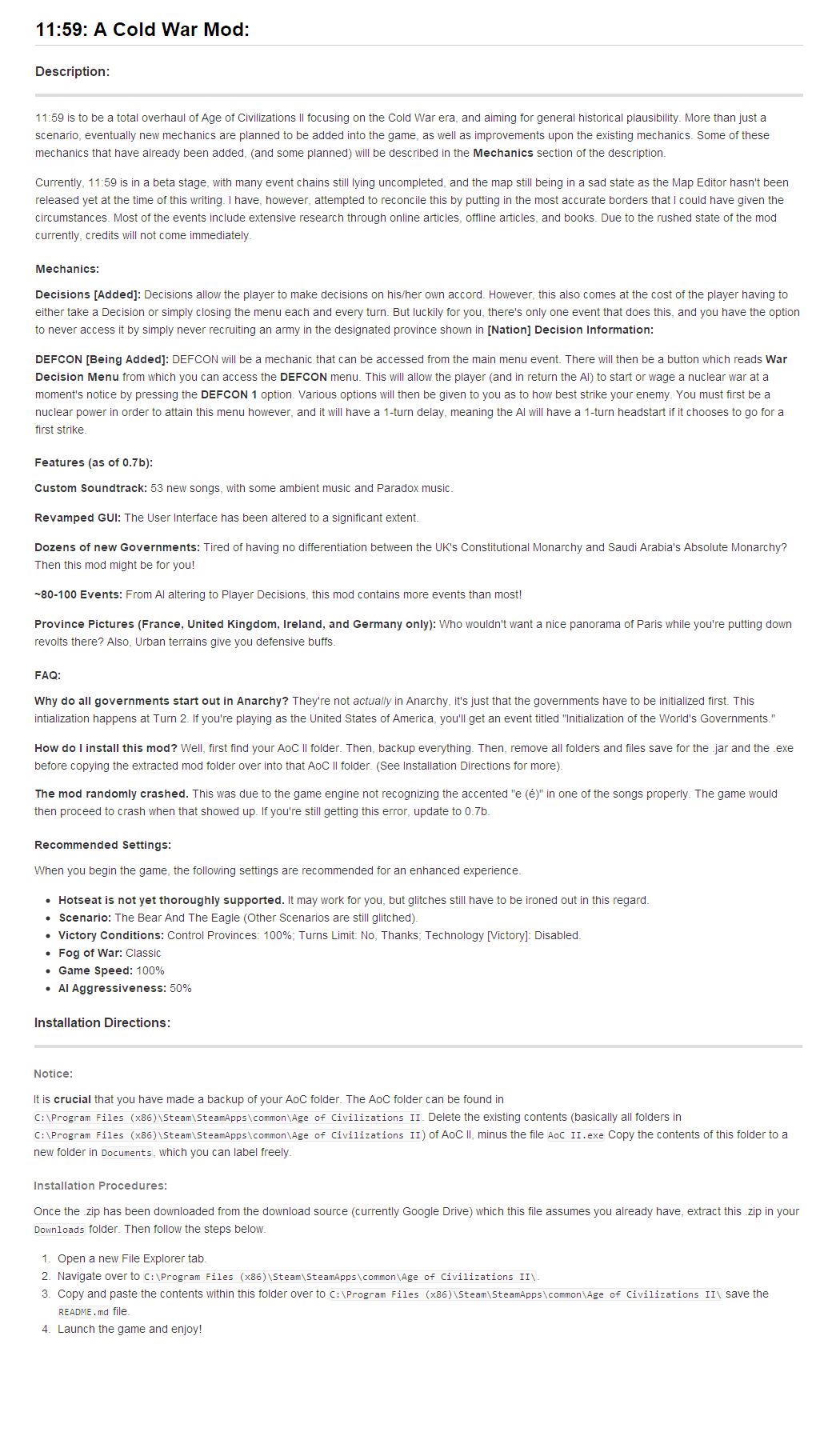 On The Future Of The Mod

So firstly, if you've still stuck with me and my mod until now, congratulations! I haven't been the most active on ModDB, which is why I recommend you join my Discord here: Discord.gg. I'll be updating the mod every now and then, but I won't be updating the AoC II version on a regular basis.

After tinkering with East vs. West, I've come to the realisation that the game in its current stage is simply too volatile, and after an attempt at modding the game, it began to crash. As such, all modding efforts in that direction have been halted.

British decolonisation events have not yet been fully completed in the latest development build, and localisation may not yet be fully ready. As such, it is advised to report any such glitches or bugs to Vis#5102 on Discord, or via email at vistacitus@gmail.com.

A new development build has also been released. Make sure to check in the 'files' tab.

Moving the Mod to East vs. West: Here's Why

The mod has moved! Why? What are the main causes for this change? Will the AoC2 portion of the mod still be maintained? Find out here.

11:59 - 0.9b: The Sun Finally Set has been released along with a launcher for Age of Civilizations II! There might still be bugs that we need to quash...

This is a development build, so download if you wish to keep up with the most recent development. Due to previous concerns over 0.86b's glitches, 0.87b...

A development build. If you really want to be caught up on stuff, download this I guess. Expect bugs.

The Concert of Europe: Roar of Industry Victoria 2: Heart of Darkness