Guide to performing the colony to state exploit and craftsmen glitch

Here I will explain how to turn some large population colonies into states without having to get 1% accepted culture bureaucrats for the entire state and also one way to perform the craftsmen assimilation glitch in Victoria Universalis. I will be performing these tricks as Denmark on the colonial state of Ghana. 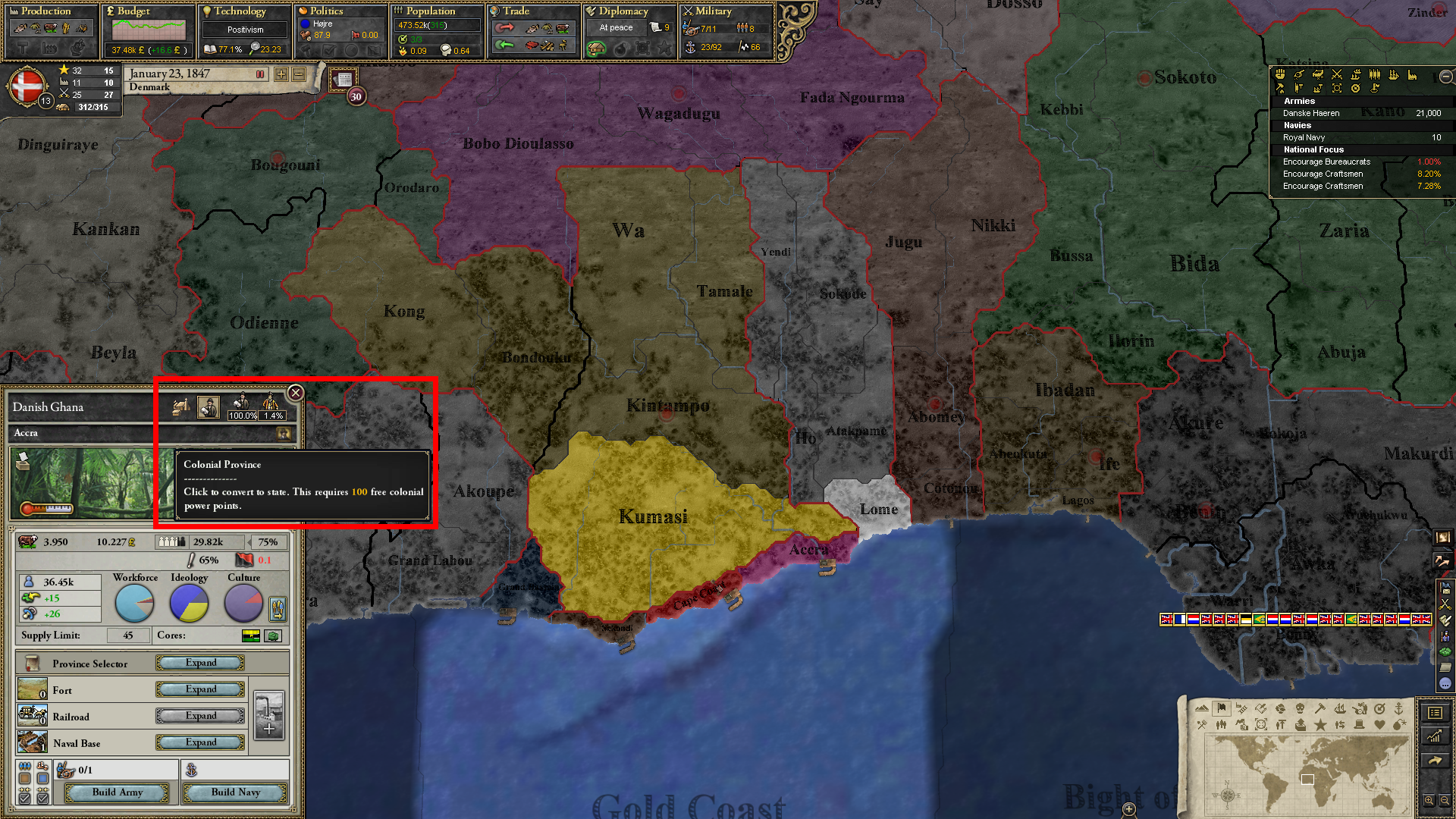 Turn the Danish part of Ghana into a state by the colonial policy there to settlement and reaching the 1% accepted culture bureaucrat threshold in the state. Even with Denmark's small starting population of 400k, I was able to accomplish this by 1847 because the province of Accra only has 35k starting pops.

Step 2: Annex the rest of Ghana. 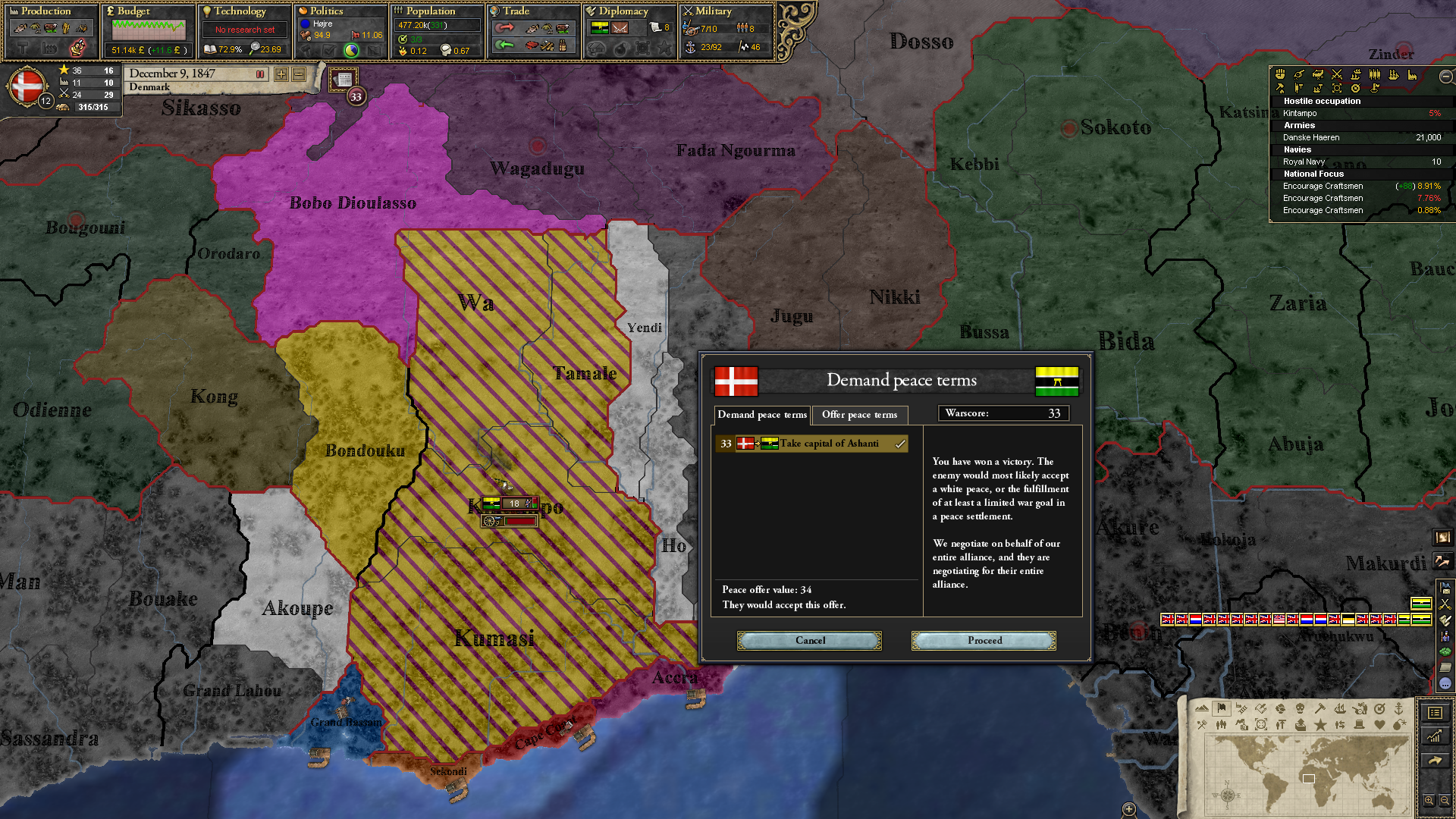 After I turned Danish Ghana into a state I annexed the rest of Ghana from uncivilized Ashanti. 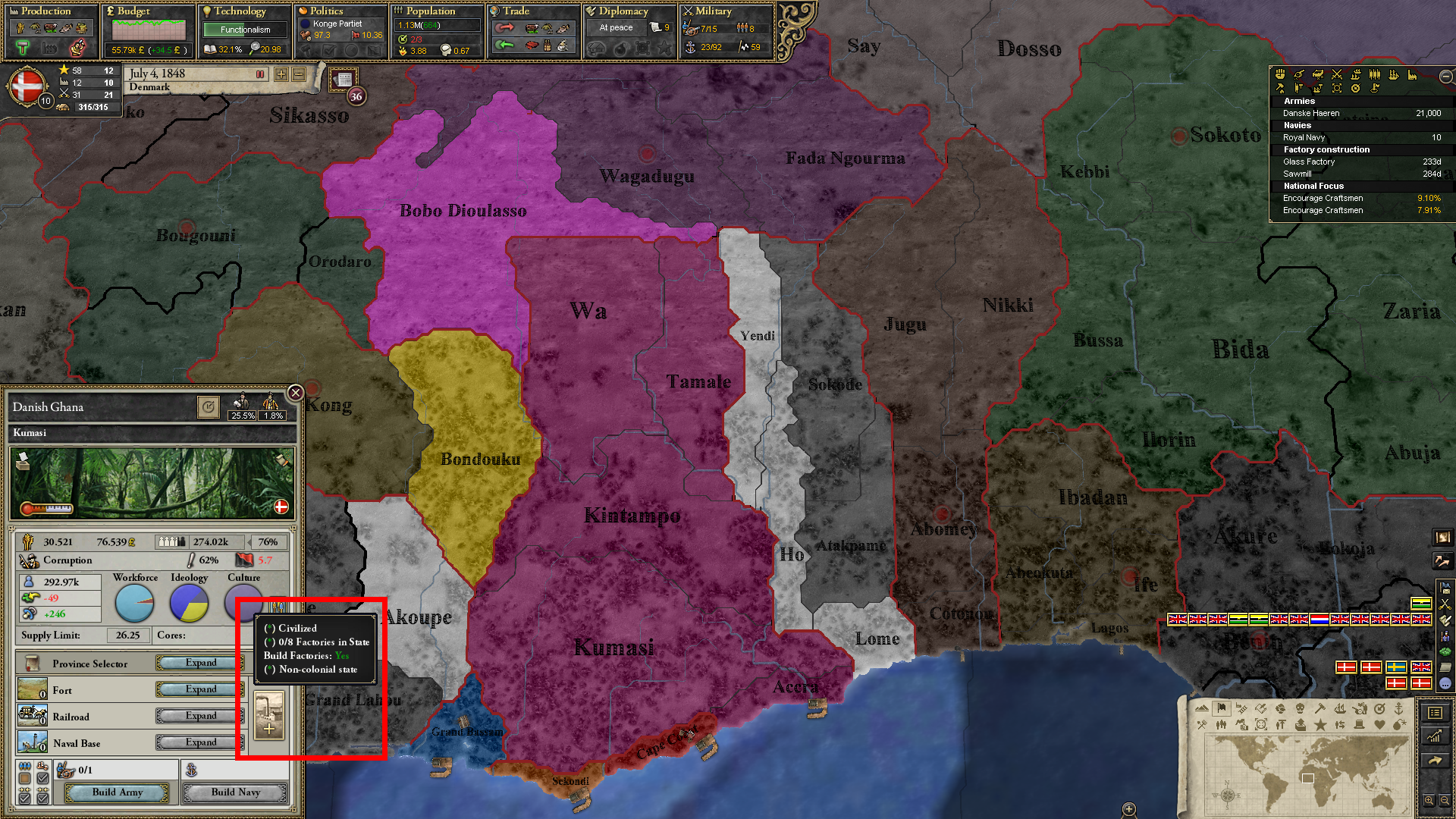 Even though Ashanti was uncivilized, the rest of Ghana became a civilized state after I annexed it from them. In Victoria 2, if you own part of a state and annex the rest of it in a war later, it will always become a fully civilized non-colonial state if the part you owned was a non-colonial state at the time of annexation. The reverse is also true, if you own part of a state as a colony and annex a non-colonial part of it later, the entire state will revert to a colony. 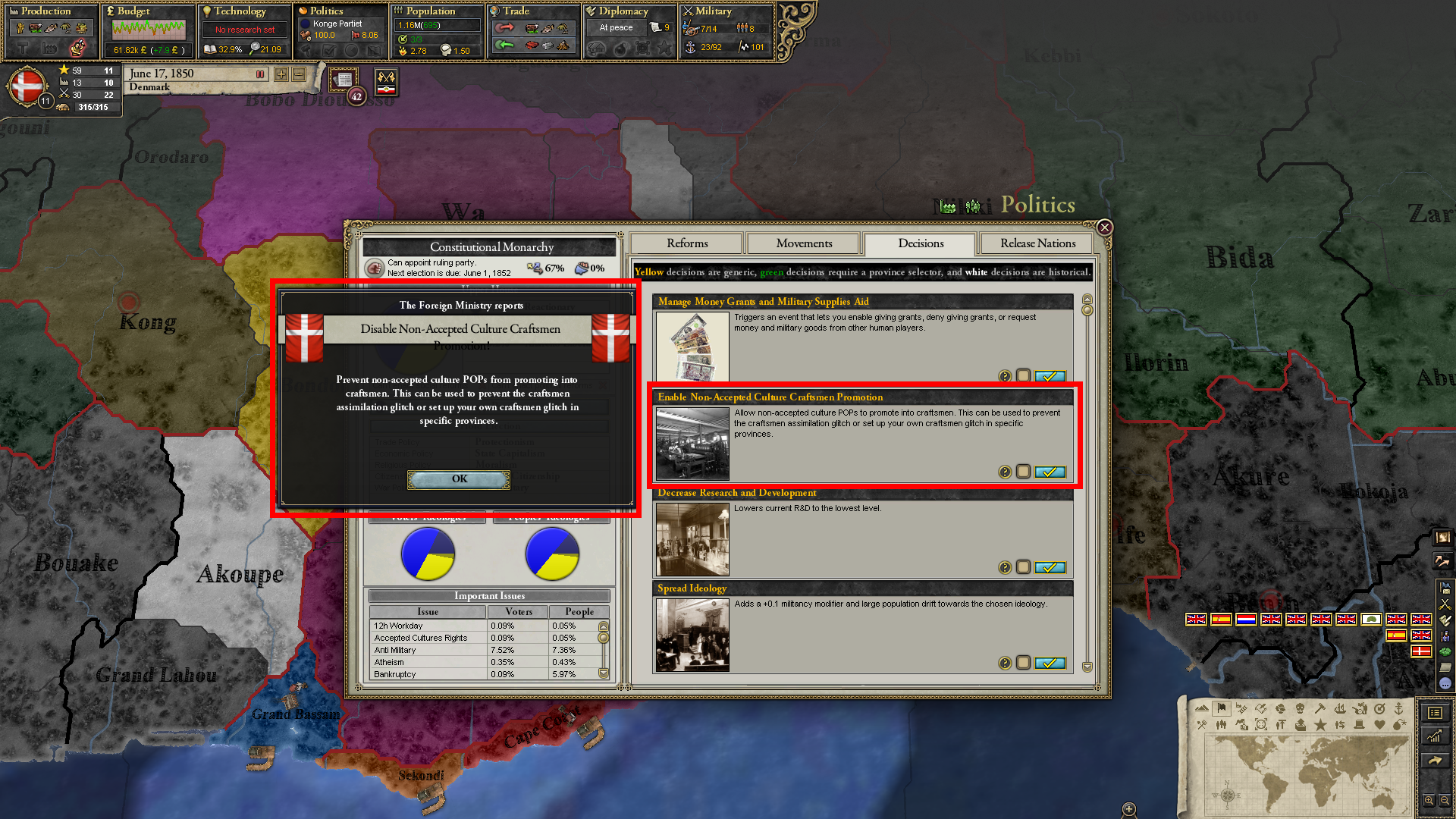 This prevents any non-accepted POPs from promoting into craftsmen. This is important because if a single non-Danish POP in Ghana becomes a craftsmen, this glitch won't work.

Step 2: Use the province selector to direct migration to Ghana and use a national focus to promote farmers in Ghana until each province has over 100 Danish farmer POPs and there's an open factory in the state with no craftsmen POPs. 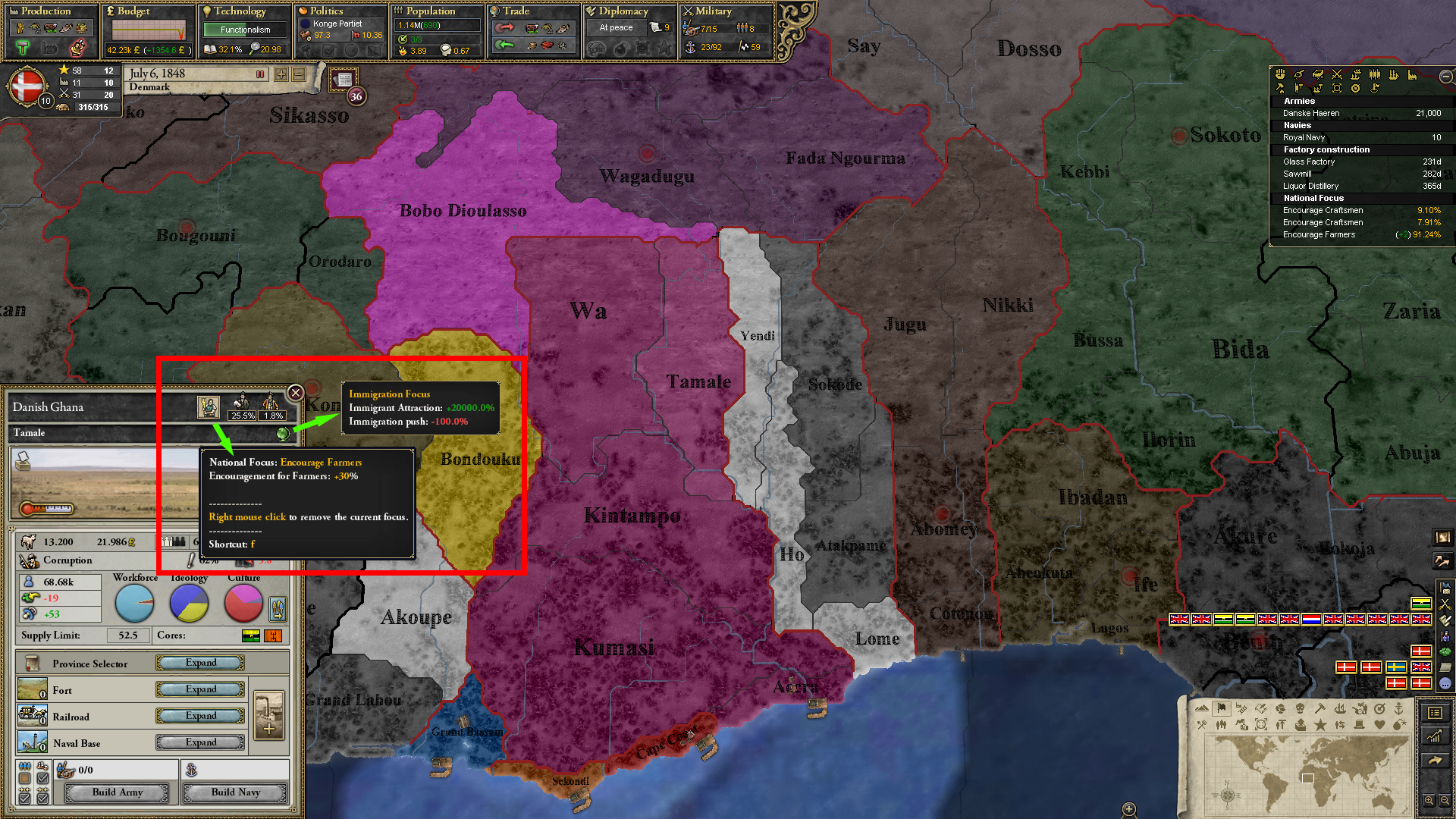 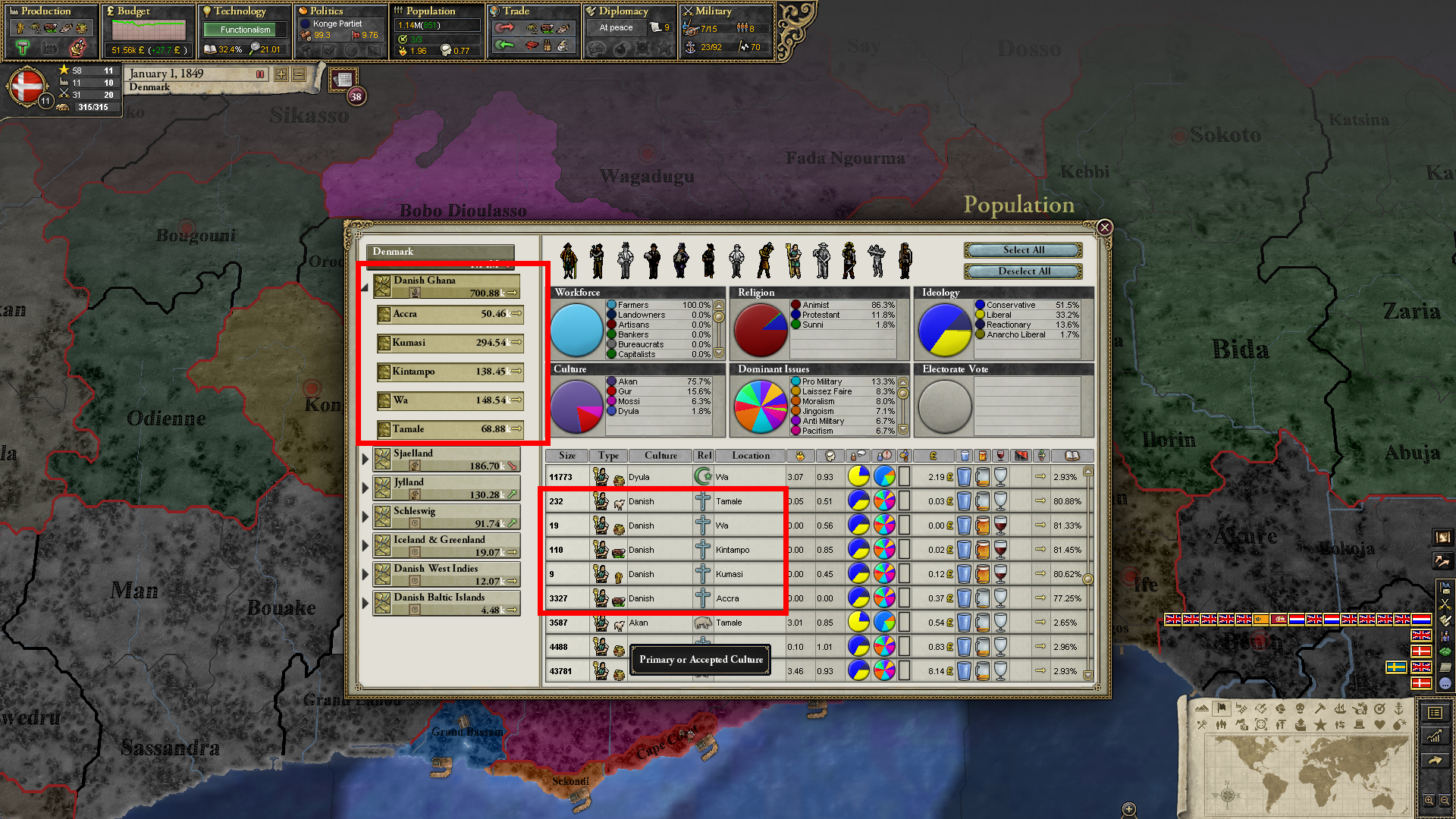 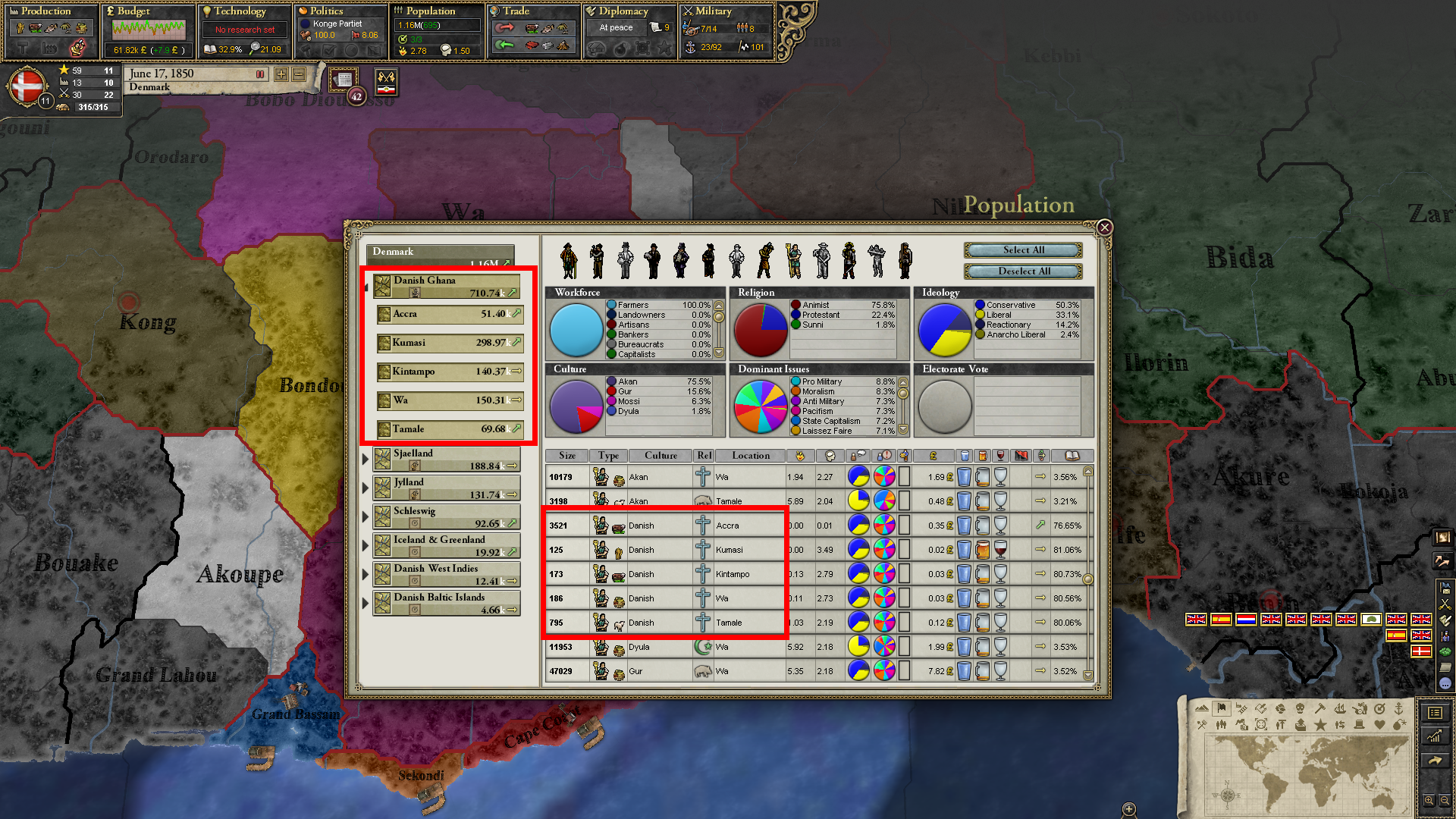 It is important that you do not stop promoting farmers in Ghana until you have over 100 farmer Danish farmers in each individual province in Ghana. If any Danish farmer POPs in Ghana fall below 100 population, there's a chance they will merge with other non-accepted culture POPs and you won't have any more Danish farmers in that province.

Step 3: Promote craftsmen in Ghana until you have at least 1 Danish craftsmen POP in each province. 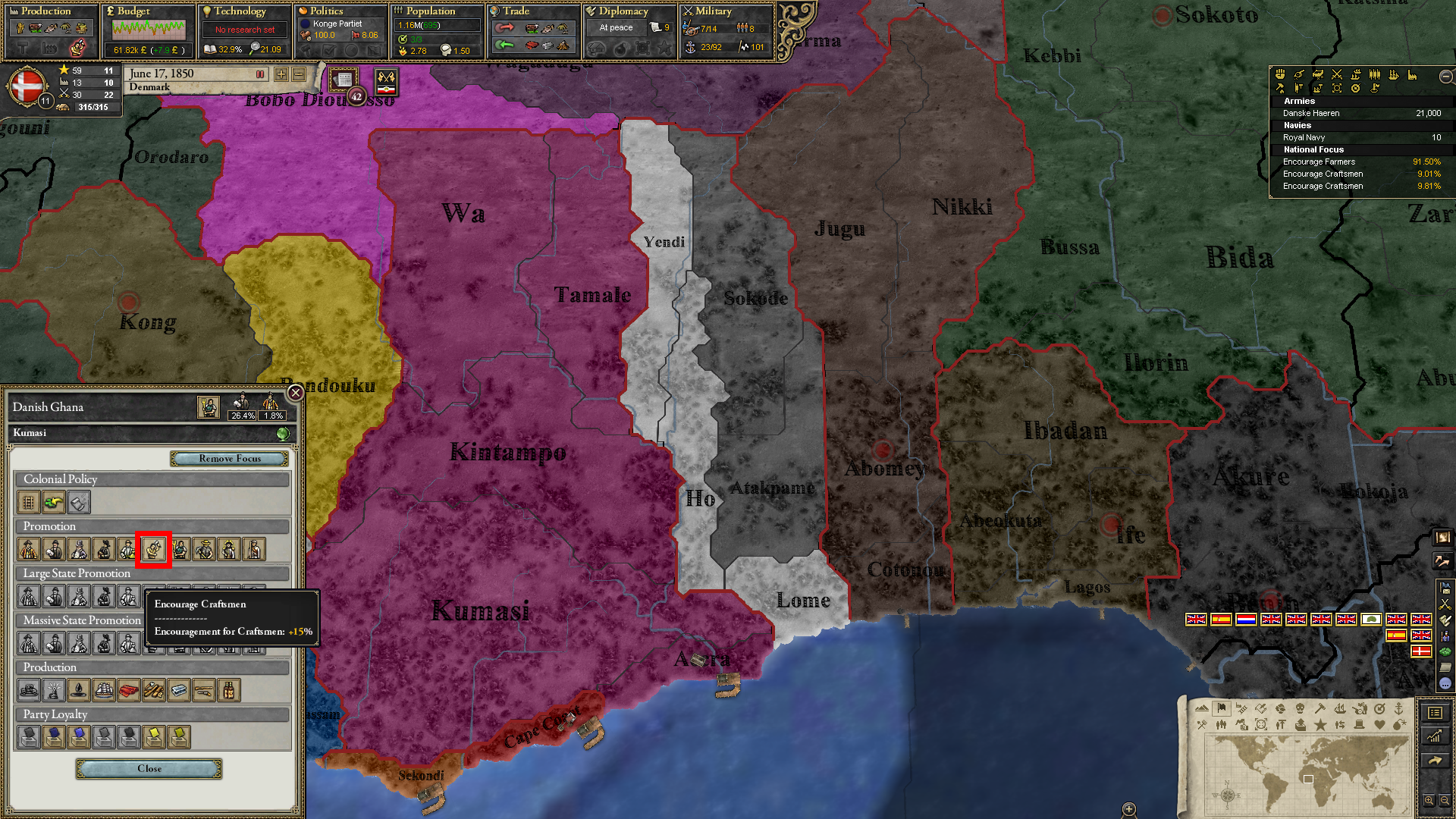 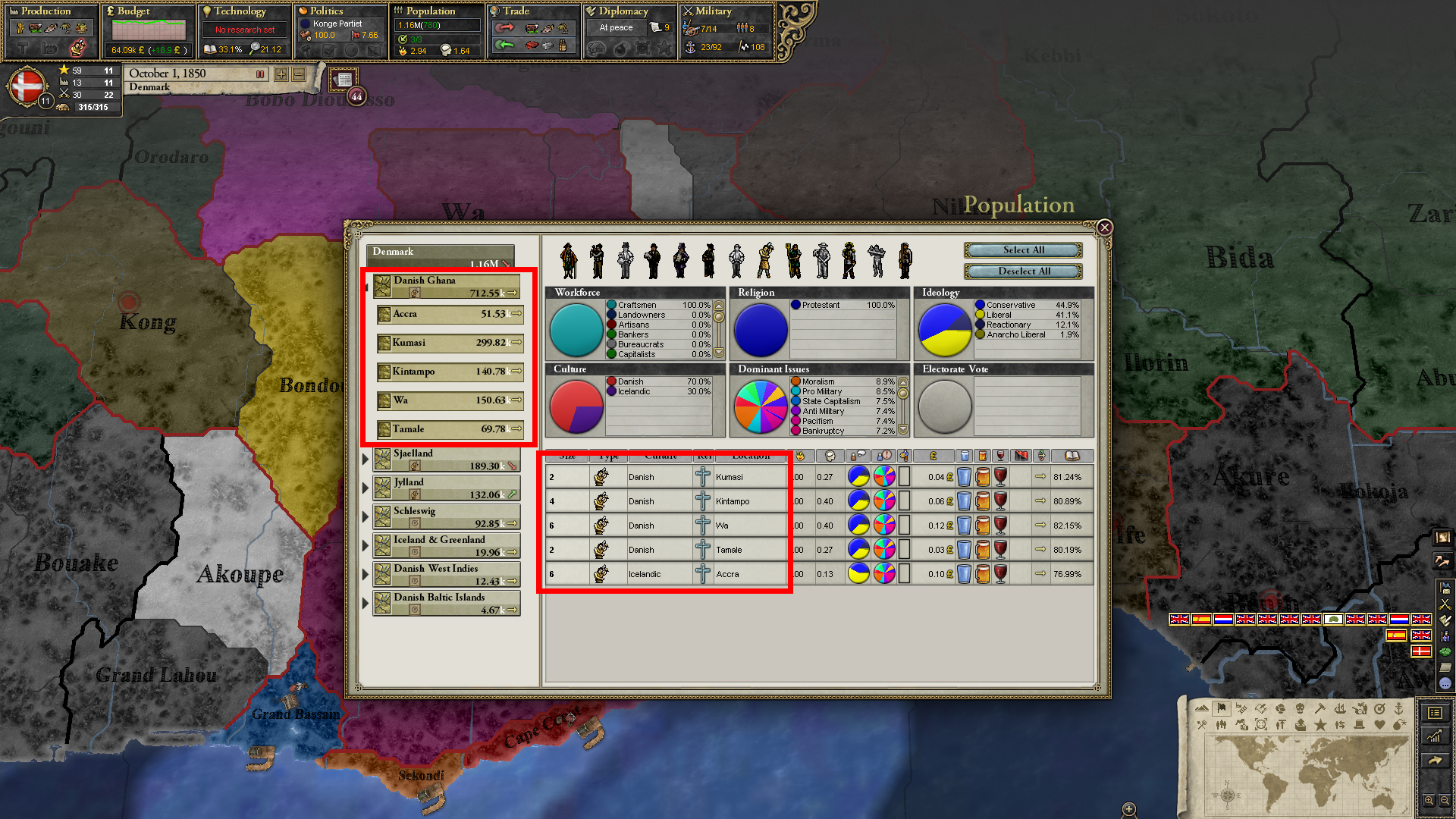 It doesn't matter how big the POPs are, you just need 1 in each province. 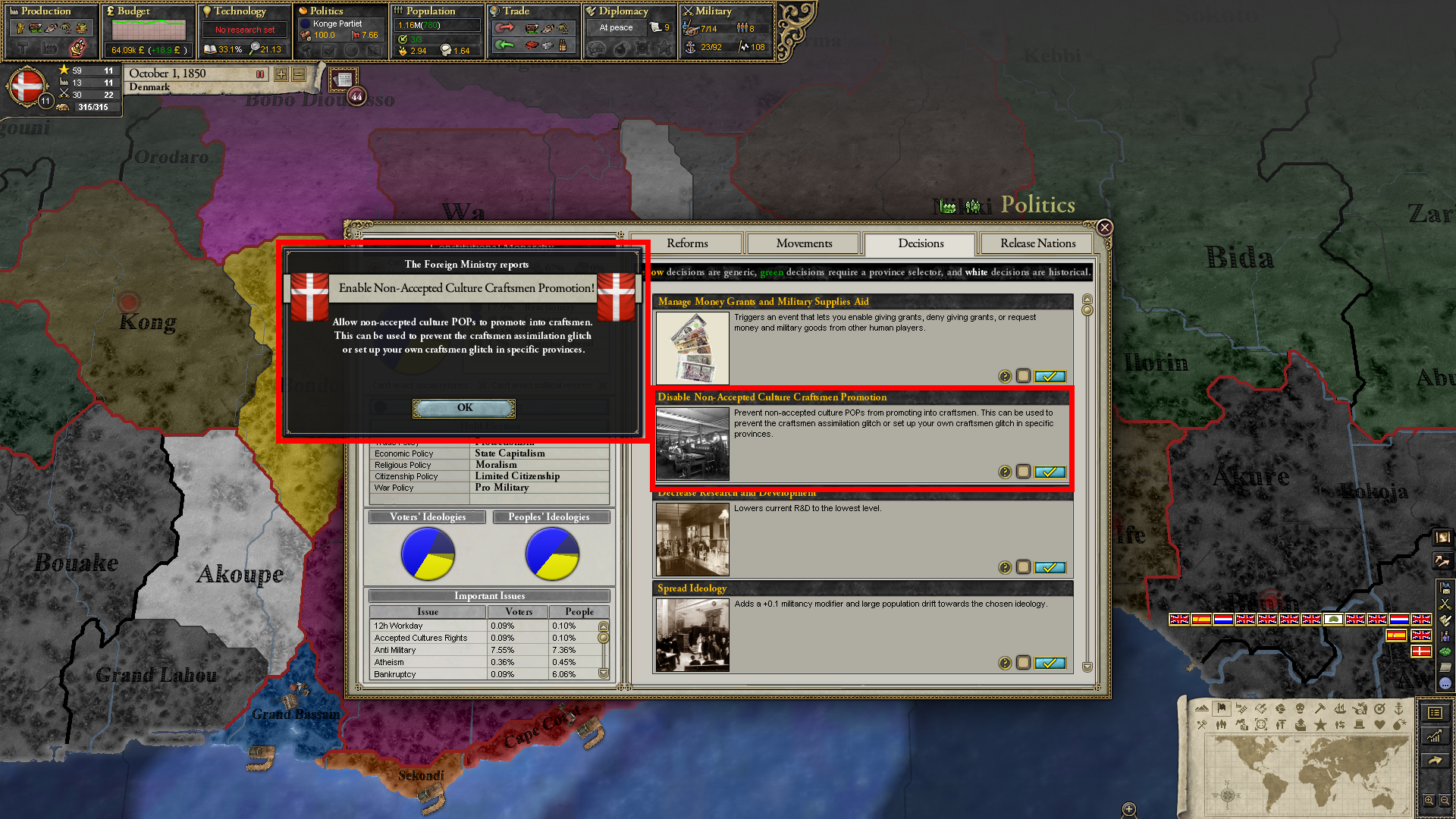 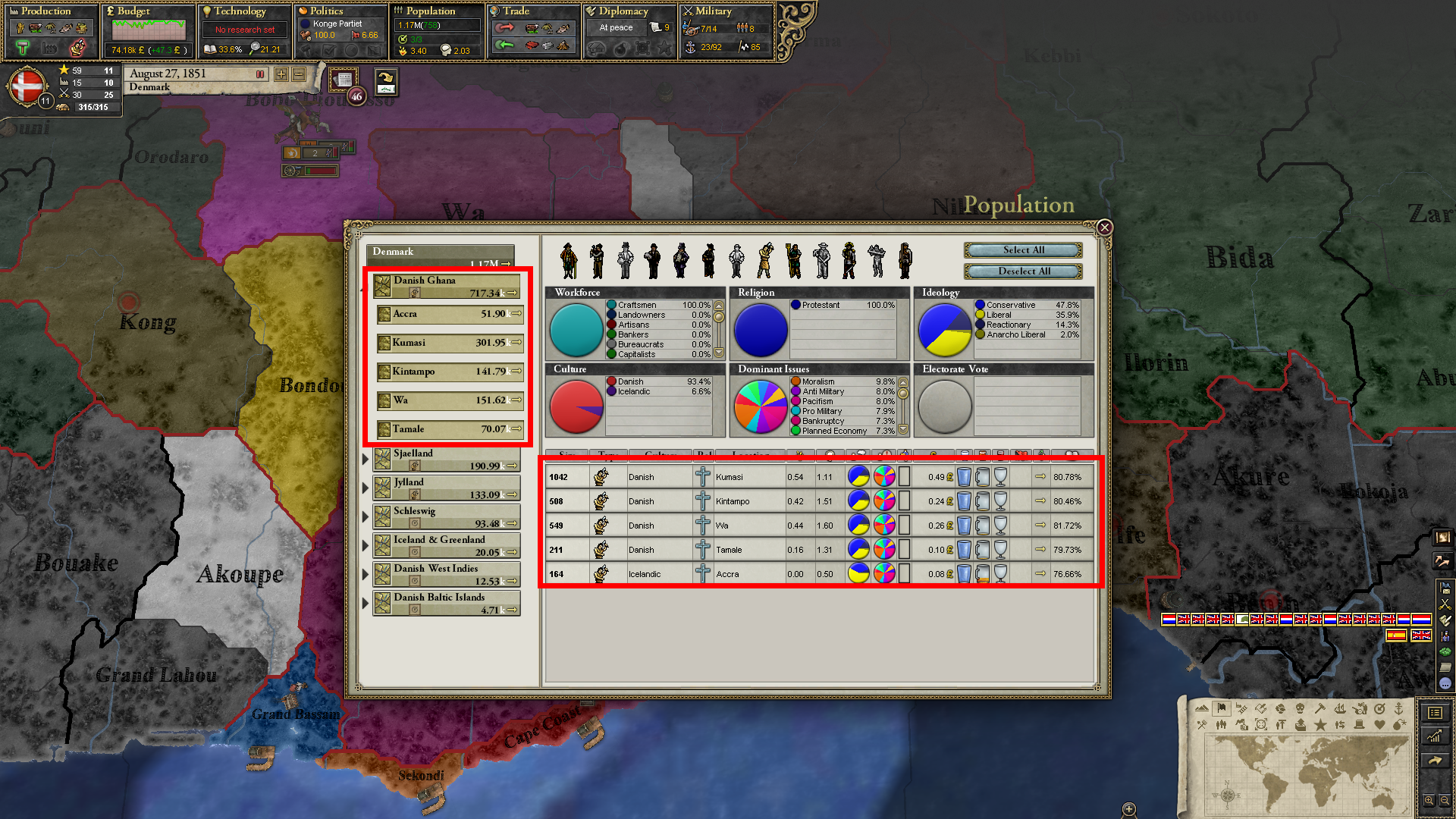 The second way to perform the craftsmen exploit only works if you have a large number of accepted culture craftsmen in your other provinces. It is simpler and involves fewer steps than the 1st method.

This step is the same as before.

Step 2: Use the province selector to direct migration to Ghana and promote craftsmen in Ghana until you have 1 danish craftsmen POP in each province. 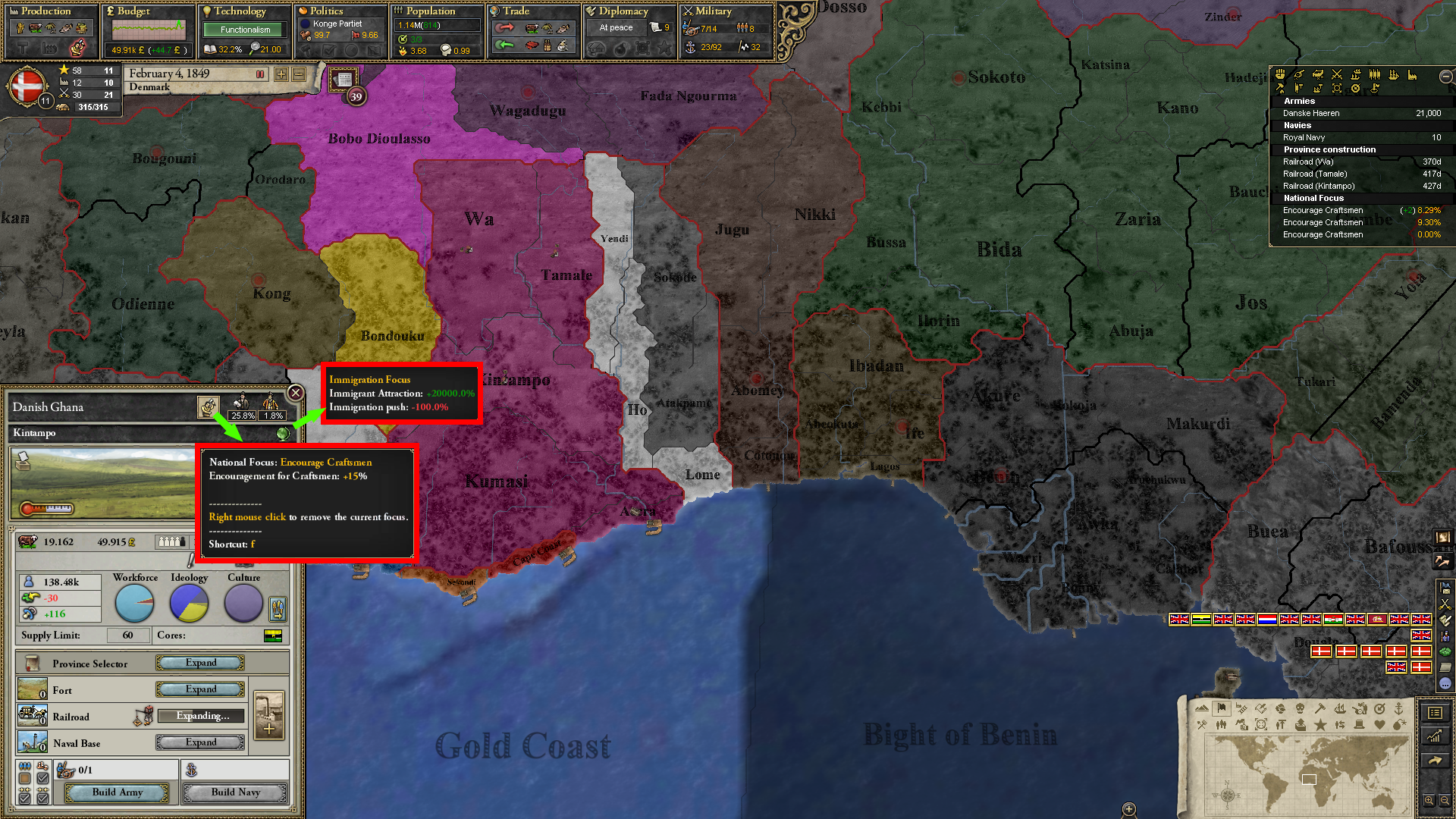 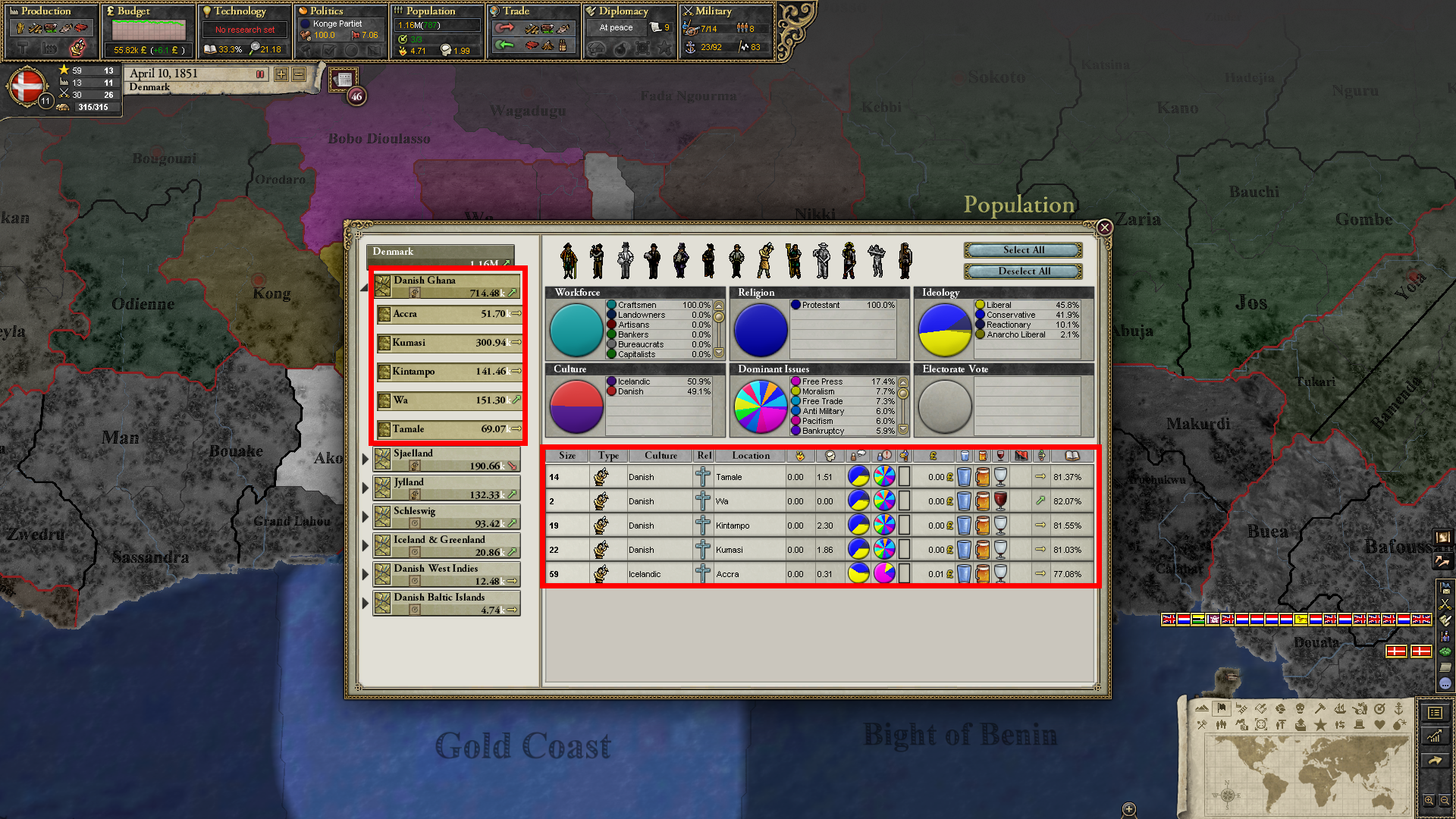 Even though we don't have any Danish farmer POPs in Ghana, the migration attraction province selector decision will eventually fill each province with a small amount of Danish craftsmen POPs from Denmark. 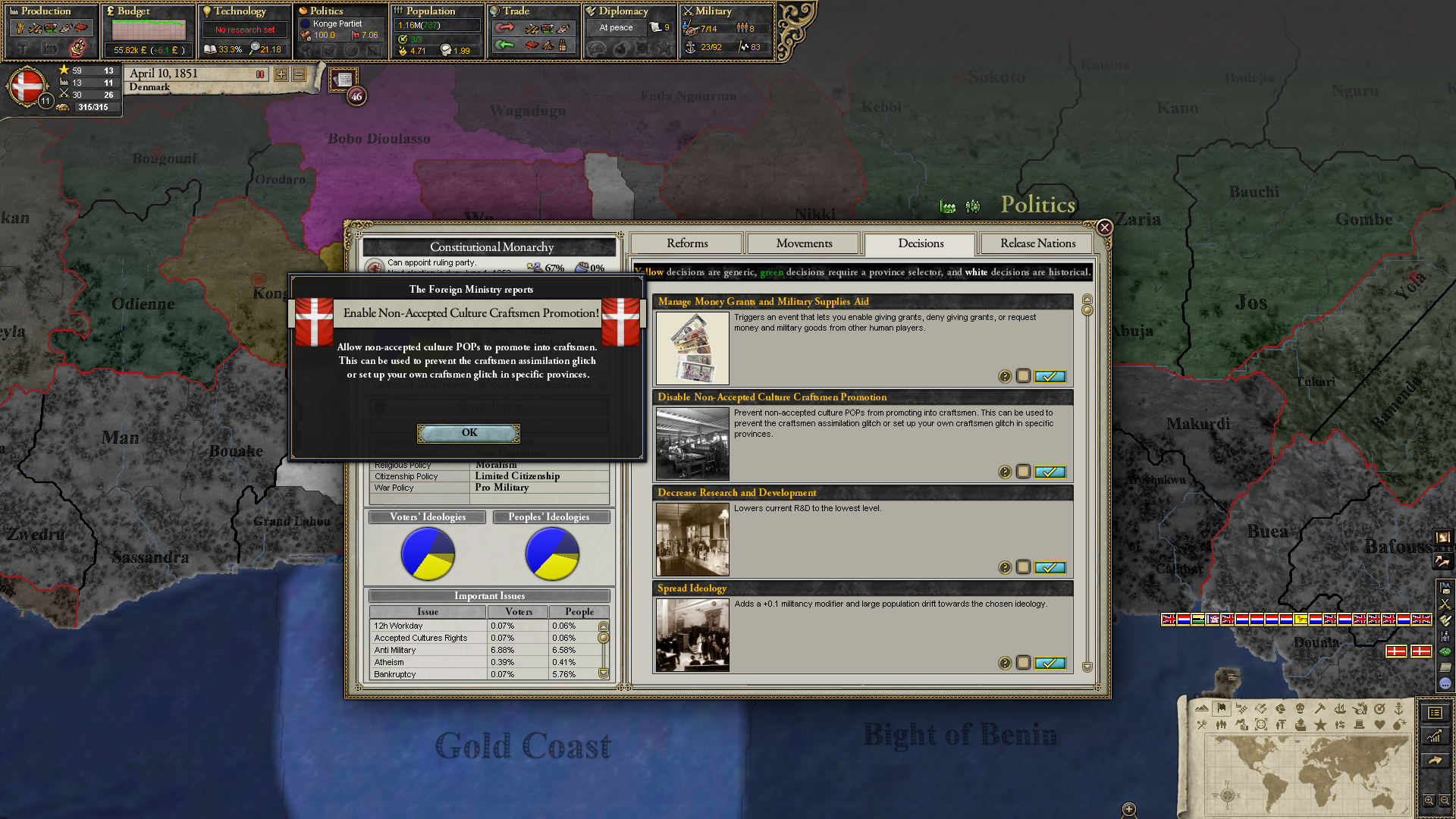 The sixth development diary of RC&C contains Russian Warlords, the Hindustan interactions, and a look at the approaching-completion of the Lotharingia/Spain/Italy...

The entirety of the mod's content regarding the Most Serene Republic of Venice and Greece has been reworked - all outcomes that used to depend on RNG...

More Information about the mod and what it features.

Progress Update 5: YOU'RE GOING TO BRAZIL

Welcome to the Second version of the Greater Proyect Mod! The goal of this mod is made the best gameplay experience with a potato computer, I mean, with...

This adds more custom party names etc and also enjoy the mod and leave me some suggestions thanks!

1.1 version of the Moon Map Mod graphical mod for Victoria 2

The Frist Version Of This Fantastic Mod!

The Minion mod adds The Minion Kingdom custom loading screen and also custom name parties preserve the presence of the minions and expand it to the entire...

There are many revolutions and the revolutionaries have more morals than the army itself [= ^ · <· ^ =] but the mod was very fun, I still don't know English, maybe it was because of some decisions I made without understanding it well.

Hi how are you, friends, I'm a Hispanic in love with this game, but I can't have mods because my version is old and I don't have the DLS or the pack either. can someone help me update the game?

Tags
Embed Buttons
Link to Victoria 2: Heart of Darkness by selecting a button and using the embed code provided more...