As part of a classified strike team created to deal with threats no one else can handle, your mission is simple: Eliminate the intruders at any cost. Determine the origin of the signal. And contain the crisis before it spirals out of control.

F.E.A.R. is Monolith's ultra-high, gorgeously stylized horror game putting you in control of a special operative on one scary operation. 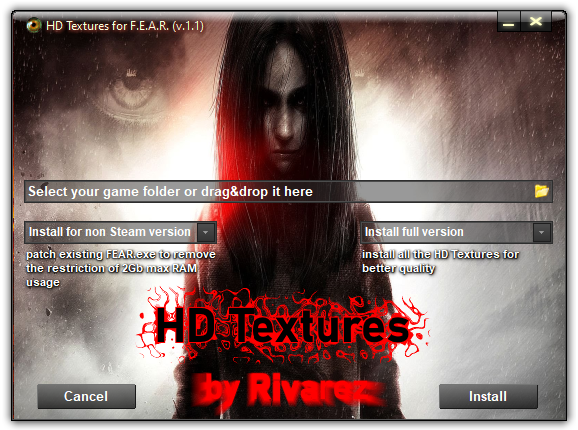 You can see a difference here (the images are clickable).

It's been a while since first release, and i truly wasn't all that impressed with first version, so here goes Version 2, a lot of fixes, a lot of enhancements...

It's been a while since last update, but as i promiced i finally pushed it to release, becuase of 2 reasons - There's nothing left to "hack" and pretty...

FEAR Resurrection - is an alternative addon to the original game.

Combines Mutilation with basic features of the Rivarez mod (with kind permission.) All credit for the latter goes to Rivarez. Does NOT include HD Textures...

The mod basically adds some more realism to the carnage. Shotguns won't explode enemies anymore, explosions are more likely to rip off body parts instead...

The mod basically adds some more realism to the carnage. Shotguns won't explode enemies anymore, explosions are more likely to rip off body parts instead...

Happy Halloween, fans of F.E.A.R.! Here is an idiotic mod make by yours truly. -- WARNING -- THIS MOD IS INTENTIONALLY STUPID, SLEAZY AND SLOPPY AS A...

This is HD Textures for F.E.A.R. Read more for details.

Happy 15th Anniversary, F.E.A.R.! To celebrate the occasion, here is a preview of something that's in the works. WARNING! This mod is stupid and intentionally...

Real sad to see the modding community die down. Feels almost like F.E.A.R. is gonna hit some kind of obscurity sooner or later...

Monolith needs to release the source code so the community can at least breathe some new life into the game. Fixed multiplayer with the game, coop support, modern hardware support, bug fixes, proper widescreen support, and so on.

Everything that you have mentioned is fixed already i think. Anyway, there are several FEAR modding communities on discord, facebook and other sites. Here is one with modding channel Discord.gg.

Forget the other games continue from the Expansions

Almost the end of 2015 and I'm still enjoying playing this game.
Too bad F.E.A.R. series ended with that disaster of F.E.A.R. 3.

Hopefully one day,there will be a F.E.A.R. 4 that will bring back the good old F.E.A.R. horrors and atmosphere,the combat and the destruction effects,a new stunning horror story.

I think F.E.A.R. should've been an anthology Horror Series where the organization tackles different paranormal or supernatural threats throughout each Game.

Like imagine a F.E.A.R. Game where you fight aginst Lovecraftian Monsters.

when the elevator dropped me into the pool of blood, i wasnt scared, but i was legit freaked out and completly confused, then the hallway... that ******* HALLWAY

I cannot thank Monolith enough for their first installment in the series. Incredible atmosphere thanks to detailed, haunting environments with a creepy soundtrack. There are many jumpscares, but at the same time you never feel really safe. I'm easily frightened though, so I can't really say how scared you will be. The story is enjoyable, but not exactly the main reason you play. The gameplay is really funny, with dismemberment, slow motion and very intelligent enemy AI. Most of the arsenal makes…