Tired of shooters that make you reload, aim down the sights, and hide behind boxes like a spineless coward? Reliant on heartbeat detectors, regenerating health and killstreaks? Feel like something is missing from your life, shortly before a 13 year old with a headset ends it amid a hail of slurs and profanity?

Well, get ready for a blast from the past.

BLOODCRUSHER II: KILLFIRE, sequel to the hit 1992 shooter phenomenon BLOODCRUSHER 3D, promises the most incredible action you can handle. BLOODCRUSHER II: A COMING OF AGE STORY randomly crafts stories, levels, enemies and weapons, forcing players to use both skill and caution to proceed. Build up your KILLOMETER on a global scoreboard and fill your BLOOD GAUGE for mega-maximum carnage!

With Liefeld inspired art design, Quake inspired gameplay and violence so controversial it was subject to a Congressional hearing, BLOODCRUSHER II: EXPLODE ALL HEADS EDITION will sate all your repressed murderous urges!

BLOODCRUSHER II: THE SPINEBREAKER FILES, the mega-hit of the 1997 season, is now coming to your personal computer by direct download or a 75 floppy disc set. 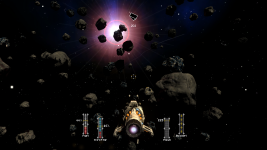 In Bloodcrusher II, it is very important to hit things. What things you use to hit these things is entirely up to you!

Badges are really sweet ways to change up the way you play the game!

A quick summary of our gameplay flow and the "meta" of Bloodcrusher II.

The future isn't so bad I guess. After all, it seems to be more than happy to be supplying the past with guns. How nice is that!

Some RA3 dead mod lead me to this dead game, very weird.

seems they couldn't finish this either

BLOODCRUSHER II: LARGE BLOOD DECAL was too good for this world

THE FIRST GRUNT ON E1M1 SEEMS TO HAVE GOTTEN IT

I believe it is high time for us to talk about
the future of BLOODCRUSHER II. Are you planning
to release the game within the present decade?

We hope to return to BLOODCRUSHER II: KNIFE IN THE STABDOMIN, as soon as possible. Right now we are focusing on a smaller project in order to ensure we can treat BLOODCRUSHER II: CONSECUTIVE NORMAL BULLETS, with the respect that it deserves.

Thanks for the response, i'm glad to hear it´s still in
the pipeline.

Is Bloodcrusher kill? Please say no. I NEEEEED this.

It's not kill, we're just busy.