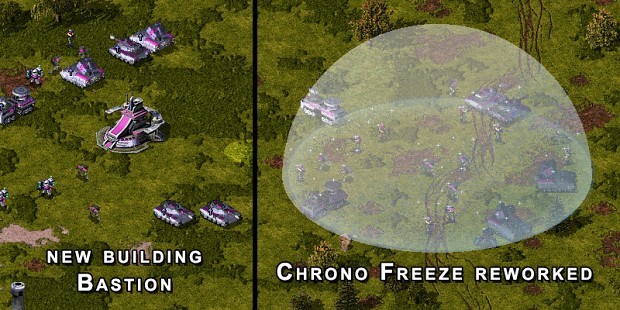 So it's kinda like SC Stasis, or EMP but a bit weaker. On the one hand, you want it for specific units that you know you need to lock down. On the other hand, it'd be nice to lock down big armies in general. Both of these niches contesting for this plus the fact that it probably won't have a short cooldown (and maybe even a cost) means it's going to initially struggle to find its place. People really weigh the idea of a negative heavier over a positive, even multiple positives. They're going to want to save it and figuring out the right time to use it so it is going to take time for the meta to figure it out.

Something that may be more apparently useful I'd like to suggest: At the same tier / requirements, provide a second one that has a much shorter cooldown but is also smaller and, if the first one costs money, make it slightly less cost-efficient. This will give players some breathing room because they'll be more willing to use more liberally the faster charging and cheaper (but less cost-efficient and smaller) one so they'll still get the effect that this Support Weapon gives but can still save the bigger one for later.

I don't really see the value in hypothetical "would it be useful/wouldn't it be useful" conversations, I go by experience. So far since it has been it added it has been used quite a bit, and everyone is able to try it themselves as the playtest is publicly available on discord.

The time / cost involved is the same as most T4 powers. Because the bubble lasts quite a while, it is very useful for zoning out an army or controlling a position as well. Anything that walks into the area when it is active is affected by it, not just the initially targeted units. It's also rather useful in defence if you need to buy time for reinforcements or something.

So far it has proven to have tonnes of value.

one should also note that the chrono freezes "units become immune to most outside attacks" is to be technically understood as a massive armor buff. this means that normal damaging weapons indeed wont do anything to the affected units, but some special weaponry still retains its full effect on the frozen units. namely mind control, hijacking or the valkyries "34% of the targets max hp" damage formular.
combining those weapons with chrono freeze is utterly devastating as teh enemy wont be able to prevent it with most of their units stuck in the bubble. believe me, its afr form limited in use

I don't think this is a bad or not useful superweapon. More experienced players can get it and use it properly and effectively, but I just think that a larger more casual playbase will have no idea *how* to use it properly or the way you intended for it to be used.

My concern is not that it isn't useful or good. My concern is that more casual players won't know how to use it. It's not that it isn't good. It's that it *is* good. Its that it's *too* good. It's too good to use. You only get one every time it finishes recharging, but it has a lot of value. I know that more experienced C&C (and StarCraft) players will more or less know how to use it right off the bat, but casual C&C players (and they *do* exist and there *is* a lot of them, I'd say I'm reasonably casual) won't know how to properly use it.

A casual player's instincts is to save it because it is their understanding that the longer they save it, the more value they will get out of it. This is a basic fact you can see in virtually any kind of game, but most-notably in RPGs with super rare or 1-time use equipment, items, or abilities. This is not how you want to use this superweapon, though. In fact I'd say probably the exact opposite is true about it, the longer you save it the *less* value you get out of it (but that's a completely different topic). But this goes against core instinctual behavior that games tend to encourage you to do with design like this.

When you look at the vanilla SWs, the Weather Storm and the Nuke, these pretty upfront do a lot of damage and that's it. So their usage is extremely simple. They take some time to go off, so generally you just use it to damage infrastructure. You can't really think that way with this Superweapon, though. There is a lot of tactics involved in its usage. You can use it in so many ways and there's so many important and useful ways to use it, but the problem is that's not how a casual player will think about it. They will think to save it as long as possible to use it on as big of an army as possible, and they won't even consider that new units could walk into it without the enemy noticing. They don't think about the wider array of usage. So, my suggestion was a smaller less effective but much more readily available version for casual players that has much less value but can be used more frequently, thus encouraging them to experiment with it more because they don't have to worry about making sure it's as cost-efficient of a use as possible when they use it becaue they'll be able to use it again sooner. And this gives more experienced players even more value out of the mechanic that they can abuse.

*My* experience is nearly a decade of hardcore game design, design overanalysis, and theory across several genres other than just RTS as well as a little bit of formal education and training. So, I don't really see why bringing that up was relevant or important at all. I have a pretty reasonable understanding about what I'm talking about. My approach is more Nintendo-y, it's about predicting and controlling the mindset of the player so they use the things you spent time and effort on making and that you want them to use.

I wasn't refering to your design experience, I was refering to practical experience of how it actually works and is used ingame, not just theory.

I also strongly do not think everything ought to be thought of in relation to casual players. It's still a YR mod, so most of it is pretty casual already. *Some* things need to be more advanced to make it interesting, to give players something to improve at and reward the most skillful plays.

Casual players do not have to use everything, but if they do and do so well they'll be rewarded. If it takes time for people to figure it out, that's a good thing IMO. There is more value in long term investment. People can always do the usual C&C thing of playing with tank blobs in the meantime.

I can respect that. IMO there is already plenty of ways to be like that in this game just due to the way its mechanics work, but that's fine if that's how you want it to be approached.

Sorry to be a little snappy there.

the building is so cool and badass

Next patch, the European Federation are one of the countries to get a slight rework, following on from last patch's adjustments.

-- A new structure, the Bastion. As a union of many nations with extensive borders, Europe always has the threat of crime, terrorism, political dissent and communism looming over it, and so merges many law enforcement and military doctrines into one. The Bastion is first a logistical structure, keeping watch of the local area and buffing the armour of nearby friendly vehicles by ensuring they are well armed and informed of enemy maneuvers. Furthermore, the Bastion can arrest enemy units that come into its vacinity, storing them inside it's chrono prison. Trapped units can be freed if the Bastion is destroyed, or intentionally released to be mopped in a more controlled fashion.

-- The Chrono Freeze has been removed from the Warp Node, and instead made the T4 power (replacing Plasteel Injection). Now it is targeted anywhere on the battlefield and freezes anything that enters the chrono bubble. Trapped units are unable to do anything, but also become immune to most outside attacks. Chrono units such as the Legionnaire are able to enter the chrono bubble unaffected.