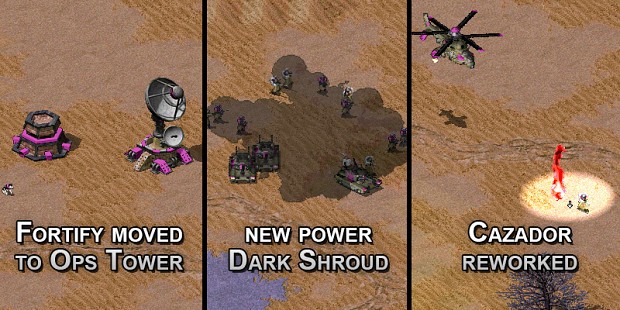 Next patch Confederation are one of the countries to get a slight rework.

-- Fortify is moved to the Ops Tower. This makes it available much earlier in the game, allowing for greater use of it. It can now be used to contain an enemy for a while, or help with an early infantry push.

-- New support power: Dark Shroud. Available at the Tech Center, Dark Shroud is an airstrike ability that creates an ongoing cloud of smoke, drastically reducing the firepower of units beneath it - friend or foe. Good for area control.

-- The Cazador has been reworked. Now it should be better in combination with other units. It's previous firework has been replaced with a flare, that reduces the armour of units standing in the area. The flare lasts for some time. Furthermore, it has now been giving an autocannon, allowing it to attack conventionally as well.

You can watch a close Confed vs Russia game to see some of the changes! Youtu.be