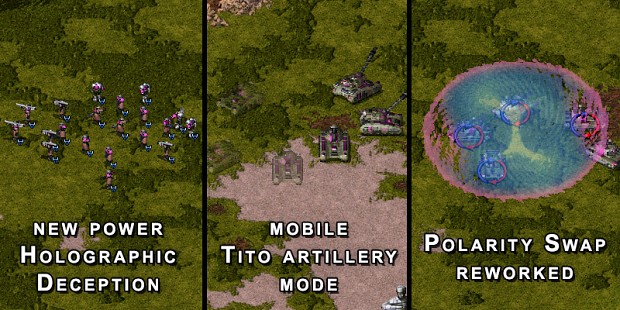 Finally, Tito Artillery mode can fire on the move.

Yugoslavia?it does not exist anymore.

Next patch, Yugoslavia are one of the countries to get a slight rework.

-- A new support power on T3: Holographic Deception. This ability creates holographic projects of Conscripts, Flak Troopers and Tesla Elites, allowing a cunning player to give the impression of possessing a much larger army than they really do. This is useful for drawing fire away from more valuable targets and manipulating the actions of an enemy in multiplayer.

-- The Tito artillery has been adjusted, thanks to new capabilities in Ares, to remain mobile while in artillery mode. The Tito still has its fast but lightly armoured stealth mode, however when it deploys it now remains mobile, making their artillery form much more potent.

-- Polarity Swap has been reworked, now moved to T4. No longer is it simply applied to units in a 3x3 area, instead of it spawns a magnetic disruption field that inverts the damage of any vehicle currently standing in the field. This allows a player to nudge the position of enemies on the battlefield with careful Polarity Swap placement, but also allows victims to escape the zone and retain the functionality of their own units.